Consistent with the past four years, Arizona State University improved its university study abroad ranking in the annual Institute of International Education Open Doors 2018 report. ASU jumped from No. 15 to No. 10 in the nation for U.S. colleges and universities with the most student participation in credit-bearing study abroad programs.

In the report, ASU also maintained its ranking as the No. 1 public university for hosting international students for its fourth consecutive year. 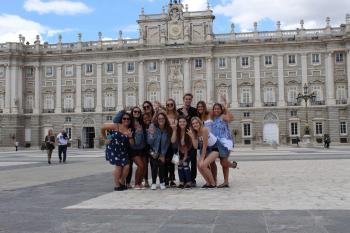 Cynthia Alaffa, a social work major, is pictured with her classmates in Madrid. She is taking part in the faculty-led University Service-Learning program in Burgos, Spain. Download Full Image

Asked about the continued growth in study abroad enrollments at ASU, Study Abroad Office Director Adam Henry expressed that it is further example of ASU’s commitment to being a global university.

“During the 2016–17 academic year (on which this report is based), 2,414 ASU students participated in a study abroad program,” he said. “This student participation rate is largely thanks to partnerships between our academic departments and our study abroad office that focused on helping students understand the value of studying in another country. Study abroad is very much a part of the ASU culture that thrives on global engagement.”

“Additionally, being in the top 10 is an incredible feat considering just five years ago we were unranked,” Henry said.

Cynthia Alaffa, a social work major, traveled to Spain through ASU’s study abroad program and said the experience allowed her to work with populations she had never worked with before.

“As a social work student, we are taught that it’s not about us, it’s about making sure our clients’ needs are being met,” she said. “Being abroad, I was able to listen to many stories and perspectives. Not only was I able to gain travel experience, I learned about different social work practices of professionals in another country."

In addition, Open Doors 2018 shows that the profile of U.S. students going abroad continues to diversify. The number of students who identify as racial or ethnic minorities who studied abroad in 2016–17 was 29.2 percent. In 2005-06, racial and ethnic minorities accounted for only 17 percent of the study abroad population.

Outpacing the national average, 37 percent of ASU students studying abroad in 2016–17 identified as racially or ethnically diverse, including 21 percent identifying as Hispanic or Latino/a.

ASU is committed to creating flexible options for all campus-based and online students interested in studying overseas. Most recently, the Study Abroad Office launched short-term program options during semester sessions A and B. This new option allows students to study abroad for six to seven weeks and then return to complete the other session in-person or online.

“To become a master learner in the 21st century, our students need global experiences,” said Mark Searle, executive vice president and university provost. “Traveling, experiencing new cultures, and building relationships with people from other countries are skills that are critical to our shared future.”

The Study Abroad Office at ASU offers more than 250 program options in more than 65 countries, with program lengths ranging from one week to one year. Financial aid and scholarships are available for students who participate in semester and yearlong programming.

“I believe this experience also helped me to explore more and get out of my comfort zone,” Alaffa said. “I learned it’s OK to be lost sometimes because in the end you find your way no matter what. Overall, this journey brought me many memories, amazing support and many new long-lasting friendships as well as growth within myself, personally and professionally.”

Arizona State women's volleyball is back in Wells Fargo Arena this weekend to face No. 25 UCLA on Friday and No. 14 USC on Sunday. ... Arizona State women's volleyball is back in Wells Fargo Arena this weekend to face No. 25 UCLA on Friday and No. 14 USC on Sunday.