The near-term future of Earth is one of a warming planet, as urban expansion and greenhouse gas emissions stoke the effects of climate change. Current climate projections show that in U.S. cities temperatures are expected to rise by 2 to 7 degrees Celsius (3.6 to 12.6 F) by the year 2099.

To try to adapt to this warming and maintain livability on the planet, researchers are looking into new ways of designing and building cities with climate-mitigating technologies and finding that as their predictive models increase in sophistication, they are unveiling a complex interdependency of effects. 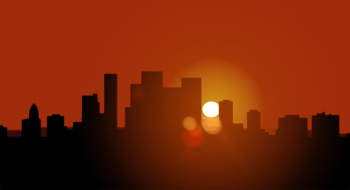 For example, new modelling is revealing the dynamics of climate change and urban sprawl on a more detailed level, leading to a new understanding of what might be in store as cities grow and regions warm. This information could be critical in determining what might or might not work as we try to adapt to the coming heat.

Now a team of researchers led by Arizona State University have completed some of the most sophisticated modeling of the effects of climate change and urban centers in the U.S., and they are finding that some of today’s proposed solutions will provide only a fraction of relief from the projected heat.

The researchers looked at the daily interaction between urban expansion, climate change and adaptation in the U.S. through the 21st century. Their analysis revealed a nonlinear interaction between urban expansion and greenhouse gas emissions that did so over a large expanse of land — the continental U.S. — paying particularly close attention to growing megapolitan areas. Then they examined a spectrum of heat-mitigating strategies that included street-level trees and engineered solutions that tackle the urban heat phenomenon.

“Previous studies have shown that conventional strategies to reduce warming work primarily in lowering daytime rather than nighttime temperatures,” said Matei Georgescu, an associate professor in ASU’s School of Geographical Sciences and Urban Planning. “However, cities tend to have their greatest impacts on the regional thermal environment during evening and nighttime hours.”

“We simulated the effects of conventional heat-mitigating approaches with more widely recognized cooling strategies, but we also simulated impacts associated with engineered materials on near-surface temperature,” he added. “We found moderate alleviation of temperatures during nighttime hours using low-thermal-admittance materials.”

The researchers published their findings in “Diurnal interaction between urban expansion, climate change and adaptation in 21st-century U.S. cities” in the early online edition of Nature Climate Change. Co-authors are E. Scott Krayenhoff of the University of Guelph in Ontario, Canada, who was a postdoctoral researcher with Georgescu at ASU, and Mohamed Moustaoui, Ashley Broadbent and Vishesh Gupta, all affiliated with the Urban Climate Research Center at ASU.

The new research takes an analytical look at the continental U.S. and does so at a greater level of sophistication than previous studies. For example, past studies assumed the effects of urbanization and greenhouse gases could be determined by simply adding the effects of the two together. The new approach allows the researchers to characterize the extent to which these two factors in regional climate change interact with each other nonlinearly.

“The effect of urban development and greenhouse gas emissions is less than merely the sum of the individual components,” Georgescu said. “This is only evident during nighttime hours. The magnitude of the nonlinearity reduces the total warming by up to 1 C (1.8 F) locally.” But, he cautions, “we need to remember that this is considerably less than the total warming itself (from 4 to 8 C, 7.2 to 14.4 F) depending on the GHG scenario simulated.”

In addition, Georgescu’s team drilled down into the data. Previous work used the 24-hour average temperature of each day as a data point. In this research, the team produced significantly more data (roughly 100 terabytes) via computer simulations made on the high-performance supercomputing clusters available at ASU and examined impacts across a 24-hour, or “diurnal” scale, in three-hour intervals.

“Making this data available to the research community will enable related research such as biometeorological assessments from health researchers and energy assessments from the building science community,” said Scott Krayenhoff, lead author of the study.

What is revealed in the modelling is a warming continent, especially in the regional urban centers of the U.S.

“Summertime urban warming resulting from a dynamically interactive combination of urban expansion and climate change is 1 to 6 C (1.8 to 10.8 F) in the afternoon and 3 to 8 C (5.4 to 14.4 F) at night by the end of the century,” team member Moustaoui said.

Overall, the simulations projected that afternoon urban warming will be more pronounced in the Eastern U.S. and nighttime warming will be strongest in the Appalachian, Great Lakes and California Central Valley regions, largely as a result of urban expansion in these regions.

The researchers then simulated how various heat-mitigating technologies would perform given the projected higher regional temperatures. These technologies include cool roofs, green roofs and street trees, all of which can be used to alleviate the near-surface outside temperatures of an area.

Adapting to the heat

“Using dynamically interactive simulations, we examined multiple adaptation strategies with the aim to offset projected 21st-century urban heat,” Krayenhoff explained. “We combined high intensity implementation of cool roofs, green roofs and street trees (i.e. a full adaptation scenario) and found that it leads to 1.3 to 2.0 C (2.3 to 3.6 F) of summertime mean afternoon cooling depending on the region but less than 1 C (1.8 F) nighttime cooling. Local afternoon cooling in many projected U.S. metropolitan areas was somewhat higher, particularly in California, Texas and the Northeast.”

Even with these heat-mitigating technologies in place, simulations showed that the heat is likely to persist.

“What I found most striking was that combined, high intensity implementation of all adaptation strategies failed to offset climate change warming under the RCP 8.5 — or business as usual — climate scenario, leaving average continental U.S. urban warming of 1 to 4 C (1.8 to 7.2 F) during the daytime and 3 to 6 C (5.4 to 10.8 F) at night, and large projected increases in extreme heat days in cities across the country,” Krayenhoff explained.

“Even with substantial greenhouse gas reductions, that is, under the RCP 4.5 emissions scenario, nighttime warming remained nontrivial after full application of adaptation measures,” he added. “This means that we can build ‘cool’ buildings and plant trees in our streets and still U.S. cities are likely to become a lot hotter without concurrent and substantive greenhouse gas emissions reductions.”

"I thought it was probably the best defensive performance I've had here as a coach," said coach Bobby Hurley. ... "I thought it was probably the best defensive performance I've had here as a coach," said coach Bobby Hurley.