These are well-known consequences of economic development threatening human and ecological health. International efforts to mitigate these threats are also familiar, including reducing greenhouse gas emissions, protecting endangered animals and cleaning our air and waterways. 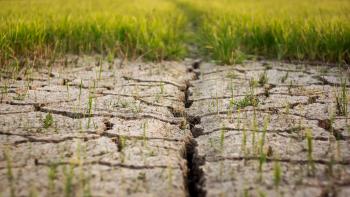 However, perhaps the most crucial threat is also the most neglected — land degradation.

Approximately 1.3 billion people depend on polluted or degraded agricultural land. This leads to reduced agricultural productivity and access to water and increased carbon emissions. It is a complex problem with serious implications for food security, health and sustainable development.

Arizona State University and Conservation International are working together to solve it.

On Oct. 17–18, ASU and Conservation International unveiled a new tool designed to help decision-makers understand the type and extent of land degradation in a given geographical area and the costs and benefits associated with specific policy interventions. This tool was designed by the Decision Theater and visualized across their immersive, seven-screen environment.

”The Decision Theater environment allows groups with multiple perspectives and anchored positions to objectively examine the trade-offs of different outcomes,” explained Rahul Salla, Decision Theater associate director and technical director. “Interacting with the model in the Decision Theater, they can make their own discoveries as they investigate possible futures, leading to more informed decisions.”

For several months, the software developers and program managers at Decision Theater worked hand-in-hand with Conservation International experts to design and build this tool. The interactive data visualization integrates information derived from Trends.Earth, an existing tool funded by the Global Environmental Facility and already used by 146 countries to analyze land changes.

The Decision Theater convenes decision-makers in a collaborative, visually immersive, information-rich environment. The objective is to create better, more informed decisions involving complex problems. They model, simulate and visualize data from disparate sources to provide a complete vision of a problem and the system surrounding that problem.

“The experience of the DTDecision Theater team made it possible to build a tool integrating massive quantities of data needed to identify areas for restoration in a visualization that is still usable and accessible to nonexperts,” said Alex Zvoleff, Conservation International senior director of resilience science. “This allows users direct access to both the underlying data, as well as the simplified summaries and cost/benefit calculations that are necessary for decision-making,”

This tool was presented before a collection of Conservation International board members, industry leaders and philanthropists at the ASU Barrett and O’Connor Center in Washington, D.C. An ASU-hosted reception immediately followed.

“This is a prime example of how a nonprofit organization and a higher education institution can work together to craft solutions,” said Amy Scoville-Weaver, ASU-Conservation InternationaI relationship manager. “By pooling our scientific expertise and leveraging our own strengths, we are able to work together to create something new with direct implications for change.”

The United Nations Convention to Combat Desertification — to which 196 countries are signatories — is committed to achieving land degradation neutrality, or stable or improved land health, by 2030, a goal that requires a combination of avoiding and reducing land degradation and restoring degraded lands. ASU and CI will continue to work together to explore suitability and applications of the Trends.Earth and Decision Theater tool to support countries in achieving this target.

ASU has partnered with Conservation International since 2016 to make measurable advances on conservation and to train the next generation of conservation leaders. For more questions on the partnership, please contact Amy Scoville-Weaver. 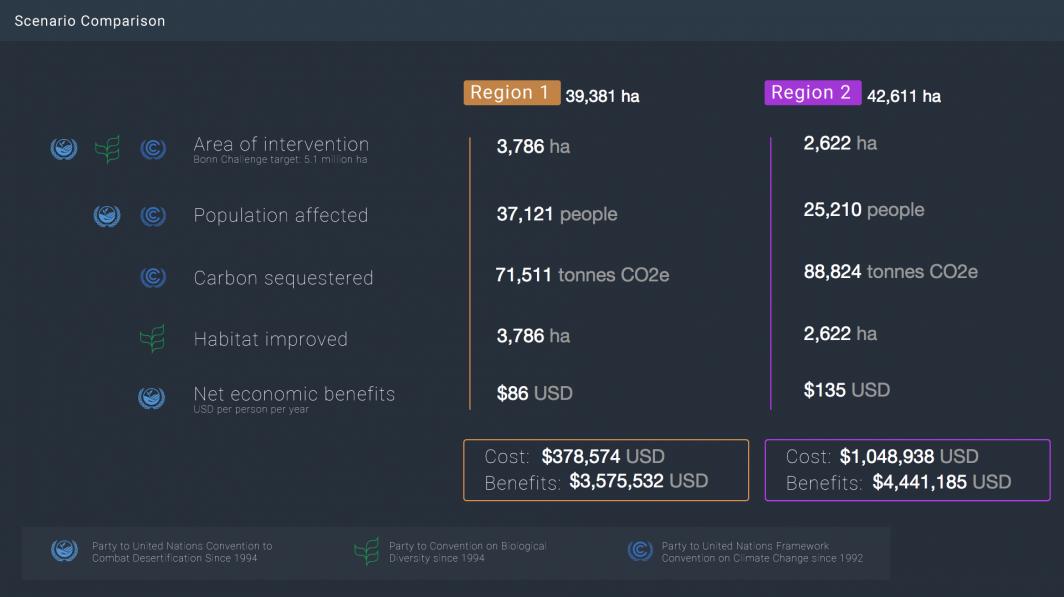 A screenshot from the seven-screen tool. 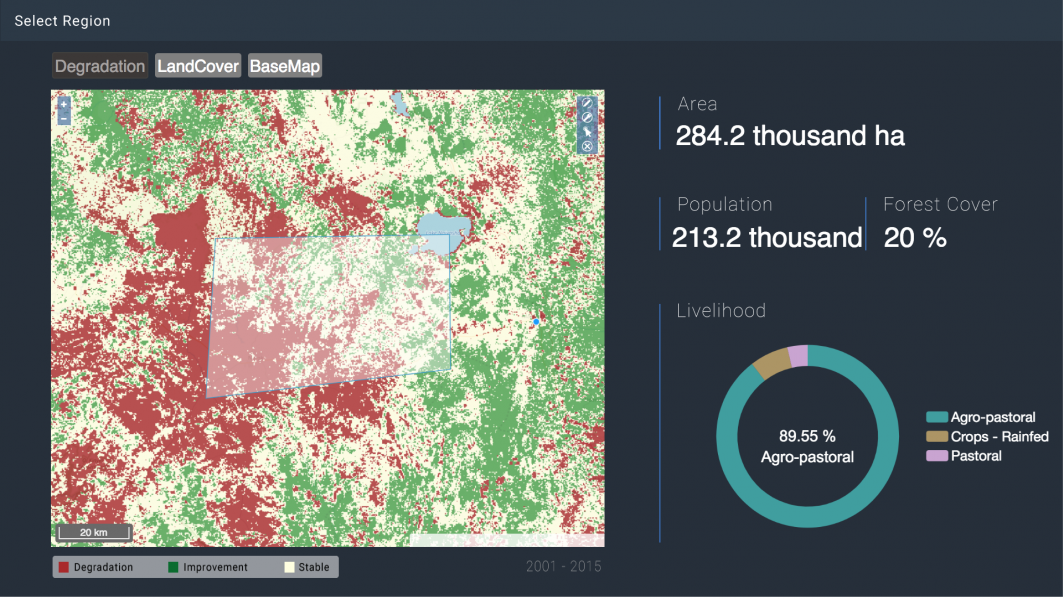 The tool enables decision-makers to understand the kind and extent of land degradation in a geographical area and the costs and benefits associated with specific policy solutions. 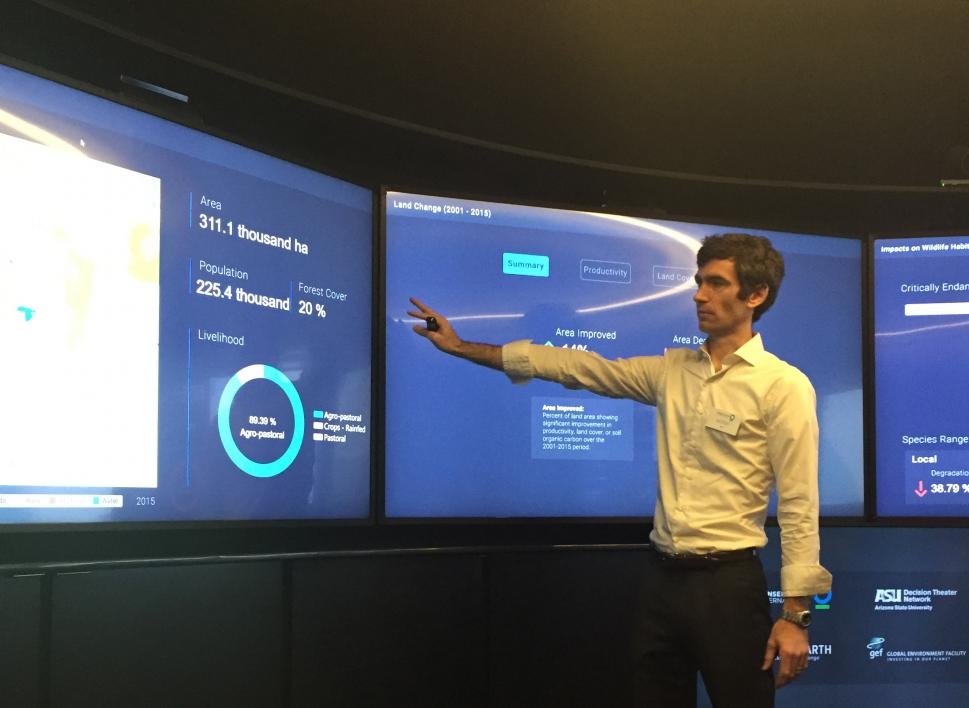 Military personnel are often thought of as strong, adaptable and resilient men and women who make great sacrifices to protect our country.While we shower our service members with praise and thanks, the families and loved ones who prop them up and support them during their careers often get overlooked.But a class at Arizona State University looks at the culture and resilience of military families a... 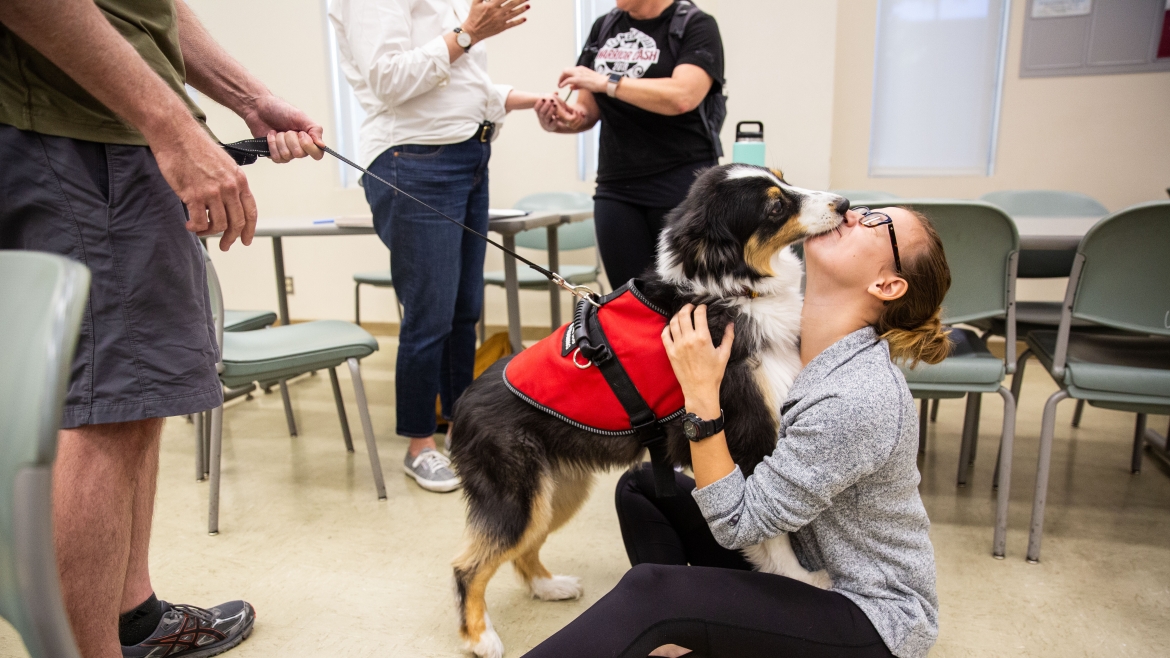 Military personnel are often thought of as strong, adaptable and resilient men and women who make great sacrifices to protect our country.

While we shower our service members with praise and thanks, the families and loved ones who prop them up and support them during their careers often get overlooked.

But a class at Arizona State University looks at the culture and resilience of military families and the challenges they face through civilian transition, deployments, traumas or death.

“There’s a lot of issues that military families have to deal with, but there’s also a host of other things most don’t know about,” said M. Jennifer Brougham, an instructor in ASU’s T. Denny Sanford School of Social and Family Dynamics. “Everybody has different views about the military, but very few understand the actual struggles and complexities.”

That’s why Brougham created FAS 410: Military Family Systems in a Democracy (also refered to as Working with Military Families). As a former Army wife, Brougham said that based on some of her experiences, she understands the intimate challenges that military families face.

“I was married in 1970 to a second lieutenant in the United States Signal Corps, and three days later we went to Kaiserslautern, Germany,” Brougham said. “When we were over there, we didn’t have any base housing and so we lived in a remote German village. Talk about a culture shock.” 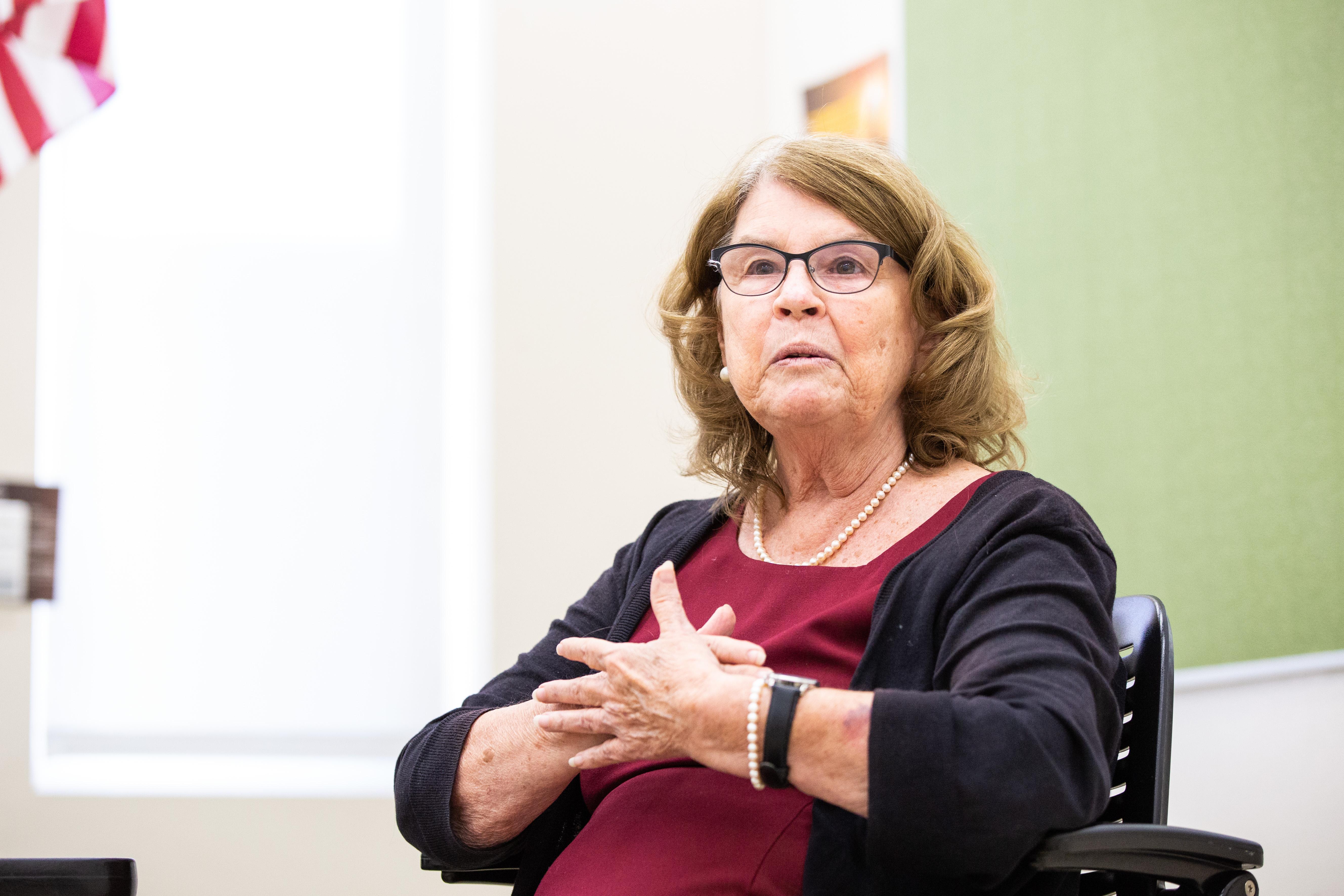 It’s that mix that makes the class special, said one former student.

“I went into the class with a number of biases,” said Charlie Blotner, who completed the course in 2016 and was one of the first students to receive a certificate for the program. “I did not grow up knowing much about the military and did not feel that I had a personal reason to learn more. I quickly realized how wrong of a stance that was to take and how important it was to be informed.”

Blotner, currently a second-year master of social work and health practice student at the University of Washington, said learning about families during deployment — the change in parental dynamics upon returning home, frequent school changes for children and the psychological impacts of these issues — particularly resonated with him.

“Military families are everywhere, and ignoring their specific traumas and needs would make me an unethical social worker,” Blotner said.

Blotner’s unfamiliarity with the military is not an anomaly. Ever since the United States switched from a draft system to an all-voluntary force, the public has become less familiar with service life. In fact, about eight out of 10 veterans say the American public doesn’t understand the problems faced by those in the military and their families.

“The biggest issue facing military families today are long deployments, and that was something we didn’t even go through in Vietnam,” Brougham said. “A friend of mine who is a lieutenant colonel and in nursing has five children … was never expected to get called up to serve overseas. She had to scramble to figure out how she and her husband were going to manage their household while she was away.” 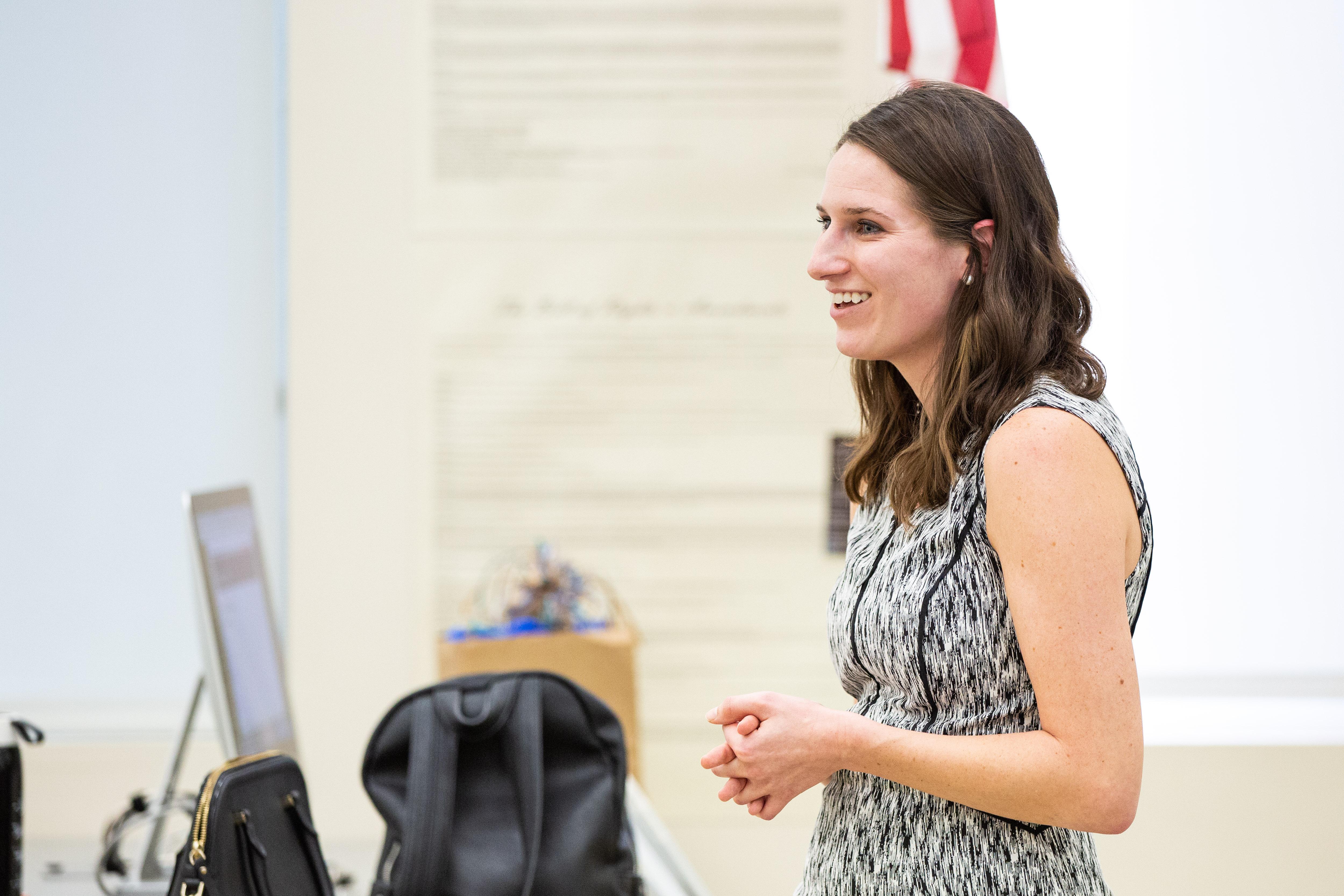 Communication graduate student Alaina Veluscek introduces her research on military couples and affection during deployment. Her work focused on how writing could improve the satisfaction of relationships during deployment with naval officer families. Photo by Deanna Dent/ASU Now

“Military families are under a lot of stress,” said the Air Force ROTC commander at ASU and a guest speaker in the class. “They’re constantly moving, their kids are constantly changing friends, and (they) are struggling to make ends meet.

He said a lot of the young airmen with families are on welfare because their income is low, and their salaries can’t cover all of their expenses. He said they often have to rely on the community and the military for support.

“A lot of them are just poor and they struggle,” Padbury said. “Some of them are afraid to ask for help and don’t know what’s available. The military is very good about educating these young families and getting them plugged in.”

Padbury said he sees great potential in Brougham’s students because they’ll be the ones offering support, guidance and counseling to military families.

Teaching the value of the support system

The dual class/certificate program took Brougham three years to develop. She learned of professional needs with military families at a conference on a military base and began dialogue and instruction with students in her Marriage and Family Growth courses. She then began discussing the needs of the families with ASU ROTC commanders and wrote a proposal in 2013 for a course in the Sanford School.

The program debuted in the fall of 2016 and this semester has doubled in size. The person responsible for greenlighting the class was Patrick J. Kenney, dean of the College of Liberal Arts and Sciences and a Foundation Professor in the School of Politics and Global Studies.

“A lot of times our faculty resonate directly with what they’re teaching, and in this program you have an instructor who has walked the walk,” Kenney said. “She was in a military family much of her life, and you can just feel it. There’s a passion and an experience there.”

Brougham has done some enlisting of her own for the course, recruiting Army Lt. Col. James Sink and Navy Capt. Andé Bergmann to impart their experience to the class this semester. 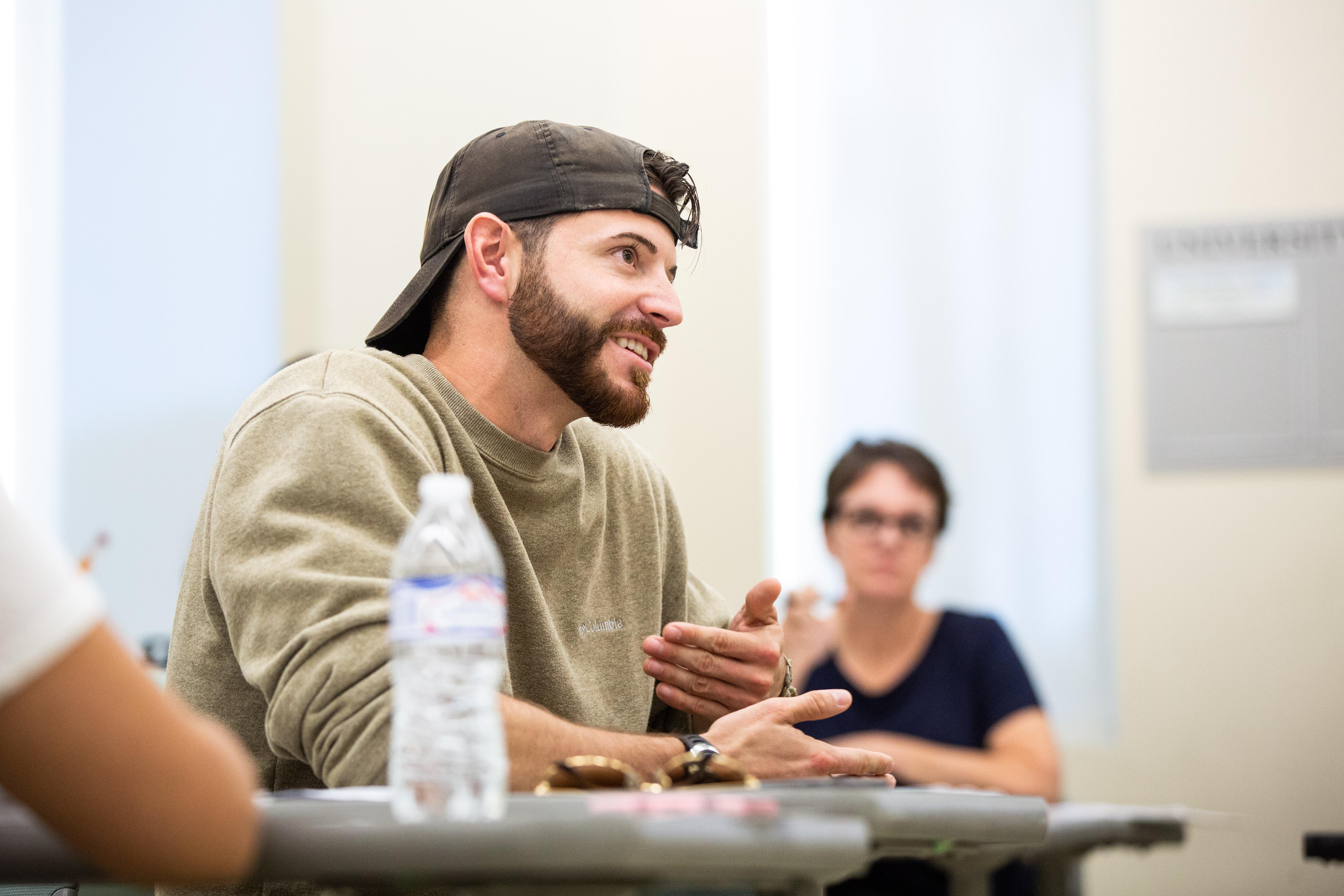 “The military has the ability to put very young people in a very intense leadership position early on, where in a traditional place of employment you come in very junior,” said Bergmann, who was in charge of approximately 330 people during one job tenure on a ship.

The other myth she’d like to dispel is that the military is secretive.

“We’re not a secretive organization because we really don’t have anything to hide,” Bergmann said. “We are open and transparent in the decisions we make and what we do going forward.”

“It’s like having a permanent guest speaker in the class because they can share that veteran perspective,” Borden said. “They still want to serve their communities and particularly want to help veterans.”

Borden could have been talking about Amanda Lewis, an Army reservist who has been deployed three times since 2007. She’s taking the class because she thinks it’ll enhance her next career as a marriage and family therapist for military couples.

“The military has helped me through two marriages, two divorces, and the military has always been there for me, whereas most people haven’t,” Lewis said. “It’s my goal to work with the veteran population, who are underserviced and misunderstood.”

Lewis said people who go into the military know they will have complex family issues and need support for them and their children from an understanding population.

“When people come up to me to thank me for my service, and if I’m with my children, I usually turn to them and say, ‘You can thank my kids because they’re the ones who sacrificed, not me,’” Lewis said. “This course has solidified what I’m going to do with my future.”

Top photo: Sam Muzzupappa, a senior in psychology, gets a kiss from Ellie, Navy veteran Keith Ender's service dog, after the Oct. 24 class on working with military families. Photo by Deanna Dent/ASU Now