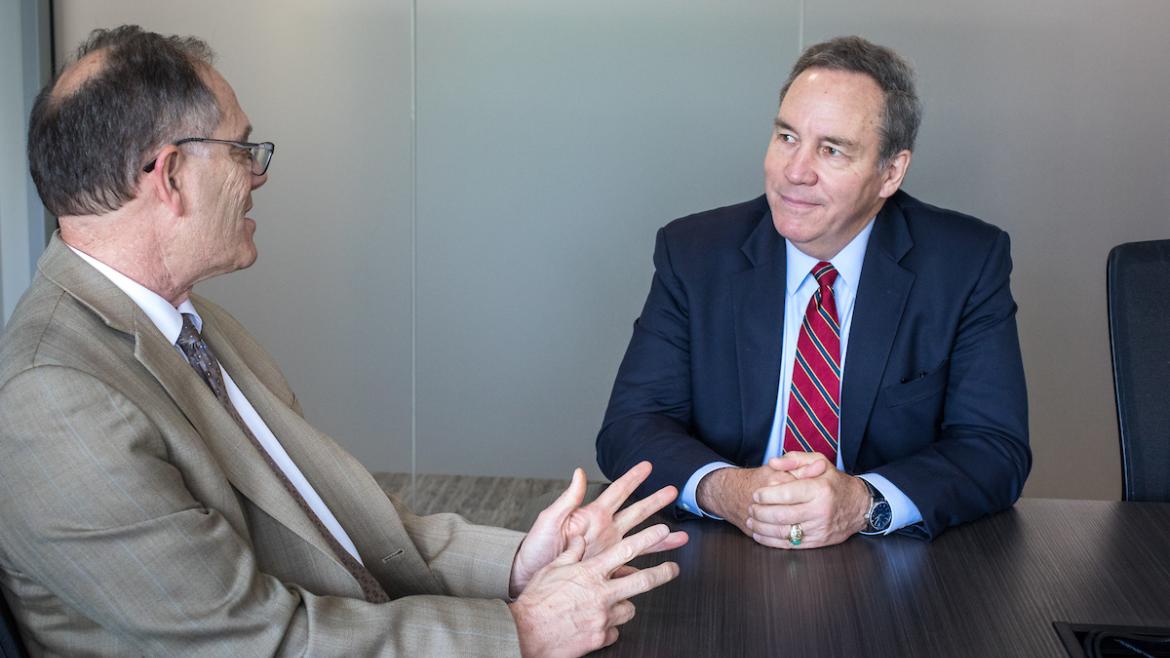 Arizona State University has a secret weapon: Distinguished military leaders who have served at the highest levels at home and abroad advise President Michael M. Crow on matters of national significance or importance.

“It’s a great opportunity to bring to the university … all our operational knowledge from the military,” said retired Army Lt. Gen. Benjamin C. Freakley, a former commanding general who is now a senior adviser to both Crow and the McCain Institute for International Leadership. “We are racially diverse, gender-diverse, academically diverse and are global citizens because we’ve served around the world … we have remarkable leaders and we’re all trying to provide an excellent setting for our students to learn and grow.”

Tapping into a wealth of experience

Created in 2014, the council meets at least yearly and includes 14 active-duty and retired military generals from the U.S. Army, Marine Corps, Navy and Air Force.

These leaders have served to combat terrorism, respond to natural disasters and defend the homeland. They have also developed strategy, led diverse organizations and worked with national and international counterparts to address the nation’s most complex and critical problems.

Freakley said the military spends years grooming men and women to become an admiral or general, and at the peak of their careers, they are often forced to retire.

“ASU is now the beneficiary because these men and women still want to serve and they bring a body of practice that can’t be found in textbooks,” Freakley said. “They want to stay active and they want to give back.”

The leaders work with selected centers and institutes at the university such as the Center on the Future of War, the Global Security Initiative, the Center for the Study of Religion and Conflict, the Pat Tillman Veterans Center, W. P. Carey School of Business, the Public Service Academy and ASU Athletics.

They produced a document for the National Security Council that was featured at the Future of War Conference in Washington, D.C., in March 2017. The document suggested several ways to address future conflicts through political, diplomatic, economic and informational power.

“The ASU Flag Officer Advisory Council is an extraordinary and innovative idea and have assisted our center by providing advice and guidance on programming and educational programs,” said Daniel Rothenberg, a professor of practice who co-directs the Center on the Future of War with CNN senior analyst and ASU faculty member Peter Bergen. “They have helped us enormously by making sure our work is informed by their many years of diverse command experience. We use interviews with members of the council in units on leadership in our online MA in global security. And, one former member, Lt. Gen. Robert Schmidle has joined our faculty and is a core member of our team.”

The council isn’t just limited to curriculum designed for the military. Their influence is far-reaching, as evidenced by their recent interaction with two ASU colleges.

“We see using their expertise in many ways because — this is coming from the council — they wanted to engage the university in a more meaningful way rather than just visit and provide high-level advice,” said Patrick J. Kenney, dean of the College of Liberal Arts and Sciences and a Foundation Professor in the School of Politics and Global Studies. “They really want to get into the nitty-gritty.”

“It’s an exciting possibility and we’re just starting to implement some of the ideas,” Kenney said.

Retired Marine Corps Lt. Gen. Carol A. Mutter wants to get into the heart of the matter with students. She served for 31 years and was the first woman in the Marines to be promoted to both major general and lieutenant general. Mutter said she joined the council because it was an opportunity to assist a university doing great things for leaders of tomorrow.

“Those who serve in our military learn the lessons that can be helpful to other young people,” said Mutter, who has served on the council since its inception. “We have many veterans continuing to serve in the reserves while going to school who face special challenges. And many veterans of the recent conflicts need help in returning to an academic environment. They can and will make terrific contributions to this nation in the future with some understanding and assistance.”

Retired Army Lt. Gen. Robert Dail was the senior military logistics professional in the Department of Defense when he retired in November 2008 after 33 years. He’s currently working with the W. P. Carey School of Business on curriculum for defense logistics that involves several major companies and small businesses throughout Phoenix. He said he joined the council because of ASU’s strong vision.

“ASU is producing leaders who will not only serve in the armed forces but will lead companies that will support them, educate its members and families and lead our public institutions,” Dail said. “The council is one of the many resources that ASU should use as it moves to achieve the vision of the New American University.”

Retired Marine Corps Lt. Gen. John F. Goodman “enlisted” with the council because it was a way to reconnect with his alma mater. Goodman graduated from ASU in 1970.

“I’m at a time in my life and career where it’s time to start giving back,” said Goodman, who was a starting quarterback under legendary coach Frank Kush. “I’ve been lucky enough to have good mentors and be there to help answer questions. I thought it was long overdue for me to take that responsibility, particularly toward the next generation of young Americans.”

In addition to being an advisory group to President Crow, Goodman says the council helps frame big ideas across all disciplines and brings them to scale for the more than 100,000 students attending ASU.

Former Air Force Brig. Gen. Linda R. Medler, one of the newest council members, is bringing her years of cyber security to ASU. She said she joined because universities offer leading-edge research and take on some of our nation’s toughest problems.

“President Crow has shown a willingness to tackle these issues, particularly those requiring classified capabilities and inviduals who can work in a classified environment,” Medler said. “Those capabilities will help not only grow ASU but our state and nation in the process.”

Medler also likes the fact that ASU is a “veteran-friendly university” and has demonstrated an ability to understand and accommodate current and past servicemembers.

“Our veteran students bring a wide experience base, and can be a great resource for the university,” Medler said. “The Flag Council can also help advise and inform how best to tap into that potential.”

Top photo: Retired Lt. Gen. Benjamin Freakley (right) talks with College of Liberal Arts and Sciences Dean Patrick Kenney, in the dean's conference room, on Oct. 16, 2018. Freakley serves as the Professor of Practice of Leadership for ASU and as a special adviser to President Michael Crow for Leadership Initiatives. Photo by Charlie Leight/ASU Now

@SunDevilWGolf Through Two Rounds in Hawai’i

@SunDevilWGolf Through Two Rounds in Hawai’i