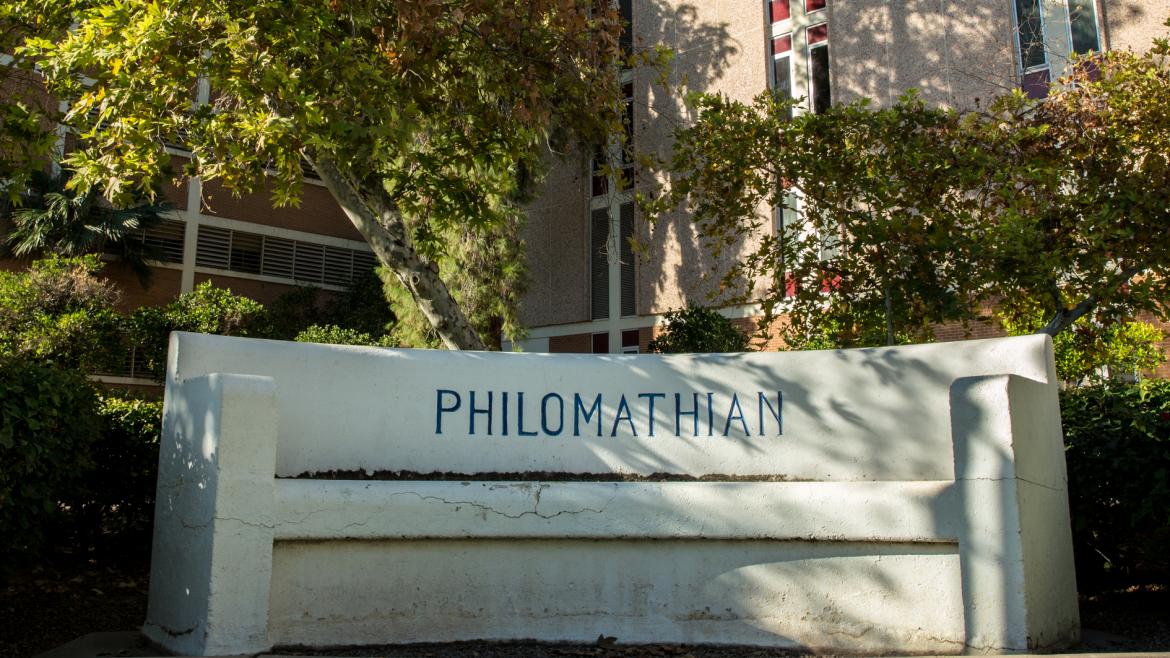 You have probably passed by the Philomathian seat more than once while walking in front of Old Main on the Arizona State University Tempe campus. It's more than just a bench: It's a symbol of the beginnings of fraternities and sororities in the history of our university.

The Philomathians (derived from the Greek philomath, which means "a lover of learning”) were one of three literary societies organized by ASU President Arthur John Matthews in 1900. All students were required to participate in one of the societies: the Alphas — for freshman students only — the Olympians or the Philomathians. During this period, the three societies competed for an annual trophy. By 1912, all three were disbanded and were eventually replaced with voluntary clubs.

The Philomathian society returned in 1921 as an all-women’s club that returned to its roots as “Lovers of Learning.” They continued to promote writing, music, oration, essay and debate for the betterment of their club members and enjoyed going on weekend camping trips and desert picnics together.

Just before the convocation of 1929, the Philomathian seat was dedicated by alumni. It has been a presence on the Old Main lawn ever since.

As time passed, the society became a sorority, adopted Greek letters and broadened activities to include dramatics, literature and social functions such as sports and music. In 1949, the Philomathian sorority was last listed in the Arizona State College annual, disbanding shortly thereafter. Since the 1950s, the Alpha Delta Pi sorority, which has loose ties to the Philomathians, has maintained the seat.

“Lovers of Learning” on the ASU campus should visit the seat every once in a while, have a sit, rest, remember the learners of the past, reflect on the present and continue ASU’s time-honored commitment to advancing education for everyone.

Top photo: The Philomathian seat sits just inside the lawn in front of Old Main on the ASU Tempe campus. It is located to the east of the Language and Literature building.

"On Your Feet!", the Broadway musical that tells the love story of Gloria and Emilio Estefan, has dynamic musical numbers that drive the show; but the story of these two determined Cuban Americans, their challenges, and their extraordinary success is also a celebration of family — all families — and the American Dream.  That was a deliberate choice on the part of the creative team: director...

The Broadway musical about Gloria and Emilio Estefan comes to ASU Gammage Nov. 6

"On Your Feet!", the Broadway musical that tells the love story of Gloria and Emilio Estefan, has dynamic musical numbers that drive the show; but the story of these two determined Cuban Americans, their challenges, and their extraordinary success is also a celebration of family — all families — and the American Dream.

That was a deliberate choice on the part of the creative team: director Jerry Mitchell, choreographer Sergio Trujillo and book writer Alexander Dinelaris. 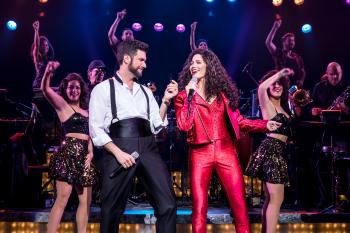 “It’s why I’m so proud of this show, and so excited to share the national tour with the rest of America,” Trujillo said. “We’re all immigrants and we’re all part of this wonderful country, which is made up of people of all colors and races. That is 'On Your Feet!"

If the world onstage rings true, it’s easy for an audience to step inside. The key is “authenticity,” a word used repeatedly by the creative team, and they've aimed for "On Your Feet!" to be as authentic as a Broadway musical can be. The cast is Latino. They speak Spanish as well as English. Original members of Miami Sound Machine are part of the orchestra. The choreography features real Cuban dances, not just the salsa and the conga, but the chancleta and the pañuelo.

“When I would go into the room where Sergio and his dancers were working, it wasn’t like he had to teach them how to salsa, or teach them the rhythms,” Mitchell said. “They came in knowing the language. It was a vocabulary they all grew up with.”

Most of all, the show captures the essence of Gloria and Emilio, who shared the details of their lives with Dinelaris. All the major conflicts and incidents in the show reflect actual events.

“They were amazingly generous,” Dinelaris said. “We had lots of meetings and talked for hours. I eventually spent time with Gloria’s mother, who recently passed. She was an amazing woman, tough as nails and charismatic, and she became a major character in the show. When I had all this information, I had to figure out which part of their story I would tell to make it the most effective.”

Once he had the structure, Dinelaris listened to the entire Estefan catalogue, to determine what music would work best.

“I was smart enough to know that we’d use ‘Conga’ and ‘Rhythm is Gonna Get You,’” he said. “But there are also some songs in the show that only hard-core Estefan fans will know, like ‘Famous.’ It’s a challenging puzzle when you’re doing a musical based on an existing catalogue, because you need to find songs that will move the story forward without changing the lyrics. I did change one word in one song, and that was with Gloria’s permission. There’s a love song called ‘When Someone Comes Into Your Life,’ and I realized that by changing just one word, the song would work as a father giving advice to his daughter. There was one scene where I couldn’t find any song that worked. So I called Gloria, and she ended up writing a new song, ‘If I Never Got to Tell You,’ with her daughter, Emily.”

For director Jerry Mitchell, it was important to capture the special connection between the Estefans.

“It was all the things I didn’t know about Gloria and Emilio that I wanted to put in the show,” he said. “Their partnership displayed itself every day, in every way, down to eating lunch. It was obvious how they took care of each other, how they were there for each other after all these years together, and that was exciting. They have such a strong sense of family, and I wanted to bring out that family dynamic. It made me think a lot about my own family, and how everyone has someone in their family who is the most supportive and someone who is the least supportive. That was part of the story that we were trying to wrap our heads around.”

In telling the story of two musicians who went on to worldwide fame, the songs and the choreography propel a great deal of the narrative. Even the numbers that are done in concert often move the story along.

Act I ends with "Conga," and in the original script, Dinelaris wrote that the lights explode and there’s a big production number.

“I said, ‘That’s not enough; we have to tell the story,” Mitchell said. “So I asked Gloria and Emilio to tell me whatever they could about ‘Conga,’ which was their first massive hit. It was written in the Netherlands as an encore piece, and when they came back to the States, they performed it at weddings, at bar mitzvahs, anywhere that they could get a gig. Now, a few years earlier a dancer named Spencer Howard showed me a video of him dancing with his mother and maracas at his bar mitzvah. I got the video from Spencer, showed it to Sergio and said, ‘This is funny. This is true. And truth is where humor lies.’ And that’s how we built the number.” Without giving away how the number evolves, suffice it to say that the conclusion is inspired by Gloria’s concerts. “The idea was to take a radio song and give it a story and a reason to exist in this musical.”

While the concept was Mitchell’s, the execution was by Trujillo, who received a Tony Award nomination for his choreography.

“Having worked on 'Jersey Boys,' I learned a great deal about what to do with the progression of a pop star, and what to do within that kind of story and vernacular,” Trujillo said. “In order to be truthful, I had to create a vocabulary that was unique to our show.”

He began by immersing himself in all kinds of Cuban dance, in order to capture the essence of the movement. For instance, he has danced the salsa since he was a boy in Colombia, but the style he learned was different than the Cuban style.

“Colombians use really quick feet movement, while the Cuban style is a lot more languid, more sensual,” he said. “Cubans move differently than Colombians do when they dance, or Venezuelans or Argentinians — we all have our own way of expressing movement. With the Cubans, it feels like they’re playing congas with their feet. It’s in their rib cages, it’s in the soul of who they are.”

Dinelaris was particularly moved by Trujillo’s choreography for "Wrapped," which he describes as “a fluid piece of poetry.” It comes after the horrific 1990 bus accident, and Trujillo said he was initially stumped by what to do with the number. So he called Gloria and asked her how the song came about.

“She said that when she was on the road, it was very hard to be so far away from her loved ones,” he said. “That’s why she wrote the song. And then I immediately knew what the number needed to be.”

Once again, it comes back to family. And that, Dinelaris said, is one of the great takeaways from the show.

“This story about immigrants, about perseverance, about family, is about all of us,” he said. “On Broadway, I heard audiences say all the time, ‘That Cuban grandmother is my Jewish grandmother’ or ‘my Irish grandmother.’ It’s a universal story. The comment I heard more than anything else was, ‘It wasn’t what I expected. I expected the Gloria Estefan revue. I didn’t expect to be moved and to cry and to see my family in it. I didn’t expect the goosebumps and the tears. I just expected to have a good time.’ And I think that has to do with how we identify with family and with culture. And I hope people leave the theater, go home, and call their mother.”

"On Your Feet" will play at ASU Gammage Nov. 6–11. For more information visit asuevents.asu.edu. Buy tickets via Ticketmaster at ASU Gammage.

Written by Sheryl Flatow. Flatlow has written about the performing arts for more than 30 years. She is also a lecturer at Florida Atlantic University's Lifeling Learning Society in Boca Raton, and has curated exhibitions on major artists, including Stephen Sondheim and George Balanchine.