A highly acclaimed study program in Prato, Italy, has helped expand the profile and prestige of the Sandra Day O’Connor College of Law at Arizona State University.

The program was launched through a partnership with Monash Law School of Melbourne, Australia, which has a campus in Prato. Diana Bowman, who oversees the program as ASU Law’s associate dean for international engagement, says its benefits are twofold. 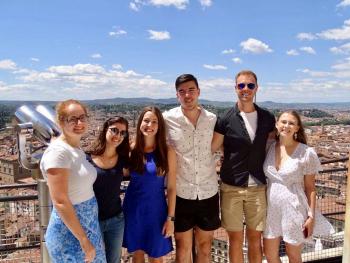 “One, the program provides an amazing opportunity for personal growth,” she said. “Our students stay in Italy for a minimum period of four weeks and must live as if they were a local. This provides them with an opportunity to appreciate and embrace the culture, the language and the rich history of a country. Two, our students are provided with an opportunity to study with leading scholars and practitioners from around the world that they wouldn’t otherwise have access to, while simultaneously building relationships and networks with other law students from around the world.”

For second-year student Abbey Hawthorne, the program played a big role in her decision to apply to ASU Law.

“Because I was interested in international law, the Prato program was part of what sold me on coming here,” she said. “It was really important to me to know that ASU Law valued international law and had a focused program and study-abroad opportunities.”

Bowman says the experience allows students to build a global network of colleagues that can serve as an invaluable resource throughout their career.

“The Prato programs brings law students from, for example, Australia, the U.K., France and Italy together in a classroom, and over the course of four weeks, studying together, taking meals together and going on weekend expeditions provides them with a phenomenal opportunity to build long-lasting international friendships and networks,” she said. “That’s invaluable. Just imagine if when out in practice, (one faces) a matter that pertains to Frank’s Law (a new health care law Scotland will implement in April). Rather than having to start from scratch, that person can potentially reach out to one of their colleagues from Prato and ask for assistance in solving the complex legal issue in front of them.”

Hawthorne is seeking a career in international alternative dispute resolution, so the global and European focus of the curriculum appealed to her.

“That was exciting to me to get credits that are fully recognized here, but being able to see things from a different perspective,” she said. “For example, when I was there, I had a French professor who taught at a university in Paris, and I was taking an EU external relations class. Learning that from somebody who is from the EU and was educated in the EU and works with the EU on a daily basis was a fantastic opportunity.”

The class included topical assignments involving the EU, such as a mock “Brexit” negotiation, which offered unique insights into the issue.

“From the U.S., it’s very arms-length,” Hawthorne said. “But being in Italy with a French professor and classmates who are from the EU, as well as other places around the world, I felt like I was able to dive deeper into the subject matter. I felt I had a better understanding of the issues compared to if I had taken the class in the U.S.”

The program includes a rotating staff of instructors which includes former Arizona Attorney General Grant Woods. Bowman said Woods has been involved with the program for a number of years.

“For somebody of Grant’s caliber, putting his life on hold for four weeks is a serious commitment both personally and professionally. The fact that Grant has been willing to do this for a number of years now, and will be doing so once again in June 2019, speaks to how special the program is,” Bowman said. “Grant has been an amazing ambassador for the program and ASU Law in general, and based on my discussions with him, he appreciates the discussions and the debates that take place in the classroom as much as his students.”

Law school students focused on externships may be fearful of the time commitment. But Hawthorne said the relatively short schedule leaves plenty of opportunity for both.

“I was able to do the Prato program and do an externship, so I didn’t have to choose,” she said. “And I had wonderful experiences with both.” 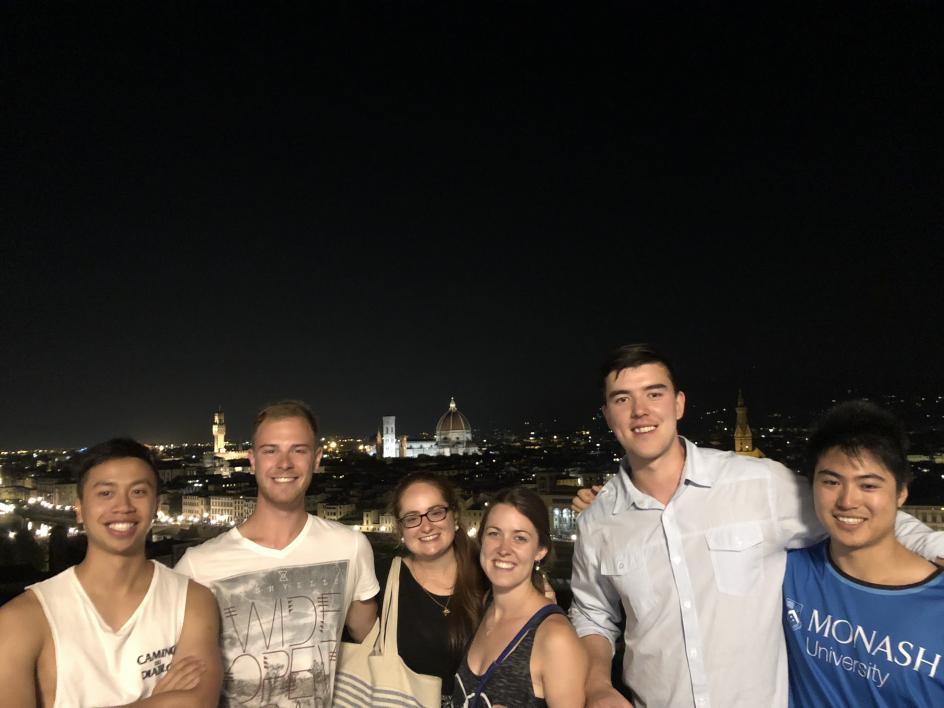 Students in the 2018 Prato Study Program. 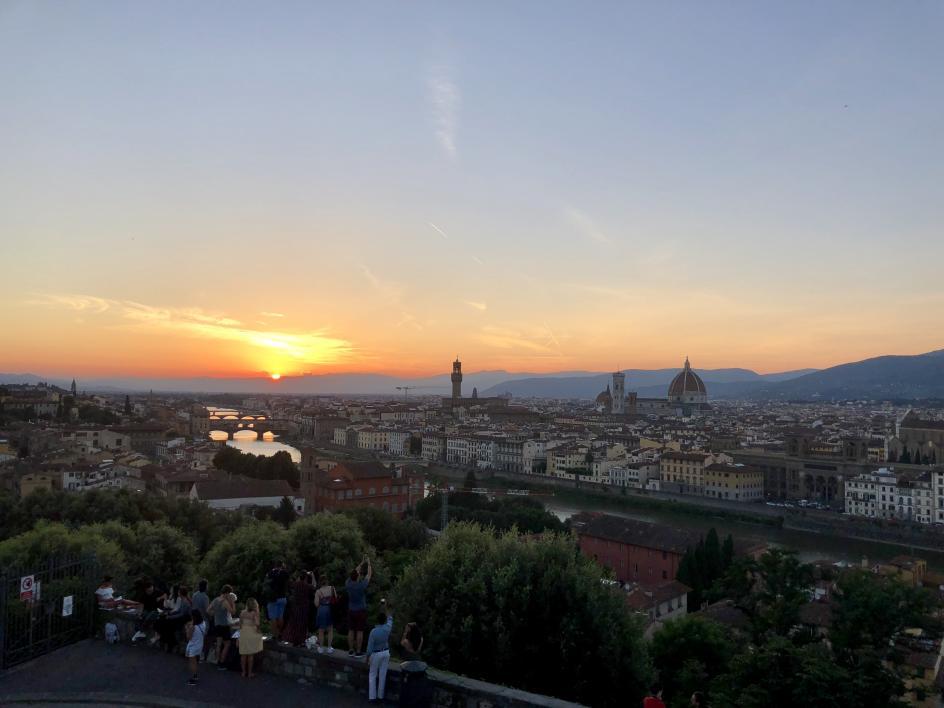 A sunset in Florence during the Prato Study Program. 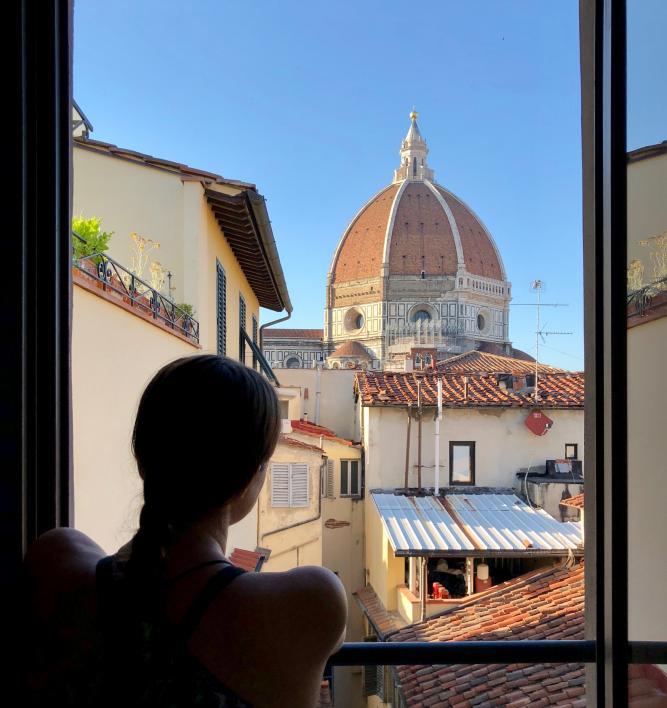 Abbey Hawthorne, second-year law student, enjoys the view of the Duomo in Florence. 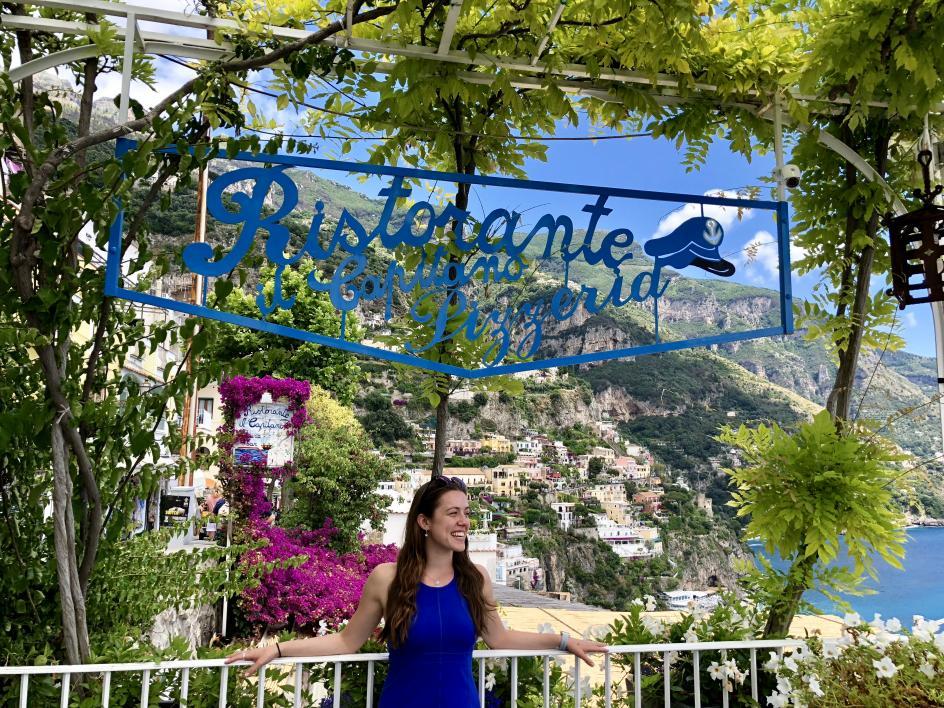 Bowman agrees that the program affords plenty of time for students to also pursue externships and internships. And she says the program increases a student’s employability.

“In addition to having something fabulous to talk about when you go into an internship, employers see the value of students stepping outside their comfort zone, challenging themselves and interacting with people from different cultures and environments,” she said.

Hawthorne — who, thanks to the connections she made in Prato, plans to study next fall in Melbourne, where she will seek an externship in international law/global trade — did not hesitate when asked if she would recommend the program to other students.

“It was such an incredible experience. I knew it was going to be interesting, but it exceeded my expectations, both in the classroom and the experiential learning outside the classroom,” she said.

She reflected on one such beyond-the classroom experience that was particularly memorable.

“It was the first week, Friday afternoon, and we got out of class at noon,” she said, recalling that she and several classmates were taking the train back to their temporary home in Florence. “We suddenly decided that we wanted to go to the Amalfi Coast that weekend. And so we got a rental car and spent the weekend there, and came back Monday just in time for class. I was learning on both ends, but having this incredible experience in between. That was, to me, a very typical Prato experience.”

And with the location, she said, the program sells itself. A sentiment that Bowman echoed.

“The wonderful value of this is that you get a month in Italy, in one of the most beautiful countries in the world, and there is so much learning that goes on beyond the classroom,” she said. “You get the cultural, historical context, but also learn about yourself, and the independence you gain by doing a program like this.”

Next year’s Prato courses will be offered in three blocks:

Due to class dates and finals, ASU Law students can participate in either Block 2 or Block 3.

The application deadline has not been finalized, but applications will be due approximately Feb. 1, 2019.

Mastercard Baobab program at 6 years: Where it's been and where it's headed