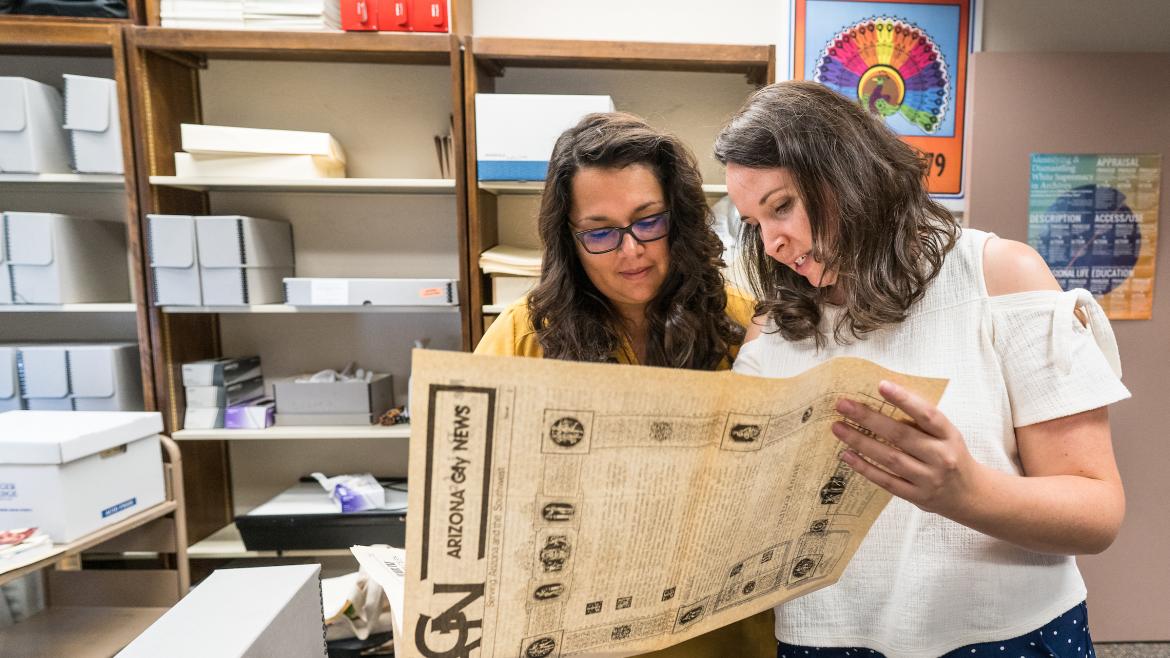 Community members' participation in archiving history is vital.
Latinos make up 30% of AZ's population but appear in less than 2% of archives.
October 24, 2018

Over the next two years, large portions of four of the library's unique archives — putting farmworkers, civil rights and LGBT history in the spotlight — will become available online to anyone, anywhere

In a small office on the third floor of the Music Building — ASU Library archives’ temporary home during the Hayden renovation — a small desktop scanner whirs quietly as beams of bright light wash over the photo enclosed beneath its lid.

When all the information is entered and the scanning is complete, she lifts the lid, gently extracts the photo with a gloved hand and places it back in its protective Mylar casing. The photo goes back into a folder containing roughly 10 to 15 more like it, which goes back into a box containing 20 to 25 more folders like it, which goes back onto the shelves that line the walls of the room and contain roughly 70 more boxes like it.

Then it’s on to the next box.

Each photo can take up to five minutes to scan. With anywhere from 14,000 to 26,250 photos in the collection she's working on, it's a significant time investment.

Tedious though it may be, this operation is part of a significant three-year project titled “Engaging, Educating, and Empowering: Developing Community-Driven Archival Collections.” Supported by a $450,000 grant from the Andrew W. Mellon Foundation, the project has the goal of giving voice to historically marginalized communities by preserving and improving Arizona’s community archives.

Thanks to the efforts of head project archivist Varner and her team, a large portion of the Bj Bud Memorial Archives, the largest LGBT collection in Arizona, will soon be accessible online, to anyone, anywhere.

Over the next two years, the grant will also allow for three more of the library's other unique and most consistently utilized archives to be accessed online. They are: the Maricopa County Organizing Project (MCOP) Records, detailing local farmworker and civil rights history from 1960-1990; the League of United Latin American Citizens (LULAC) Collection, which tells the story of the oldest active Latino civil rights organization in the U.S.; and the Alianza Hispano Americana Records, which tells the story of the oldest Latino mutual aid society.

A selection of periodicals and photographs from the Bj Bud Memorial Archives will be on display at an event from 6 to 8 p.m. Thursday, at the Tempe Transportation Center at 200 E. 5th St. The event is free and open to the public.

Historically, Varner said, archivists haven’t done a great job of including the stories of minority communities.

“The goal of this project is both to show these communities that their histories are valuable and worth saving, and to show people in our profession that these communities have been ignored for too long and we need to work with them and make amends for that and build trust,” she said.

As an undergrad at the University of Arizona, Varner had a job in the library’s special collections. That was around the same time the state started seeing proposals to ban ethnic studies and the passage of SB 1070, an anti-illegal immigration measure widely criticized as racial profiling.

It made her wonder how much of what she was witnessing would make it into the annals of recorded history. So she committed to becoming an archivist.

A few years later, while working for Densho, a nonprofit organization in Seattle that collects oral histories and documents related to Japanese-American internment during World War II, Varner met ASU Library archivist Nancy Godoy at a conference for the Society of American Archivists.

Godoy, who grew up in the border town of Yuma, has been an unceasing force for growing ASU Library’s minority-themed archives and community outreach efforts. The pair recognized each other as kindred spirits, and when Godoy got news of the Mellon grant later that year, Varner jumped at the chance to work with her.

In addition to digitizing archival materials to make them more accessible, the grant also supports the formation of a community advisory board, as well as “Archives and Preservation Workshops” and “Digitization and Oral History Days.”

Both Varner and Godoy agree that including the community in the archival process is vital.

“This won’t work if the community isn’t part of it,” Godoy said. “If we don’t do this together, that’s how communities get erased.”

“The whole point is to create community archivists who can do this all themselves.”
— ASU Library archivist Nancy Godoy

Not only are there gaps in information — such as names and places — that community members who were there may be able fill in, they may have their own invaluable pieces to add to the archive. All of that helps to tell a more accurate, inclusive story.

Though the Bj Bud archive is notable because of its size and subject, it mostly tells the story of gay, white males.

“We hope other minority groups — people of color, trans people — within [the LGBT group] will participate and contribute to this archive as well, because we need to widen the scope of perspectives,” Godoy said. “We don’t want to further marginalize people.”

The team is marketing community workshops toward Latinos, African-Americans, LGBT and Asian-Americans based on research that found those ethnic groups to be in need of more historical documentation. At the workshops, participants learn such skills as interviewing techniques, how to record oral histories and photo scanning.

“The whole point is to create community archivists who can do this all themselves,” Godoy said.

Documenting the past can also change the future. Because the archives are now accessible to the public, the project team hopes to see them used in curriculum from K–12 to the college level.

Textbooks are exclusive and therefore biased, they said. The archives consist of primary resources that can be observed and considered objectively.

“This project, for me, just resonates so strongly,” Varner said. “I think it’s something that Arizona really needs. It just seems to be so powerful and meaningful for people to have access to this information.”

You may think of Bugs Bunny and Donald Duck as the lovable cartoon characters you grew up watching in Sunday morning cartoons. But according to Kevin Sandler, an associate professor in the Film and Media Studies program at Arizona State University, during World War II these animated icons and their friends were pictured battling Nazis in short films made for military personnel. “World War II p...

You may think of Bugs Bunny and Donald Duck as the lovable cartoon characters you grew up watching in Sunday morning cartoons. But according to Kevin Sandler, an associate professor in the Film and Media Studies program at Arizona State University, during World War II these animated icons and their friends were pictured battling Nazis in short films made for military personnel.

“World War II permeated all genres of Hollywood production, perhaps unlike any time in Hollywood’s history. Certain genres arose during World War II — the combat film and the home-front dramas — but war themes abounded in established genres like the musical and the screwball comedy as well as Hollywood’s secondary products like newsreels, serials and cartoons,” said Sandler. 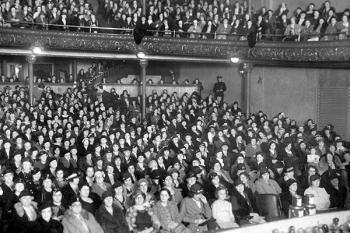 On Wednesday, Nov. 14, from 7 to 8:30 p.m., the College of Liberal Arts and Sciences will co-host a program with the United States Holocaust Memorial Museum titled  “What Were We Watching? Americans’ Responses to Nazism Through Cinema, Radio and Media.”

Sandler will be joined at the event by Daniel Greene, a curator at the United States Holocaust Memorial Museum, and Mi-Ai Parrish, a Sue Clark-Johnson Professor for Media Innovation and Leadership in ASU's Cronkite School of Journalism and Mass Communication.

Hava Tirosh-Samuelson, ASU Regents’ Professor of history at the School of Historical, Philosophical and Religious Studies and director of the Center for Jewish Studies, said the Holocaust must be understood in its proper historical context, first and foremost in Europe and secondarily in the U.S.

“In the context of European history, the Holocaust has to be understood in terms of the long history of anti-Semitism, German history, the processes of modernity and the rise of the nation-state and nationalism. In the context of the United States, the Holocaust should be viewed more in terms of perception, namely, what was known about Nazism and the Final Solution at the time and how did Americans — including American Jews — respond to the information. America is also crucial to understanding Jewish life in the post-Holocaust years. We are now over 70 years beyond the horrific events of the Holocaust and we need to ponder how the Holocaust shaped the identity of Jews and the interpretation of Judaism,” Tirosh-Samuelson said.

While the upcoming event will look at media consumed at a specific time in history, it’s a topic very relevant to students and citizens today.

“Students today live in a culture that is saturated with images; they need to be very sophisticated interpreters of images,” Tirosh-Samuelson said. “They can’t just believe what they see, since images are easily manipulated by new technologies. The fact that you see an image or have something available on your screen in your palm doesn’t mean that image is factual. Students need to become critical interpreters of cultural imagery as well as of written texts and auditory messages.”

Tirosh-Samuelson stressed the importance of attending events such as this one to deepen understanding of the world’s history and Jewish history so as to understand their implications for current events.

“Students should come to a university not merely for the sake of earning a degree that secures employment but to acquire the skills, attitudes and values necessary for becoming responsible citizens,” Tirosh-Samuelson said. “Understanding how American media covered the Holocaust is part of that civic education.”

This event is free and open to the public, but registration is required. For more information or to get tickets, visit the United States Holocaust Memorial Museum website.