Researchers, in collaboration with Northwestern and San Diego State, look at the process of spinning such incredibly strong silk at a molecular level

Scientists at Arizona State University are celebrating their recent success on the path to understanding what makes the fiber that spiders spin — weight for weight — at least five times as strong as steel.

One of the fundamental mysteries of spider silk that has limited scientists’ ability to produce artificial silks of the quality of natural silks has just been explained by researchers in ASU’s School of Molecular Sciences in collaboration with a team from San Diego State University and Northwestern University.

Their results, published online today in the Proceedings of the National Academy of Sciences (PNAS), are in a paper titled “Hierarchical spidroin micellar nanoparticles as the fundamental precursors of spider silks.”

"Spider silk has a unique combination of mechanical strength and elasticity that make it one of the toughest materials we know," said Jeff Yarger, professor in the School of Molecular Sciences in the College of Liberal Arts and Sciences.

Spider silk is an exceptional biological polymer, related to collagen (the stuff of skin and bones) but much more complex in its structure. The ASU team of chemists is studying its molecular structure in an effort to produce materials for uses ranging from civil and mechanical engineering to artificial, yet biocompatible, tendons.

Unfortunately, spiders don’t produce silk in large quantities. “You can put lots of silkworms in a small area and genetically modify them to go from the larval state to a moth in 20 to 30 days. Spiders take longer. But let’s get to the crux of it — spiders don’t like each other. They eat each other,” Yarger said. This, of course, eliminates the possibility of farming them en masse.

Scientists have come up with ingenious ways to get around this problem. They have genetically engineered silkworms, E. coli and even goats to produce spider silk. Unfortunately, while these organisms produce the same proteins that spiders make, they don’t have the same mechanical properties as the natural product. They aren’t as strong, for instance, or as flexible. 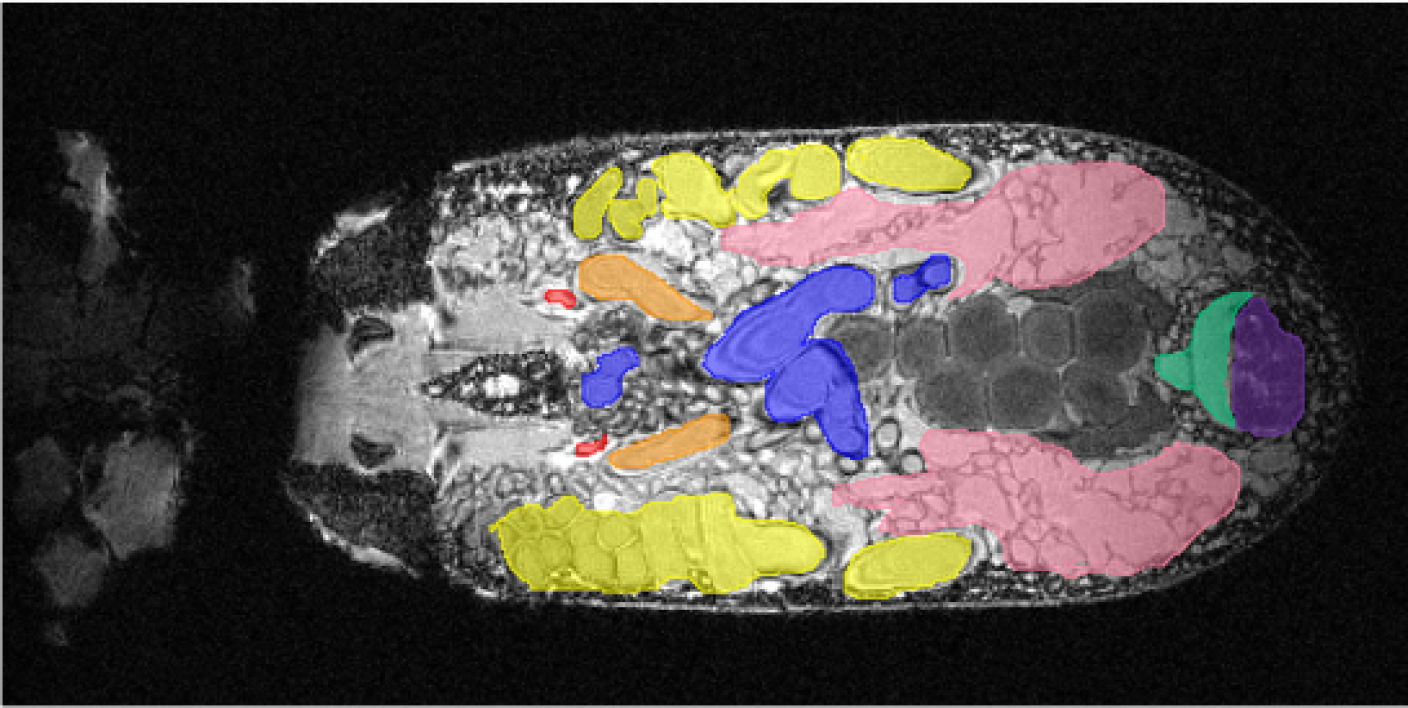 The abdomen of a Nephila (or golden orb-weaver) spider also in the Yarger lab shows ducting and spinnerets as well as glands. These spiders are known for their impressive webs.

A cross-section of the abdomen of a locally collected black widow (or Latrodectus hesperus) spider used in this study.

“In a matter of milliseconds, a spider can take a concentrated protein solution stored in its abdomen and pull this material rapidly through ducting and spinnerets to produce silk fibers,” Yarger said.

“Understanding at the molecular level how spiders perform this complex process, and reproducing it in the lab, is the primary research objective within our group.”

The team employed a suite of magnetic resonance tools — NMRNMR stands for nuclear magnetic resonance. The term is used interchangeably with MRI, or magnetic resonance imaging. (or MRI) at ASU and San Diego State as well as cryo transmission electron microscopy at Northwestern University. They studied the precursor solution of the dragline silk of local black widow (or Latrodectus hesperus) spiders.

Top photo: An Argiope spider — whose silk is being studied by the Yarger group — is pictured in the Magnetic Resonance Research Center, in the basement of ASU’s Interdisciplinary Science and Technology 1 building.