Eight Arizona State University faculty researchers are part of an eight-campus consortium of U.S. universities that is revolutionizing bioimaging through collaborations with academia and industry.

A recent $22.5 million award from the National Science Foundation (NSF) will allow BioXFELBioXFEL is short for Biology with X-ray Free Electron Lasers. to continue the groundbreaking work to develop advanced imaging techniques for critical biological processes that are difficult, if not impossible, to see with conventional methods. 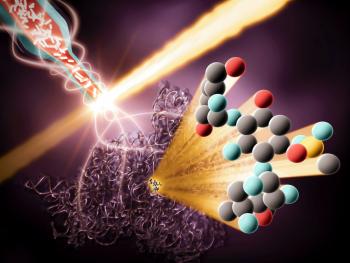 An X-ray free electron laser catches the dance of antibiotics and ribosomes at room temperature. Image by BioXFEL

According to Director Edward Snell, the award renewal will enable researchers to understand the complete dynamics of biological mechanisms.

“The renewal of this award builds on the success of the first five years during which we used free electron lasers to make movies of molecular machines at work,” said John Spence, FRSForeign Member of the Royal Society., the Richard Snell Professor of Physics at ASU’s Center for Biological Physics and Biodesign Institute. Spence is the scientific director of the BioXFEL consortium, of which the eight ASU faculty form the largest component.

Over the past five years, the researchers have developed hardware and software needed to obtain X-ray snapshots and movies of molecules involved in photosynthesis, the development of new drugs and the process of antibiotic resistance, among others. Eight researchers and their lab teams from ASU's Biodesign Center for Applied Structural Discovery will push the boundaries of X-ray crystallography as part of the nationwide BioXFEL consortium.

To develop these new methods, the group also used the Department of Energy’s SLAC laboratory near Stanford, the world's first X-ray laser. According to Spence, the grant will allow researchers to apply new methods to new problems, including understanding how enzyme catalysis works at the atomic level — a process involved in practically all human health and disease processes.

“Our researchers can capture biological molecules in atomic detail, view their functional motions by taking brief snapshots, and observe interactions in their native environment,” Spence explained.

“The compact X-ray laser (CXFEL) currently under construction at ASU Biodesign will be a huge asset to this program,” said Spence. The concept behind the ASU project is to make the XFEL technology more widely available to researchers all over the world at greatly reduced cost and size. The ASU machine will provide briefer snapshots, approaching the level where electrons themselves — rather than atoms — can be caught in motion, and allowing the time-structure of the coherent beam to be customized for new spectroscopic techniques in chemistry. Currently, scientists vie for limited — and expensive — space on one of five XFELs that currently exist in the world. "We expect the machine to be attractive to emerging economies worldwide," said Spence. The compact X-ray laser (CXFEL) currently under construction at ASU Biodesign will be a huge asset to this program. The concept behind the ASU project is to make the XFEL technology more widely available to researchers all over the world at greatly reduced cost and size.

“BioXFEL center scientists have made revolutionary advances in just a few years, using X-ray lasers to probe phenomena previously hidden from view,” said Venu Govindaraju, vice president for research and economic development at the University at Buffalo, where the project will be administered.

The goal of the research is to harness the power of X-ray lasers to transform a broad range of scientific fields focused on structural biology and drug development and extending to potential innovations in environmental technologies and the development of new materials.

The NSF Science and Technology Centers: Integrative Partnerships program supports innovative, potentially transformative research and education projects that require large-scale, long-term awards. The centers foster cutting-edge research, education of the next generation of scientists and broad distribution of the knowledge and technology produced.

Ellen Goodman of University at Buffalo contributed to this article.