Hacks for Humanity grows, inspires others in academia

Sounds like the internet being broken, but it was a good thing. A very good thing.

It was Hacks for Humanity 2018, which took place Saturday and Sunday at Stauffer Hall on Arizona State University’s Tempe campus. Sponsored by ASU’s Project Humanities, the fifth annual “hackathon” is a 36-hour entrepreneurial marathon in which developers, artists, humanists, futurists, designers and visionaries participate in panels and workshops and are challenged to create technical solutions and initiatives to address local and global issues.

“This hackathon embodies the best that is diversity — bringing together folks from across disciplines, ages, professions and lived experiences,” said Neal A. Lester, professor of English and director of Project Humanities. “Our event — a burst of ‘creative disruption’ — shows that the truest innovation comes when we collaborate with those seemingly unlike us to arrive at together what we could not do alone. To witness this process and the amazing products that emerge from teams after an intense 36 hours is quite something to behold.”

Participants were required to implement three of the seven principles Project Humanities identifies as Humanity 101 into their technology products: kindness, compassion, integrity, respect, empathy, forgiveness and self-reflection. This year, the hackathon added three new tracks to guide participants’ creativity and innovation: parenting, mobility and social justice, according to the event's organizer.

This year's tied-for-first winners focused on mobility. My Siren is a siren-detecton phone app that alerts deaf and hard-of-hearing invididuals to nearby emergency vehicles and operates for both pedestrians and drivers, especially those in urban areas. The other winning entry, Noobs, is an app that improves mobility for the visually impaired by allowing more independence and safety. It does so by allowing individuals to be better integrated into their environments with greater confidence to perform daily tasks.

The hackathon provided participants with the opportunity to collaborate, network and discover the myriad resources they need to succeed as social entrepreneurs and businesspeople. Others involved with the event say it benefits the Valley on another level: presenting Phoenix as a hot technology market.

“These kinds of events show big companies why they should move to Phoenix,” said Christopher Huie, a developer for Galvanize, a learning community for technology workers located in downtown Phoenix. “A lot of it boils down to, ‘Is the tech talent here to support a move and bring their businesses here?’ These larger events show that.”

Huie served as a judge in last year’s hackathon. This year, he expanded his responsibilities by helping to recruit mentors and sponsors for the event and by getting the word out in the technology community. He said the reason he does it is simple.

“I like the idea that the premise of the event is to make the world a better place,” Huie said.

And that message is starting to spread to others in academia.

Wetterskog said the UT Dallas hackathon team yielded about 215 participants and 50 mentors, coaches, judges and presenters. He said their main goal was to help people of all backgrounds and experiences and meet critical gaps in humanity and “perhaps even launch a new product that will help someone in the future.” 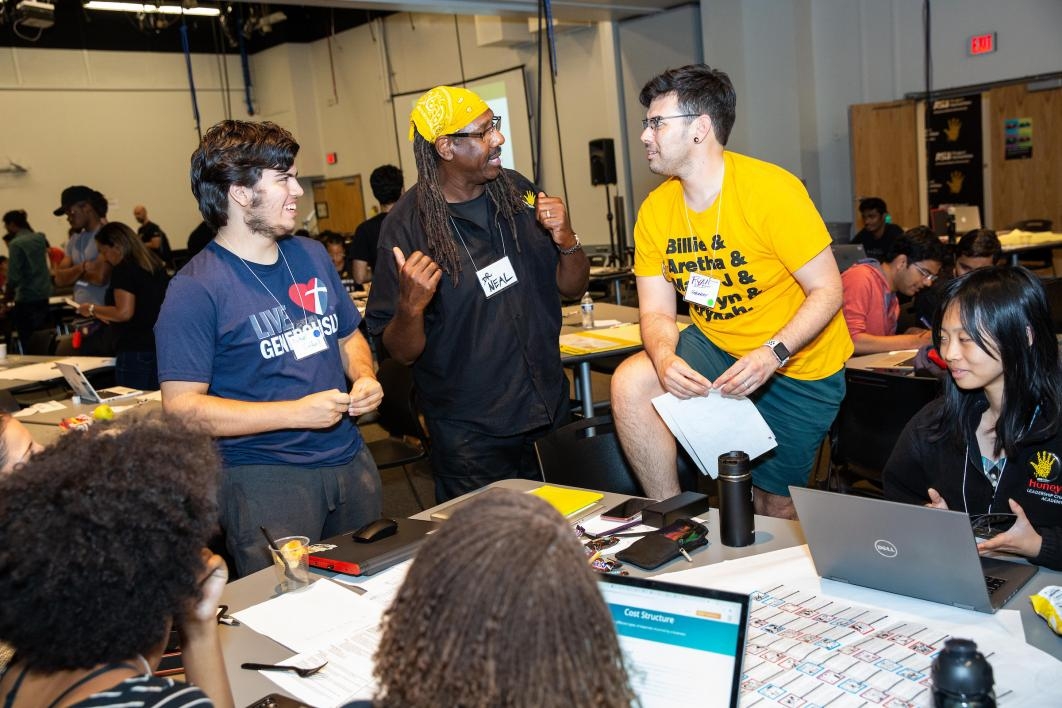 Neal Lester checks in with Table 4 during the 2018 Hacks for Humanity event. 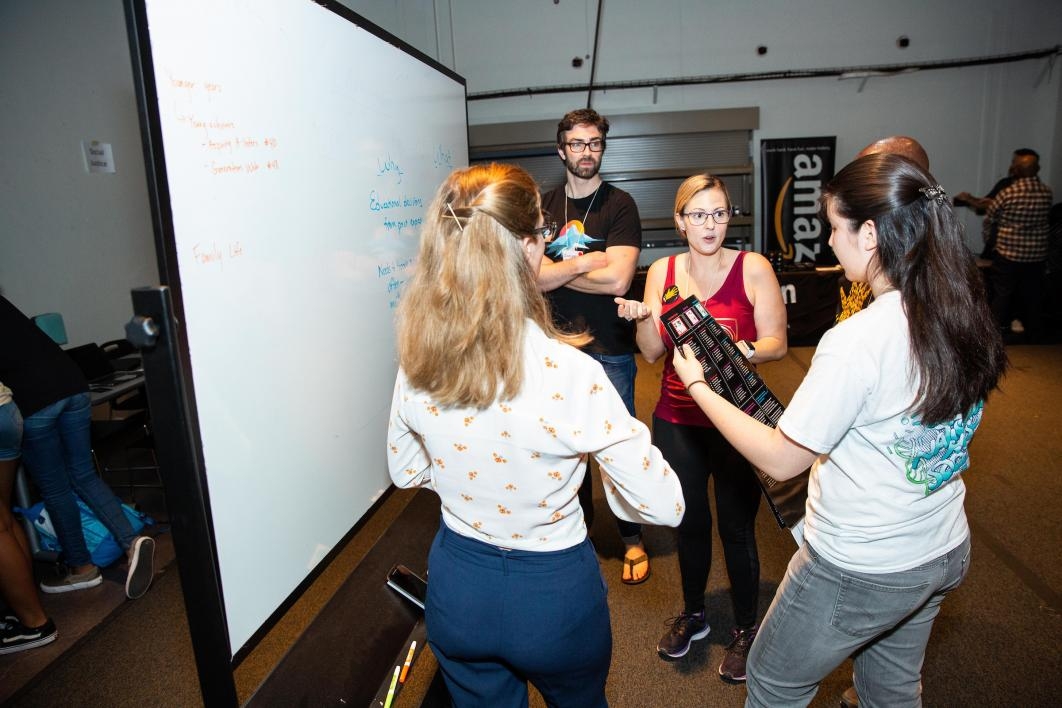 The Table 16 team works on their plan with entrepreneur Nicolina Intiso (center) leading the conversation during the 2018 Hacks for Humanity event. 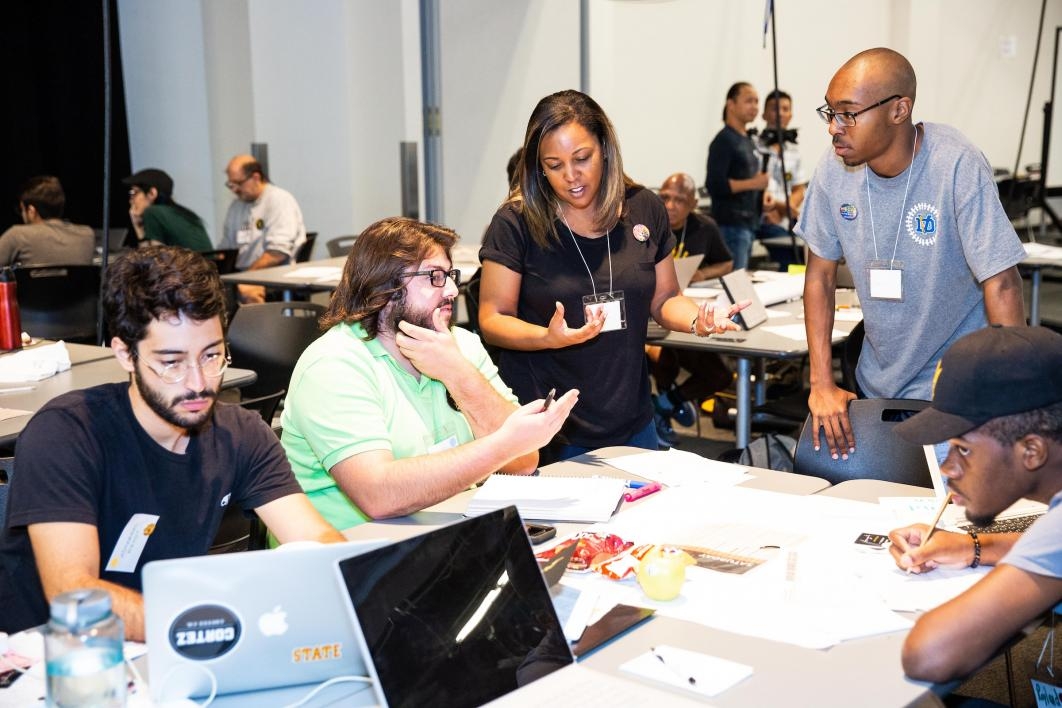 Mentors in social justice Stephanie Barnes and Maurice Barnes check in with history senior Scott Jablon during the start of development during the 2018 Hacks for Humanity event.

For the past four years, the hackathon has brought together creatives from all walks of life. More than 250 people participated in this year’s event, which included more than 50 professionally diverse mentors and volunteers.

Greg Vannoni, a software engineering manager with PayPal, served as both a mentor and a sponsor this year. He said he’d been wanting to get involved with Project Humanities since 2014 but that the timing wasn’t right until this year.

“The first year Project Humanities held its first hackathon was the same weekend we held our Opportunity Hacks. We made a general agreement since that time not to hold it on the same weekend,” Vannoni said. “This year I wanted us to join forces.”

Vannoni said PayPal promotes social innovation and is specifically looking to improve the costs and mobility of banking systems. He thinks Hacks for Humanity moves the needle on the work that PayPal has already committed to this area.

“We want to empower the underserved by using our technology, but not charge an arm and a leg for services,” Vannoni said.

Lester said the excitement and momentum of the event builds each year because participants' efforts have relevance and potential for immediate impact. The hackathon has inspired such technologies as:

• A coping app that helps children with ADHD communicate with their parents.

• An app that prevents parents from leaving children in their hot cars.

• A game-based app that provides adaptive learning technologies for students with disabilities.

• An app that sends daily reminders to perform random acts of kindness.

One of the most notable innovations to come out of Hacks for Humanity is ARKHumanity’s application that scans tweets for keywords that could indicate suicidal thoughts — for example, “I want to die,” “I’m going to kill myself,” or “I hate my life” and other similar phrases. A crisis counselor can then reach out to the person and offer help. This inaugural Hacks for Humanity team has gone on to win multiple entrepreneurship competitions and form its own for-profit, HumanityX.

Last year, 17-year-old Summer Gautier started a hacking club at Westwood High School. She was glad she attended this year's Hacks for Humanity.

“I got to work with people who were a lot older and very creative, which pushed me to be better,” said Gautier. “It was really fun because the energy level at this event is very high.”

Gautier’s energy level was running extra high on Saturday, the first day of the 2018 hackathon. She and her team were working on a proposed website that connects people with disabilities to resources, but she also had just achieved a big dream.

“I just discovered I was accepted to ASU,” said Gautier, who is interested in studying cybersecurity.

The third time is the charm for ASU senior Ben Ladick. The engineering major has been attending Hacks for Humanity since 2016 and enjoys many aspects of the 36-hour event.

“All of the hackathons are very different, but this one definitely stands out because it is focused on humanitarianism,” said Ladick, who was working with a team to solve a problem through social justice and the arts. “It’s a warmer atmosphere for sure.”

Lester said the momentum for Hacks for Humanity grows each year and continues to top itself. He predicts 2019 will be a banner year because the University of Southern Illinois and the University of Evansville also want to join the Project’s Humanity 101 creative and innovative circle.

“While exhausting, this year’s hackathon was bigger, better and even more fun,” Lester said. “Participants bonded and brought such talent and positivity to our community-building effort. We are grateful to all of our volunteers, participants, mentors, sponsors and supporters. Our event proves once again that there is no success without collaboration.”

Mason Andersen Leads The Way For @SunDevilMGolf At Alister MacKenzie

Chandler's Mason Anderson fired a 7-under 135 (68-67) through 36 holes at the Alister MacKenzie Invitational held in Fairfax, Calif, on Monday. ...

Mason Andersen Leads The Way For @SunDevilMGolf At Alister MacKenzie Chandler's Mason Anderson fired a 7-under 135 (68-67) through 36 holes at the Alister MacKenzie Invitational held in Fairfax, Calif, on Monday.