The National Science Foundation has awarded a $1.5 million Smart and Connected Communities grant to a team of researchers at Arizona’s three public universities to develop a network that integrates existing technologies and crowdsourced data to improve real-time knowledge of flooding and enhance communication during flood events.

The Integrated Flood Stage Observation Network (IFSON) will capitalize on a number of communication technologies to bring together citizens and mobilize city planners, first responders and other local stakeholders to assess flood risks and effectively communicate within a shared, collaboratively constructive information space for flood emergencies. 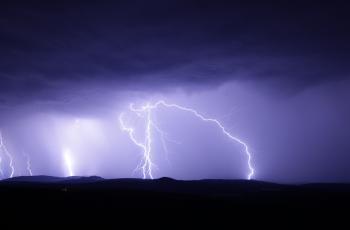 “We plan on developing several novel technologies for real-time flood monitoring, including webcams with image recognition, social media mining, smartphone apps and calibration tools,” said Mikhail Chester, principal investigator for the NSF grant, associate professor in the School of Sustainable Engineering and the Built Environment at Arizona State University, and director of ASU’s Metis Center for Infrastructure and Sustainable Engineering. “The prevalence of smartphones and webcams create new opportunities that haven't existed to provide insights into what's happening in the world around us. We want to put those technologies in the hands of communities to protect themselves against extreme events.”

The network will use raw, open data sourced from inexpensive or free data streams that rely on community input, including social media, traffic cameras and webcams, and share that information with flood forecasters and infrastructure managers. IFSON will be scalable and replicable in any community or city for flood emergencies.

“The future of our nation’s stormwater infrastructure is threatened by a simple irony,” said Ben Ruddell, an associate professor of the School of Informatics, Computing, and Cyber Systems at NAU. “A city’s engineers, first responders, weather professionals and citizens are not connected to enough flood information where we need it the most: in our own backyards.”

The flood hazards created by the concentrated rainfall of Arizona’s annual monsoon season, the state’s extensive transportation infrastructure — some of which is prone to frequent flooding — and the broad network of sustainability and infrastructure researchers make Arizona an ideal place for this research.

The work will include ground help or data from the National Weather Service; the U.S. Geological Survey; the Consortium of Universities for the Advancement of Hydrologic Science, Inc.; and eRams at Colorado State University.

Poetry to the people

Just after 6:30 p.m. on a sweltering Friday in September, Arizona State University English lecturer Rosemarie Dombrowski steps through the gate from the dusty gravel parking lot on the corner of Fourth and Roosevelt streets onto the brick patio between Modified Arts gallery and the vacant house next door.Her arms are loaded with boxes of string lights and she’s followed closely by two eager help...

Poetry to the people

Just after 6:30 p.m. on a sweltering Friday in September, Arizona State University English lecturer Rosemarie Dombrowski steps through the gate from the dusty gravel parking lot on the corner of Fourth and Roosevelt streets onto the brick patio between Modified Arts gallery and the vacant house next door.

Her arms are loaded with boxes of string lights and she’s followed closely by two eager helpers lugging PA system gear. Sporting her signature oversized shades, Phoenix’s inaugural poet laureate is all effervescence and anxious chatter as she gets to work prepping the space for the evening’s event, projecting some hardcore whimsy in a pair of kitten heels and a tea-length cat-print dress while balancing precariously on the porch ledge to secure one end of the string lights to a post.

Meanwhile, the PA grips have set up a speaker to the right of the porch steps and connected it to the microphone sitting expectantly in its stand at the center of the top step. Soon, verse after lyrical verse will pour into it, course through the wires, out of the speaker and into the ears of literature lovers, curious bystanders and unwittingly spellbound passersby.

This is First Friday Poetry on Roosevelt Row, Dombrowski’s most recent brainchild and an attempt to “make poetry part of the vernacular in Phoenix.”

Art out in the real world

Poetry, she said, “needs to be present alongside all the other more visible art forms,” such as mural painting, something she observes with delight has taken over the city in recent years.

By piggybacking on the well-established celebration of all things creative that attracts throngs of Valley residents to the Roosevelt Row Arts District on the first Friday of every month, Dombrowski has positioned her cause to reach people who might not otherwise be exposed — or open — to a poetic experience.

What’s more, several of her current and former students participate frequently and have found the event to be a useful outlet for networking, performing and even selling their work.

“It gives my students a kind of understanding of how literature functions in the real world,” said Dombrowski, who teaches in the College of Integrative Sciences and Arts at ASU’s Downtown Phoenix campus.

First Friday Poetry on Roosevelt Row began in February when Modified Arts gallery owner Kimber Lanning sought to deter rowdy skaters and make productive use of the patio annex during the monthly arts festival by offering it to Dombrowski for public literary programming.

The theme of the event changes every month: cultural storytelling, a showcase of Downtown Phoenix campus students’ work; readings by female-identifying poets; readings from Iron City Magazine, a journal produced at ASU as part of the university’s Prison Education Program that features the writing of incarcerated individuals; readings from Cardboard House Press, a bilingual poetry publication; and “poetry-on-demand,” in which poets took subject requests from audience members and then typed up impromptu verses for them on a typewriter.

No matter the heat index, it always manages to draw a crowd. “Even when it’s blazing hot, they still keep coming,” Dombrowski said, humbly incredulous. 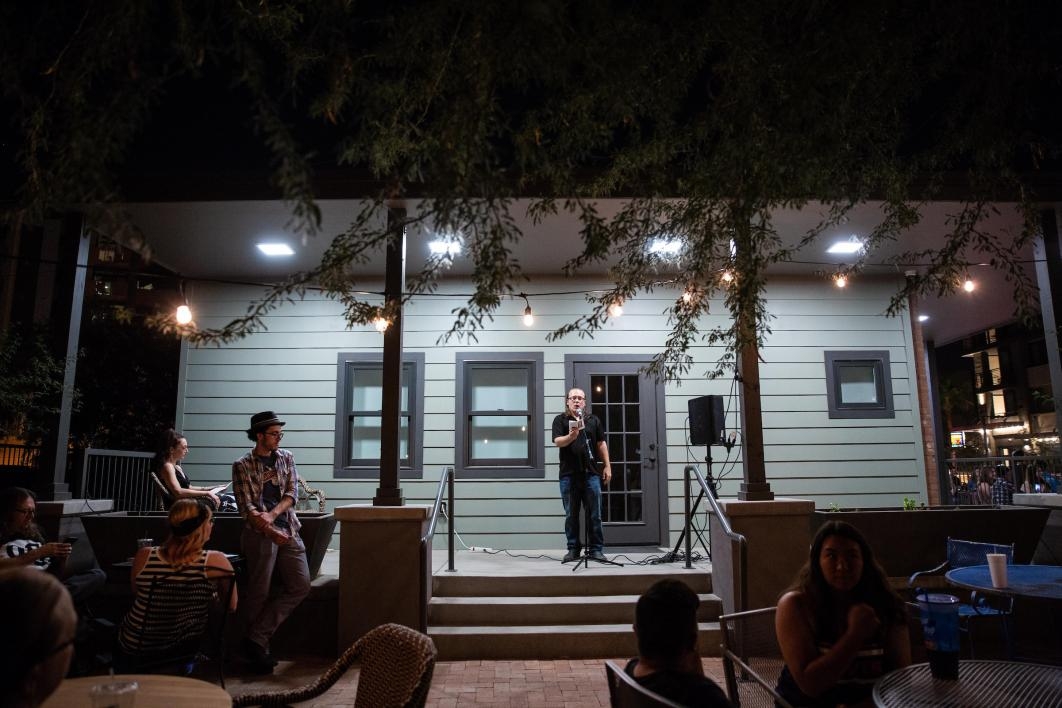 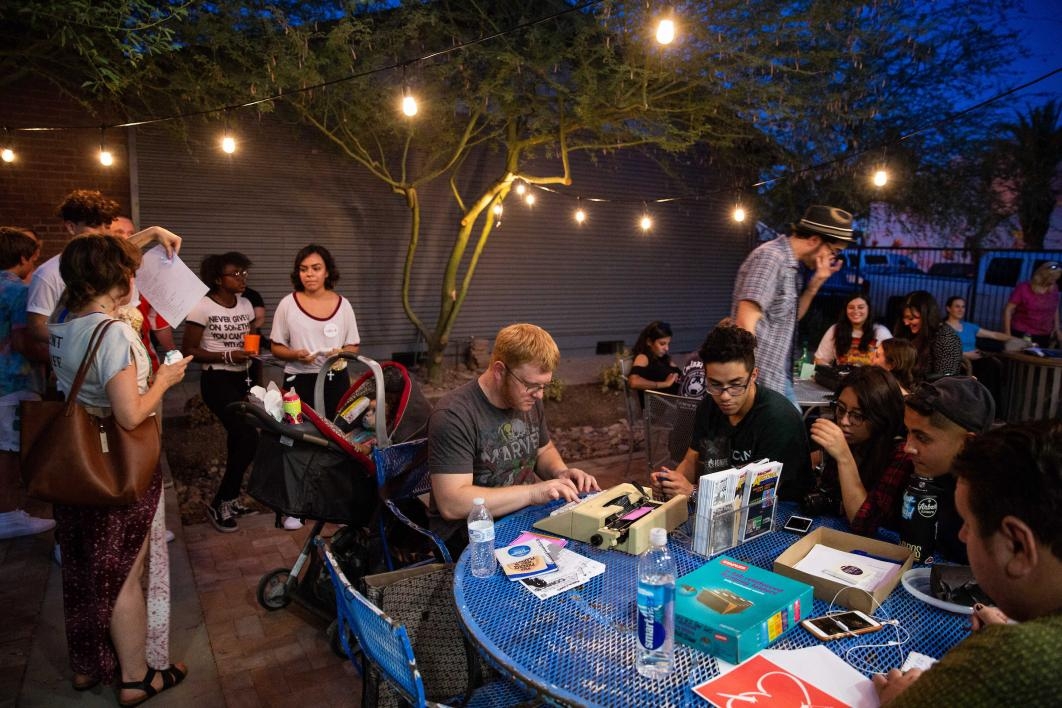 At the July First Friday Poetry event, poets took subject requests from audience members and then typed up impromptu verses for them on a typewriter. 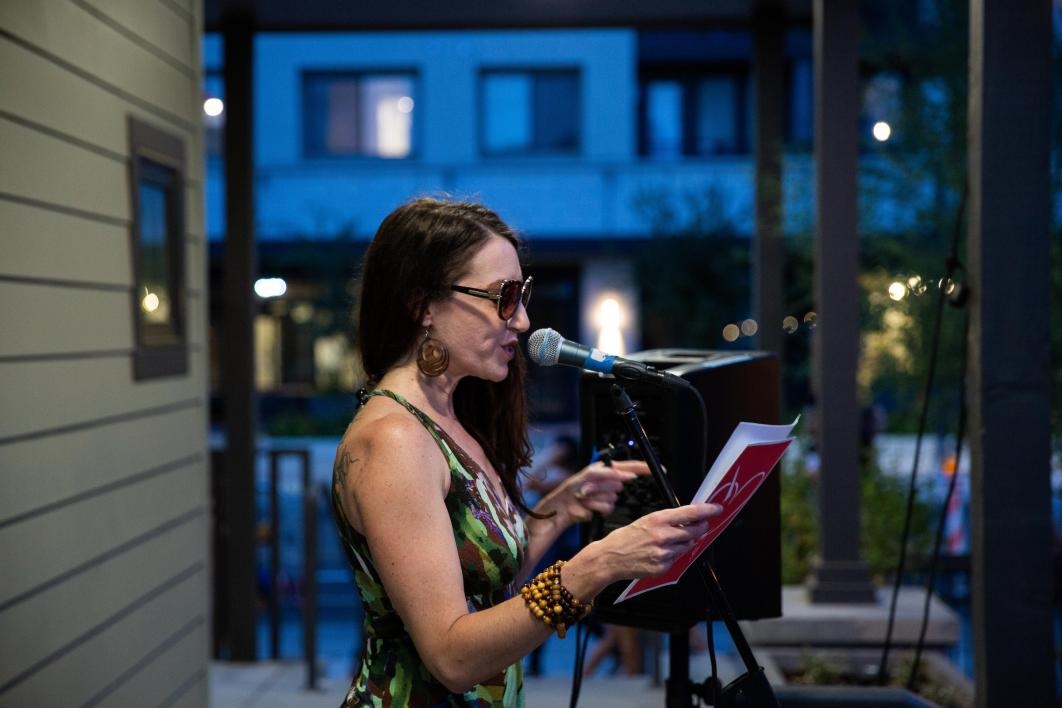 Rosemarie Dombrowski reads a poem about race cars and race cards, as requested by an attendee, at the July First Friday Poetry event. 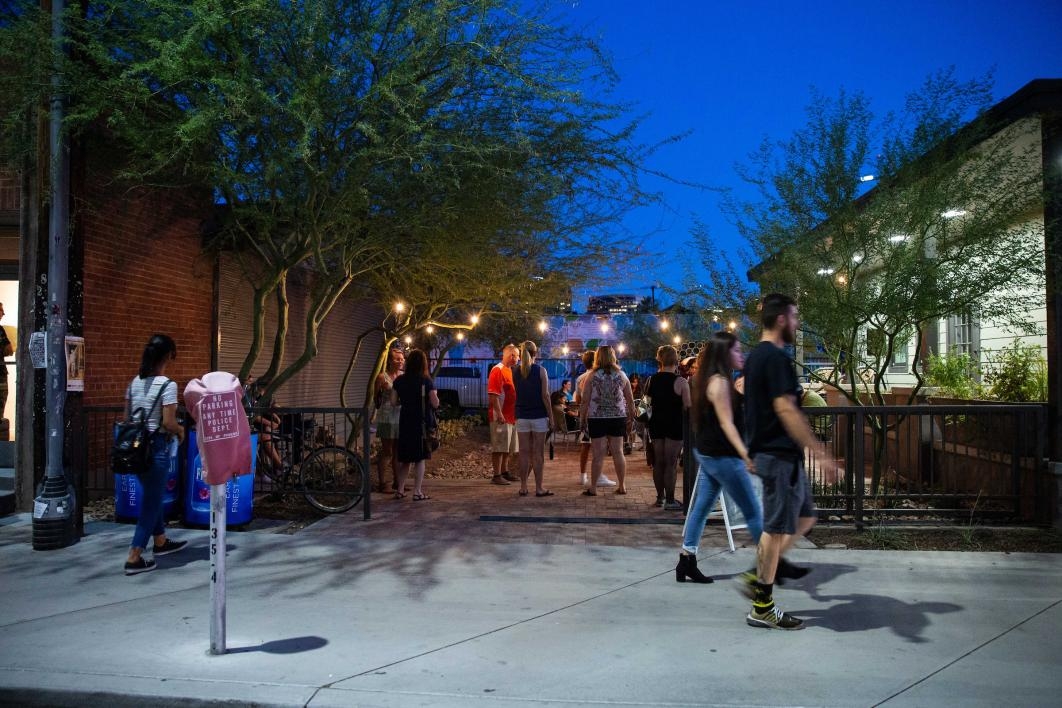 Hundreds — if not thousands — of Valley residents flock to the Roosevelt Row Arts District on the first Friday of every month for a celebration of all things creative. 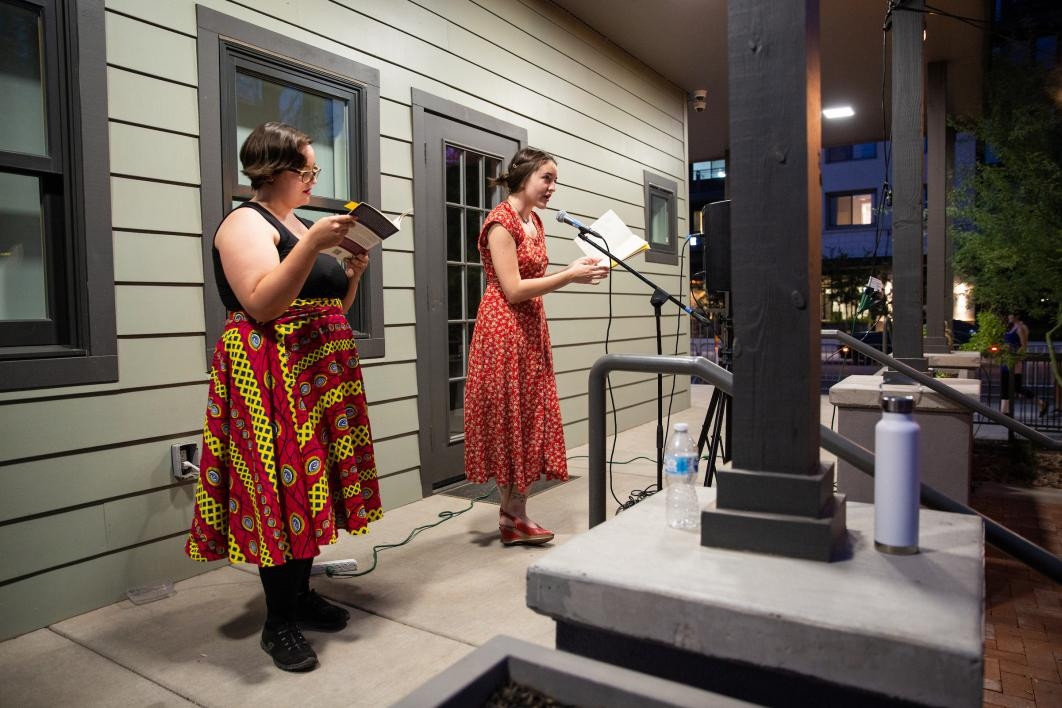 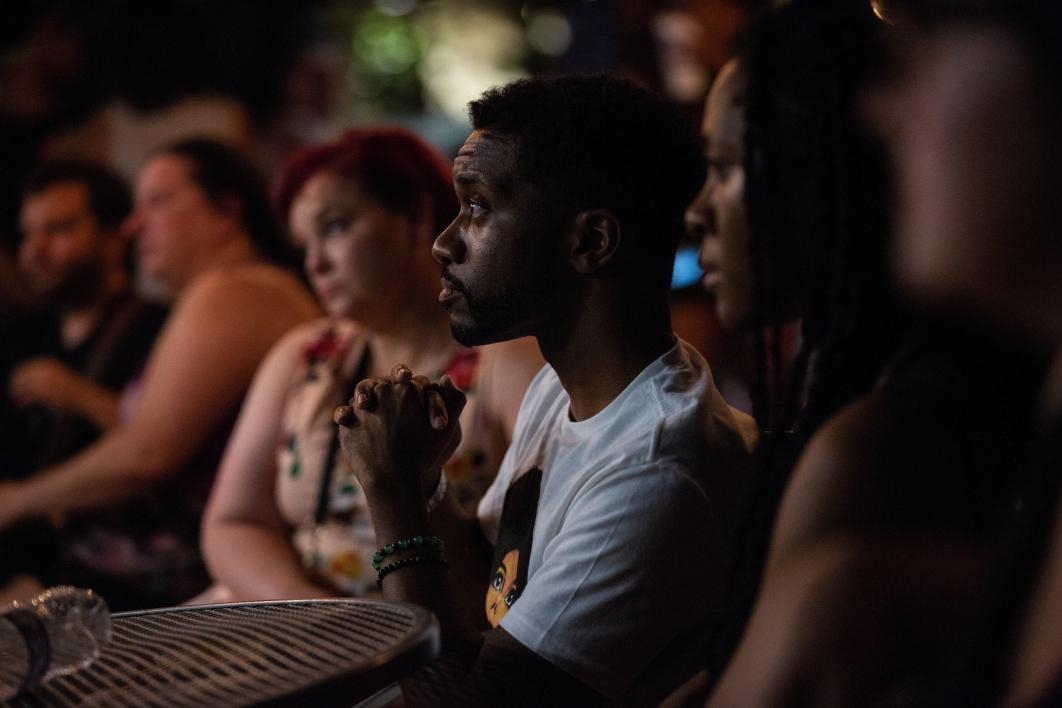 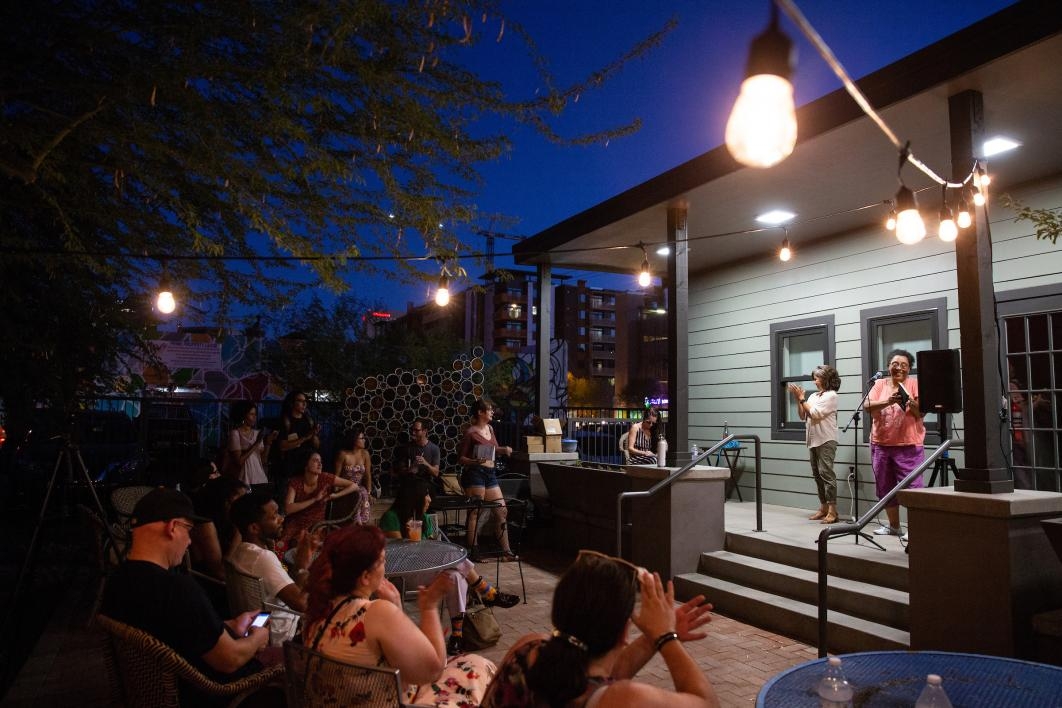 At the August First Friday Poetry event, attendees read poems in both Spanish and English.

There are even some regulars. Phoenix resident Marilyn (last name withheld) has been coming for the past four months along with her boyfriend and his young cousins.

“It’s very positive for the community,” she said. “It’s something that can show the kids how to express themselves constructively.”

Jazmin Andrade, one of the cousins who has been coming along with Marilyn and a sophomore at Xavier College Preparatory, said the event intensified her interest in her honors English course and even inspired her to participate in the national Poetry Out Loud recitation competition at her school.

Dombrowski’s dalliance with First Fridays began during the early 2000s, which she recalls fondly as its “heyday.” As she progressed at ASU from an undergrad to a doctoral student to a lecturer, she and her coterie of literary aficionados would head downtown every month and plant a folding table in one of the empty lots along Roosevelt to hawk issues of student lit magazines.

Over the years, she has organized a host of events, including the Phoenix Poetry Series, which highlights the work of two local writers per month, and founded a variety of publications — including Rinky Dink Press, which publishes in poetry in “microzine” format — that bring academic and self-taught writers together in the name of literature.

“It’s home for me,” Dombrowski said of the local writing community. “I’m a street poet. I was reared by street poets in downtown Phoenix.”\

The September meeting of First Friday Poetry begins around 7:30 p.m. when Dombrowksi steps up to the microphone to welcome attendees and announce the theme for the evening: the launch of Rinky Dink Press’ fifth poetry series, four-and-a-half-by-three-inch issues of which are on sale throughout the evening for a dollar apiece.

“If you don’t know what a microzine is, go to the merch table and find out,” she teases the crowd with a smile. “That’s why you’re here at First Friday: to get educated!”

Between each reading, Dombrowski announces First Friday Poetry again to the latest flock of onlookers to form at the edges of the patio before introducing the next poet and reminding everyone to support local poets and buy it if they like it.

Rinky Dink Press, she explains, is her heart. It evolved out of an English course she taught at the Downtown Phoenix campus, and her students, some of whom are now graduated, still contribute artwork and poetry or serve as editors.

One of them, Sophia McGovern, has been with Rinky Dink Press since it grew from a late night “kitchen-table conversation” in Dombrowski’s home. She edits but has also written for the publication and will represent it next March at the Association of Writers and Writing Programs conference — an enviable position considering AWP’s prestige in the literary world.

Another of Dombrowski’s former students, Tonissa Saul, also an editor for Rinky Dink Press, said, “It’s good to have a local press to help you get to know local writers. It lets you continue your craft and build relationships, even after you’ve left school.”

As the evening winds down, Dombrowski’s energy level does not.

“There are so many people here who are hungry for art,” she said, and it’s clear she’s keen to feed them.

Judging from the number of people who stop in their tracks just outside the patio, looking on in apparent wonder, she may well get her wish.