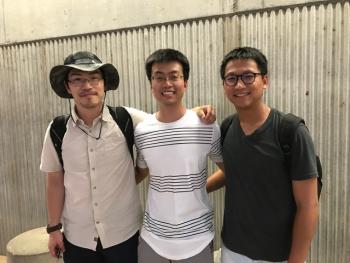 The team programmed rules for the commentator agent based on a human’s observation of the playfield. Basically, a human commentator can look at the current states of motion of the players while being aware of those in the past. As such, the team submitted a learning-based model that enables the agent to interpret the current situation of a robot soccer game similar to a human commentator by observing past actions regarding the soccer ball’s location and speed.

It took about two weeks to write the comment-generating scripts, and another week to enrich the comments and rules.

Hsu and Zhou won the AI commentator competition and received a $5,000 prize for the quality of their play-by-play commentaries and short-term predictions of two soccer matches designated by an evaluation committee.

Mill Matness is set for Thursday, Oct. 11 while Mill Madness will be the following night, Friday, Oct. 12. ... Mill Matness is set for Thursday, Oct. 11 while Mill Madness will be the following night, Friday, Oct. 12.