Twenty years ago, an ebullient, young assistant professor named Omar Yaghi sat down in Professor Michael O’Keeffe’s office in what was then the Arizona State University Department of Chemistry and Biochemistry. O'Keeffe asked him if he could synthesize a particularly beautiful, complex crystal in his lab. Yaghi brashly replied, “Of course!” And so began the field now known as reticular chemistry.

“It was a relationship born in heaven,” said Austen Angell, Regents’ Professor in the School of Molecular Sciences.

Now, the Royal Swedish Academy of Sciences has announced that ASU Emeritus Regents' Professor O’Keeffe and Yaghi, of the University of California, Berkeley, have won the prestigious Gregori Aminoff Prize in Crystallography for 2019, “for their fundamental contributions to the development of reticular chemistry."

“This is a well-deserved achievement by one of our most famous scholars,” said Professor Neal Woodbury, director of the School of Molecular Sciences in the College of Liberal Arts and Sciences at ASU. “Professor O’Keeffe has performed decades of groundbreaking work on the fundamental structure and properties of molecules and materials. He has been a pioneer in the creation of materials made from linking molecular building blocks into porous frameworks, a field that has been used to develop everything from catalysts to materials for specific chemical separation processes.”

An early example of a MOF with a two-periodic net formed of strong bonds was what is now known as MOF-2 from the Yaghi group. In this compound, square "paddle wheels" containing two zinc atoms are linked in a periodic square array. Microporosity and high surface area was evidenced by the ability to adsorb gases at low pressures.

O’Keeffe explained: “Those who went to conferences where such materials were discussed two decades ago heard the chorus: 'They won’t be stable.' They were. 'The frameworks will collapse when solvent is removed." They didn’t. 'They won’t be porous.' They were — they adsorbed gases at low pressures and had "permanent" porosity."

O’Keeffe recalls his initial response when he and Yaghi were colleagues at ASU and the young professor showed him the structures of MOF-2 and MOF-3: "There are simply too many atomsThis was a play on the words, "My dear young man ... your work is ingenious ... there are simply too many notes,’’ uttered by the emperor to Mozart in Peter Shaffer’s play "Amadeus."."

O’Keeffe came from the austere world of metal-oxide chemistry and found structures with benzene rings and carbon-hydrogen bonds far too baroque for his taste. No doubt with tongue in cheek, Yaghi thanked him in the MOF-2 paper for his "interest." 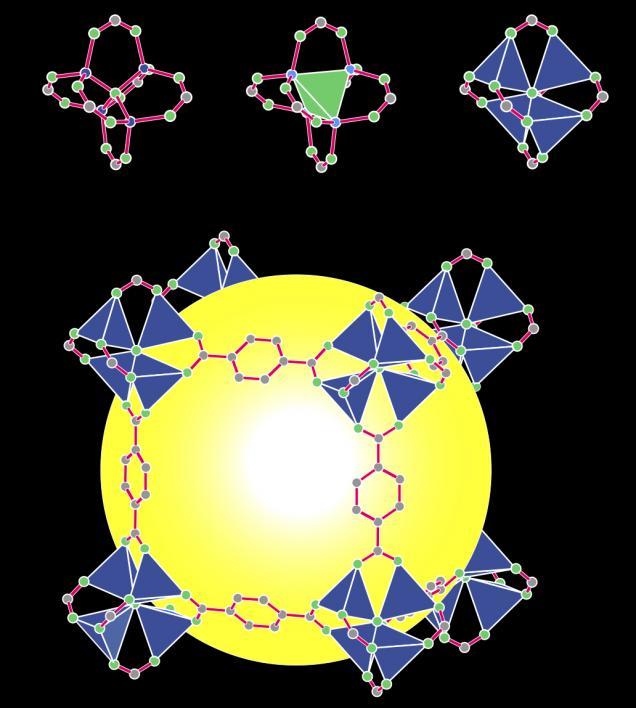 The now-iconic MOF-5 structure. It has unprecedented surface area, porosity and stability. It opened a whole new field of chemistry and was an initiation point for a productive collaboration between Omar Yaghi and Michael O'Keeffe on the topology of MOFs. 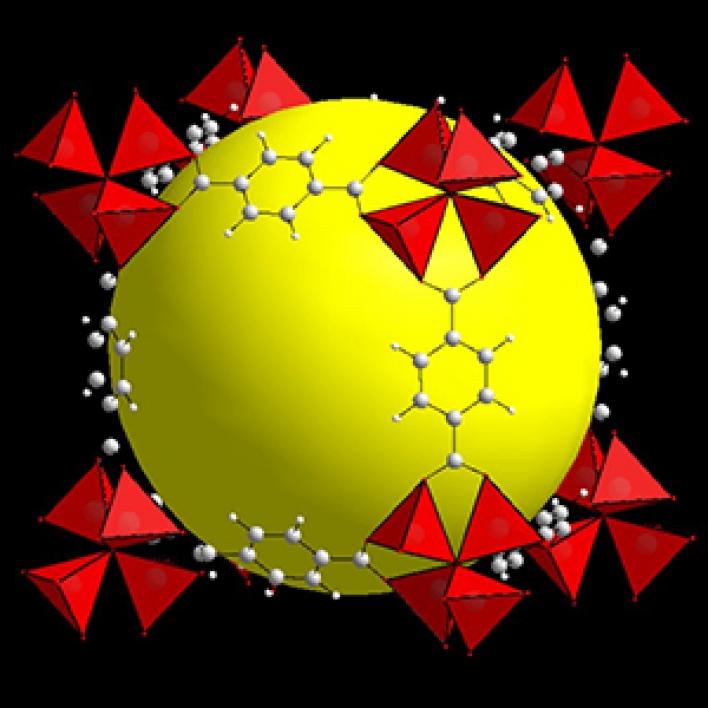 The yellow ball in the center of the MOF-5 structure indicates the empty space which can be used to store gases. 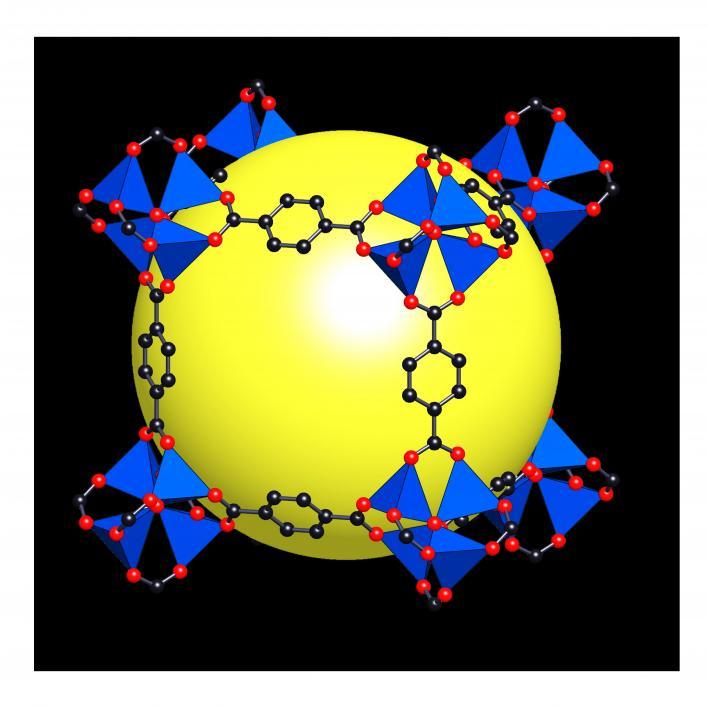 But the now-iconic MOF-5, which came shortly thereafter and earned O’Keeffe, Yaghi and coworkers a publication in Nature, changed everything. This had truly unprecedented surface area, porosity, and stability. The zinc carboxylate cluster with the six carboxylate carbons forming a regular octahedron but with tetrahedral symmetry was elegantly beautiful especially when linked in such regular arrays — by, yes, those benzene rings — like terra-cotta warriors, and O’Keeffe jumped aboard the bandwagon.

MOFs also have exceptional promise as materials to remove carbon dioxide from the emissions of power stations burning fossil fuels. They are therefore important components of the switch to cleaner energy production.

MOFs have many other applications in chemical industry, such as separations of chemicals and catalysis to speed up specific chemical processes. The subject is one of the fastest-growing areas of materials chemistry: Thousands of new compounds are reported every year.

The prize ceremony will be held at the annual meeting of the Royal Swedish Academy of Sciences on March 31, 2019. A symposium on the theme of the prize will be organized in association with its awarding.

Researchers are on the lookout for hydrogen, a key component of water, thought to reside in the moon’s ever-dark craters. Craig Hardgrove tells us how the first self-propelled, shoebox-sized spacecraft could reveal the whereabouts of water on the moon, and what that means to Earthlings.The Arizona State University School of Earth and Space Exploration assistant professor explains why small space... 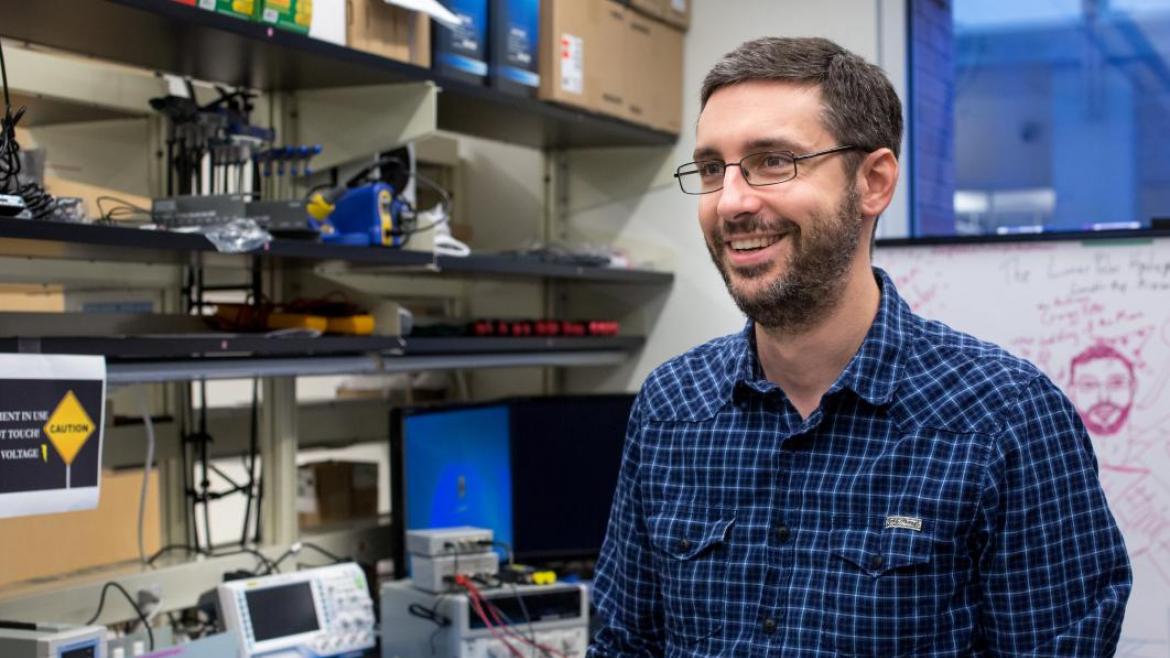 Researchers are on the lookout for hydrogen, a key component of water, thought to reside in the moon’s ever-dark craters. Craig Hardgrove tells us how the first self-propelled, shoebox-sized spacecraft could reveal the whereabouts of water on the moon, and what that means to Earthlings.

The Arizona State University School of Earth and Space Exploration assistant professor explains why small spacecraft allow for bigger experimental risk, and how when it comes to these tiny travelers, less can mean more.

Hardgrove's talk is part of the ASU KEDtalks series. Short for Knowledge Enterprise Development talks, KEDtalks aim to spark ideas, indulge curiosity and inspire action by highlighting ASU scientists, humanists, social scientists and artists who are driven to find solutions to the universe’s grandest challenges. Tune in to research.asu.edu/kedtalks to discover how researchers are attacking locust plagues, why baby steps are not the best way to achieve change and more.