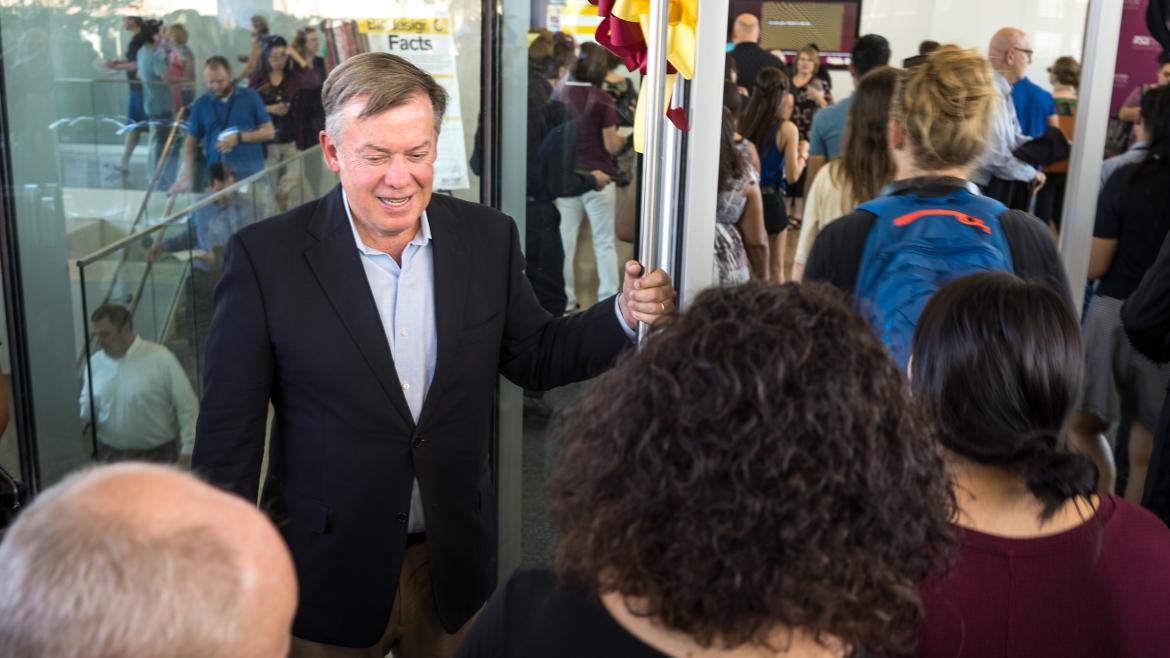 Science at the forefront at Biodesign C grand opening

The mission of the Biodesign Institute at Arizona State University started with the desire to replicate a single blade of grass.

That’s what President Michael Crow told a crowd of about 450 researchers, faculty, staff, students, city and state education officials, and members of the public gathered Monday to celebrate the opening of Biodesign C, the third of four facilities planned to accommodate the institute’s cutting-edge research efforts.

Crow referred to the accomplished American inventor Thomas Edison’s notion that the answers to mankind’s ills lie in nature: “Until man duplicates a blade of grass, nature can laugh at his so-called scientific knowledge. Remedies from chemicals will never stand in favorable comparison with the products of nature, the living cell of the plant, the final result of the rays of the sun, the mother of all life.”

“The idea for the Biodesign Institute was basically, could you gather scientists, engineers, dreamers, thinkers, ambitious individuals … (and) find a way to … replicate the simplicity and the beauty and the elegance of the work of a single blade of grass,” Crow said, because the second you can understand how to replicate that blade — or the body’s immune system, for instance — you can create real, lasting solutions to health challenges, environmental challenges, energy challenges, national security challenges and more.

The new five-story, 191,000-plus-square-foot building gives scientists even more space to realize those visions, with high-quality wet lab space for chemistry, engineering and the biological sciences arranged in a “neighborhood”-style open layout that encourages collaboration.

“It’s meant to cause scientists to collide with each other, and that’s important because it is in individuals colliding with each other that new ideas emerge,” said Joshua LaBaer, the Biodesign Institute's executive director.

The $120 million project was planned with nature in mind. Funding for construction came from “green bonds” that promote environmental sustainability. Copper screens on the exterior help regulate temperature to save energy, and wastewater will be collected to further research into the development of a university-wide reusable wastewater system.

“Stone-age thinkers think that digging things out of the ground, lighting them on fire, polluting the atmosphere and boiling water to produce movement of machines to produce electric signals is somehow an advanced form of human existence,” Crow said.

Visitors at Monday’s grand opening were invited to tour the space, where they were able to view a roughly 7-foot-long 3D model of the world’s first compact X-ray free-electron laser (CXFEL) — a key drug discovery and bioenergy research tool — and step inside the vault where it will be located in the basement of Biodesign C.

The CXFEL is a highly sensitive piece of equipment that allows scientists to peer deep inside proteins to better understand the action of molecules critical to cancer and other devastating diseases, and also how plants convert sunlight into renewable energy. It requires a controlled environment to ensure accuracy.

The vault, a true feat of construction engineering, is complete with vibration-proof flooring, to minimize interference from passing light-rail trains, and a 4-foot-thick, 36,000-pound lead-shielded door to reduce magnetic fields in building materials and contain the energy from the laser beam.

Currently, there are only four XFEL facilities worldwide, resulting in a traffic jam of scientific demand that is slowing down potential research. ASU’s CXFEL will be about 100 times smaller and cheaper than a typical XFEL, and it is expected to relieve the gridlock and attract leading scientists from around the world.

Up on the fifth floor, visitors were able to observe a real human brain in the area that will belong to the ASU-Banner Neurodegenerative Disease Research Center, an interdisciplinary collaborative of researchers poised to become one of the world’s largest teams of translationalTranslational refers to research whose findings can be translated from basic science to enhance human health and well-being through medical practices. neuroscientists in the fight against Alzheimer’s, Parkinson’s and other neurodegenerative diseases.

The NDRC, established in 2017, is notable for its intentional leveraging of expertise from several areas — including brain imaging, genomics and data analyses — which has helped put Arizona on the map as a destination for leading neuroscience researchers.

The decision to locate the center on ASU’s Tempe campus was influenced largely by the plethora of resources available to researchers here, including the state-of-the-art physical space itself, as well as an abundance of students eager to contribute to impactful research.

“I could not be more grateful to President Crow and his ASU colleagues for their extraordinary commitment,” said Eric Reiman, a university professor of neuroscience at ASU and chief executive officer at Banner Research. He views the breadth of skill within the center as instrumental in the discovery of better treatment options.

“Ninety-nine-point-eight percent of Alzheimer’s treatments found in the last 12 years that have been discovered through traditional research mechanisms have failed to work,” he said. “We’re emphasizing a strategy that fosters close working relationships between researchers who study human beings with and without these disorders, along with experimental researchers who use cellular or small animal models.”

And they’re already making headway. For instance, Assistant Research Professor Ben Readhead and his colleagues used donated brain data to conduct the most rigorous study to date on the viral contribution to Alzheimer’s, and Associate Professor Salvatore Oddo and his colleagues conducted a groundbreaking study to implicate a mechanism to account for brain cell death in a genetically engineered mouse model of Alzheimer’s. 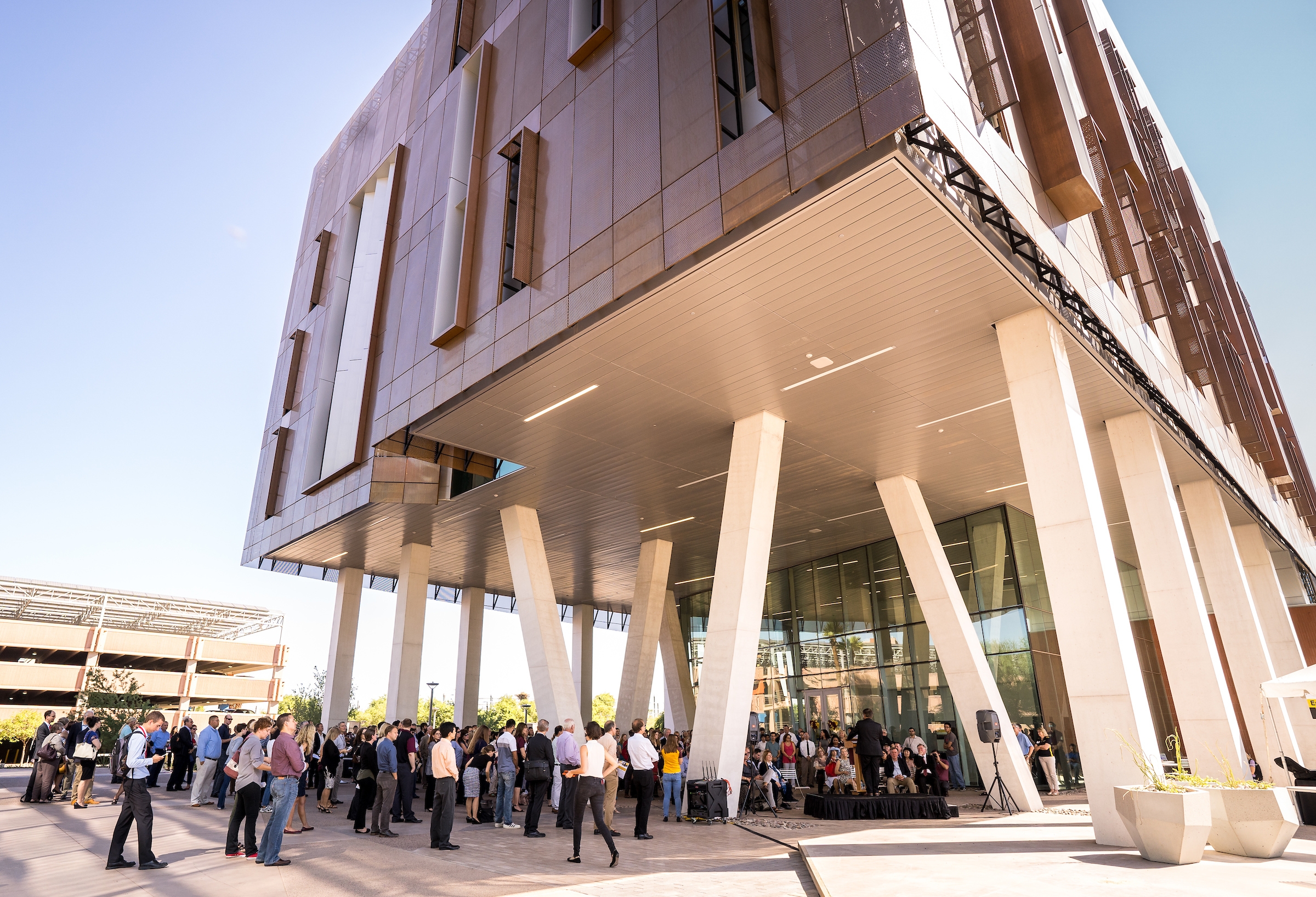 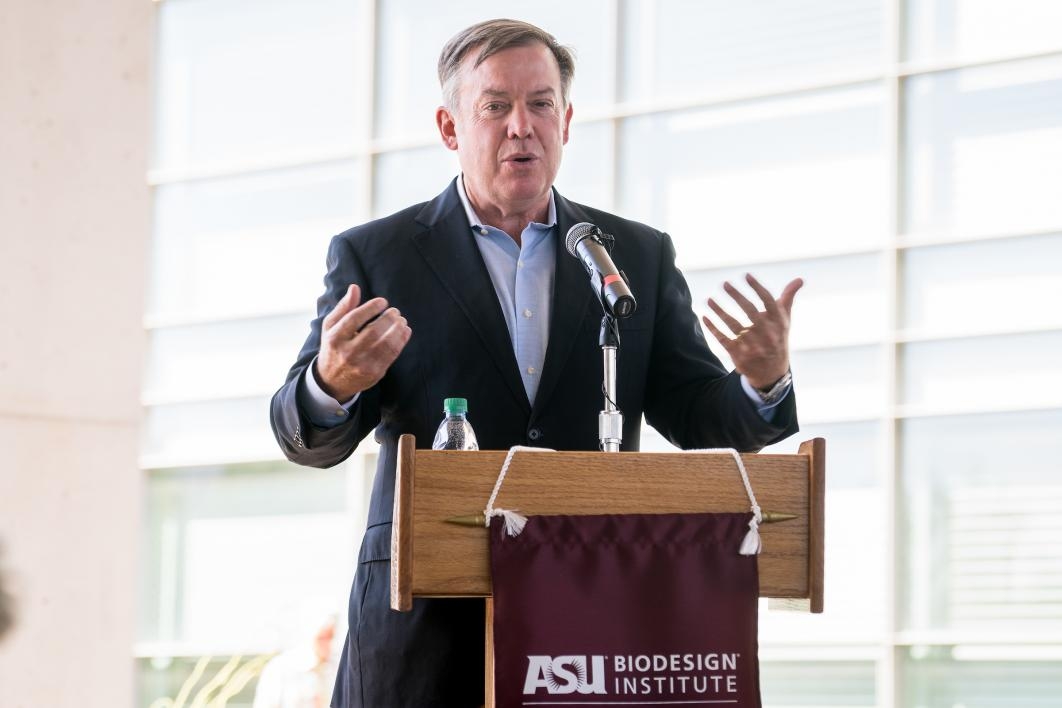 ASU President Michael Crow speaks at the grand opening on the Tempe campus. 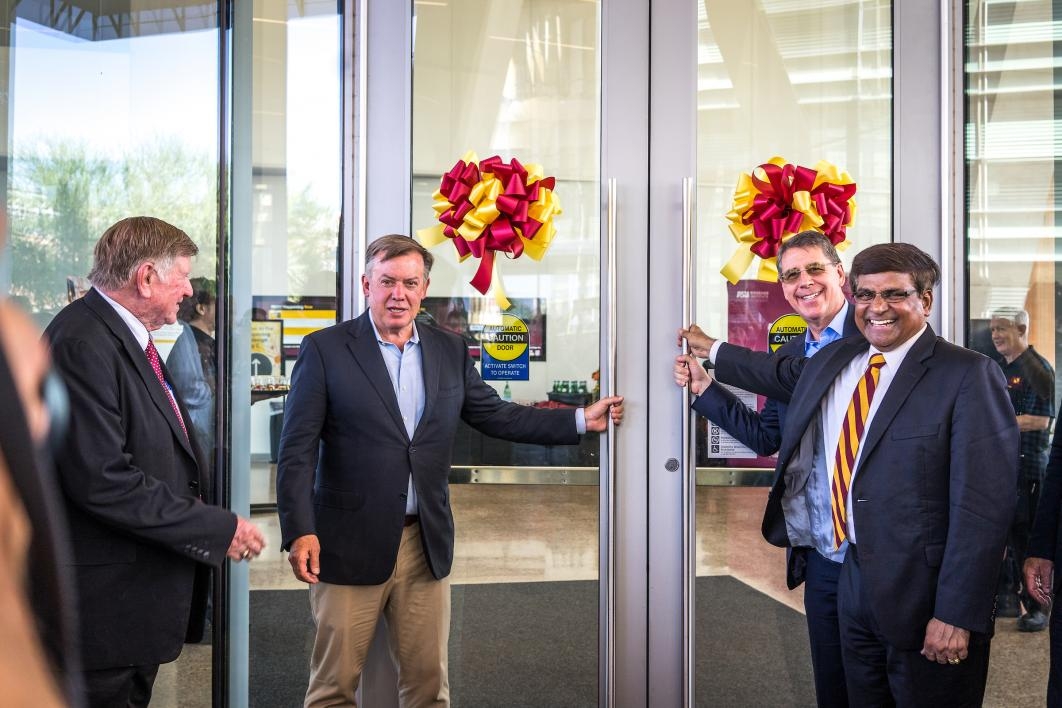 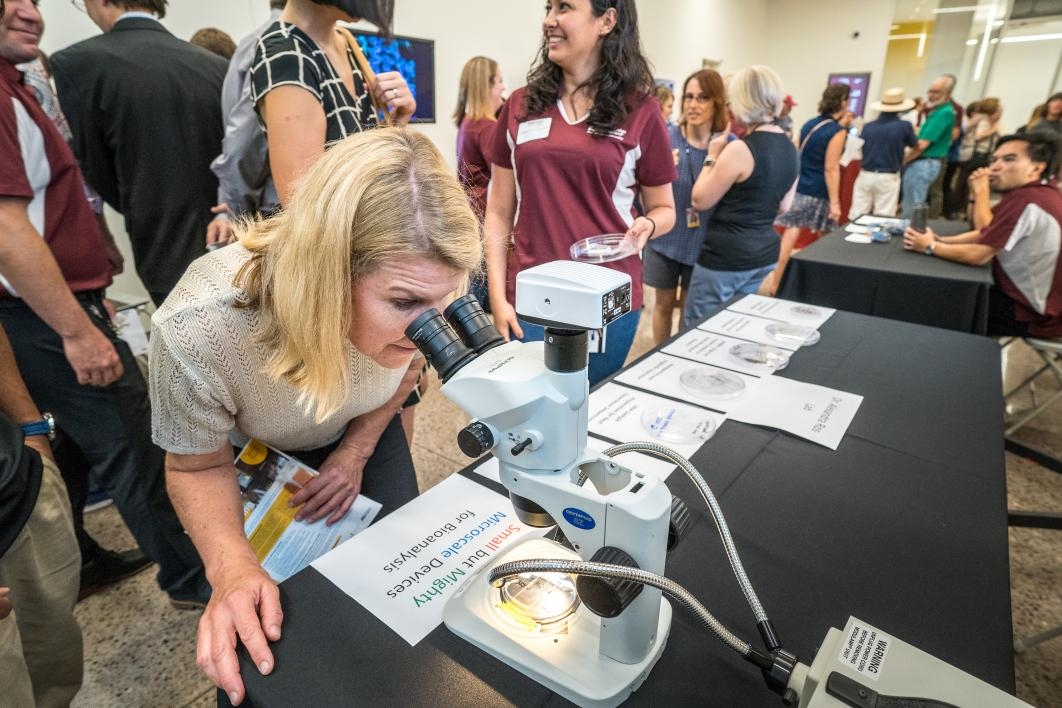 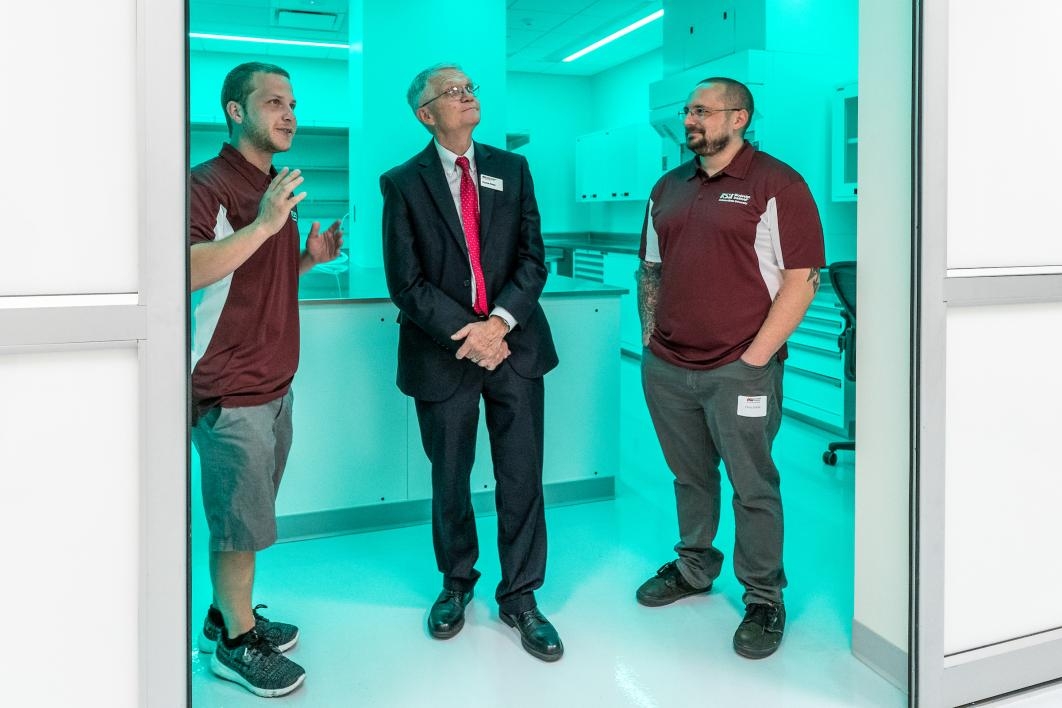 Doctoral candidate Zachary Dobson (left) and postdoc Chris Gisriel (right) explain to Duane Roen, campus vice provost and dean of the College of Integrative Sciences and Arts, the purpose of green light in one of the labs at the grand opening of Biodesign C. 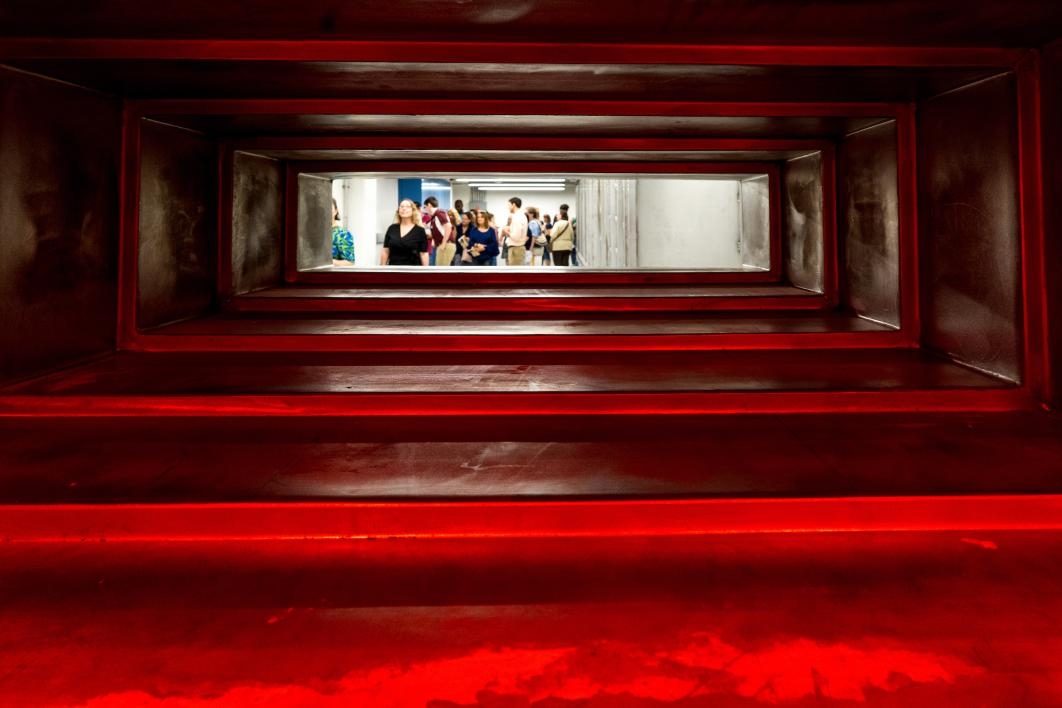 Visitors investigate the vault that will house the 10-meter-long X-ray laser at Biodesign C. 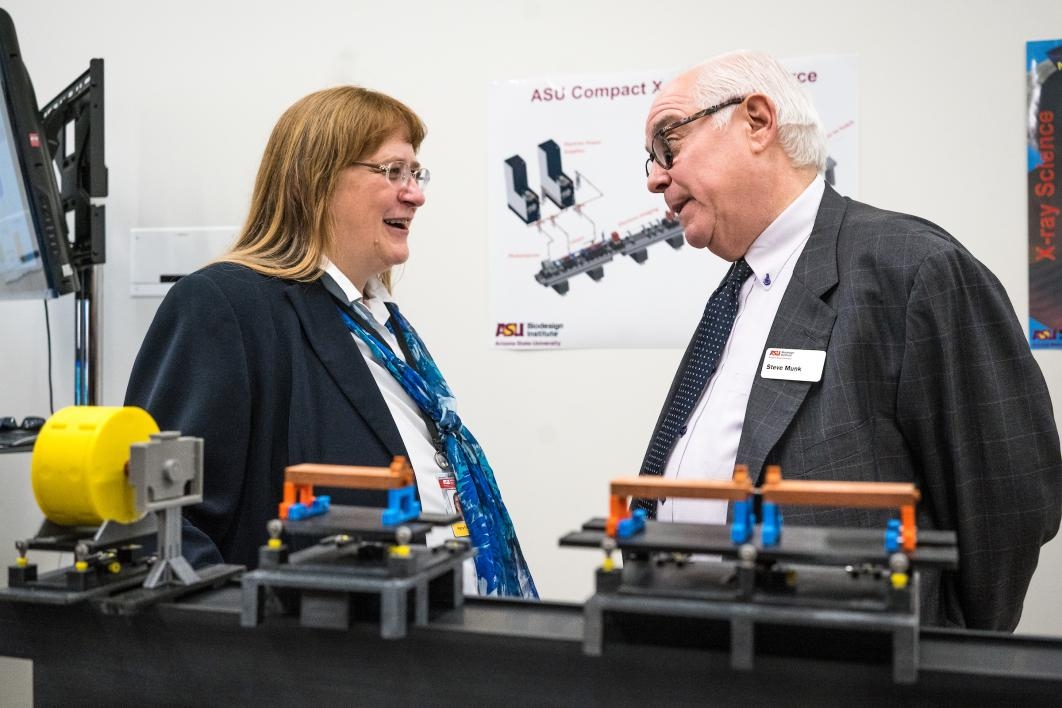 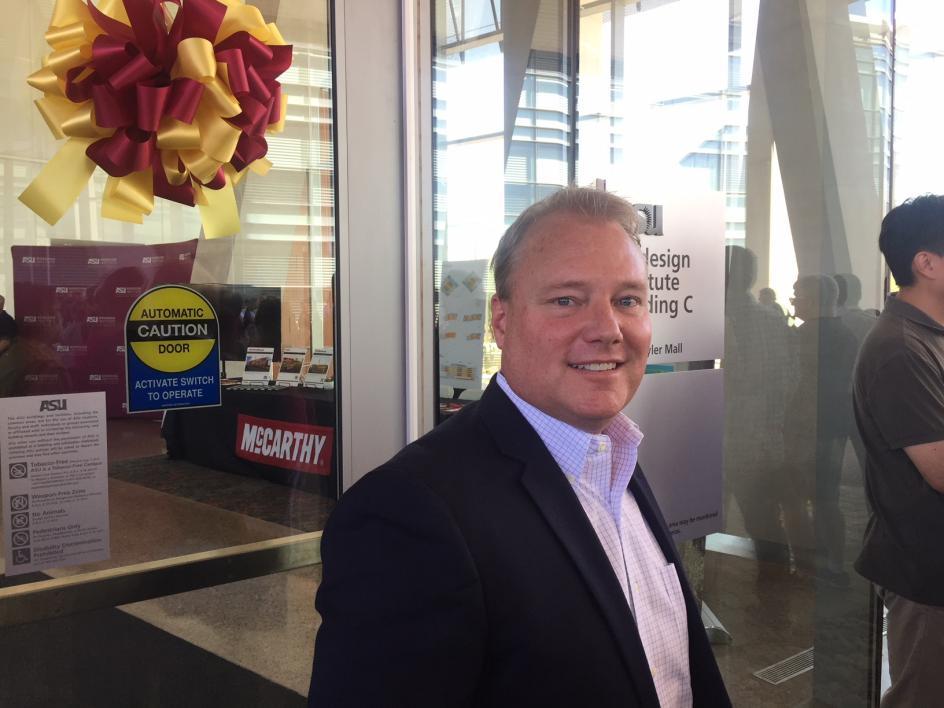 Tempe Mayor Mark Mitchell was among the guests checking out the new Biodesign Institute Building C on Monday morning.

Outside Biodesign C, visitors were treated to a delightful menagerie of cactuses whose arms were capped with bulbous, brain-like nodules or otherwise undulated like a flamenco skirt in motion. They’re part of a garden of genetically mutated cactus called “Endless Forms Most Beautiful,” created by ASU researchers Athena AktipisAthena Aktipis is an assistant professor in the Department of Psychology at Arizona State University and co-director of the Human Generosity Project, the first large-scale transdisciplinary project to investigate the interrelationship between biological and cultural influences on human generosity. and Carlo MaleyCarlo Maley is an associate professor in the School of Life Sciences and a biologist who specializes in cancer, evolution and computational biology. He will lead the new Arizona Cancer and Evolution Center, to be established at ASU thanks to an $8.5 million grant from the National Cancer Institute. in the hope of spurring dialogue that moves society’s understanding of cancer from one of potentially fatal eradication to manageable control.

“Crested cacti are a beautiful example of how cancer can show up in plants but also be lived with,” Maley said.

A Pitchfunder campaign to support continued expansion of the garden launched Monday.

The garden harkens to research being conducted on Biodesign C’s second floor, where scientists in evolutionary biology and molecular sciences are already hovering over petri dishes, intent on unlocking clues about genetics, aging and disease.

Early in the day, Executive Vice President of Knowledge Enterprise Development at ASU Sethuraman “Panch” Panchanathan said the work being done at Biodesign is a reflection of the spirit of the university, recently named the most innovative in the nation for the fourth consecutive year.

“We are the fastest growing research university in the U.S. … by a long shot, all public and privates schools included,” Panchanathan said. “For a university without a medical school to do that is truly a remarkable achievement, and that’s because of assets like the Biodesign Institute.”

Top photo: ASU President Michael Crow welcomes visitors to the grand opening of the Biodesign Institute Building C on Monday. The third of four structures of the institute will be home to the world's first compact X-ray laser and other labs and research-support space. Photo by Charlie Leight/ASU Now

The coach who won ASU's first Pac-10 title has passed away. Rest in peace George Boutell. ... The coach who won ASU's first Pac-10 title has passed away. Rest in peace George Boutell.