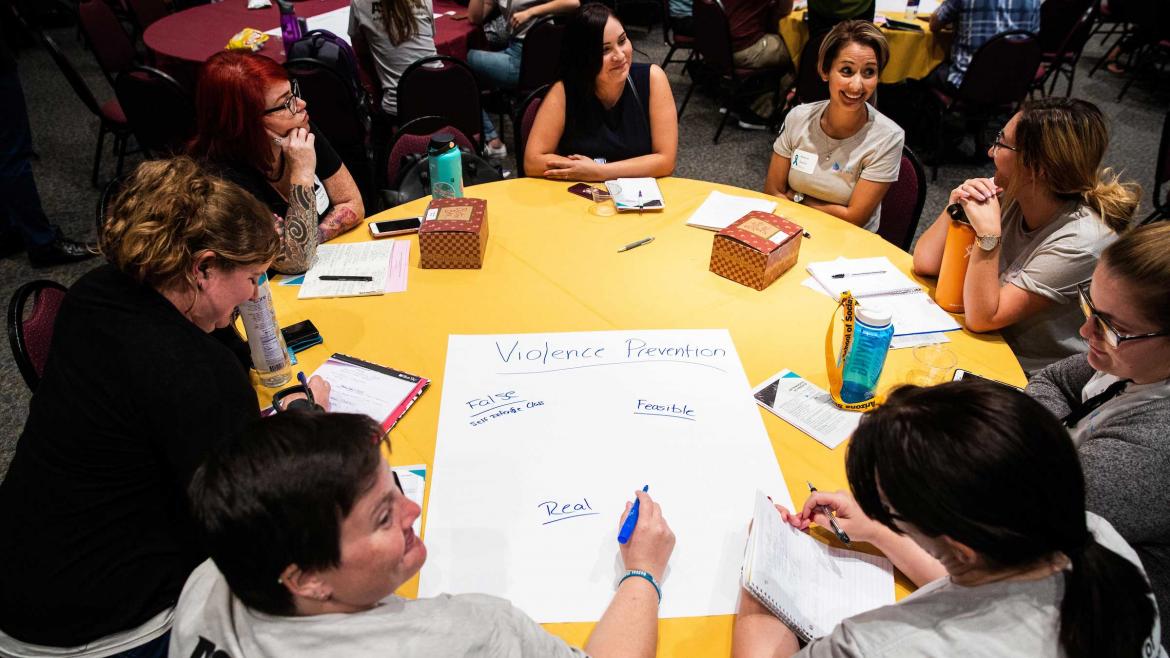 Conference at ASU puts gender-based violence in the spotlight

Social workers need to be on the front lines of imagining a world without oppression — the key to ending gender-based violence, according to experts at an Arizona State University conference on Wednesday.

“We need to envision a world without violence, a world centered around fierce, radical love and courage,” said Allie Bones, CEO of the Arizona Coalition to End Sexual and Domestic Violence. That organization partnered with the ASU School of Social Work on the daylong conference at the West campus, titled “Promoting Just and Effective Solutions to Ending Gender-Based Violence.”

“It was said that social work is about being anti-oppression, and as social workers we need to understand our role is to have that perspective,” she said, “whether it’s meeting the immediate needs of people who have experienced domestic violence and trauma or working in systems that need to be changed.”

ASU is expanding its reach into the community to help domestic-violence survivors. Jill Theresa Messing, an associate professor in the School of Social Work and part of the faculty of the Office of Gender Based Violence, announced three new initiatives at the event.

In the biggest change, more social work students will get paid while they intern with community agencies. For the past three years, the School of Social Work has had a grant from the federal AmeriCorps program to pay stipends to social work undergraduates and graduate students, who are required to have internships with social service agencies. Typically, those internships are unpaid, but under the AmeriCorps program, the students get stipends as well as additional training.

Under the expansion, not only will more students be in the program but they’ll be working at agencies that don’t necessarily focus on domestic violence explicitly but who serve survivors of domestic violence, such as organizations that work with the homeless. This will allow all types of agencies to use evidence-based interventions to help domestic-violence survivors.

The expanded program will be called Survivor Link.

“The logo has three intertwined links, which we’re thinking of as research, practice and education coming together in this idea of Survivor Link,” Messing said.

In addition, this year, for the first time, ASU has eight AmeriCorps Vista workers, who are full-time employees deployed to help agencies work on projects. Five are working with domestic-violence community organizations, and three are working in the Office of Gender Based Violence.

Also new this year, ASU is offering a domestic-violence certificate program, both undergraduate and graduate, for anyone who has an interest in working in this area, not just social workers. The potential students, who might be in law enforcement or public administration, will take a course that was created with the Arizona Coalition to End Sexual and Domestic Violence and have internships working with survivors.

The certificates will make ASU the only school on the West Coast to have a specialized curriculum in domestic violence, Messing said. 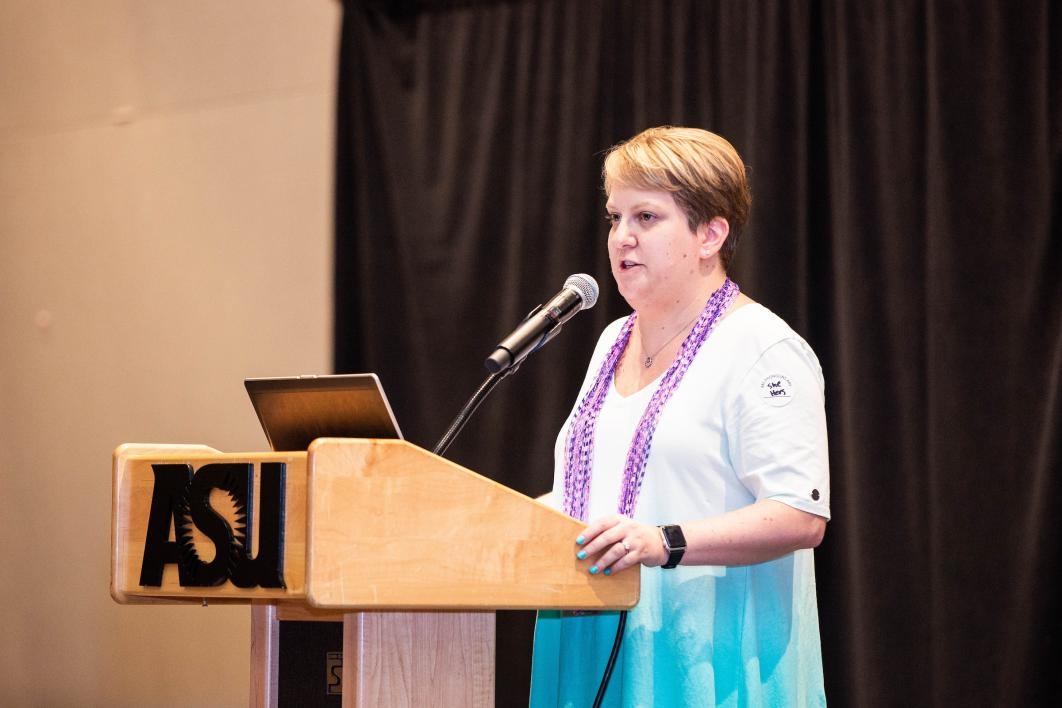 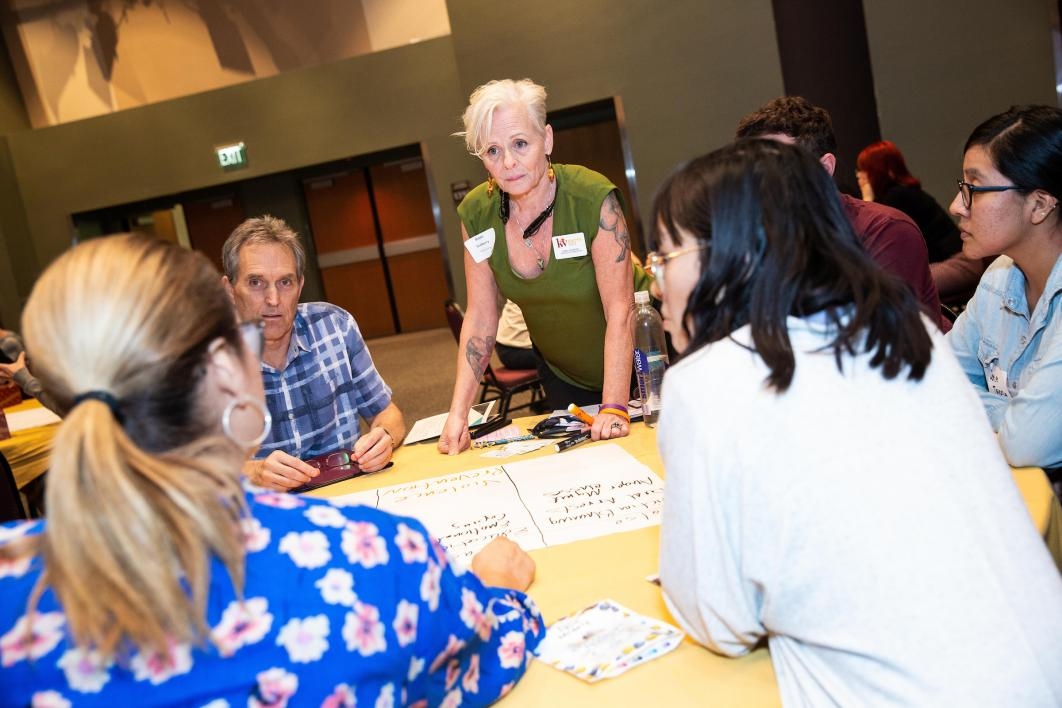 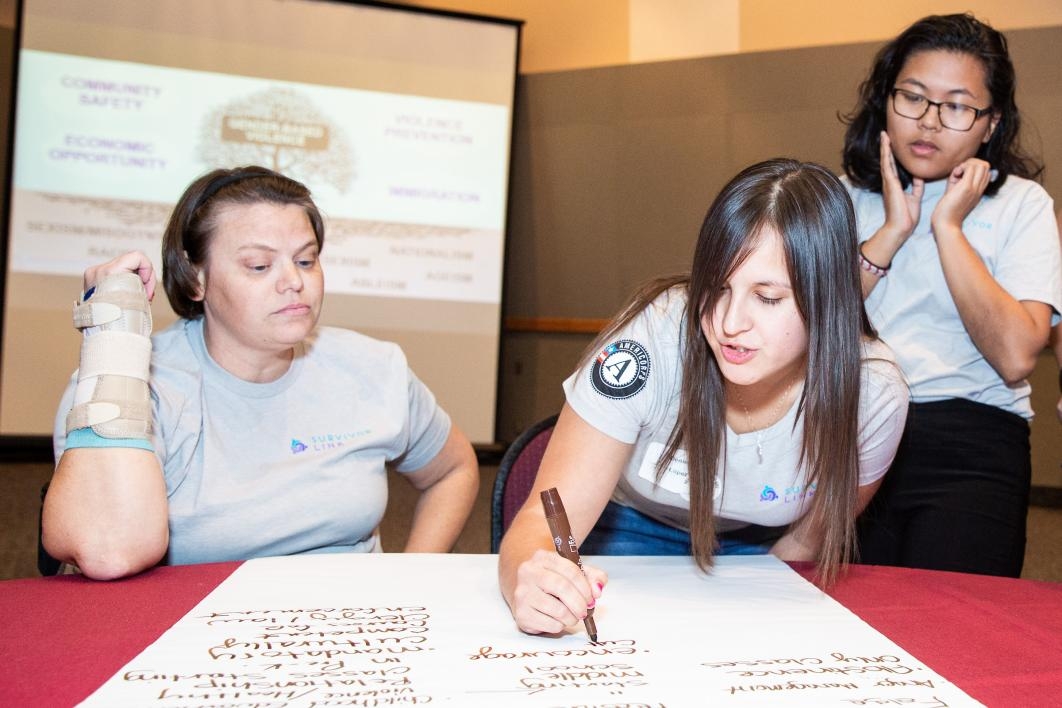 Jill Theresa Messing, an associate professor in the School of Social Work and part of the Office of Gender Based Violence, announced three initiatives: Survivor Link, an expansion of a grant from the federal AmeriCorps program to pay stipends to social work students; the existence of AmeriCorps Vista workers at ASU for the first time; and a domestic-violence certificate program. 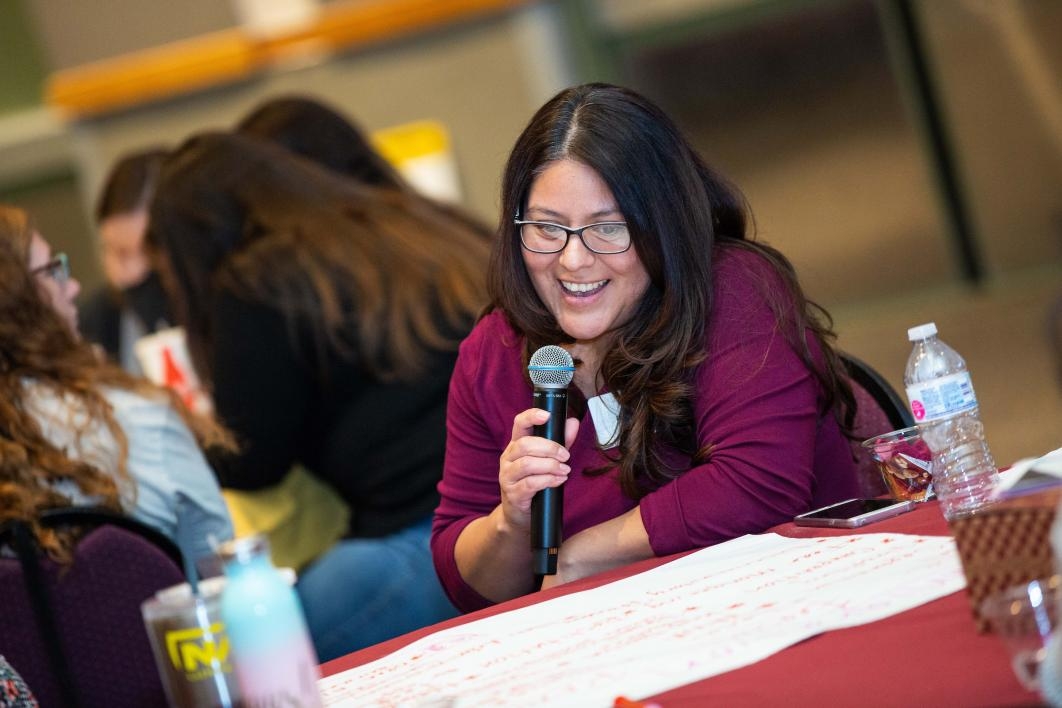 A New Leaf member Ruby Palacios reads off her group's answers to immigration issues during the solutions brainstorm session. 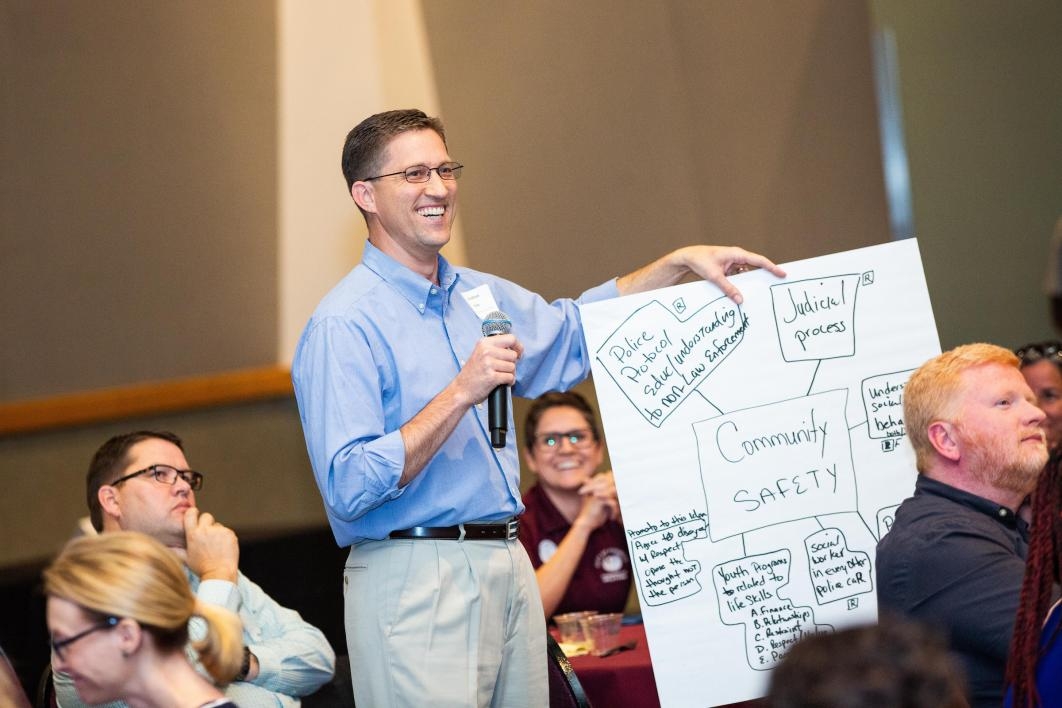 At the conference, the attendees broke into groups and discussed “real solutions” to gender-based violence, such as teaching healthy dating behavior in schools, as well as “false solutions,” such as the criminalization of domestic violence, which many say has ended up harming more people than helping.

“We focused especially on not just teaching women how to be safe but also, how do we get men to talk about not being abusers, to let out frustrations in safe ways and deal with emotions they’re not allowed to talk about?” he said.

“We talked about how we think one of the most important things is having all interventions be culturally informed so we can give people the help they need that best speaks to their situation.”

Cultural competency — understanding the nuances of domestic violence within specific cultures — was the topic of the afternoon keynote address.

Tricia Bent-Goodley, a professor at Howard University and a social worker, researches domestic-violence homicides in the black community. She described the many variables that play into the higher rates of deaths for black women. For example, they are less likely to ask for help from law enforcement or social service providers, mainly because of the fear that they will be arrested or their children will be removed — both of which are more likely to happen to black women than white women.

They’re also less likely to seek help because they face stereotypes such as the “angry black woman” or “strong black woman,” and many of the women have been socialized to protect black men, she said.

Bent-Goodley suggested that more domestic-violence interventions come from outside the criminal justice system because the threat of arrest deters many survivors who are in danger.

“This idea of me turning my husband or partner or father of my children over to a system that could hurt them, I’m not going to do that even if it hurts me,” she said.

“That’s where our cultural competence is very important because if we understand those dynamics, we can work through that as part of their care.”

Top photo: Members discuss their approaches to violence prevention through the discussion of false, feasible and real solutions to ending gender based violence, at a conference Sept. 12 hosted by the School of Social Work at the ASU West campus. Photo by Deanna Dent/ASU Now

Hockey 101: Understanding the Route to the NCAA & Beyond

21-year-old freshmen? NHL draft picks playing at ASU? How is all this possible? We have a Hockey 101 breakdown for our Sun Devil fans. ...

Hockey 101: Understanding the Route to the NCAA & Beyond 21-year-old freshmen? NHL draft picks playing at ASU? How is all this possible? We have a Hockey 101 breakdown for our Sun Devil fans.