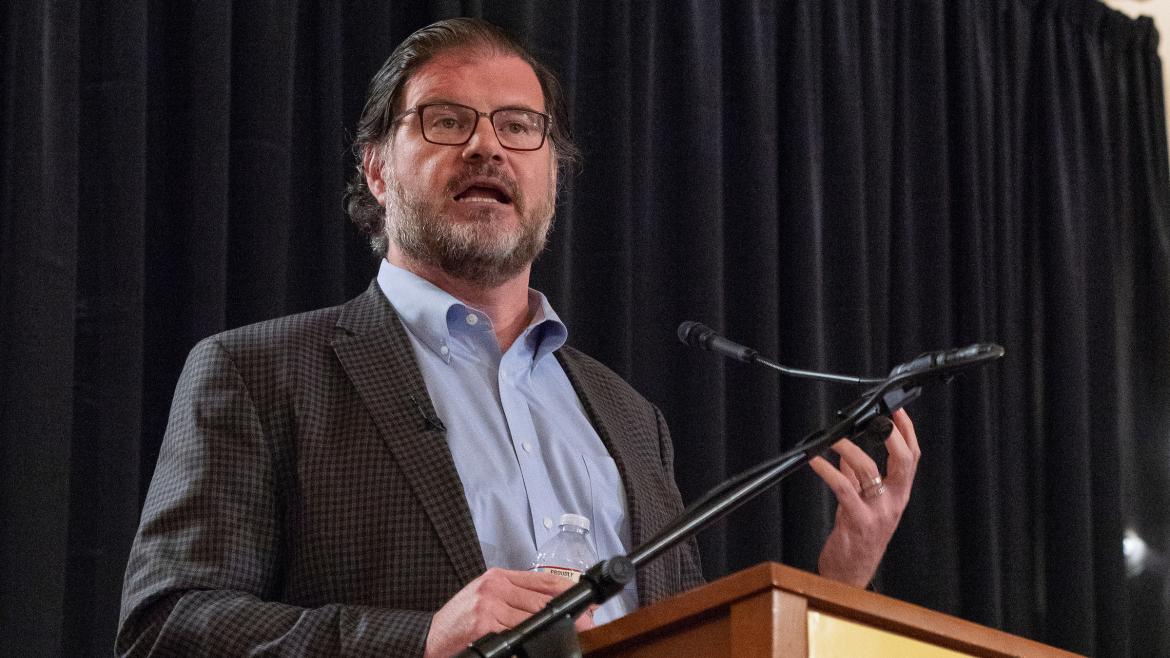 American democracy is eroding quickly, and it’s not being threatened by an outside force or another country. We’re doing it to ourselves — “identity politics” and hyper-partisanship are killing independent opinion and the free exchange of ideas, according to prominent journalist and media figure Jonah Goldberg.

“The problem we have today is that we’re supposed to take people as they are, how you find them. Instead we are reverting back to a very natural tendency of turning people who look differently than us, act differently than us, into abstractions. We are demonizing,” said Goldberg, senior editor at National Review and a Fellow at the American Enterprise Institute, in front of a crowd of about 250 people at Old Main in Tempe on Tuesday. “This has been going on in the academic left for a long time and this breaks my heart, but conservatives, right-wingers, are embracing it, too.”

Goldberg, also a nationally syndicated columnist and a columnist for the Los Angeles Times, was the inaugural speaker for the 2018-19 lecture series hosted by Arizona State University’s School of Civic and Economic Thought and LeadershipThe School of Civic and Economic Thought and Leadership is a new school at ASU that blends classical liberal arts education with experiential learning to prepare students to become leaders. Students confront diverse views on political, economic and moral philosophy; American political ideals; statesmanship and entrepreneurship.. Co-sponsored by the Walter Cronkite School of Journalism and Mass Communication and the Sandra Day O’Connor College of Law, this year’s theme is “Polarization and Civil Disagreement: Confronting America’s Civic Crisis.”

“The planning committee felt a duty ... to address one of the most contentious issues in higher education today: the hyper-polarization, extending to violence, about appropriate speech and invited speakers,” said Paul Carrese, director of the School of Civic and Economic Thought and Leadership. “We believe there is both intellectual and civic work to do in confronting this deterioration in higher education and in America’s capacity for self-governance.”

Carrese said selected speakers for this year’s series represent both ends of the political and social spectrum, hailing from academia and American public life and offering robust civil debate.

The majority of Goldberg’s Tuesday discourse stemmed from his new book, “Suicide of the West: How the Rebirth of Tribalism, Populism, Nationalism, and Identity Politics is Destroying American Democracy.”

Goldberg said that for 250,000 years, people existed on less than $3 a day. Only in the past 300 years has society reached a point where most people have been lifted out of mass poverty. He added that capitalism (which he called “The Miracle”) has produced an unbelievable “bounty of riches” and an “explosion of prosperity.”

However, he said, politics and divisiveness is threatening to turn it all upside down.

Goldberg said that lived experience, character and personality have been reduced to “thin abstractions” that flatten an otherwise dynamic populace and create tribes based on gender, race and party with little regard for diversity of opinion.

“What we need is variety. Let your flag fly free,” Goldberg said. “We have all of these arguments about going left toward socialism or right toward nationalism. But when you’re at the top of the mountain, left and right lose their meaning because the only direction you can go is down back into the muck.”

Goldberg said Americans are ungratefully throwing away what made the West the free and prosperous place it is today.

“We teach people not to be grateful for what we have,” Goldberg said. “If you don’t teach people gratitude, the opposite comes pouring in, which is a sense of entitlement and resentment. We teach people, ‘I gotta get mine.’”

Despite his diagnosis of civilization’s current ills, Goldberg did offer up some solutions and left the audience with this:

“There is no better system. There should be this understanding that we’ve got it pretty good," Goldberg said. "Have a little gratitude for where you are, because things could be a helluva lot worse."

The lecture series will continue on Oct. 11 with Mark Lilla’s presentation of “Identity and Citizenship.”

Top photo: Jonah Goldberg speaks on the "Suicide of the West" at an event hosted by ASU's School of Civic and Economic Thought and Leadership on Tuesday evening at Old Main on the Tempe campus. Photo by Marcus Chormicle/ASU Now

Maggie Walter has flown more than 8,000 miles to study how Native American children, families and schools in Arizona work to maximize educational outcomes. The 2018 Fulbright Scholar will also bond with fellow researchers and build on her body of work in indigenous-related research.Walter is an Australian sociologist, author and a palawa (aboriginal) woman descending from the Pairrebenne people ... Maggie Walter has flown more than 8,000 miles to study how Native American children, families and schools in Arizona work to maximize educational outcomes. The 2018 Fulbright Scholar will also bond with fellow researchers and build on her body of work in indigenous-related research.

Walter is an Australian sociologist, author and a palawa (aboriginal) woman descending from the Pairrebenne people of northeastern Tasmania. The pro vice-chancellor of aboriginal research and leadership at the University of Tasmania, Walter will spend the next few months at Arizona State University’s Tempe campus gathering data and stories for a potential new book.

ASU Now spoke to Walter days after she landed in the U.S. to discuss her work and research opportunities.

Question: Tell us about the work you'll be doing this semester.

Answer: My Fulbright program of work is based around two main activities: a comparative quantitative of educational outcomes for aboriginal and Torres Strait Islander children in Australia and Native American and Alaskan Native here in the United States, plus some policy analysis. And network building with indigenous scholars here who work in the area of indigenous education.

So while there will be some heavy-duty statistical work happening, I will also be out and about as much as possible meeting and talking with other scholars.

Q: Why did you specifically want to come to ASU?

A: I was inspired to come to ASU because Professors Bryan Brayboy and Tsianina Lomawaima are based here and I am an admirer of their scholarship in the field. I have much to learn from them. ASU is also located in an area of the U.S. with a relatively large Native American population; I really want to see some of the work happening in schools.

Q: Are there any similarities in the experiences of indigenous peoples in the U.S. and Australia?

A: Yes, there are very strong similarities in how disadvantaged our peoples are and the difficulties of living as an indigenous minority within a nonindigenous majority population. These similarities are very evident in relation to our children’s educational outcomes with both populations recording relatively low levels of educational achievement as measured within current schooling systems. But this is not just a story of underachieving — I am more interested in what indigenous people here in Arizona are doing to improve those outcomes in ways that are culturally safe and culturally strong and engaging with the scholarship around this.

Q: What are you most excited about with the Fulbright?

A: I am really excited about the opportunity to come and actually live and research here at ASU. This provides a wealth of opportunities to both grow my own scholarship as well as initiate collaborations and connections that are just not achievable through emails, visits or other ways of interacting.

Top photo: Professor Maggie Walter, sociologist and pro vice-chancellor of aboriginal research and leadership at the University of Tasmania, poses for a portrait outside the Virginia G. Piper Center for Creative Writing on the Tempe campus on Sept. 7, 2018. Walter will be at ASU this fall to connect her research on aboriginal people and Native American tribes in the Southwest.