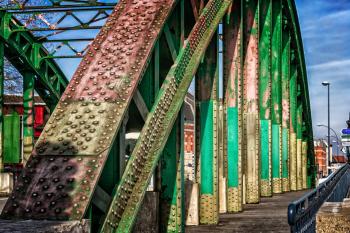 Stress-corrosion cracking is an environmental cause of premature failure in engineered structures, including bridges, aircraft and nuclear power generating plants. Photo by Pixabay Download Full Image

“The finding is the culmination of about 30 years’ work on this kind of stress corrosion problem,” said lead researcher Karl Sieradzki, a professor of materials science and engineering at ASU. “We now have a view into how new alloys can be designed to avoid this form of stress corrosion-induced failure.”

When metals are exposed to water containing salts, the strength of the metal can be severely compromised and lead to unexpected failure. An example of an SCC failure is the 2003 Kinder Morgan gasoline pipeline in Tucson, Arizona.

The conventional paradigm for understanding SCC conditions is the simultaneous presence of a sufficient level of tensile stress, a corrosive environment and a susceptible material.

The research challenges this viewpoint and illustrates that the simultaneous presence of stress and a corrosive environment is not a requirement for SCC, and that it can occur if the corrosion happens first and the material is subsequently subjected to stress. 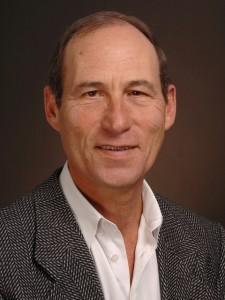 In addition to Sieradzki, the paper’s authors include Nilesh Badwe, Xiying Chen, Erin Karasz and Ariana Tse from ASU and Daniel Schreiber, Matthew Olszta, Nicole Overman and Stephen Bruemmer from Pacific Northwest National Laboratory. The research was supported by the U.S. Department of Energy.

The team examined the behavior of a laboratory model silver-gold alloy, which mimics the corrosion behavior of important engineering alloys, such as stainless steels and nickel-base alloys used in nuclear power plants.

Corrosion in these engineering alloys, as in the model silver-gold alloy, results in the formation of nanometer-sized holes within the corroded layer. According to Sieradzki, the key parameter determining the occurrence of rapid SCC is the adhesion between the corroded layer and the un-corroded alloy. Using the atomic-scale techniques of high-resolution electron microscopy and atom probe tomography, together with statistical characterizations, the team determined that the apparent requirement for the simultaneous presence of stress and corrosion exists because of time-dependent morphology changes that affect adhesion.

As long as adequate adhesion between the layers is maintained, a crack that starts with the corroded layer may penetrate into the uncorroded alloy. This means that there can be a significant mechanical component to stress corrosion cracking that cannot be identified by any measurement of corrosion. The result is that a corrosion measurement can underestimate the rate of SCC by multiplicative factors of 10 or more.

“In nuclear plants, SCC maintenance and plant shut downs are based on previous experience with similarly designed reactors,” Sieradzki explained. “While we are not building new nuclear plants in the U.S., these findings should trigger the search for new, corrosion resistant alloys that can be used for replacement parts in existing plants and in other important structural applications.”

Decades ago, oilmen had little interest in natural gas, the byproduct of crude extracted from the earth. So, they burned it off, like so many lit torches atop Texas’s oil fields. Jim Miller’s grandfather recalled reading the evening paper by their light. Miller, too, recalls living in their shadows. Now he’s living in the Valley of the Sun, working to develop a different kind of energy indus...

Decades ago, oilmen had little interest in natural gas, the byproduct of crude extracted from the earth. So, they burned it off, like so many lit torches atop Texas’s oil fields. Jim Miller’s grandfather recalled reading the evening paper by their light. Miller, too, recalls living in their shadows. Now he’s living in the Valley of the Sun, working to develop a different kind of energy industry.

The native Texan says he wanted to be a chemical engineer because the successful people he knew as a child either worked in chemical plants or they worked for NASA. “That was it,” he said. 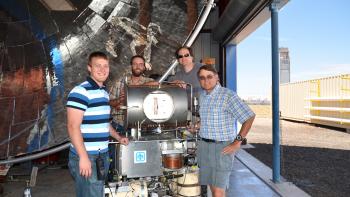 But years later, he found himself working not in a chemical plant nor at NASA but instead thinking up ways to create and harness alternative energy — energy gleaned not from fossil fuels but from renewable sources.

He has also worked on radioactive waste cleanup, catalysis, desalination and automobile exhaust treatment, all while serving as a research scientist at Sandia National Laboratories.

He is a chemical engineer by training. He is also a recent arrival at ASU LightWorks, where he once again will be thinking up ways to create and harness alternative energy — using sunlight, of course.

“Our focus is solar thermal chemistry,” said Miller. “The idea is to make a solar fuel.”

Plants and bacteria have been making their own solar fuel through photosynthesis for billions of years. Miller and his colleagues want to mimic that process.

“Plants take carbon dioxide out of the air,” said Miller. “They take water out of the ground, and through some biological magic, plants are made using the sun as the energy source. The carbon dioxide and the water are the building blocks.”

Over a long time, some of those plants turn into fossil fuels: coal, natural gas or oil. When we burn fossil fuels, we reverse the process of photosynthesis, dumping millions of years’ worth of stored carbon into the atmosphere much faster than it can be removed by plants.

So Miller and his colleagues are aiming to use a thermochemical cycle to ensure there is no net release of carbon dioxide. The cycle begins when a metal oxide is heated until it gives up some of its oxygen. At lower temperatures, the material wants that oxygen restored. If exposed to carbon dioxide or steam, the material will take an oxygen atom from those molecules to yield carbon monoxide or hydrogen, respectively.

Carbon monoxide and hydrogen are both energy-rich molecules, and they can be reacted with one another (in a separate process) to form more conventional hydrocarbon fuels, such as jet fuel, gasoline and diesel.

“You cycle between these two reactions,” explained Miller. “That’s why it’s called a thermochemical cycle. You use heat to drive the reaction, but it’s two steps. So there’s an inherent separation built into it. There’s a lot of good things about it, but there’s also a lot of complicating factors.”

The good things include the possibility to emulate photosynthesis; that is, to store sunlight as hydrocarbon fuels, but much more efficiently and with much less water consumption.

The complicating factors — some that remain to be discovered — are why Miller is joining the LightWorks team and the faculty in the School of Sustainability as a professor of practice. He will be working closely with Ivan Ermanoski, an experimental physicist and also a new arrival to ASU LightWorks, and Ellen Stechel, co-director of LightWorks and an expert in solar thermochemistry. Like Miller, both Ermanoski and Stechel worked at Sandia National Laboratories before coming to ASU.

“We are very excited that Jim is joining us in LightWorks and for the opportunity to build a platform program based on solar thermochemistry — for fuels, but also to make ammonia, to store energy and to produce clean water. I appreciate his ability to make complex concepts easy to understand and his unwavering dedication to solving important problems,” said Stechel.

“When we first envisioned making fuels from sunlight and thin air, there were people telling us that it is impossible, that we were violating the laws of thermodynamics,” she continued. “This did not faze or discourage Jim. There are challenges to making this a reality but it is not only possible (that is, not even new anymore) it is plausible. The person you want working to demonstrate that it can be made efficient, robust, scalable and economic is Jim. We expect many new collaborations with a range of faculty that engage with LightWorks, especially through our Sustainable Fuels and Products working group.”

Reflecting on what would be the ideal outcome for this bold, highly experimental endeavor, Miller said, “The perfect outcome is that we have closed the cycle on carbon so we’re not extracting fossil sunlight and putting it (the fossil carbon) back into the environment, maintaining the advantages of modern society, but staying mindful of future generations.”

This research is funded in part by the Department of Energy, Office of Energy Efficiency and Renewable Energy.