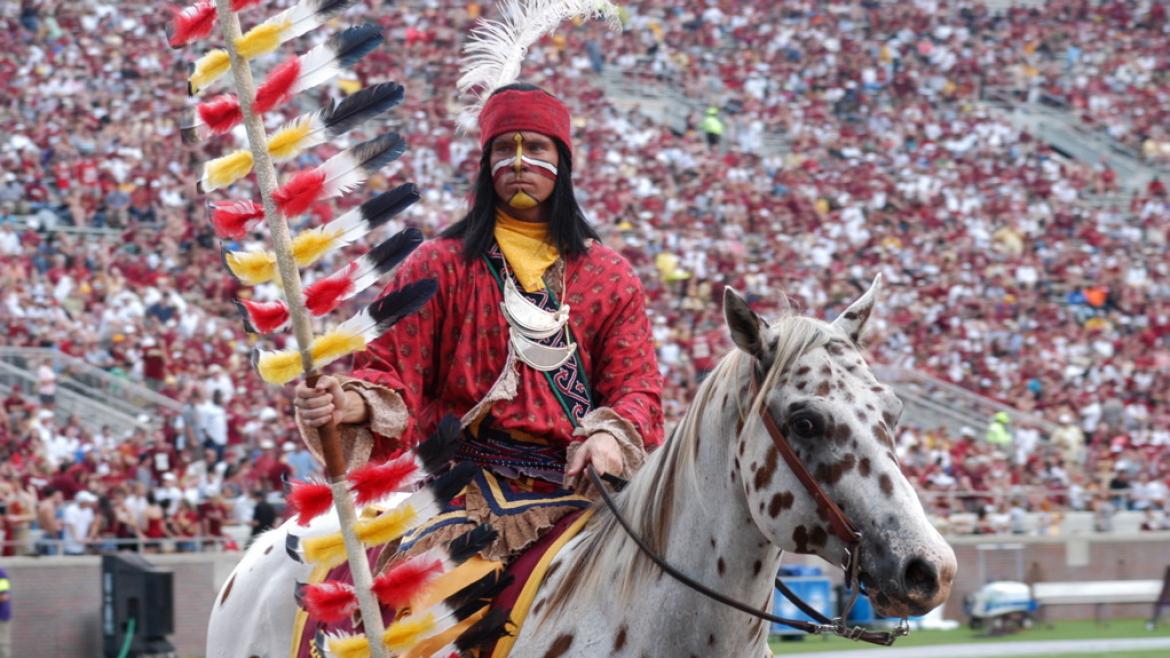 As football season returns, so does sports name controversy

Editor's note: ASU Now chooses not to use the word that is the proper name of the Washington NFL football team in this or any future story, given its nature to many in our community as a deeply hurtful racial slur.

The NFL season kicks off this weekend in Glendale with the Arizona Cardinals taking on the Washington football team, whose name has been the source of much controversy.

The Sunday matchup will draw thousands of fans to cheer for these two longtime rivals. It will also draw a smaller group of detractors to the game, Arizona to Rally Against Native Mascots, who will host a press rally and march of protest on the morning of the game. They claim that Washington's name is a “dictionary-defined racial slur rooted in the attempted genocide of indigenous people.” They are calling for the immediate retirement of the name and logo because it denigrates Native Americans.

And the problem isn’t limited to just one or two teams — it’s pervasive, according to Terry Kaiser Borning, a senior Drupal developer with ASU’s Enterprise Marketing Hub. Borning is the creator of MascotDB.com, a searchable database website for team names of high school, college and professional sports. He recently completed a link of sports teams past and present who use indigenous names and mascots. Some of those team names: Halfbreeds, Injuns, Squaws and Scalping Braves.

That’s simply unacceptable, says James Riding In, a founding member of ASU’s American Indian Studies Program and a citizen of the Pawnee Nation of Oklahoma. Riding In’s scholarly works have been published in numerous academic journals and books, and he has served as an expert witness in several legal cases, including Pro-Football Inc. v. Amanda Blackhorse (2015). He said sports teams who use indigenous names, logos and mascots are offensive and “inextricably tied to this nation’s history of racism” and that their behavior is “self-serving.”

ASU Now recently spoke to Riding In on this controversial subject. Question: Many people who follow sports, especially teams with indigenous names and mascots, say the names are meant to be respectful and to pay homage to Native American people, and their mascots focus on bravery and courage rather than anything derogatory. What would you like to say to them?

Answer: I flatly reject the contention of team owners and sports fans that American Indian-oriented team names, logos and mascots in professional and amateur sports pay homage to Indian bravery and courage. Their so-called honoring celebrations of Indian heroism are not only misguided, harmful and offensive to Indians but are also inextricably tied to this nation’s history of racism. Because their behavior falls within a historical pattern of white American privilege that includes devising images of others for self-servicing purposes, they are participating in a disingenuous culture of honor. Indians, victims of this unwanted attention, should be the ones to determine what constitutes honor and respect in instances such as these.

Since the early 1960s, indigenous individuals, including Suzan Shown Harjo and Amanda Blackhorse, have acted with undaunted bravery and courage in their challenges to the phenomena of offensive sports pageantry. The National Congress of American Indians, joined by the National Indian Education Association and many other groups, has been at the forefront of this human rights movement. Research supports contentions that the mascots and names have harmful psychological effects on Indian high school and college students. These studies also indicate that Indian-themed names, logos and mascots reinforce negative views held by non-Indians toward Indians. Fortunately, these findings have encouraged many churches and professional organizations such as the American Psychology Association to adopt resolutions calling for the retirement of the negative imagery in sports.

These efforts and resolutions have encouraged hundreds of schools, colleges and universities across the nation to do away with offensive team mascots, logos and names. Yet holdouts, mostly at the professional sports level, have refused to change behaviors that promote harassment and prejudice toward Indians. Indian voices of defiance calling for common-sense solutions are often met with threats, ridicule and mockery.

Q: In the specific case of the Washington, whose team owner Dan Snyder refuses to budge on the name and logo, fans and members of the public say the mascot does not look foolish, weak or clownish — and it reminds them of our country’s heritage and that indigenous people are resilient and strong.

A: Despite facing criticism from Indians since the 1960s, the Washington team steadfastly refuses to change its name. That team’s fans all too often act in foolish and clownish ways that make a mockery out of Indian cultures. At other stadiums, fans often make outlandish “Indian” war hoops and do “tomahawk chops” while humming a Hollywood tune. Zealous fans from competing teams express their team loyalty by using such disparaging phrases as “scalp the Indians.”

Historically, white America has not viewed indigenous peoples as being resilient and strong. Euro-American colonizers and their descendants sought to rationalize and justify the fulfillment of their “Manifest Destiny” by creating and articulating dehumanizing stereotypes and myths that branded Indians as inferior, fierce savages who lusted uncontrollably for the blood of innocent white women and children.

White Americans concocted and used (racial slurs) in public and private discourses to denigrate and justify the mistreatment of Indians. For instance, Thomas Jefferson’s use of the words “merciless Indian savages” in the Declaration of Independence illustrates the pervasiveness of this disparaging term. This language of Indian inferiority and white superiority gave rise to a history of United States laws and policies designed to “kill the savage but save the man.” Serial acts of violence and coercive assimilation left unoffending Indian nations and peoples in a state of abject poverty, poor health and political subjugation for more than half a century. The theme of civilization's triumph over savagery remains a prevalent theme in U.S. history.

Q: The Washington Post conducted a 2016 survey of Native Americans and found that 9 out of 10 did not find the nickname offensive, insinuating that this is a case of fake outrage spurred by the media. If Native Americans don’t find it offensive, then why should the rest of the public?

A: Two methodologically flawed telephone surveys, the 2004 Annenberg survey and the 2016 Washington Post survey, purport that the vast majority of Indian respondents do not find the Washington’s team name to be offensive or are not bothered by the moniker. These surveys erred by relying on a single question to people who identified themselves as American Indians or Native Americans. They also asked a single question without regard for the best social science methodologies of considering nuances of opinion.

While a few schools in Indian country have Indian-themed team names and a minority of Indians do not find those team names to be offensive, it is a stretch to say that the two surveys accurately captured the full extent of Indian opposition to the Washington team name. A 2018 study found that four out of five Indians who participated in focus group discussions expressed their opposition to mascots. It should be also noted that a 1963 study of the students at Haskell Institute, now Haskell Indian Nations University, found that almost all of them resented being called (the term).

Q: Part of the reluctance of changing a name has to do with team history and branding. Some have said that when the NBA’s Washington Bullets changed their name in the 1990s, it harmed their franchise in terms of money, branding and loyalty. How do you get an owner to overcome those fears?

A: It is questionable if changing the name of the Washington Bullets to the Wizards actually resulted in the loss of money, branding and loyalty for the team. In 1997, team owner Abe Pollin took the moral high road when he changed the team’s name because he saw an epidemic of violence linked to guns and bullets in Washington and elsewhere. The 1995 assassination of Israeli Prime Minister Yitzhak Rabin, Pollin’s close friend, also influenced his decision.

The decline of the team’s quality of play mostly likely led to the team’s declining attendance and financial problems. Putting winning teams on the court and fields is the best solution for economic success in sports.

Q: In the case of the Washington football team, the Supreme Court ruled that a trademark law barring disparaging terms infringes on free speech rights. So if a team or owner doesn’t want to voluntarily change the name, what other methods can be used to get them to change the name?

A: The facts in Matal v. Tam differ from those in Pro-Football Inc. v. Blackhorse. In Tam, an Asian-American rock band filed suit against the decision that the Trademark Office had violated its freedom of expression by disallowing the band’s attempt to trademark the name of The Slants. The Trademark Office made its holding on the grounds that the band’s name was disparaging to people of Asian descent. The U.S. Supreme Court, however, held in favor of Tam declaring that the disparagement clause of the Lanham Act violated the band’s freedom of speech and the U.S. Constitution. It must be noted, however, that Tam involves a matter of self-expression while Blackhorse represents a challenge to a non-Indian team’s use of a name disparaging to many Indians.

As a result of Tam holding, the Blackhorse case, which sought to remove federal trademark protection for the offensive team name, has been dropped. Yet, many Indians still see the name of the Washington team as racist and offensive. They will undoubtedly continue their protests in hopes of swaying public opinion to pressure the team to change its name.

Q: The Cleveland Indians baseball team recently announced that they will no longer display the controversial Chief Wahoo logo as part of their 2019 uniform, but are keeping the name. In this case, is this a victory?

A: American Indians and others have been protesting the Cleveland baseball team since the 1970s because its Chief Wahoo logo is seen as an offensive caricature and because the team’s name encourages fans to make a mockery out of Indian culture. The team’s recent decision to no longer display its controversial logo on team uniforms and stadium signs is only a partial victory. The team has retained its license to sell merchandise with the Chief Wahoo logo. Most likely, the offensive behavior of fans will continue unabated. Such is the nature of sports fan behavior in America.

Q: What’s the future look like for this issue?

A: As noted, the movement against offensive and disparaging names, symbols and mascots in sports has made substantial progress. It has encouraged many schools, colleges and universities to change their names and drop offensive mascots. Numerous leading Indian and non-Indian organizations have spoken out against this problem in sobering terms, showing that offensive sports pageantry not only has harmful consequences on the self-esteem of Indians but also intensifies prejudicial attitudes towards Indians. Thus, it is very likely that the struggle may continue for years to come.

Top photo: Florida State University Seminoles mascots Osceola and Renegade, who represent the historical leader Osceola and his Appaloosa horse. The two introduce home football games by riding to midfield with a burning spear and planting it into the turf. The Seminole Tribe of Florida has approved this portrayal of Osceola by FSU. Courtesy of Wikipedia