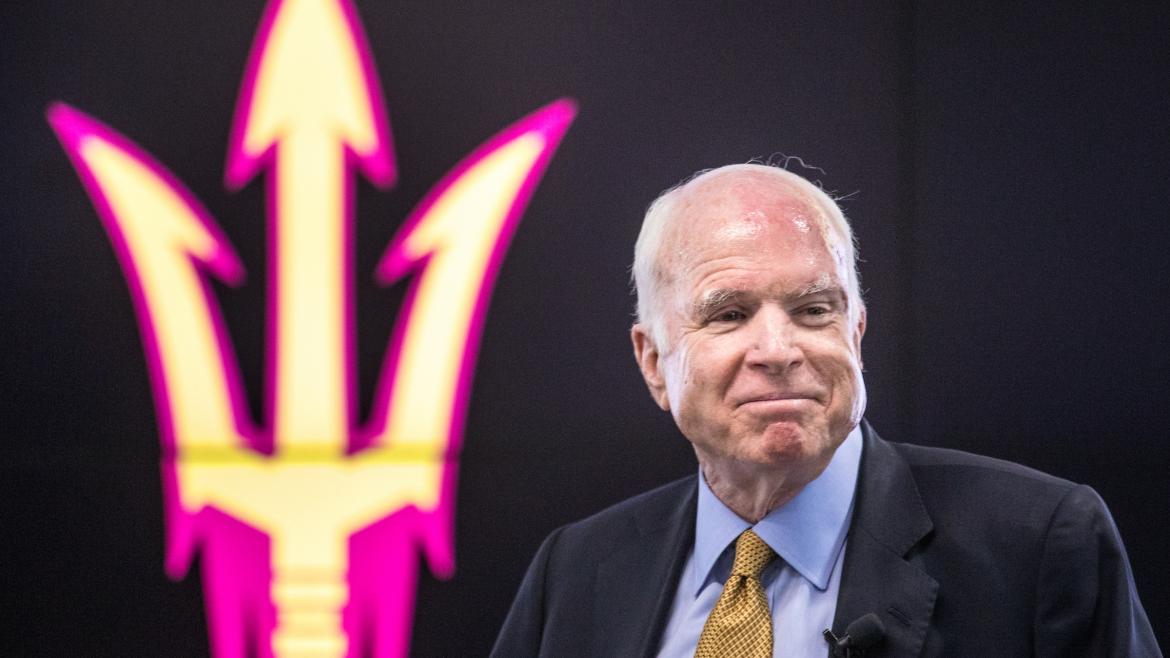 McCain’s legacy at ASU one of philanthropy and service

From namesake McCain Institute to cybersecurity and sustainability projects, senator was connected throughout university

McCain died Saturday after a yearlong battle with brain cancer. The war hero, who was a Republican, was 81 years old.

“The entire Arizona State University community joins the nation in mourning the loss of Sen. John McCain,” said ASU President Michael M. Crow. “Sen. McCain had an extraordinary impact on this university, the state of Arizona, our nation and the world. He represented the best of America, and his passing leaves a void that will not easily be filled.

“It’s been said many times before, but bears repeating now: Sen. McCain is a true America hero. He dedicated his life to serving this great nation, never wavering in his belief in the inherent strength and goodness of America and its promise. He believed that our greatest assets could be found in the most unlikely places, and that the values that unite us as Americans are far greater than that which divides us.”

The U.S. senator met with students last summer as part of the Rio Salado 2.0 project, an initiative to transform the riverbed that runs through the Valley. He told the students he supported the project because he was starting to think about his legacy.

“We want to make this an example to the rest of the state, as well as the nation,” he said at the August 2017 event. “I’ll tell you whose plan it is, and who is going to make it work, and that’s ASU.”

McCain’s most visible connection to ASU is the namesake McCain Institute for International Leadership, a nonprofit and nonpartisan education and research center based in Washington, D.C. The center was launched in 2012 with a $9 million gift from the McCain Institute Foundation, a charitable trust founded by McCain, and provides internship opportunities for undergraduate and graduate students. In 2017 it hosted 20 events on human trafficking, international security, and leadership, and partnered with 31 organizations in the U.S. and around the world.

“My heart is so deeply heavy given the passing of Sen. John McCain, who I am ever proud to have had as a dedicated mentor,” said Ambassador Kurt Volker, executive director of the McCain Institute. “He was a giant, the likes of which few our country have seen. His character, values and example impacted the world over, with much of his immense positive influence on leaders, emerged and emerging, still to come. Our prayers and condolences are with his incredible family, which sustained him, and endures.”

McCain visited ASU’s campuses several times in recent years to share his expertise on international and domestic politics, sometimes in blunt terms. In August 2017, he was at the Polytechnic campus to speak at the first ASU Congressional Conference on Cybersecurity, where he warned that the White House needs a plan to combat hacking: “I can assure you our enemies are not junior varsity. … If they’re able to change the results of a presidential election, then they’re able to change democracy.”

In February 2016, McCain sat for a public interview with Jeffrey Cunningham, host of the “Iconic Voices” video series, at the Walter Cronkite School of Journalism and Mass Communications at the downtown Phoenix campus. 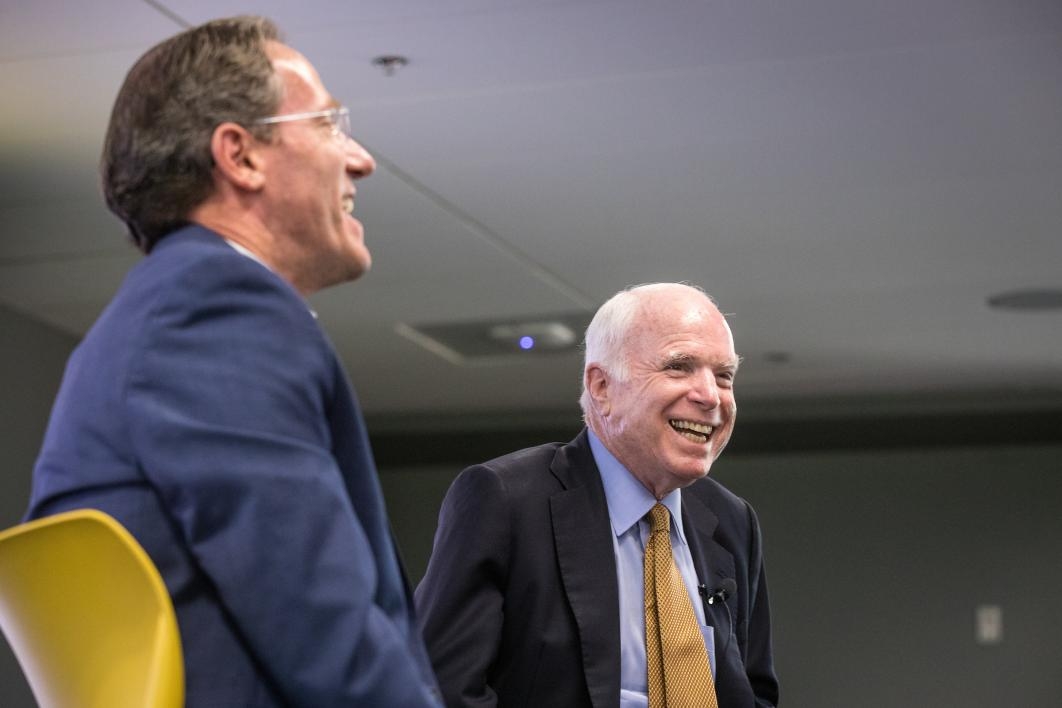 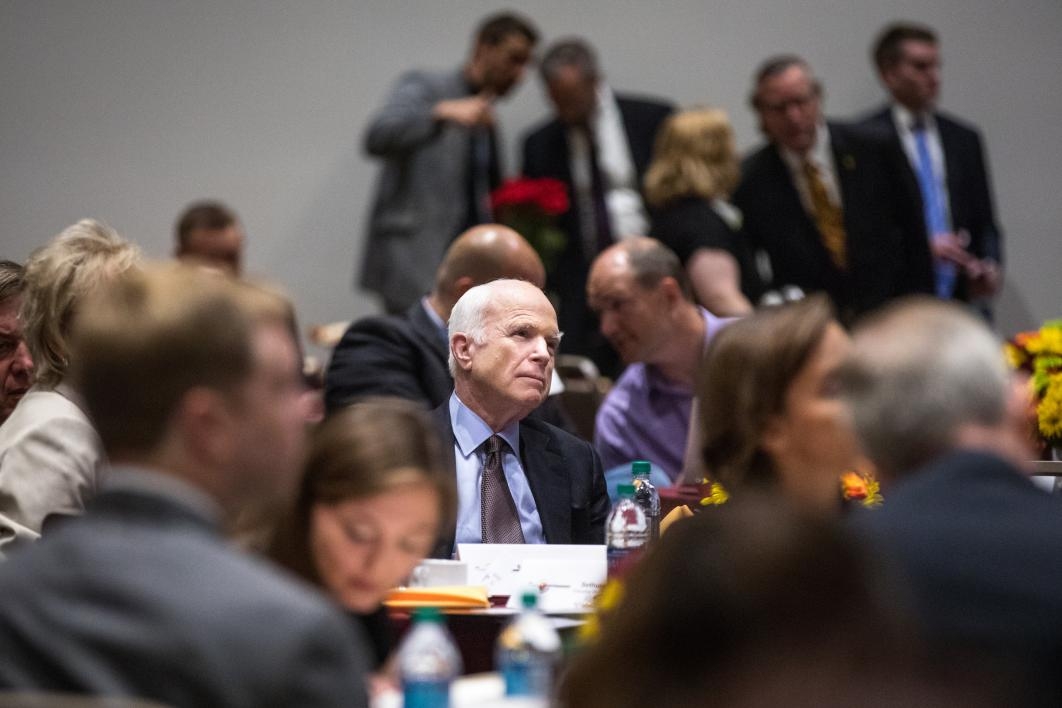 Sen. John McCain, chairman of the U.S. Senate Committee on Armed Services, listens to the speakers at the first ASU Congressional Cybersecurity Conference on the Polytechnic campus on Aug. 23, 2017. The day-and-a-half long conference featured talks by leading university and industry experts and panel discussions moderated by past and present members of Arizona's congressional delegation. 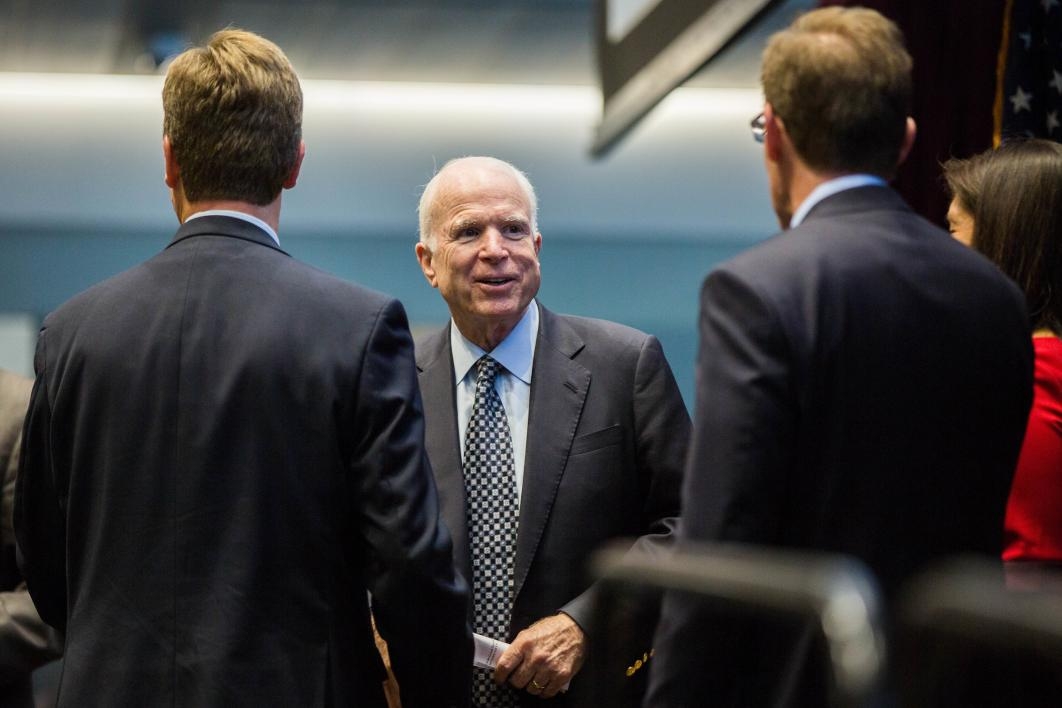 Sen. John McCain is greeted onstage before the start of the grand opening of the Beus Center for Law and Society, the new home of the Sandra Day O'Connor College of Law on ASU's Downtown Phoenix campus Aug. 15, 2016. 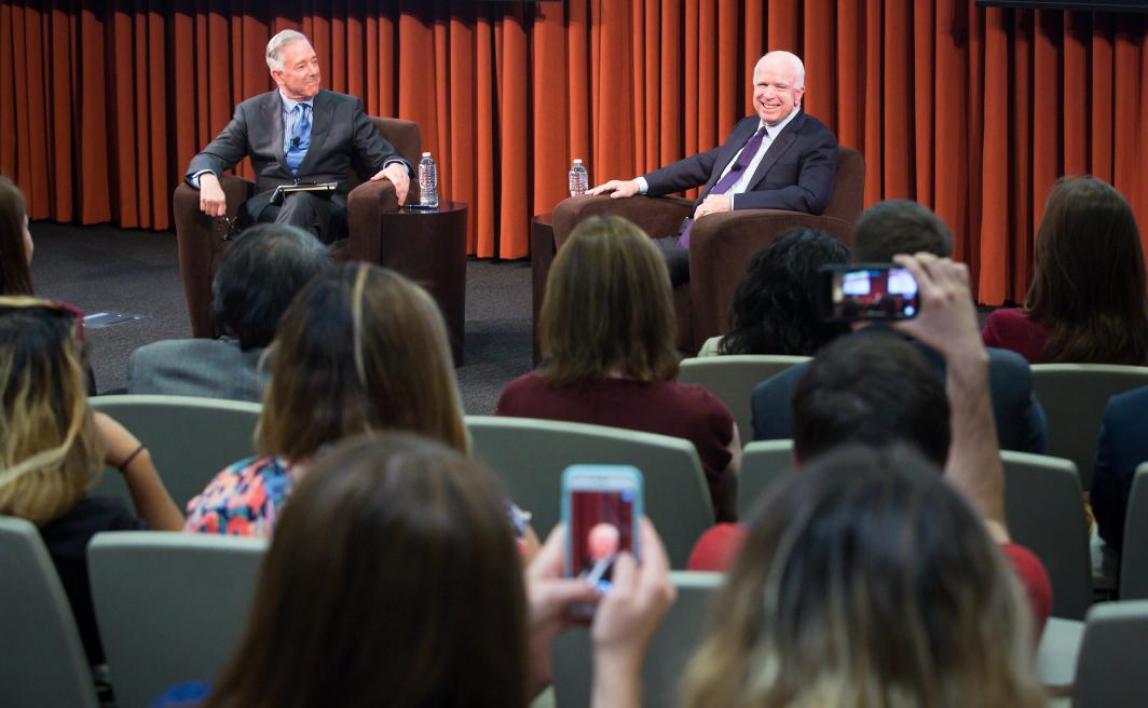 Students take photos as Jeff Cunningham interviews Sen. John McCain as part of his "Iconic Voices" series at the Cronkite School of Journalism and Mass Communication on Feb. 19, 2016. McCain touched on a variety of topics ranging from the presidential candidates to student debt to North Korea. Cunningham, a professor of practice at ASU, is the former publisher of Forbes magazine. 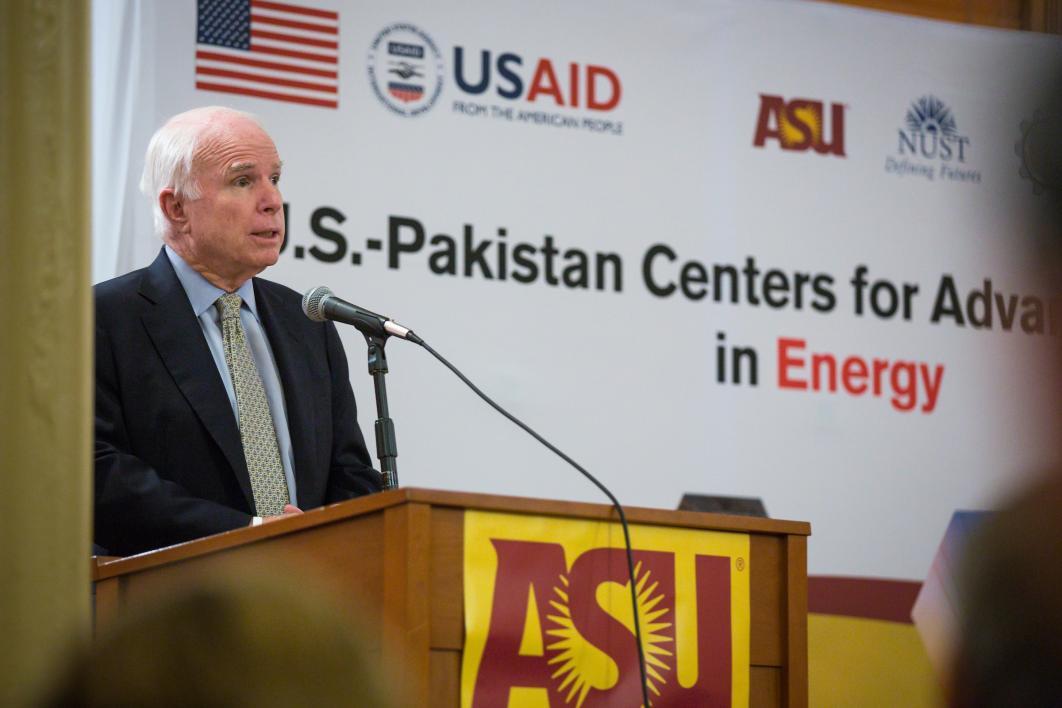 Sen. John McCain offers his insight as ASU announces its partnership with two leading Pakistani universities to find energy solutions for Pakistan, on Aug. 27, 2015, in Old Main on the Tempe campus. McCain participated in the announcement of the program, which was made possible through an $18 million grant awarded by USAID, its largest grant given to ASU. 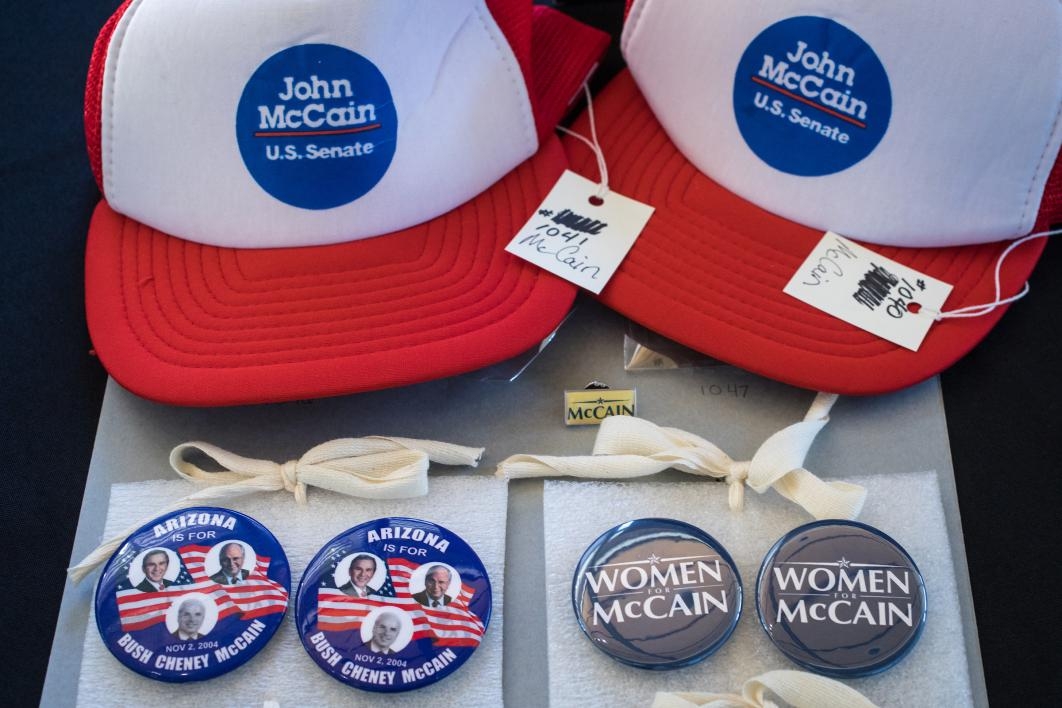 Examples of Sen. John McCain's political archives are displayed at ASU's Polytechnic campus June 22. The university's library will eventually be the permanent home to more than 1,000 boxes of schedules, notes, letters, files, pictures and campaign memorabilia from before his first U.S. House campaign in 1982 through senatorial campaigns and his two runs for the presidency in 2000 and 2008. 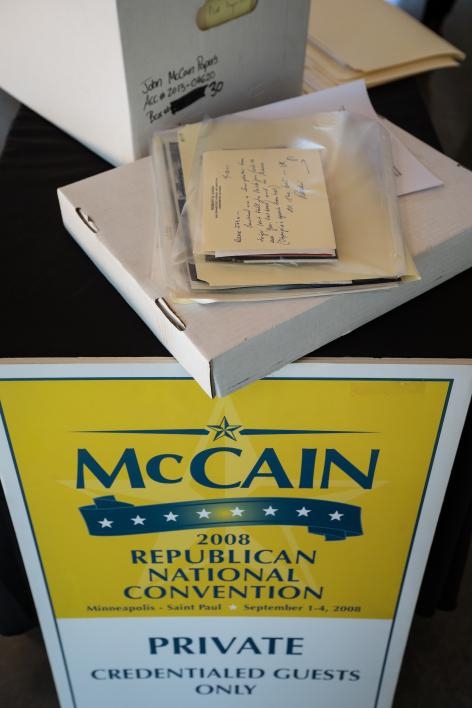 A sign from McCain's 2008 presidential campaign is part of the McCain Collection, housed in ASU's archives. 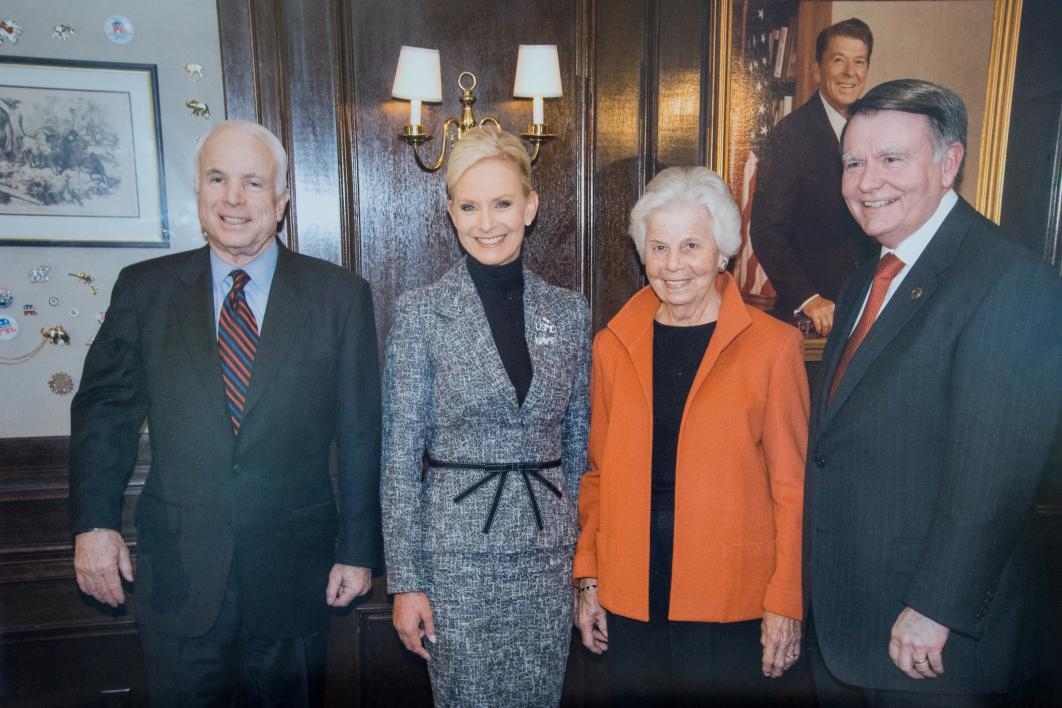 A 2008 photo of (from left) Sen. John McCain, Cindy McCain, Jo Ann Davidson (co-chair of the Republican National Committee) and Mike Duncan (chair of the RNC) is part of McCain Collection.

In the conversation, he lamented the high rate of student debt among millennials and worried about terrorist attacks on American soil. Yet he remained optimistic: “My friends, America is the greatest and strongest nation on Earth. Have no doubt about it.”

In October 2016, McCain visited the Arizona PBS studio in the Walter Cronkite School of Journalism and Mass Communication at the downtown Phoenix campus to debate his Democratic opponent, Ann Kirkpatrick. The following month, he defeated Kirkpatrick to secure his sixth term in the U.S. Senate.

ASU is also home to the McCain Collection. In 2012, the senator donated his papers to the university. In the next few months, 800 boxes of materials including records, photographs and correspondence dating back to 1983 will be shipped from his offices in Washington, D.C., to ASU Library, where they will be accessible to scholars, historians and the public.

“Throughout his life Sen. McCain demonstrated an irrepressible spirit that would lead him to take on some of the greatest challenges of our time,” Crow said. “He inspired the nation with his character-driven leadership and steadfast commitment to promoting freedom, democracy, national security and human rights.

“We will remember Sen. McCain as a fighter. Never one to back down from a challenge, he saw opportunity where others saw obstacles. Whether working with colleagues across the political spectrum, taking difficult positions on important issues, or showing up when it counted most, Sen. McCain understood that real leadership takes courage. And more, even in defeat, which he faced after the 2008 presidential election, he showed the nation graciousness and provided us all a compelling, unifying example.”

McCain is survived by his wife, Cindy McCain, who sits on the McCain Institute’s Human Trafficking Advisory Council. The council worked with ASU students in 2014 to launch a chapter of All Walks Project, a student-led nonprofit organization focused on raising awareness of domestic sex trafficking.

“John McCain was an exemplary leader — through his heroism in Vietnam, his tireless work on behalf of the people of Arizona in the U.S. Congress, and with his commitment to be a steadfast voice on behalf of human rights, the next generation of international leaders, and victims of human trafficking around the world,” she said.

“He was a leader for the ASU community as well, inviting us to partner with him in the creation of the McCain Institute for International Leadership. We will continue to empower the institute to be as influential and positive a force as its namesake.”

An unprecedented production of Leonard Bernstein’s “Mass.” An exhibition featuring ASU Art Museum’s Andy Warhol collection. A musical about religion, identity and dinosaurs. The 2018-19 season at Arizona State University’s Herberger Institute for Design and the Arts is packed full of design and arts events, including concerts, dance and theater productions, film screenings, interdiscipli... 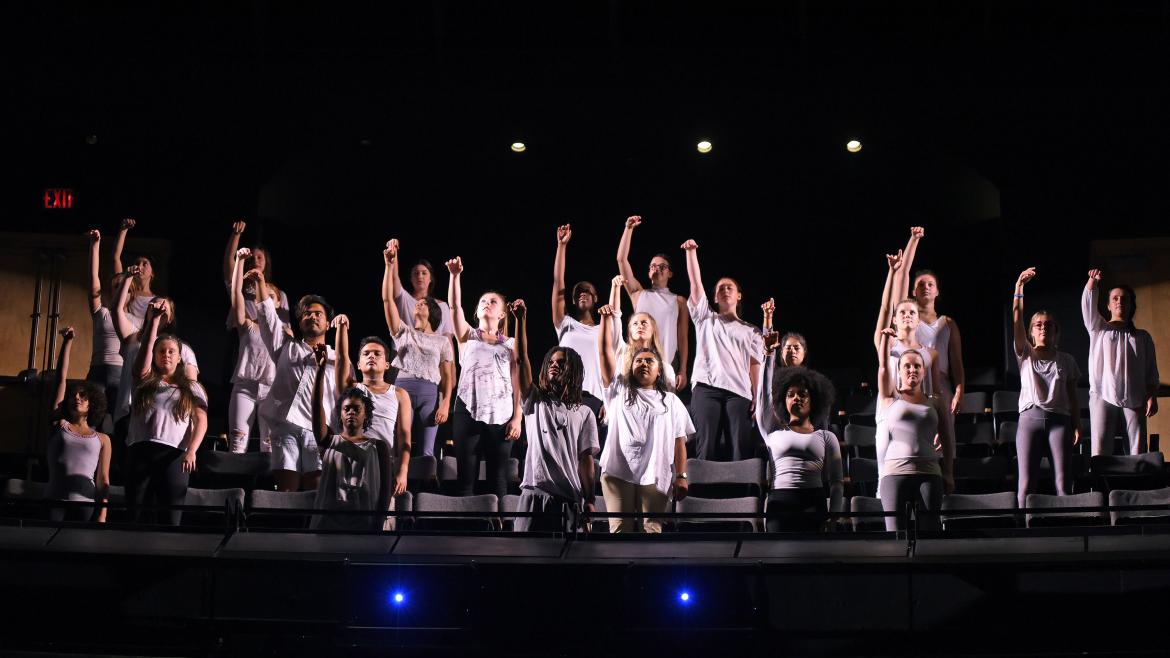 An unprecedented production of Leonard Bernstein’s “Mass.” An exhibition featuring ASU Art Museum’s Andy Warhol collection. A musical about religion, identity and dinosaurs. The 2018-19 season at Arizona State University’s Herberger Institute for Design and the Arts is packed full of design and arts events, including concerts, dance and theater productions, film screenings, interdisciplinary projects, workshops and panels, as well as digital culture, art and design exhibitions.

Below, two prominent arts leaders in the community — who also happen to be alumnae of the ASU School of Art and the ASU School of Film, Dance and Theatre, respectively — share their top picks from this packed season. 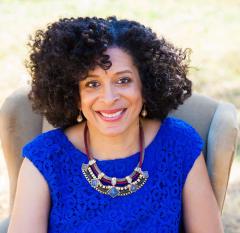 Jeff Chang in Conversation: Art and social practice always turns me on. Add to this race and democracy and I believe this will be the one to be a part of. The south Phoenix light rail issue is a lightning rod for diverse points of views, so it is something not to be missed if you want to hear different perspectives very much affecting all of us here in the Valley.

ASU Chamber Orchestra: Frankenstein!: Scottsdale Arts held an exhibition about the bicentennial for the gothic novel by Mary Wollstonecraft Shelley, and I would love to see how Jeffrey Meyer’s community university orchestra interprets the music as a backdrop for the screening of the 1931 film.

Pop/Funk: Warhol and Frey: My first love is contemporary art, so putting together works by Andy Warhol and Viola Frey, two giants in their respective fields, is a must-see for me. It should be noted that these works will be coming solely from ASU Art Museum’s art collection, which is quite impressive and is a testament to the strength of their collection. 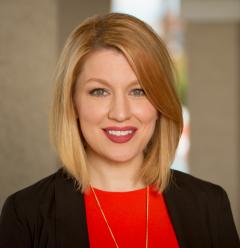 Jeff Chang in Conversation: As an Arizonan who works in the arts, I am grateful to Performance in the Borderlands and Southwest Folklife Alliance for devising a series of events with local residents, centering the voices and lived experience of Arizonans in dialogue with Jeff Chang, such an inspirational thought leader on the many ways arts and culture can influence social movements. It will be fascinating to investigate the ideas born out of this convergence.

Fall Forward!: It is always a joy and inspiration to experience the new approaches ASU’s movement faculty are exploring in collaboration with students and other artists. Some of Arizona’s most engaging, exhilarating dance and live performance practices are sparked here.

This is Modern Art: Such a great choice for the season, given our state’s rich history of street and community art and all of the incredibly talented graffiti artists who make Arizona their home. I’m also elated that ASU selected Ricky Araiza to direct. It’s great to see ASU investing in the careers of its alumni and in creative contributors like Mr. Araiza, such an engaged, multifaceted artist, organization leader, community member and native son of South Phoenix, Arizona.

Visit season.asu.edu for a list of upcoming events, many of which are free, and for information on parking, buying tickets and how to save 25 percent when you purchase by Sept. 15.