Why you should never go to the movies with a physicist

Lasers, phasers and lightsabers, oh my! ASU professors share what the movies get wrong — and sometimes right — about physics

A minute and a half into the 1986 film “Aliens,” viewers find themselves in a dark chamber where Sigourney Weaver’s character has been in a state of hypersleep for 57 years. In floats a boxy, drone-like gizmo that looks like it could have been constructed in a high school prop room.

But bathed in the blue gel of a camera lens and enveloped in the wafting vapors of a fog machine, it begins emitting a half-dozen blue laser beams that methodically scan the contours of the sleeping Weaver and manipulate the equipment in the room. Magically, a simple prop has been transformed in our minds into a highly sophisticated, technological wonder.

Never underestimate the power of a laser beam.

ASU Now talked with professors Maxim Sukharev and Michael Dugger, from the Applied Physics Lab on Arizona State University's Polytechnic campus, about what excites them about physics, their individual career paths in the field and what the movies get wrong — and sometimes right — about lasers.

When it comes to the silver screen, they are ready to admit that you might want to think twice about seeing a sci-fi flick with a physicist.

“Lightsabers? I don’t know what those are supposed to be,” said Dugger in puzzlement, as the two settled into Siskel and Ebert mode. “If that’s a laser, particles of light would never just stop abruptly like that.”

“Of course, if you see somebody on the big screen with a Russian accent doing science, that person will turn out to be a bad character,” Sukharev said with a chuckle. He completed a doctorate in the Department of High-Power Lasers in the General Physics Institute of the Russian Academy of Sciences in Moscow. “But what’s really laughable to me is when a spacecraft is shown speeding through the vacuum of deep space and yet we hear, ‘Zoom, zoom.’

“Most sci-fi movies are not really about the science, though; it's all about the human drama,” he added.

“And if it gets people to think about the science,” said Dugger, “that’s always a good thing.”

Since invented in 1960, the laser (an acronym for "light amplification by stimulated emission of radiation”) has played a leading role in many Hollywood blockbusters: in weapons to battle or vaporize an enemy, in security systems to be outmaneuvered in heists, even in headgear worn by sharks. In the real world, they're used in medicine, in manufacturing and to track products along the supply chain.

“Photons, the fastest things in the universe, are stacked up on each other to create very fine beams,” said Sukharev, an associate professor of physics in the College of Integrative Sciences and Arts. “Laser beams offer a clear, dramatic way to show the different identities and properties of light, and how light can be exploited as a wave and as a particle.”

Sukharev was able to build out the lab between 2010 and 2011, securing funding by answering a call for proposals that offered “crazy money for crazy ideas,” back when the applied science and mathematics programs at the Polytechnic campus was under the umbrella of the now-disestablished College of Technology and Innovation.

Sukharev has since turned the Applied Physics Lab over to Dugger, an experimental physicist and associate professor, who admits that the lab has become his favorite place at ASU to work on his research. A nuclear particle guy, the bulk of his experiments have been associated with the Thomas Jefferson National Accelerator Facility in Newport News, Virginia, where a multi-GeV electron beam is used to produce physics events that further understanding of the structure of the strongly interacting systems of quarks. 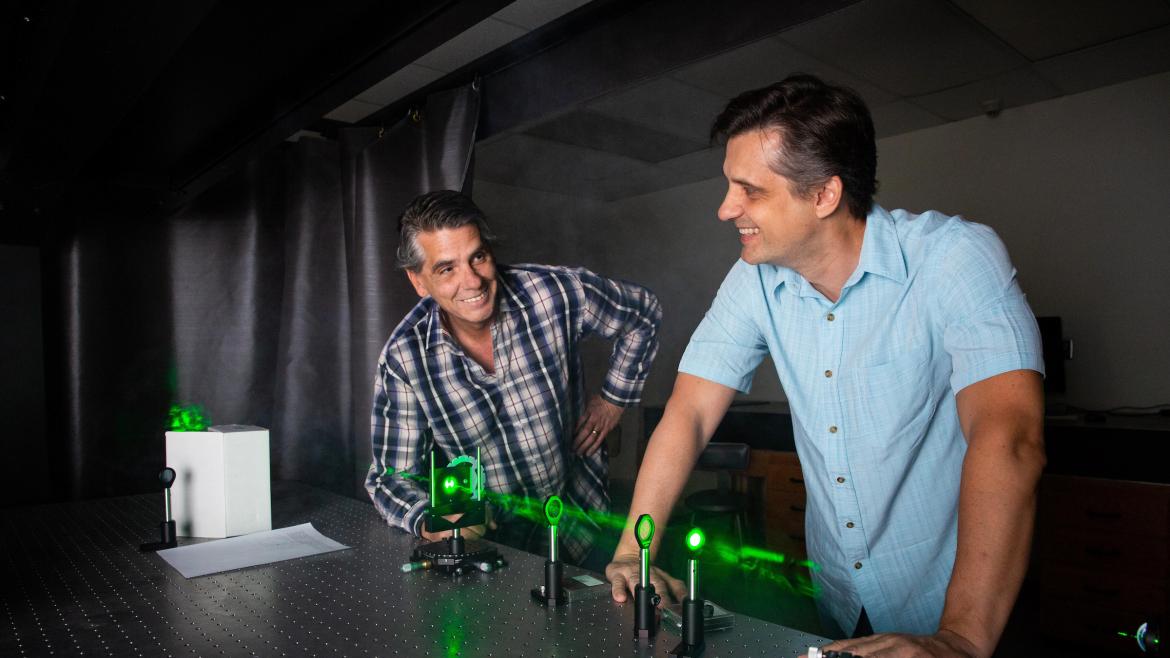 Sukharev and Dugger, who both teach in the new applied physics major offered by the College of Integrative Sciences and Arts’ Faculty of Science and Mathematics, talk excitedly about the lab as a great learning environment for students.

“Here they have hands-on use of the equipment and can see for themselves how the science works and plays out with various teaching tools relevant to advanced physics,” Sukharev said.

With the growth of the applied physics degree program at the Polytechnic campus and the advancement of students in the degree now to upper-division courses, Sukharev this fall is teaching, for the first time, a course in quantum mechanics (PHY 314).

“It’s the course I’ve dreamed of teaching my entire career,” he said gleefully. “Matter sometimes behaves unexpectedly, in ways that are counterintuitive, and the elegance of quantum mechanics in explaining this is incredibly beautiful. The more I teach, the more I learn.”