Students in general biology classes usually don’t get to take blood samples from people, but an online class at Arizona State University not only lets students draw blood, they also can manipulate DNA — all in virtual reality.

Thirty students in the general biology course under way now are using virtual-reality headsets to complete their lab requirement as part of a new partnership among ASU Online, Google and Labster. In total, 140 pairs of headsets will be available for students to borrow for the next round of classes starting in October.

The new technology can be a boon to students in both online and face-to-face classes, according to Amy Pate, manager of instructional design for the School of Life Sciences.

“We always talk about it in terms of the online classroom, but even some of the labs we do on campus have a limited number of seats or it only runs once a year,” she said. “The virtual side of things can get more people into the lab.”

Pate worked with a team from Labster earlier this summer to test out the technology and address any glitches in the different simulations.

“These are custom labs that are truly ASU content, developed by ASU biology professors and assessed to meet our standards,” said Pate, who added that the courses use some Labster content as well.

The new virtual-reality biology lab is among the many innovative ways that ASU incorporates technology. The College of Integrative Sciences and Arts has started using a three-dimensional visualization tool, the Anatomage Table — one of only three in the state — in the anatomy and physiology class at the Downtown Phoenix campus. Last year, engineering students moving into Tooker House received Amazon Echo Dot devices and became part of the first voice-enabled, learning-enhanced residential community on a university campus.

The 30 students in the online Biology 181 course who are borrowing the headsets, made by Lenovo, don't have to pay a rental fee. But students aren't required to borrow the headsets. They can buy their own or access the lab content on their laptops, as the other 370 students in Biology 181 are doing.

After donning the headsets and earbuds, students use a hand-held remote to maneuver 360 degrees in the animated lab, which is on a Google operating system called Daydream VR. The content is accessed through students’ Google accounts. Students click to open a locker and put on a lab coat and gloves before proceeding. The lessons contain scenarios with multiple-choice questions. The lab on cell respiration has students take blood samples from two basketball players and determine their blood glucose levels. Later the view is inside a glucose molecule and students are asked to put the molecules into the proper place to demonstrate the Krebs cycle. 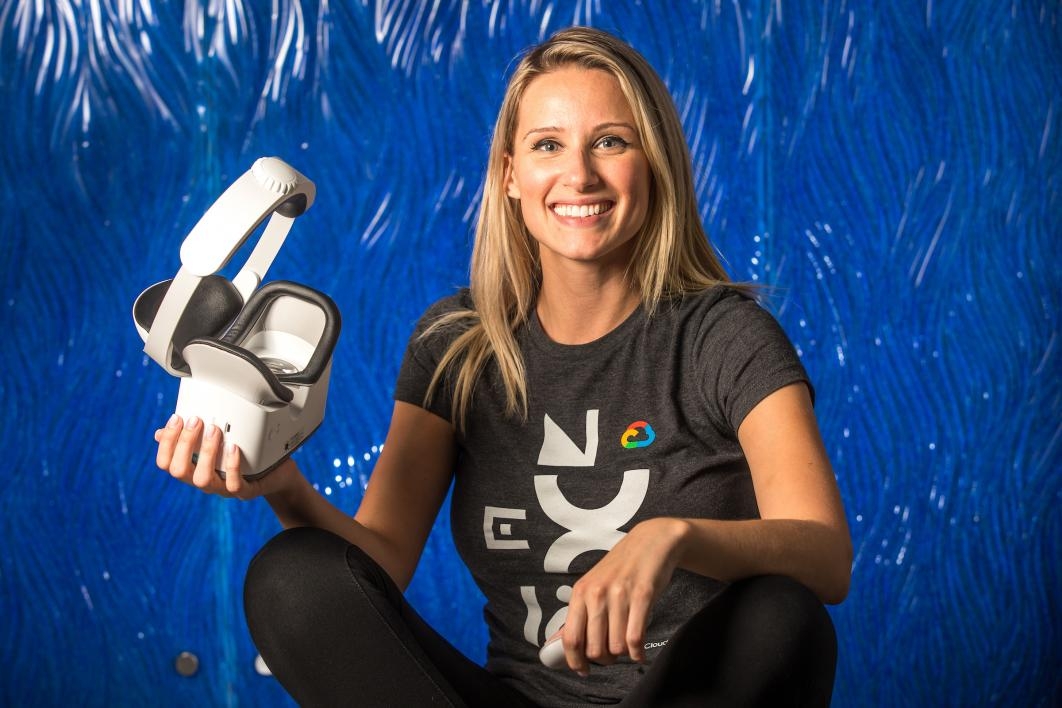 Penny Stone didn't know that her online biology class would include a virtual-reality lab, but she was excited when she found out. She had previously used a VR headset only in a zombie-killing game. 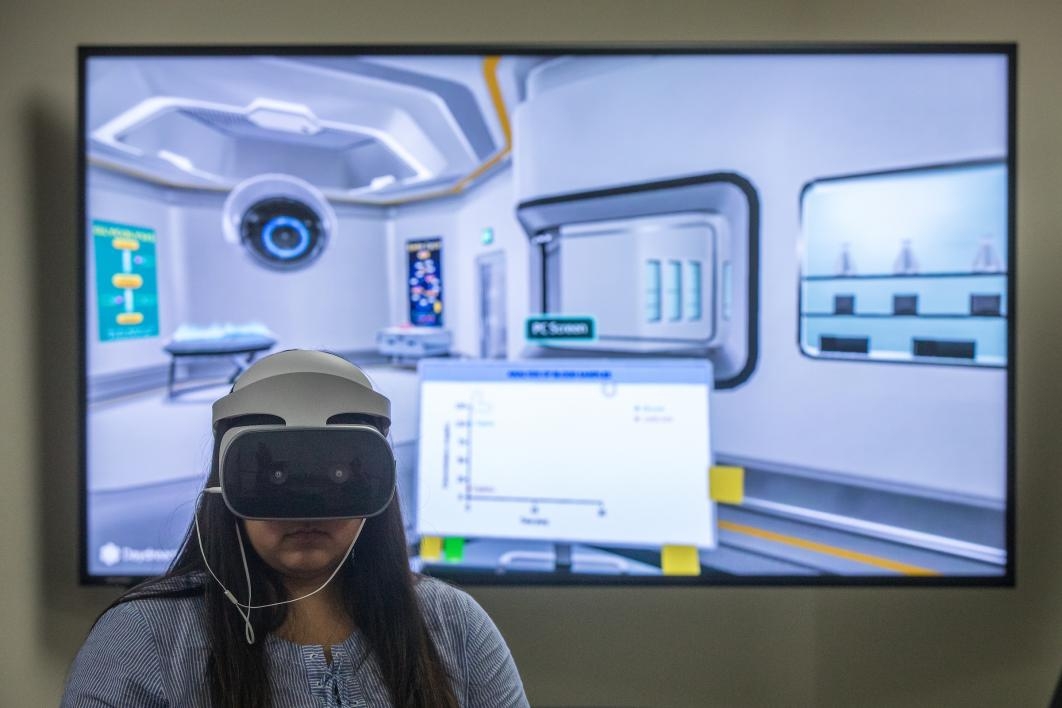 Biological sciences student Victoria Quintana tries out a headset for a virtual-reality biology lab class during a trial run with Labster on the Tempe campus in June. 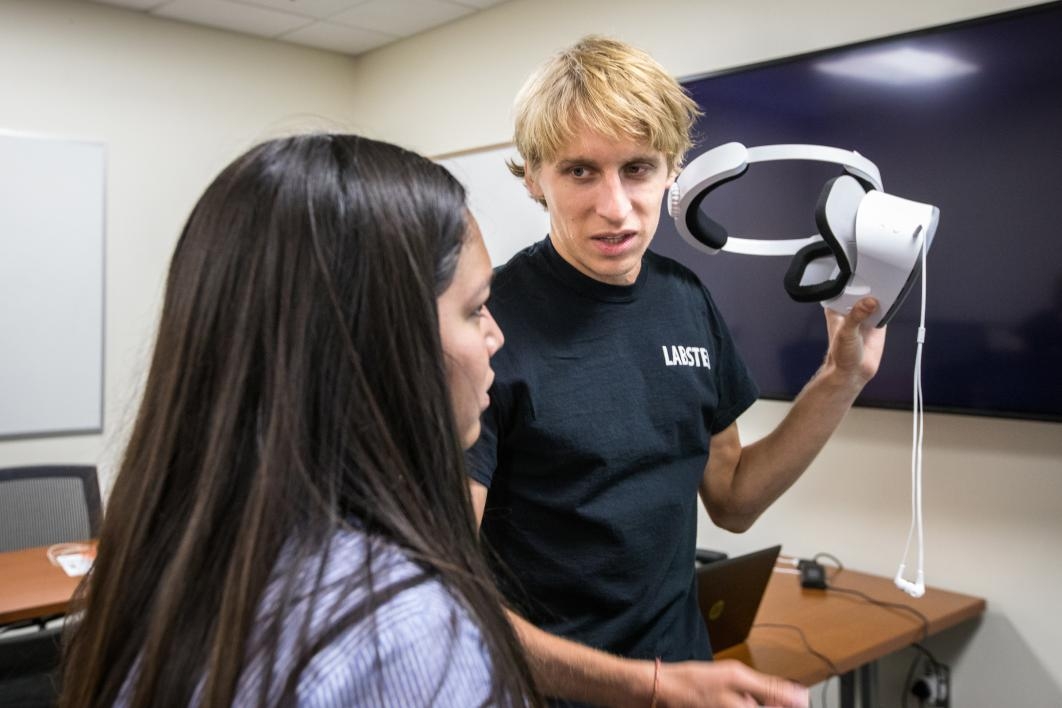 The visualization indicates a student’s progress through the lab and includes encouragements like, “You’ve got this.” Unlike a lab classroom, students can spend as much time in the virtual lab as they need to.

The ASU Online course is the first in the country to offer the virtual-reality biology lab, according to a blog post today by Courtney Hampson, program manager for Google AR & VR. The Massachusetts Institute of Technology and the University of Texas will soon offer the labs, she said.

“Students will also be able to do some things in a virtual lab that wouldn’t be possible in the physical world, like viewing and manipulating DNA at the molecular level,” Hampson wrote in the post.

Penny Stone is taking the course as she earns her biology degree through ASU Online. The Tempe resident, who works as a cybersecurity research consultant, wants to pursue a career in the biotechnology field.

“My dad works in technology too, and he started in ASU Online for biology last semester and I said, ‘Man I should do that too.’"

Stone had used a VR headset before in a zombie-killing game but never for a class. She has done two of the labs so far.

“I did the first lab on my laptop, which takes you through a similar experience. It looks like your hands are in front of you holding a clipboard,” she said.

“But when you’re on the headset, it’s really immersive. I’m really looking around the lab and I don’t have my laptop open with all the other tabs, checking social media. I’m really in it.”

Victoria Quintana was one of the ASU students who tried out the headsets in the testing phase in June.

“Compared to hands-on, it’s not the same, but it’s still more interesting to see it rather than to just read about it in a book,” said Quintana, a senior majoring in biological sciences.

“The visuals were really good, especially when we got to the electronic transfer chain, and I like that it had a sense of humor.”

Top photo: ASU Online student Penny Stone works on a virtual-reality lab while wearing a Lenovo headset. She is one of 30 students in the first virtual-reality biology lab course this semester. Photo by Charlie Leight/ASU Now

The Sports Journalism Institute, a program celebrating 25-plus years of enhancing racial and gender diversity in sports media, will conduct its 2019 boot camp at Arizona State University’s Walter Cronkite School of Journalism and Mass Communication.This institute will host its weeklong residential summer boot camp at the Cronkite School on the ASU Downtown Phoenix campus. The boot camp features ...

The Sports Journalism Institute, a program celebrating 25-plus years of enhancing racial and gender diversity in sports media, will conduct its 2019 boot camp at Arizona State University’s Walter Cronkite School of Journalism and Mass Communication.

This institute will host its weeklong residential summer boot camp at the Cronkite School on the ASU Downtown Phoenix campus. The boot camp features rigorous training sessions in sports reporting and editing by leading professionals. 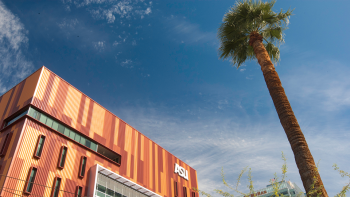 The Sports Journalism Institute is coming to the Cronkite School in 2019 to conduct a weeklong summer boot camp. Download Full Image

Students leave the boot camp with paid internships in digital, electronic or sports media outlets. Students returning to college receive a $500 scholarship upon successful completion of the program.

“We are thrilled to be moving to Arizona State for 2019,” said Leon Carter, who co-founded the institute in 1992 and is currently a vice president at ESPN. “The Cronkite School offers a wealth of resources, including sports venues in close proximity.”

The Cronkite School is home to immersive professional programs in which students regularly cover professional and intercollegiate sports from bureaus in Phoenix and Los Angeles. Since the Cronkite School announced new sports journalism degrees in 2014, students have covered major sporting events including the Super Bowl, the Summer Olympics and the Final Four.

“The Sports Journalism Institute is a terrific program that has played a significant role in improving diversity in press boxes and sports departments across the country,” Cronkite School Dean Christopher Callahan said. “We look forward to welcoming them to our school for this important initiative.”

Most recently, the Sports Journalism Institute has been hosted at the University of Missouri’s School of Journalism.

“Our seven years at Missouri represent the longest we have ever held boot camp in one location, and we hope to continue that partnership wherever we conduct classes,” said Sandy Rosenbush, an Sports Journalism Institute co-founder with Carter. “Missouri has been a great partner for SJI.”

Students of diverse backgrounds are chosen from universities nationwide each winter, then brought together in late May for a week of classroom instruction and deadline-intense coverage preparation. After that, the students work in paid internships facilitated by the institute.

Students can apply for the camp at http://sportsjournalisminstitute.org/apply/.

In addition to Carter and Rosenbush, the boot camp is run by Greg Lee, a graduate of the institute's second class who has served as president of the National Association of Black Journalists and currently works as director of editorial at NBA.com for Turner.

Disney and ESPN also are strong partners, with ESPN the 2017 title sponsor of the Sports Journalism Institute's 25th class celebration at the National Association of Black Journalists convention in New Orleans.