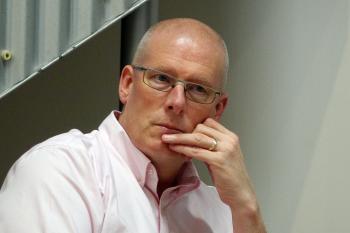 Three years ago, all 193 member countries of the United Nations agreed to adopt a set of goals to achieve an economic, social and environmental vision for peace, prosperity, people and the planet by 2030.The Global Sustainable Development Goals may have been agreed upon by nations, but it's cities, including Los Angeles, that are beginning to work on them.Arizona State University is playing a role... Three years ago, all 193 member countries of the United Nations agreed to adopt a set of goals to achieve an economic, social and environmental vision for peace, prosperity, people and the planet by 2030.

The Global Sustainable Development Goals may have been agreed upon by nations, but it's cities, including Los Angeles, that are beginning to work on them.

Work was carried out this summer at the ASU California Center in Santa Monica by students from the Thunderbird School of Global Management and three other universities. Thunderbird Director-General and Dean Sanjeev Khagram, who is also a senior adviser to Los Angeles Mayor Eric Garcetti, supervised the project.

Khagram, a Foundation Professor of Global Leadership at ASU, is a world-renowned expert in global leadership, the international political economy, sustainable development and the data revolution. He says the environment and sustainability increasingly are important to business and that businesses should think of themselves as corporate citizens.

Businesses can reap a number of benefits if they think about sustainable development and issues. Cost savings from reducing their energy footprint will save money and boost the bottom line.

New markets can be opened up, Khagram said. 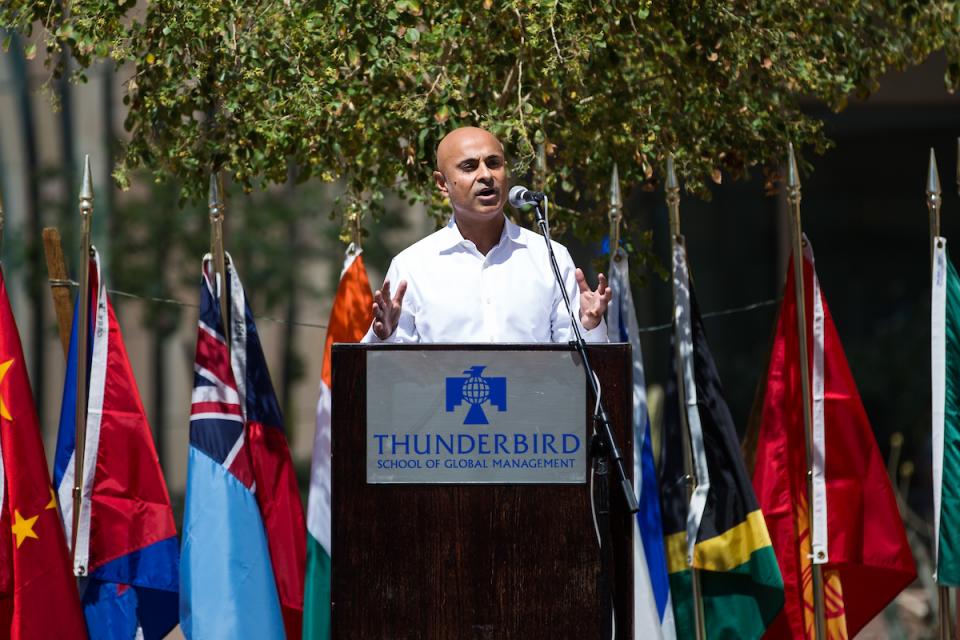 Incoming Director-General and Dean Sanjeev Khagram delivers a presentation on Thunderbird’s future to alumni and faculty members at the ASU downtown campus on April 8. Photo by Summer Sorg/ASU Now

“British Petroleum is the archetypal example,” he said. “They decided in the 1980s and 1990s that they had gone from British Petroleum to beyond petroleum; they weren’t just an oil and gas company — they were an energy company, and they were in the market for solar and wind and all kinds of things. That opened up possibililties for sustainable business.”

“A lot of investors, both institutional and individual, care deeply about the future of society and the natural environment and the planet,” Khagram said. “Increasingly companies have to produce what are called triple-bottom-line reports, where they report not only what their financials are, but what their impact on society and the environment has been. Investors look at those and they make judgements. I’d rather invest in a good company that’s doing well in all these areas than a company that’s not doing as much.’”

That means new sources of financing companies can access. There’s a risk-management side as well — debt financing from banks, for example.

“Banks are always worried about managing their risks,” Khagram said. “If they’re looking at a company whose entire business model is based on a nonrenewable resource, then there’s a huge risk there because there's a term limit to how long their business is going to be. They’re looking at ‘Are they making decisions that are going to make them less risky to investment?’ For business, it’s very material that they think about sustainability.”

Madit Yel, who is earning a Master of Arts degree in global affairs and management at Thunderbird, worked on the Los Angeles project over the summer. He worked with a team tasked with assessing the role of private stakeholders in implementing the goals in Los Angeles. The work involved mapping, aligning and identifying gaps and opportunities within the private sector that could push the goals forward.

“Working with the city of Los Angeles in implementing the U.N. Sustainable Development Goals was an opportunity for me to gain hands-on experience in development planning,” Yel said. “I'm interested in international development and wanted to experience what it looks like to implement global goals on a local city-level context. LA's adoption of the (goals) is important because it not only helps the city align its development plans with the goals, but allows it to work with other cities as an example of how the (goals) can be achieved at a local city level. Many cities are adopting the (goals), including New York City.”

"Because cities are unique and individual components of the state, localizing (them) is compulsory," Molina said. "Los Angeles is at the forefront of many movements, and I believe it can become a model for a sustainable city."