According to Guide Dogs of America, a 16- to 18-month-old puppy will go through four to six months of training before it can become a guide dog. And that doesn’t consider the financial costs of training.

A team of students and faculty from the Ira A. Fulton Schools of Engineering at Arizona State University, along with visiting scholars, have developed a high-tech alternative. Their technologically savvy guide dog recently won a first-prize award at the 2018 Intel Cup Undergraduate Electronic Design Contest. More commonly known as the Intel Cup, two ASU students traveled to Shanghai, China, in July for the competition. 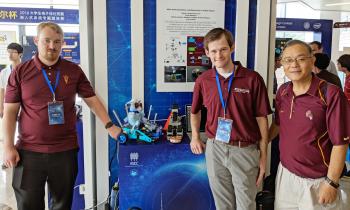 “The main motivations for this problem are how long it currently takes to train guide dogs for use and the cost of doing so,” computer science senior Stephen Lockhart said. “Along with this are the dog’s physical limitations such as color blindness.”

The team has developed a robotic guide dog for a motorized wheelchair for use by individuals who are visually impaired. Both prototypes are currently too small in physical scale to be used by people, but the project allows this concept to be easily demonstrated and tested for the future.

Many different systems were integrated for the guide dog to function properly. The guide dog uses many of the same communication protocols found in a smartphone, like Wi-Fi and Bluetooth.

“In addition to these protocols, we had to develop an algorithm in order to get the systems to behave in the way we wanted them to,” said Richard Simpson, a computer systems engineering and engineering (robotics) major. “For example, when the dog sees a cone we needed to make certain that it would decide to move around the cone rather than plowing into it.”

“I believe using Alexa mostly came out of the necessity of needing an easy method of control that would work for a person who is blind,” Lockhart said. “We also demonstrated without the voice control since purely relying on voice commands in a noisy urban environment might prove more difficult than a set of buttons to press for commands.”

For the guide dog to “see” its surroundings, a GoPro camera was strapped to its head.

“The images it sees are then passed onto the wheelchair’s computer for a combination of AI visual recognition and specific filters for things like a cone or stoplight,” Lockhart said. “This information is then sent to a laptop running our logic system in a program called VIPLE.”

While that information is sent to the computer, a user can speak a command to Alexa, which is received by the laptop and put into VIPLE, short for visual internet of things/robotics programming language environment, along with the visual information from the GoPro. Depending on what is “seen” and the command given, instructions are sent back to the wheelchair and on to the guide dog to process what movement to make. 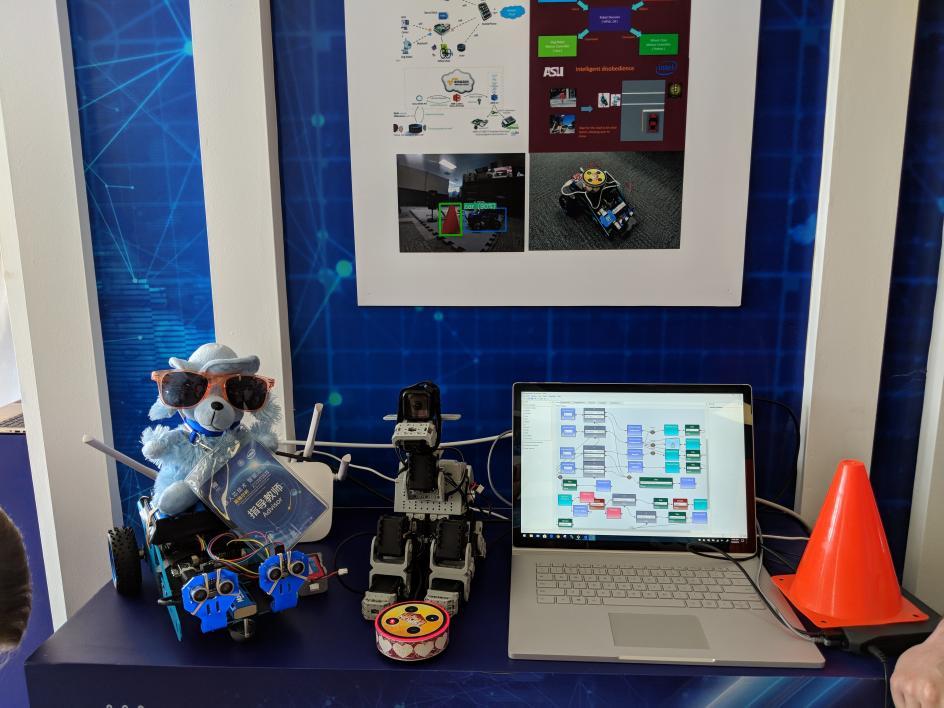 The robotic guide dog and motorized wheelchair are based on the integration of VIPLE, Alexa-based voice control, and machine learning. Photo courtesy of Yinong Chen

ASU VIPLE is a free programming environment for education that has been used by many universities and schools worldwide.

Despite ultimately winning first place, the project was not without its difficulties along the way.

“We faced challenges in having the vision be consistent and not misidentifying a red T-shirt as a red stoplight,” Lockhart said. “Another major challenge area was the motions of the dog. It had great difficulty turning left for a long time, and its movements could change drastically depending on the surface it was on.”

The competition in Shanghai proved to be a good experience for both Lockhart and Simpson, even though a few of the team’s challenges also made the trek to China.

“Richard had to tether his phone to his laptop for internet and then pass it on into the router we had,” Lockhart said. “This workaround allowed Alexa to work in China for us, but was something we only managed to do after the first day at the competition.”

Leading up to the event, team mentors Yinong Chen, a computer science and engineering senior lecturer, and Jinhui Zhu, a visiting scholar at ASU’s School of Computing, Informatics, and Decision Systems Engineering, were very optimistic about the project’s performance in the competition.

“I did not share Dr. Chen’s confidence entirely,” Simpson said. “I trusted that he had a good understanding of where we were with the project and possibly how far other teams were in the same situation.”

“I honestly didn’t quite know what to expect for the competition and was mostly more concerned with getting things working properly before worrying about our place in the competition,” Lockhart said. “I don’t think I really gave it much thought until Shanghai, but Professor Chen’s confidence rubbed off on most of us, so we were aiming to at the very least match previous ASU teams in terms of standing.”

Lockhart and Simpson may have been the only two team members to travel to China, but the team’s five other student members and multiple team mentors were rooting for them from home. Computer systems engineering majors Matthew Koltes and Tyler Pavkov, computer science majors Aubree Dagilis and Yichenglong Zhong, and Denis Liu, a high school junior from Corona Del Sol High School in Tempe, Arizona, rounded out the team.

The guide dog project is a part of Chen’s ongoing and future-oriented computer science education projects.

“These projects are based on the integration of VIPLE, Alexa-based voice control, and machine learning,” Chen said. “The guide dog and wheelchair in this Intel Cup project extend the types of the devices that VIPLE can control, and thus offer more platforms for teaching and research.”

The Intel Cup is held every two years, and ASU has now won a first-prize honor in three consecutive competitions: 2014, 2016 and 2018. ASU students won a second-place prize in 2012. The competition is jointly hosted by the Higher Education Department of the Ministry of Education and the Personnel Education Department of the Ministry of Industry and Information Technology; organized by the Shanghai Municipal Education Commission and Shanghai Jiaotong University; and co-organized by Intel.

This school year, nearly 10,000 Arizona State University students heading to campus will receive scholarships funded by private support. Scholarships, while not a replacement for public funding, offer students the opportunity to go above and beyond in their pursuits. Many recipients are using these awards to pursue careers in fields they may not have had access to without private funding.  Meet ... 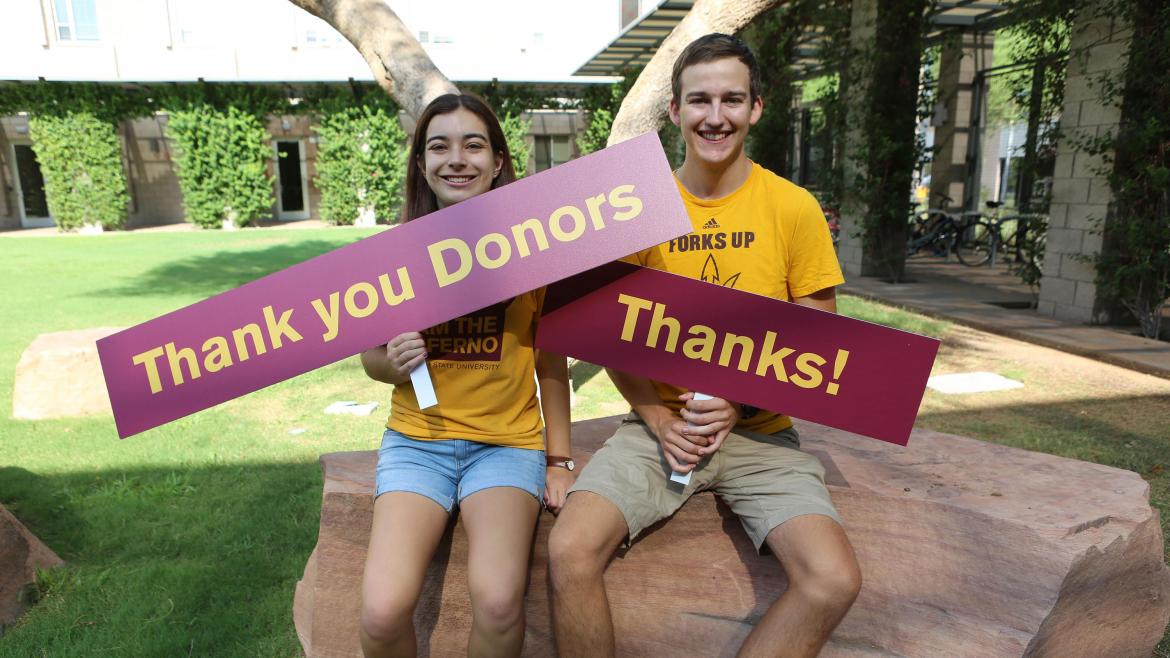 Scholarships, while not a replacement for public funding, offer students the opportunity to go above and beyond in their pursuits. Many recipients are using these awards to pursue careers in fields they may not have had access to without private funding.

Meet some of the scholars making moves to shape their futures.

Scholarship: Green is a recipient of the Mark Bowland Leadership Fund. This award recognizes the contributions of young adult leaders who identify as LGBT and the indelible impact that their efforts have on the present and future. 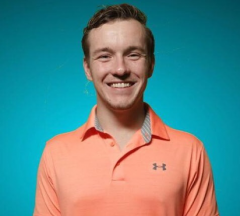 His goals: “Upon graduation, my goal is to become a lead buyer in Arizona or return to the agency world and become a talent agent,” Green said. “I plan on taking this upcoming semester to gain even more experience as a buyer and figure out which route I ultimately want to take. This award will help me to remain debt-free throughout college, and I am extremely grateful for that.” His story: Siraj is a pre-health junior in the College of Liberal Arts and Sciences, majoring in biological sciences. Through his scholarship, he had the opportunity to volunteer at Dignity Health, which taught him about patience and hard work, and also inspired his decision to choose a career path that ultimately serves others.

His goals: “When I graduate, my goal is to further my education through graduate school. I am currently deciding between medical school or other options in the health-care field, such as dentistry or pharmaceuticals,” Siraj said. “I hope to one day own a health clinic to serve underprivileged communities in my home state of Arizona.” 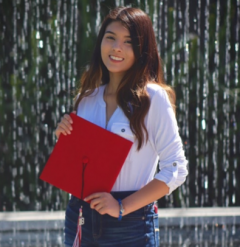 Her story: Cabrera, a first-generation college student, is a freshman attending the Walter Cronkite School of Journalism and Mass Communication, majoring in journalism and mass communication. She chose ASU because she wanted to remain close to her family in Maricopa, Arizona, and study at one of the top journalism schools in the country.

Her goals: “My passions include writing, storytelling, and giving people the opportunity to have a voice,” said Cabrera. “I plan to make the most of my time at ASU, learning as much as I can to continuously improve. For me, becoming a recognized and successful writer and reporter would be a dream come true.”