80 years of gold to white

Freshman year, fresh coat of paint.Whitewashing the “A” is one of the longest-standing traditions at Arizona State University; this year marks the 80th time students have hiked Tempe Butte at the start of the school year to paint the giant letter white, symbolizing a fresh start.Traditions like that are a staple on university campuses nationwide, but there aren’t many that stand the test of... 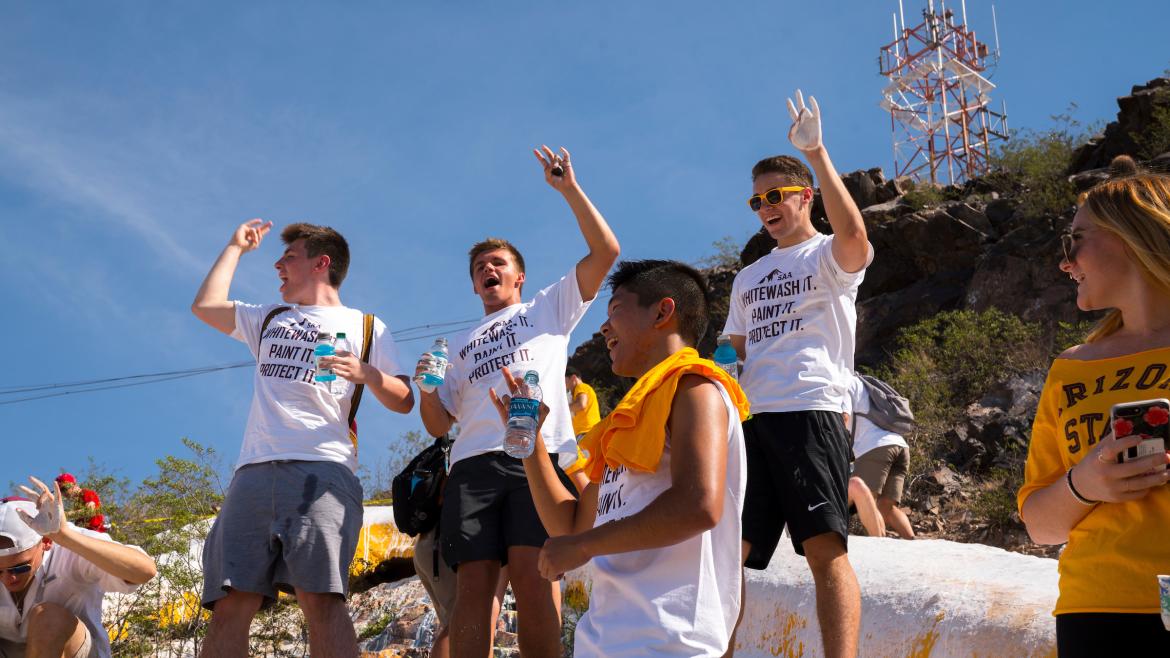 80 years of gold to white

Whitewashing the “A” is one of the longest-standing traditions at Arizona State University; this year marks the 80th time students have hiked Tempe Butte at the start of the school year to paint the giant letter white, symbolizing a fresh start.

Traditions like that are a staple on university campuses nationwide, but there aren’t many that stand the test of time, said Doug Owczarczak, director of the ASU Alumni Association.

“Every layer of paint on that 'A' represents a new year — a new set of Sun Devils with hopes, dreams and ambitions,” he said. “And every year, we will continue to give those freshmen that opportunity to take part in a tradition that thousands of fellow Sun Devils once took part in.”

Tempe ButteTempe Butte may be better known to hikers as Hayden Butte Preserve Park, but Sun Devils will always call it "A" Mountain. has been a university landmark long before the university was officially named Arizona State University. ASU’s predecessor, the Territorial Normal School, was established in 1885. The butte became associated with the school when the Class of 1918 installed the first letter, a large “N.”

The school changed its name to Tempe State Teachers College in 1925, and as a symbolic gesture, students kept one side of the “N” to form the stem of a “T”.

In 1938, the “T” on the butte was removed, and a wooden “A” was formed to represent ASU. It was then that the tradition of whitewashing the “A” began.

On an unfortunate day in September 1952, the “A” was destroyed, allegedly by students from the school down south. Three years later, a new letter “A” — the same one we see today — was installed. It’s made of reinforced steel and poured concrete, measuring 60 feet from the base to the top.

Countless coats of paint later, the yearly tradition of slathering the letter in white continues.

It’s not a coincidence that whitewashing has lasted, Owczarczak said. It fosters a significant bond between the Sun Devils who participate.

Year after year, those new Sun Devils make the trek up the butte.

“I can remember hiking up ‘A’ Mountain in my cowboy hat, and painting the ‘A,’” Owczarczak said. “There were so many emotions running through me. I was excited, nervous, a little scared, but most important of all, I was proud. Proud to be a part of an institution like ASU and to get the chance to leave my mark on a Sun Devil icon.”

It was 7 a.m. Saturday when a group of students gathered around Owczarczak on the quiet corner of College Avenue and Fifth Street. Those students were the Student Alumni Association. The SAA works hard to make the whitewash successful — making sure the tents are in place, the water and ice deliveries are on time, the water stations are set up and that there is enough paint for all those Sun Devils hoping to capture the perfect white pitchfork selfie next to the “A.”

Jenny Madrid, the SAA traditions director and a College of Public Service and Community Solutions student, led the charge this year.

“I found my home here, my home away from home,” she said. “It was great to find a family within ASU so quickly. SAA has been part of my family, and I’ve just grown with it as a person during my time here.” The Student Alumni Association prepares thousands of cups of white paint for new freshmen to use to whitewash the "A" on Saturday morning. 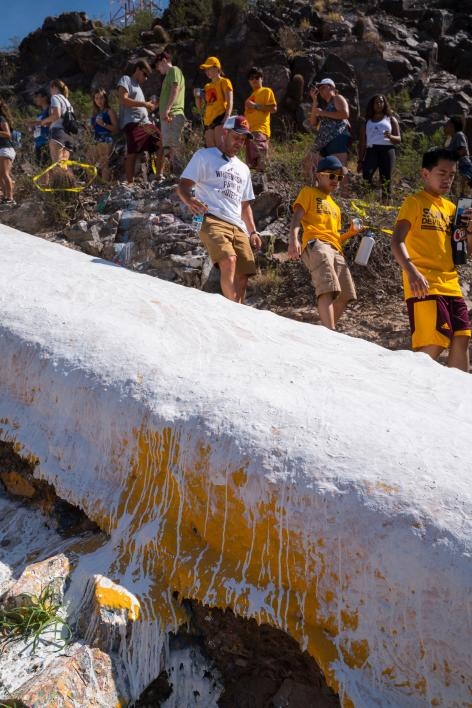 Thousands of students participated in the year's whitewashing, the 80th anniversary of the tradition. 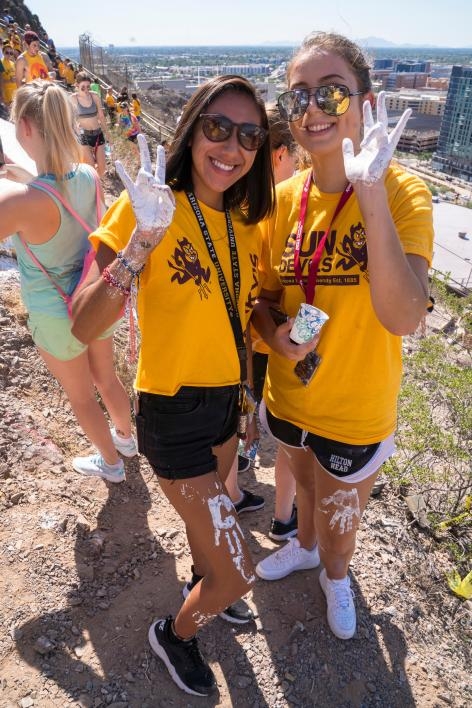 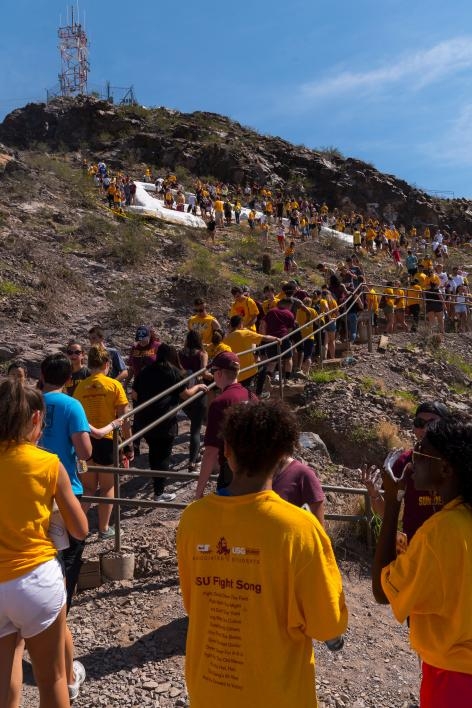 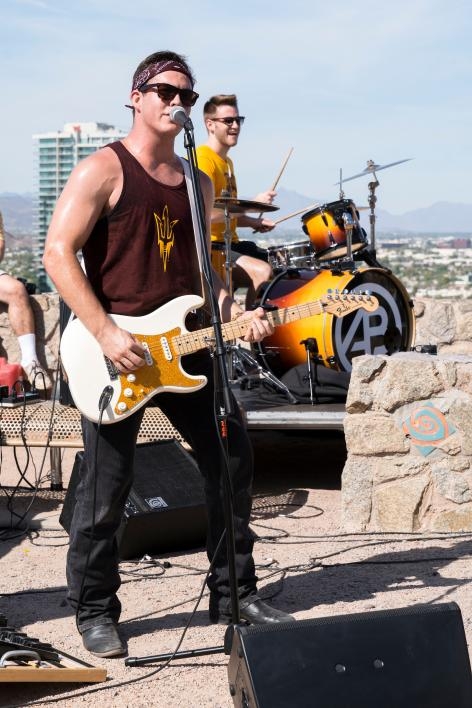 Max Fees, a sophomore studying civic and economic thought and leadership, and Ryan Kemmer, a junior studying informatics, perform with their band, Apollo Bravos, at the top of the mountain.

On this anniversary, being a member of SAA felt a bit more special. For Madrid, the “A” on the butte means pride. It represents the Sun Devil community and symbolizes the heart of ASU, she said.

As the morning continued, a sea of gold started gathering at the base of “A” Mountain. Students from the Class of 2022 formed a line stretching all the way to Wells Fargo Arena. Fresh-faced students walked up with new roommates, chatting and making new friends. The line continued to grow as more students streamed in from all directions. Soon, there was a long, winding trail of gold shirts leading up to the “A.” At the top, a live band rocked out and students started the wave from the top and down the entire trail.

“I think it’s really cool that we got to take part in 80 years of tradition,” McSpadden said. “I was really excited to do this because I’m from out of state so I’ve known about this and I was like, 'I gotta do this, I want to be part of the history of ASU.’”

Very quickly the “A” went from gold to white. There was still an endless trail of clean gold shirts, but heading down were the not-so-gold shirts — spattered with white paint and worn by students with white handprints down their arms and legs.

Matthew McCluskey, a biological science major out of the College of Liberal Arts and Sciences, was one of those students. He climbed down and stopped to take a few photos with his friends.

It’s an unforgettable experience and one he recommends for any future Sun Devil, he said.

As the only other official color of the "A," the white coat of paint is short-lived. As football season gets underway, the "A" returns to classic gold the night before the first home game, thanks to the SAA team. The A Team is then tasked to guard the "A" throughout the football season to make sure vandals are chased away and the "A" remains gold the rest of the year.

Madrid hopes that future Sun Devils not only guard the “A" but that they preserve the butte as well.

“Yes, we come for the 'A' but it’s the whole mountain,” she said. “I hope they follow the tradition of making sure it’s maintained and making sure they preserve the trails while bringing out spirit, pride and tradition at ASU.”

Top photo: Students cheer for ASU at the whitewash the "A" event Saturday on the Tempe campus. Photo by Marcus Chormicle/ASU Now