Donna Cataldo will serve as the University Senate president at Arizona State University for the 2018–19 academic year.

Cataldo is a clinical professor and has taught in the kinesiology program at ASU since 2001. She has over 20 years of experience in exercise physiology and chronic disease management with a focus on heart rhythm analysis, endocrinology and women’s health. She is also the program coordinator for the graduate Clinical Exercise Physiology MS program that she created four years ago. 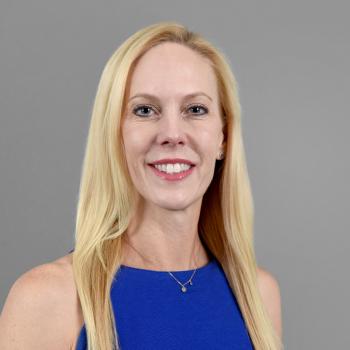 During her tenure with the University Senate she has served as the co-chair of the Senate Online Education Task Force, served as the primary senate faculty liaison for the Learning Management System review and is a now a four-year member of the University Academic Council having served as the Downtown Phoenix campus Senate President during the 2016–17 school year.

Cataldo said she is both energized and humbled to be leading such an outstanding shared governance organization.

“I am amazed at the commitment of the ASU faculty members and academic professionals who involve themselves in our shared governance activities," she said. "Collectively, each of them represent thousands of other ASU faculty members and our ability to understand and effectively insert the faculty perspective into ASU decision-making is, I believe, a big part of what helps set our University apart both nationally and internationally.”

Cataldo indicated that in the upcoming year the senate will finish its work studying online education at ASU and press each of its committees to explore policy topics that will both enhance the university and improve the faculty and academic professional experience and effectiveness.

Year in review: ASU Law continues to raise the bar with incoming class

Editor's note: This story is being highlighted in ASU Now's year in review. Read more top stories from 2018 here.For the second year in a row, the Sandra Day O’Connor College of Law at Arizona State University is welcoming a record-setting class of new students.With a median GPA of 3.76 and a median LSAT score of 163, the 2018 fall JD class comes in even more highly credentialed than the 2017...

Year in review: ASU Law continues to raise the bar with incoming class

For the second year in a row, the Sandra Day O’Connor College of Law at Arizona State University is welcoming a record-setting class of new students. 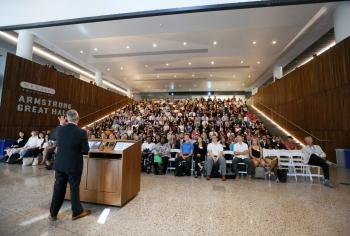 With a median GPA of 3.76 and a median LSAT score of 163, the 2018 fall JD class comes in even more highly credentialed than the 2017 class, which had set top marks for the law school. Hailing from more than 140 different undergraduate schools in more than 40 states, the 291 new students admitted in fall 2018 and taking first-year JD classes are a testament to ASU Law’s status as a destination law school. ASU Law received over 3,300 JD applications, a 64 percent increase over last year.

The rising talent level matches the upward trajectory of ASU Law; with just a half-century of operation, the law school is relatively young but has ascended to the top eight U.S. public law schools, as determined by U.S. News & World Report, and is rated the 22nd-best law school globally by the Academic Ranking of World Universities. That burgeoning reputation is built on the credentials of the school’s instructors and the accomplishments of its alumni.

“Excellence breeds excellence,” ASU Law Dean Douglas Sylvester said. “We have the faculty, resources and dedication to offer a world-class legal education, that’s borne out by the incredible accomplishments of our graduates. Those results are attracting an increasingly talented pool of applicants from throughout the country, which allows us to keep aiming higher.”

ASU Law is also ranked 19th in the nation for percentage of graduates who land high-quality law jobs, at 89 percent, and it has placed in the top 20 for employment for the past five years, according to the American Bar Association. During that same five-year stretch, ASU Law’s bar-passage rate for graduates within two years of law school has been 93.4 percent, far exceeding the overall rate for Arizona law schools, which is just under 64 percent.

ASU Law’s home, the Beus Center for Law and Society, opened in 2016 in downtown Phoenix, a cross-section of federal, state, county and municipal government. That helps bring in top-level judges to teach as adjuncts and opens the door to nearby clerkships and externships. A total of 27 individuals from the graduating Class of 2018 secured 29 clerkships, including with the U.S. Court of Appeals, the U.S. District Court of Arizona, the Arizona Supreme Court and other state and tribal courts. The Class of 2019 already has 13 clerkships.

ASU Law also saw an increase in Master of Legal Studies graduate program enrollment with 45 MLS on-ground students and more than 140 MLS online students. With new initiatives that map to trending industry needs, such as the Entrepreneurship Law and Strategy and Health Care and Corporate Compliance programs, the program has seen an over 600 percent growth since its start a decade ago. The Master of Sports Law and Business program, which stemmed from the MLS, welcomed 71 new students including those who are part of ASU Law’s new Veterans Sports Law and Business program.

ASU Law’s incoming class total of over 600 students comes complete with nine Masters of Law as well as 45 JD transfer students from more than 30 different schools.

The diverse group of incoming students include athletes, musicians, and health and corporate professionals at the top of their field. They have captained swim teams, played lacrosse, hiked the Appalachian Trail and competed in medieval combat. They play the piano and saxophone and sing in the choir, and one student even appeared in the pilot episode of “Glee.”

They are all part of the most decorated incoming class in the school’s history, looking to continue ASU Law’s tradition of success.