In the future, you will be forever

Digital immortality could be more than an archive of old social media posts; it could be a way to teach future generations

A Hollywood director fired for comments tweeted a decade ago.

Memorialized accounts on Facebook, where your entire history exists forever and your contacts can continue posting after you're gone.

Photos from that college Halloween party that continue to surface in your Google results.

This is what digital immortality looks like now. In the future, it may be more elaborate, and could even involve some type of simulacrum of you interacting with people.

Gregg Pascal Zachary, a professor of practice in Arizona State University’s School for the Future of Innovation, has been leading talks on the subject this summer in California. What we leave behind digitally — for better or worse — could be collected in one place to represent you, forever. ASU Now talked to Zachary about what that might look like.

Question: Would the closest thing to “digital immortality” we have now be memorialized accounts on Facebook?

Answer: That’s a start. We might call the desire to keep social media accounts active akin to creating a “digital legacy.” And certain sudden deaths provoke “collective mourning” on the web. Longer term, what’s likely to emerge are software tools and services that will let you ask questions, or even converse, with a deceased relative or wise person from your past. The motive here isn’t merely vanity, but rather finding new forms of contributing to the collective intelligence of our human species. So we advance.

A: Part of why people want to be remembered is so hard-won knowledge can persist and be drawn (upon) by others. This urge after all is the engine of human civilization — the source of the cliché, "standing on the shoulders of giants." No human begins their life projects de novoWithout prior history.. So one question at the core of the study of digital immortality is how do we as a species become more effective learning animals, and at the same time, better teaching animals. In the past, people wrote books that lived on after them. In the most conservative sense, as we embrace new media forms, our life lessons migrate to them also.

Q: What does digital immortality look like to you?

A: In this context, we’re talking about permanent, enduring legacies. … You die, I die, and you our digital "footprints" live on — in whatever forms the techno-scientists create. In the past, individuals bequeathed letters, photos, articles, books to those they left behind. Today, as we live we spawn digital artifacts — and these are what we increasingly leave behind. In the future organizing and presenting these artifacts will be part of the process of revolutionizing the concept of life after death. Our physical bodies won’t persist but valued aspects of our insights and wisdom can.

Q: Would we access the knowledge of the dead through a software “bot” or what some call an avatar?

A: We might. Or technologists could create more lifelike forms of avatars that could actually talk with us.

Q: Could our avatar not end up as some sort of golemAn artificial human being in Hebrew folklore endowed with life.? Looks like us, sounds like us, but — not us.

A: Absolutely. Again the goal here isn’t to trick us into believing the dead are alive. The goal is to transfer usable knowledge to those who remain, so we sustain a better world.

Q: Given the complex socio-technical challenges facing humanity, I suppose we need all the smarts we can get.

A: Exactly. That’s why historians and social observers of innovation such as myself are paying close attention to emerging information technologies that threaten to undermine long-stable notions of life in death. I’m joined in this exploration by ASU Professors Hava Samuelson, Linell Cady, Gaymon Bennett and Ben Hurlbut on a project called “Beyond Secularization” through the Center for the Study of Religion and Conflict. As a group we’ve been asking difficult questions arising from the collision of spirituality, values and the computerization of everyday life. On July 31, we held a workshop on “digital immortality” at the Computer History Museum in Mountain View, California, where we talked with computer designers, artificial intelligence researchers, and even one of the co-creators of Apple’s Siri, Tom Gruber, about our ideas.

A: Surely, how we safeguard the digital representations of the dead is tricky. That’s why we should start thinking now about how to do it!

Above: The Fountain of Youth, by Lucas Cranach the Elder, 1546.

Venkata Akhil Madaraju knew them by their panicked faces.Over the past week, Madaraju spent hours racing around Phoenix Sky Harbor International Airport, collecting international students who arrived to begin their studies at Arizona State University.He doesn’t know the new students before they walk off the plane and into the terminal, but he can usually spot them — exhausted after traveling f... 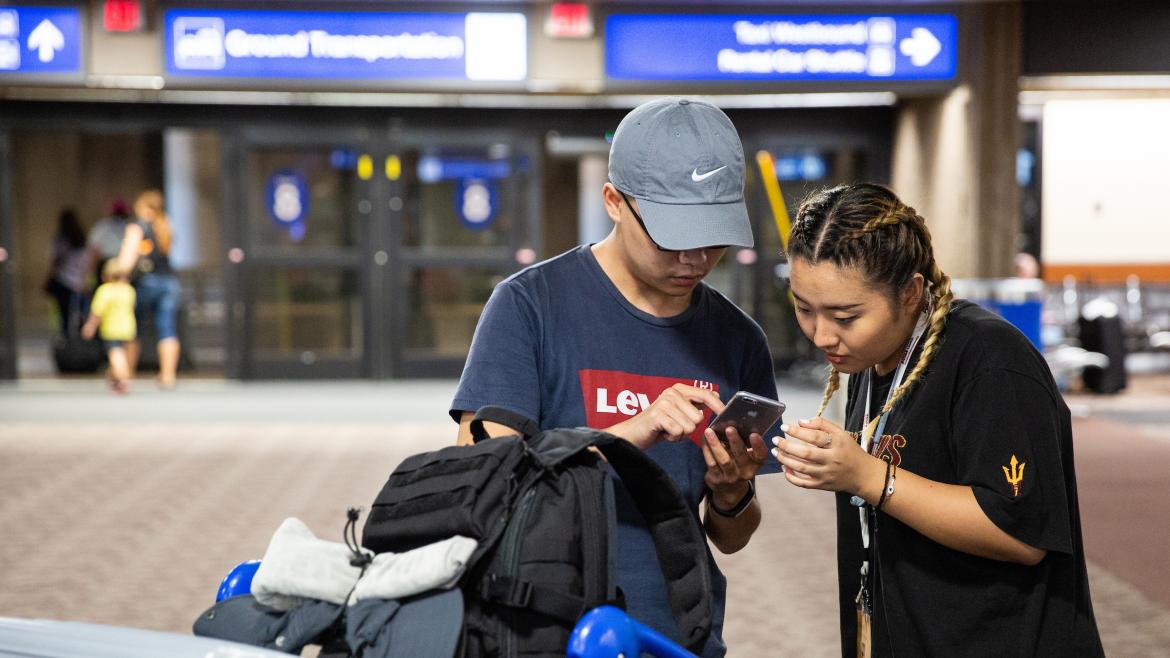 Venkata Akhil Madaraju knew them by their panicked faces.

He doesn’t know the new students before they walk off the plane and into the terminal, but he can usually spot them — exhausted after traveling for nearly 30 hours and looking around for help.

“It’s overwhelming and you don’t know anything, and it’s a completely different experience,” said Madaraju, who is president of the Indian Students Association at ASU and arrived from India himself a year ago.

The Indian Students Association is part of the airport arrival program run by Educational Outreach and Student Services at ASU. Different international student groups take turns staffing tables near the baggage claim area in terminals 3 and 4 during arrivals week. The greeters answer questions and help the newcomers through baggage claim and to the shuttle service, which is provided free by ASU, according to Earl Lee, coordinator of international student engagement for Educational Outreach and Student Services. The shuttle will take the students to any of the four ASU campuses or other housing in metro Phoenix.

Any international student can sign up for the welcome; hundreds of students registered to be met at the airport last week by a friendly Sun Devil face.

Madaraju, a graduate student studying computer science, said that the Indian Students Association greeted more than 200 students from India just on Friday and Saturday. When dust storms played havoc with flights early last week, he and other greeters stayed at the airport until 4 a.m. 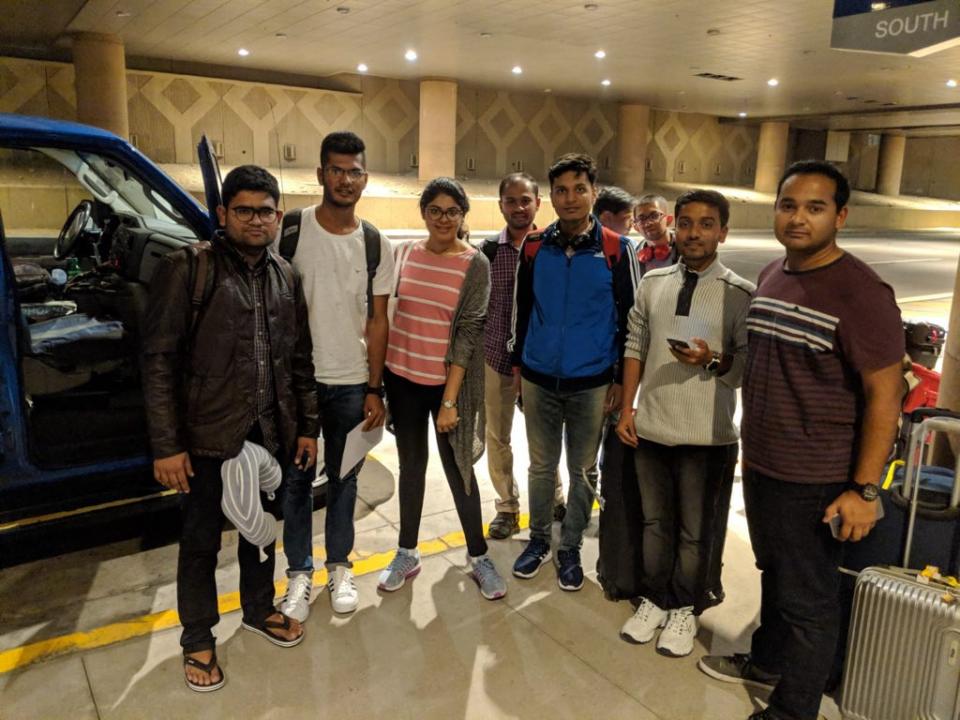 Duan Wenxi traveled from Chengdu, China, to study communications at ASU, and he arrived late Friday afternoon, exhausted but excited. He was met by members of the Fun-Fun Student Organization.

“I want to enhance my English-speaking skills, and I want to be a truly international student,” said the freshman as he carted several large suitcases to the shuttle.

The university hosts about 12,000 international students who travel thousands of miles to study at ASU, where it's both exciting and overwhelming dealing with a different language, a new academic system, making friends and the scorching heat. In recent years, ASU has expanded its services for this group. Graduate students and undergraduates get a full week of orientation, starting Wednesday, learning about all the opportunities available to them — social clubs, conversation groups, tutoring, legal information, classroom expectations and tips on how to attend a football game. They attend workshops on academic integrity and participate in icebreakers to encourage them to bond with each other — a balm against the inevitable bouts of homesickness.

When the stress builds, all students can take advantage of the counseling services at ASU, which are designed with cultural needs in mind.

But in the first few hours after landing at Sky Harbor last week, most international students are worried about things like how to set up a bank account and where to charge their phones.

“They feel really happy to see someone helping them,” Madaraju said. “A lot of them need to use my mobile to call their parents and tell them they’re safe.”