A baby girl sits on the floor, crying. A man picks up the child and attempts to soothe her by patting her back and quietly singing in her ear. The baby sighs and stops crying.

This scenario is an example of a secure attachment between a child and her father, but what if her parent or caregiver had not been there to offer comfort? What might happen to the quality of the relationship between the child and caregiver? The answers to these questions are unknown, but research from the Arizona State University Department of Psychology suggests myriad problematic outcomes in the development of a child are possible when a caregiving relationship is insecure. 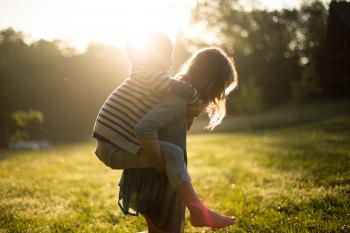 Research from the Arizona State University Department of Psychology suggests myriad problematic outcomes in the development of a child are possible when a caregiving relationship is insecure. Photo by Jenn Evelyn-Ann on Unsplash Download Full Image

The researchers quantified how much the quality of attachment in a caregiving relationship predicted the self-regulation abilities of children. Self-regulation is the ability to adjust behavior depending on the situation and is extremely important because it predicts performance in school, social behaviors, mental health and more.

Nancy Eisenberg, Regents’ Professor of psychology, performed the work with Susanna Pallini of the University of Roma Tre and researchers at Sapienza University of Rome. The study was published in Psychological Bulletin in May.

The project started with a question: What relation does a caregiving relationship have to a child’s self-regulation ability? The researchers focused on self-regulation because it appears to affect many, if not all, aspects of a child’s development.

“Self-regulation is so important for children’s socioemotional adjustment and relates to nearly everything important in child development, including problem behaviors and mental health, academic achievement, prosocial behaviors and sympathy for people, among other things,” Eisenberg said. “If self-regulation is compromised, a host of other skills are likely to be compromised.” 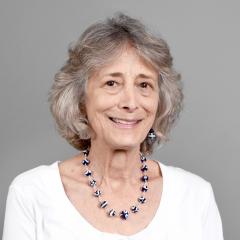 The researchers classified the adult-child caregiving relationships in the data set based on the type of attachment, which is defined by how the caregiver and child perceive each other and by how they interact.

For older children, attachment can be measured using questionnaires, while for younger children, attachment is often measured with a series of structured separations and reunions between the child and caregiver. A securely attached child will cry or show signs of distress when separated from his or her parent or caregiver but is easily comforted when reunited. A child in a caregiving relationship defined by an insecure attachment might not react at all when the parent or caregiver departs or might overreact by becoming so upset that the caregiver cannot alleviate the child’s distress. A child with disorganized attachment often seems immobilized and shows little attachment behavior.

“We reported only a correlation between attachment and self-regulation,” Eisenberg said. “But other research indicates that separation can affect attachment security. If attachment has a causal effect on self-regulation, then the children experiencing traumatic separations could have many developmental problems.”

Eisenberg and her collaborators have just finished an additional meta-analysis that investigates the relation between attachment style and attention problems in children. The findings are similar — securely attached children have fewer attention problems — and the pattern of findings emphasize the importance of stable and secure caregiving relationships for children.

Since Darwin first laid out the basic principles of evolution by means of natural selection, the role of competition for food as a driving force in shaping and shifting a species’ biology to outcompete its adversaries has played center stage. So important is the notion of competition between species, that it is viewed as a key selective force resulting in the lineage leading to modern humans.The...

Since Darwin first laid out the basic principles of evolution by means of natural selection, the role of competition for food as a driving force in shaping and shifting a species’ biology to outcompete its adversaries has played center stage. So important is the notion of competition between species, that it is viewed as a key selective force resulting in the lineage leading to modern humans.

The earliest true primates, called “euprimates,” lived about 55 million years ago across what is now North America. Two major fossil euprimate groups existed at this time: the lemur-like adapids and the tarsier-like omomyids. Dietary competition between these similarly adapted mammals was presumably equally critical in the origin and diversification of these two groups. Though it has been hinted at, the exact role of dietary competition and overlapping food resources in early adapid and omomyid evolution has never been directly tested. 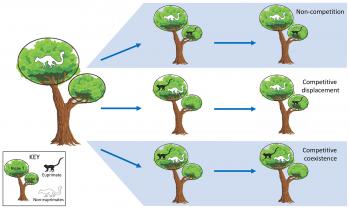 New research published online Tuesday in the Proceedings of the Royal Society B led by Laura K. Stroik, an alumna of ASU’s School of Human Evolution and Social Change (SHESC) and currently assistant professor of biomedical sciences at Grand Valley State University, and Gary T. Schwartz, associate professor with SHESC and research scientist at ASU’s Institute of Human Origins, confirms the critical role that dietary adaptations played in the survival and diversification of North American euprimates.

“Understanding how complex food webs are structured and the intensity of competition over shared food resources is difficult enough to probe in living communities, let alone for communities that shared the same landscape nearly 55 million years ago,” Stroik said.

The researchers utilized the latest in digital imaging and micro CT scanning on more than 350 fossil mammal teeth from geological deposits in North America. They sought to quantify the 3D surface anatomy of molars belonging to extinct representatives of rodents, marsupials and insectivores — all of which were found within the same geological deposits as the euprimates and were thus likely real competitors.

The high-resolution scans allowed them to capture and quantify details of how sharp, cresty or pointy the teeth were. In particular, they looked at molars, or teeth at the back of the mouth, useful in pulverizing and crushing food or prey. The relative degree of molar sharpness is directly linked to the broad menu of dietary items consumed by each species.

Examples of micro CT scans of molars and the types of measurements researchers were looking at.

Stroik and Schwartz used these aspects of molar anatomy to compute patterns of dietary overlap across some key fossil groups through time. These results were then weighed against predictions from three models of how species compete with one another drawn from the world of theoretical ecology. The signal was clear: Lineages belonging to the adapids largely survived and diversified without facing competition for food. The second major group, the omomyids, had to sustain periods of intensive competition with at least one contemporaneous mammal group. As omomyids persisted into more recent geological deposits, it is clear that they evolved adaptive solutions that allowed them to compete and were usually victorious.

“Part of what makes our story unique is that for the first time we compared these fossil euprimates to a range of potential competitors from across a diverse group of mammals living right alongside adapids and omomyids, not just to other euprimates,” Schwartz said. “Doing so allowed us to reconstruct a far greater swath of the ecological landscape for these important early primate relatives than has ever been attempted previously.”

The key advance of this new research is the demonstration that diet did in fact play a fundamental role in the establishment and continued success of euprimates within the North American mammalian paleocommunity. An exciting outcome is the development of a new quantitative tool kit to diagnose patterns of dietary competition in past communities. This will now allow them to explore the role that diet and competition played in how some of these fossil euprimates continued to evolve and diversify to give rise to living lemurs and all higher primates.