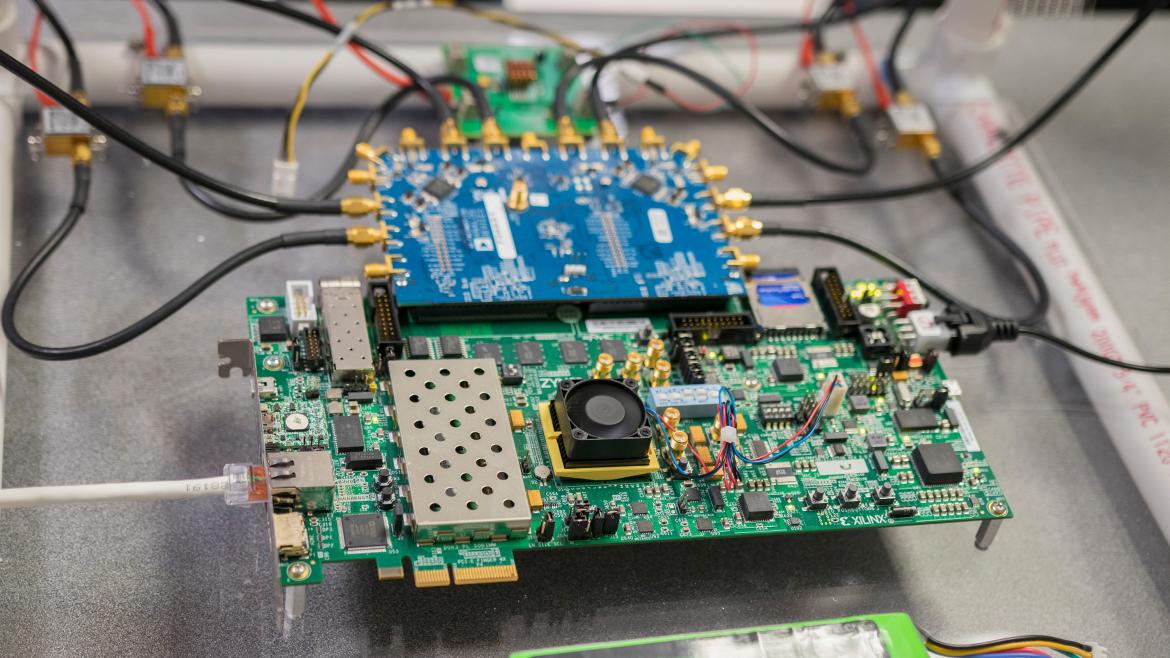 ASU project is designing the computational architecture of the future

Scotty, we need more power. Or, we need our tech to use less of it.

To that end, an Arizona State University research team has received a $17 million grant from the U.S. Department of Defense’s Defense Advanced Research Projects Agency (DARPA) to seek to create a new framework for designing and building advanced computing platforms that will circumvent the power constraints that exist in a growing range of technologies.

Under DARPA's new multi-year Electronics Resurgence Initiative research program, improved processing capabilities will enable sophisticated applications to operate more effectively in technologies like those that control unmanned aerial vehicles and the internet of things, as well as consumer electronics such as cellphones, cameras and health-monitoring devices.

Aspirations to achieve broader technological capabilities are constrained by the limits of current computing technologies, said Daniel Bliss, a systems engineer and an associate professor of electrical, computer and energy engineering at ASU.

“I am always computation hungry," Bliss said. "I’m interested in taking steps forward on a lot of advanced communications, radar and medical systems, but I never have the computational ability I need."

Bliss is leading the Domain-Focused Advanced Software-Reconfiguration Heterogeneous portion of the Domain-Specific System On-Chip program, one of many research efforts under the Electronics Resurgence Initiative. The project aligns precisely with the aims of ASU’s Center for Wireless Information Systems and Computational Architectures (WISCA), which Bliss directs. The assignment is to build a new framework to push development of the next generation of high-performance, embedded, heterogeneous computer processors that are more capable, more power-efficient and easier to use, according to Bliss.

The initiative’s directives “are all about exactly what we want to do,” he said. “The bottom line is to help satisfy that hunger for greater computational power that is required by sophisticated signal processing applications.”

Heterogeneous processing boosts performance and energy efficiency on a single, integrated circuit by using multiple types of processors with specialized capabilities to perform specific computing tasks. Because heterogeneous processors are notoriously difficult to program, the WISCA team’s objective is to provide software tools and on-chip intelligence to dramatically simplify implementation.

A key part of DARPA’s objective is to engage the electronics industry and commercial enterprises in Electronics Resurgence Initiative research projects. So Bliss and his ASU team will be working not only with fellow researchers at Carnegie Mellon University, the University of Arizona and the University of Michigan, but also with Arm Limited, EpiSys Science Inc., and General Dynamics Mission Systems.

“We are going to go all the way from providing ideas for making it easier to figure out how this new kind of chip should be assembled to providing the software to help put it together,” Bliss explained. “Then we will give you the software and analysis tools to help you program these chips to run multiple applications, including some tools that run in real-time inside the chip."

Moreover, the team hopes to embed intelligent and machine-learning functionality into the chips.

“This enables the chip itself to learn, based on how it is being used, so that it can operate more efficiently in the way it is running various applications,” Bliss said.

Beyond those enhanced capabilities, processors using these chips will be capable of running extensive, sophisticated computations with significantly less power — reducing operations that now take hundreds of watts of electrical power to only several watts.

Other research teams working under the Electronics Resurgence Initiative are integrating different materials into computer processors, enhancing the underlying physics involved in processing and developing novel microelectronics designs and potential new applications. These efforts combined could alter the paradigms of how computer processing is done or even fundamentally change the technology used to do processing, Bliss said.

Unmanned autonomous systems are among the newer technologies that rely heavily on signal processing. But they present a challenge, Bliss said, because “they have limited energy availability, which limits capabilities given current computational systems.”

In addition, the ASU team plans to develop tools that design and use heterogeneous computing processors for signal-processing applications, which will improve high-performance communications, sensing and radar technologies, as well as biomedical and health-assessment devices.

“It will affect the technology that lives in cellphones, in your smartwatch, in your camera, the information systems in your car, and it could make all of this tech less expensive, more energy efficient and more powerful," Bliss said.

“What should come out of this are better processors for all kinds of things we use in our everyday lives.”

Morgan R. Olsen's career has been filled with successes in the fields of finance and higher education. And now, he has one more honor to his name. Olsen, Arizona State University's executive vice president, treasurer and chief financial officer, recently was honored with the 2018 National Association of College and University Business Officers (NACUBO) Distinguished Business Officer Award. NACUB... 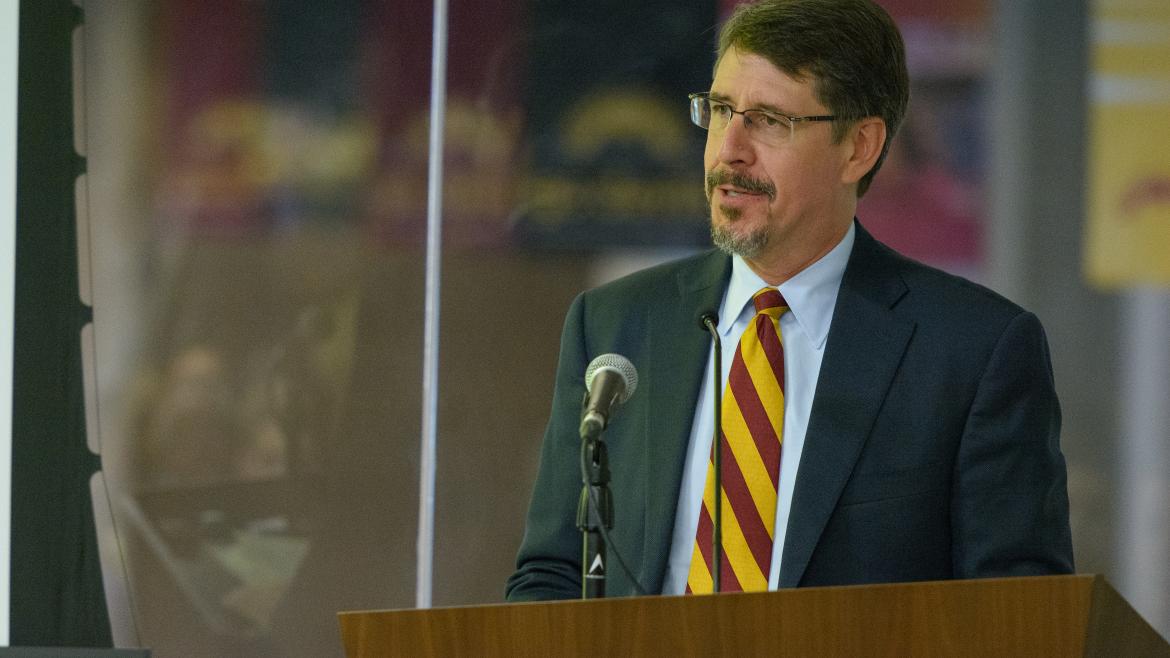 Morgan R. Olsen's career has been filled with successes in the fields of finance and higher education. And now, he has one more honor to his name.

Olsen's award was presented to him at NACUBO's annual meeting held July 21­­–24 in Long Beach, California.

“While this prestigious award is truly an honor to receive, I am most proud of being a member of an organization that focuses on how financial and business officers in higher education can elevate ideas into action,” Olsen said. “As leaders in our institutions, which play such an important role in allowing people to reach their full potential, we have a great responsibility to help ensure that American colleges and universities improve both our society and the quality of life for as many people as possible.”

Olsen came to Tempe in 2008 after serving as executive vice president and treasurer at Purdue University. He currently manages both the finances and administration of the country's largest public research university, holding responsibility for administering ASU’s $3.2 billion annual operating budget and a capital projects program exceeding $1 billion.

"Dr. Olsen is not only an accomplished executive but also a good boss who cares about his people," said Nichol Luoma, ASU associate vice president for university business services and sustainability operations officer. "He is a dynamic leader who expects his units to model ASU's charter in everything we do. We are allowed and expected to challenge the status quo, commit to continual process improvement, demonstrate exemplary customer service and ensure we are keeping the university safe while supporting innovation and informed risk-taking."

Olsen's NACUBO honor is his second major award in as many years, as he was honored by the Financial Executives International Arizona chapter with its 2017 Nonprofit CFO of the Year Award.

"This recognition from NACUBO confirms the belief of his colleagues in Business and Finance that Arizona State University has a visionary CFO providing leadership to our organization," Luoma added.

NACUBO represents the chief business and financial officers of more than 1,900 colleges and universities across the country through advocacy efforts, community service, and professional development activities. The association's mission is to advance the economic viability, business practices and support for higher education institutions in fulfillment of their missions.

Olsen served as chair of NACUBO's board of directors before joining ASU.