The availability of water from underground aquifers is vital to the basic needs of more than 1.5 billion people worldwide, including those of us who live in the western United States. In recent decades, however, the overpumping of groundwater, combined with drought, has caused some aquifers to permanently lose essential storage capacity.

With the hope of providing water resource managers with better tools to help keep aquifers healthy, a team of scientists from Arizona State University and the Jet Propulsion Laboratory (JPL) are using the latest space technology to look underneath Earth’s surface to measure this precious natural resource.

They’ve focused their efforts on one of the world’s largest aquifer systems, located in California’s Central Valley, measuring both its groundwater volume and its storage capacity. The results of their most recent findings in this groundbreaking study have been recently published in Water Resources Research.

California’s Central Valley is a major agricultural hub covering an area of about 20,000 square miles. It produces 8 percent of all U.S. agriculture by value — and more than 25 percent of the nation's food crops — at an estimated $17 billion per year.

Beyond agricultural crops, the Central Valley aquifer system provides necessary water for people and wetlands, supplying about 20 percent of the overall U.S. groundwater demand. With a combination of population increases and drought, this aquifer is ranked one of the most stressed aquifer systems in the world.

While past studies on water resources and drought have focused mainly on low-resolution or local scale measurements of groundwater dynamics, the research team for this study, which includes ASU School of Earth and Space Exploration scientists Chandrakanta Ojha, Manoochehr Shirzaei and Susanna Werth, with Donald Argus and Thomas Farr from JPL, went an even more high-tech route.

They used the data-collection features of several satellite-based Earth remote sensing techniques to get a more consistent and higher-resolution view of California’s Central Valley aquifer system than has ever been done before.

“Ironically, we had to go several hundreds of miles up into space to see what was going on under the surface of our planet," said co-author Werth, who also has a joint appointment at the ASU School of Geographical Sciences and Urban Planning,

Using these high-tech remote sensing techniques, the team analyzed data from the 2007-2010 drought period and began to map the entire California Central Valley.

“It’s great when we can use our high-tech Earth-orbiting satellites to help solve real-world problems in California,” co-author Farr said.

They measured land subsidence (when land above and around an aquifer shifts downward) using space-borne Interferometric Synthetic Aperture Radar (InSAR) and added that to data on groundwater levels sampled at thousands of wells across the Central Valley.

“It’s this combination of literally terabytes of data that helps us get the best picture of what is happening below the surface,” lead author Ojha said. 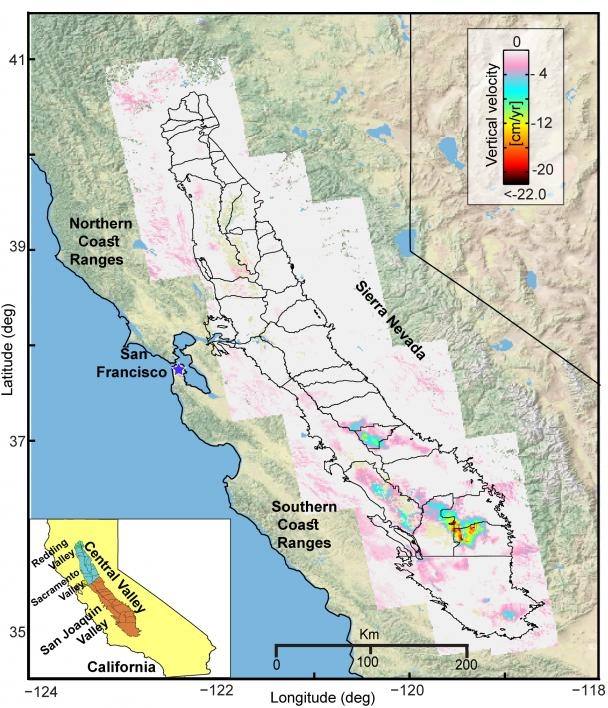 This InSAR deformation map indicates the rate of downward movement (sinking) of the Earth’s surface, during the study period from 2007–2010. The map highlights the occurrence of the fastest land subsidence in the southern portions of California's Central Valley. 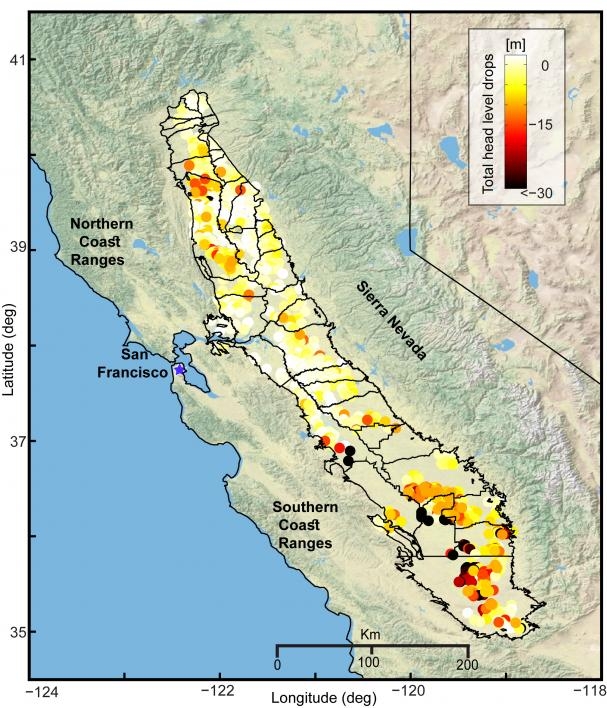 Groundwater well levels dropped several meters at most of the 1,600 observation wells across the Central Valley, from 2007–2010. These observations are strongly associated with groundwater extraction during the drought. 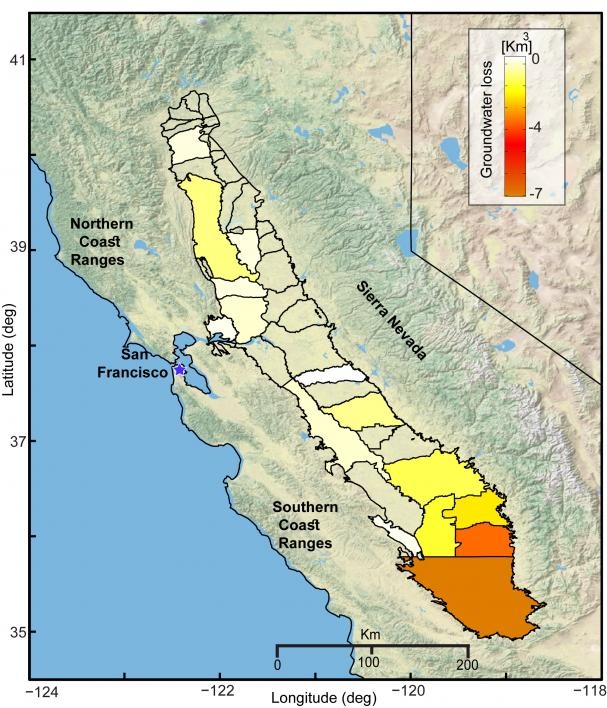 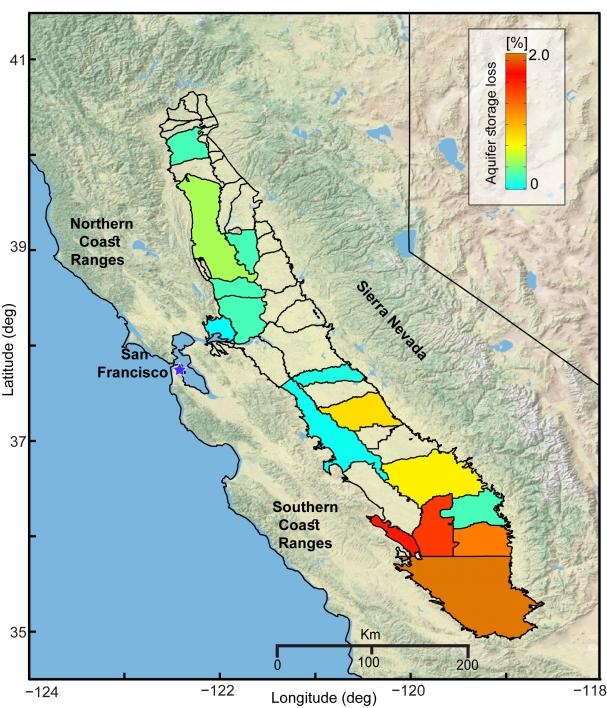 Aquifer storage loss for the study period from 2007–2010 across California’s Central Valley.

A bellwether for aquifers around the world

From this analysis, the team found that between 2007 and 2010, there was a significant drop in ground levels in the southern area of the Central Valley. In fact, in a three-year period, there was a drop of nearly 32 inches, a decline that should normally take decades.

“Groundwater overdraft in some parts of the Central Valley has permanently altered clay layers, causing rapid ground sinking that can be measured by radar satellites from space,” co-author Shirzaei said.

The most startling result of this study, however, is the permanent loss of water storage capacity in the aquifer system. During the 2007-2010 drought, up to 2 percent of storage capacity was lost entirely when the water level declined and the clay layers in the system were permanently compacted.

“That storage capacity cannot be recovered through natural recharge,” Ojha said. “This means that during the wet season, when the Central Valley gets rain, there is less space to store it, making groundwater supplies scarcer during future droughts.”

New satellites to measure the effects of drought

The next steps for this team will be to focus on the period of drought in California from 2012 to 2016, which was even more detrimental to the Central Valley aquifer than the 2007-2010 drought period.

“Periods of drought have long-term effects on groundwater supplies and create major challenges for groundwater management,” said Maggie Benoit, a program director in the National Science Foundation’s Division of Earth Sciences, which provided funding for the research. “Now researchers are developing new methods for monitoring groundwater levels using satellite-based measurements of Earth’s surface, providing a more comprehensive picture of the health of our nation’s groundwater.”

The researchers plan to integrate radar measurements with additional data from the newly launched NASA/GFZ GRACE Follow-On (GRACE-FO) satellites. The GRACE FO mission, which launched on May 22, consists of two nearly identical satellites that follow one another along the same orbit. The satellites continually measure the distance between them, which changes depending on the gravity field over which they are orbiting. Since oscillations of groundwater change the gravity field, scientists can use the data to map underground water location and volume change.

And the work will not end there. The research team hopes to extend the research they are doing in California to Arizona and other areas of the arid Southwest.

“The whole region is affected by a long-term drought, with differences in severity, climate conditions, groundwater geology and water management approaches," Werth said. "Our hope is that these studies will enable authorities and decision makers to accurately manage water resources and plan for future water allocations. Water managers need to know about the irreversible processes taking place and how to act to prevent a future crisis.”

Nick Stephanopoulos, assistant professor in Arizona State University's School of Molecular Sciences and member of the Biodesign Institute’s Center for Molecular Design and Biomimetics, has been named as a recipient of a National Science Foundation (NSF) CAREER Award.NSF CAREER Awards are the most competitive and prestigious awards given by the NSF to junior faculty. They support teacher-scholars...

Nick Stephanopoulos, assistant professor in Arizona State University's School of Molecular Sciences and member of the Biodesign Institute’s Center for Molecular Design and Biomimetics, has been named as a recipient of a National Science Foundation (NSF) CAREER Award.

NSF CAREER Awards are the most competitive and prestigious awards given by the NSF to junior faculty. They support teacher-scholars who effectively integrate research and education within the context of the mission of their organization. Stephanopoulos' award is titled "Hybrid protein-DNA nanostructures and devices." 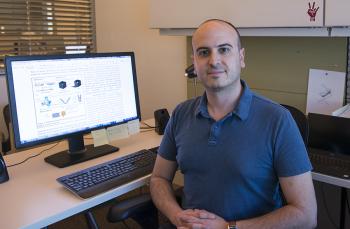 Stephanopoulos' award follows closely on the heels of NSF CAREER awards for Ryan Trovitch, Gary Moore and Steve Presse in 2017.

Stephanopoulos and his group work on the design, synthesis and application of functional nanomaterials using self-assembling molecules inspired by biology. The work is highly interdisciplinary and lies at the interfaces between self-assembly, organic synthesis and bioconjugation chemistry, biology, engineering and nanoscience.

The specific goals of the NSF CAREER Award are to addresses the challenge of creating new designer materials to interface with biological systems in order to help in the treatment of disease, regrow damaged tissue or uncover fundamental mechanism of biochemical processes. Stephanopoulos and his group design and build materials using DNA and protein building blocks in smart and programmable ways. DNA structures provide unparalleled control over nanoscale structure, and proteins provide wide molecular functional diversity. By combining these two structure types, Nick and his group propose to develop novel nanofibers that mimic biological tissue, 3D cage structures that mimic viruses and structures that have functional control devices such as hinges or boxes that respond to external stimuli such as light.

Hao Yan, director of the Biodesign Center for Molecular Design and Biomimetics and also Milton D. Glick Distinguished Professor in the School of Molecular Sciences, said, “Nick is a rising star in bio-nanotechnology and brought fresh and innovative ideas to the Center of Molecular Design and Biomimetics. He has built a group of talented graduate students, postdocs and undergraduate students who are tackling important problems in the field.”