ASU experts across a variety of fields talk about the many challenges we face when it comes to mass shootings, protecting the 2nd Amendment and public safety

Guns — few issues evoke as much passion and raw emotion from almost all corners of society. No matter what your opinion of them is, they are a defining part of what it means to be an American. Whether you view guns as a public-safety issue, a constitutionally protected right or both, their place in our society provokes strong reaction and heated debate.

Despite those polarizing debates, addressing gun violence is not black-and-white, but instead nuanced and multifaceted. And people with good-faith, honestly held opinions on both sides of the issue may end up feeling equally uncomfortable with possible solutions.

Here, Arizona State University experts from a variety of disciplines, including law, education and design, weigh in on the issues regarding gun violence and mass shootings.

Does the Second Amendment really stand in the way of meaningful gun regulation in the United States? The answer has not been forthcoming from the Supreme Court, which hasn’t heard a Second Amendment case in almost a decade. ASU Now turned to Paul Bender, a professor of law, constitutional law expert and dean emeritus of the Sandra Day O'Connor College of Law, to find out what it would take to enact major gun reform.

Addressing our knowledge gaps about firearm injuries and deaths

Sometimes, it's hard to admit that we don't have all the answers, especially when it comes to gun violence. Which is where research comes in. Jesenia Pizarro, an associate professor in ASU’s School of Criminology and Criminal Justice, is one of 20 researchers from a dozen universities and health-care organizations taking part in an interdisciplinary study on firearm injuries and deaths of children and teens. ASU Now spoke with Pizarro to learn more about what questions the study hopes to answer.

Adapting learning spaces for a culture of safety

For insight on the discussions taking place on the future of school design in light of school shootings, ASU Now turned to Philip Horton, assistant director and head of architecture at the Herberger Institute for Design and the Arts, with a few questions.

ASU English Professor James Blasingame strongly believes that books are a “roadmap to life” for young adults that can be used to explore the causes and impact of teen violence and school shootings. That’s why he’s devoting time to developing a curriculum for young adult readers so that educators and students can have dialogue on issues such as gun control, bullying, mental health and school climate.

Sarah Lindstrom Johnson, an assistant professor in the T. Denny Sanford School of Social and Family Dynamics, has been researching school climate for years. A former high school teacher in Baltimore, she studies school environments and how they affect student learning. "It involves thinking about school shootings as part of a bigger puzzle of supporting students’ social-emotional needs," she said.

Schools are increasingly staking their hopes on high-tech security systems originally developed for the military, police and private industry. Many public schools now have resource officers, metal detectors and security cameras; practice lockdown drills and active-shooter training; and have expanded mental health screening and on-campus counseling. While all of those measures are necessary, they’re still not sufficient, said Carl Hermanns, a clinical associate professor in the Mary Lou Fulton Teachers College.

Any news organization could tell you that guns are almost always a timely topic. Hardly a year has gone by over the past decade when there wasn’t a mass shooting, and in 2018 alone, there have already been several major incidents. Sherry Towers, a statistician, modeler and research professor at ASU, began her academic career studying the spread of disease in populations. As incidents of mass shootings began to occur more frequently in the U.S., she wondered if contagion might have something to do with it.

Mental health and gun violence — is there any action we can take?

It has become routine. Reports come in on the news of another mass shooting. This time it’s at a school. A church. A newsroom. Amid the grief and the rhetoric about gun control and mental health, one question surfaces: How can we prevent this? Ronald O’Donnell, a clinical professor in ASU's College of Health Solutions, shared with ASU Now his thoughts on what public policy efforts, in the realm of mental health, could be pursued to encourage a decline in these events.

Tucked inside the University Services Building adjacent to ASU's Tempe campus is a small office with a big job: to prepare the university for major emergencies. Built from the ground up by a former assistant police chief and military veteran, the Office of Risk and Emergency Management in its short existence has transformed the university’s incident-response structure from an additional duty within the ASU Police Department to a full-time operation benchmarked by other institutions.

Julie Ann Wrigley isn’t one just to talk about what needs to happen in society. She takes action. At Arizona State University alone, Wrigley has invested more than $50 million dollars in something she believes deeply in: sustainability.Without Wrigley’s investments in ASU, the university wouldn’t be the leader in sustainability that it is today. Her philanthropy at the university started in ...

Julie Ann Wrigley isn’t one just to talk about what needs to happen in society. She takes action. At Arizona State University alone, Wrigley has invested more than $50 million dollars in something she believes deeply in: sustainability.

Without Wrigley’s investments in ASU, the university wouldn’t be the leader in sustainability that it is today. Her philanthropy at the university started in 2004, when she joined ASU President Michael M. Crow at a pivotal retreat where many of the world’s sustainability leaders discussed challenges facing our planet and what a university could do to address them. At this retreat, the vision for an interdisciplinary sustainability institute was born. 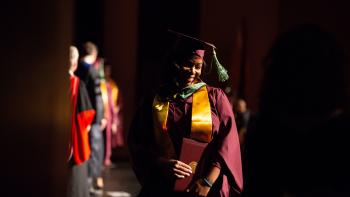 Farren Hinton, graduating with a master's degree in sustainability leadership, walks across the stage at the School of Sustainability convocation on May 10, 2018. Photo by Summer Sorg/ASU Now Download Full Image

Wrigley helped make this vision a reality with an initial gift of $15 million dollars. In doing so, she became the co-founder of ASU’s Global Institute of Sustainability, a dynamic hub of research, education and solutions. After Wrigley invested another $25 million in the institute, it was renamed after her in 2014.

With the institute grew the nation’s first and best School of Sustainability, established on ASU’s Tempe campus. Wrigley gifted $10 million dollars so that ASU could recruit the world’s top sustainability scholar-researchers to teach at the school, providing students with an exceptional education in a budding and urgently needed field. Since the school's 2007 launch, 1,234 students have graduated with sustainability degrees at ASU. That’s 1,234 more leaders who are helping the world navigate an uncertain future in ways that are healthy for the planet and its people.

Even after investing so generously — not just financially but also by giving her time and her talents — Wrigley isn’t done investing in students and in the planet’s future. With a matching investment from President Crow, Wrigley just created a new scholarship for students enrolled in the School of Sustainability: the Rob Melnick Scholarship in Sustainability Solutions, named in honor of Professor Melnick’s 10 years of leadership and service to the ASU Wrigley Institute and the university.

“One of the great privileges of my job is that I get to work with leaders who give of their time and resources to help solve society’s biggest problems, and few match the commitment of Julie Ann Wrigley,” said Crow. “Few match her energy, her passion, her dedication to the issues we address in the Global Institute of Sustainability. Perhaps most importantly, few engage as generously with our students as Julie does. She’s an outstanding partner in important work.”

Wrigley’s new scholarship in Melnick’s name will be awarded to an ASU School of Sustainability student each year to support an education, research or service activity that prepares them to address a specific sustainability challenge.