Scientists in the Arizona State University Department of Psychology have discovered biological characteristics of young babies can forecast how vulnerable they might be to their caregiving environment. The researchers measured infant vagal toneActivity in the vagus nerve, a fundamental component of the parasympathetic branch of the autonomic nervous system., a noninvasive indicator of cardiovascular function, at 6 weeks of age and found it predicted how maternal postpartum depressive symptoms affected the child’s behavior at 3 years. Children with low vagal tone fared worse when their mothers suffered from more postpartum depressive symptoms. The findings will be published in Child Development on July 18. 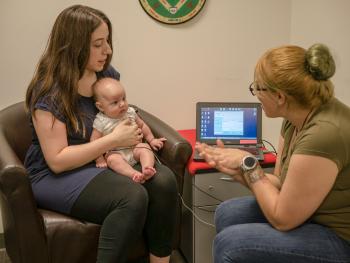 Yessenia Moreno, a researcher in the ASU Department of Psychology, measures the respiratory sinus arrhythmia (RSA) in 12-week-old, Wesley Jewell.

A biomarker for resilience?

ASU psychology graduate student Jennifer Somers, the lead author on the study, wanted to know if biological factors could explain how the caregiving environment during infancy affects children as they develop.

“We know children are affected unequally by maternal postpartum depressive symptoms, and our goal was to start to understand which kids are more susceptible,” she said. “Little is known about how biological factors influence risky behavior and resilience among ethnic minority children raised in impoverished environments.”

The experiment was a longitudinal study of 322 low-income, Mexican-American families. It is part of a larger study called Las Madres Nuevas that focuses on what predicts postpartum depression in low-income ethnic minority women, who are at higher risk. The researchers asked how biological factors during the earliest phases of a child’s life and maternal postpartum depressive symptoms jointly contributed to children's behavior problems at ages 2 and 3.

“It is so important to understand for whom and under what circumstances depression in mothers is associated with negative effects on children’s functioning and what might explain those associations,” said Sherryl Goodman, professor of psychology at Emory University. Goodman is an expert on the effects of postpartum depression in children and was not involved with the study. “This study has important implications for theory, particularly in terms of understanding variability in the strength of association between depression in mothers and child functioning.”

When a less variable heart-rate is a good thing

To test whether characteristics of a child’s cardiovascular system might buffer against the effects of postpartum depressive symptoms in the mother, the researchers measured the respiratory sinus arrhythmia (RSA) in 6-week-old infants. The RSA indicates how variable the heart rate is and is easily and noninvasively measured using electrocardiography.

When the children were 24 months old, the mother and child visited ASU, where the researchers observed the mother-child pairs and noted how the child related to their caregiver.

“At age 2, toddlers should be able to use their caregiver to regulate their behavior, to adjust and adapt to new environments,” Somers said. “Postpartum depressive symptoms in mothers can have an enduring effect for some children and make them less likely to use their caregivers as a scaffold in situations where they need help to adapt.”

Three years after the study began, the mother provided a report on the child’s behavior. Children with less variability in their heart rate, or low RSA, showed more behavior problems when their mothers had postpartum depressive symptoms in the first six months. These same children fared better when their mothers reported fewer symptoms.

“The prevailing theory has been that higher RSA or vagal tone was associated with children being more vulnerable to their caregiving environment, but our findings suggest the opposite,” said Linda Luecken, professor of psychology and a principal investigator on the study. “Mothers in this study experienced mild-to-moderate postpartum depressive symptoms, so low vagal tone could be protective for infants with that kind of environmental exposure.”

Somers is hopeful the findings from this study can lead to more focused interventions for the children who need it most.

“Understanding how different caregiving environments affect the development of a child and the different ways a child might respond to their environment can help improve or create personalized interventions for children from high-risk populations,” she said.

Tracy Spinrad, professor in the T. Denny Sanford School of Social and Family Dynamics, and Keith Crnic, Foundation Professor of psychology, also contributed to the study.

We learn the basics of hearing — sound waves, ear parts, and the effects of pitch and volume — sometime around third grade, but there are still mysteries to unravel, including how we process where sounds are located, especially if there are a lot of different sounds at one time, or how we handle sounds that are moving.William Yost has spent almost 40 years trying to solve those mysteries.In re...

We learn the basics of hearing — sound waves, ear parts, and the effects of pitch and volume — sometime around third grade, but there are still mysteries to unravel, including how we process where sounds are located, especially if there are a lot of different sounds at one time, or how we handle sounds that are moving. 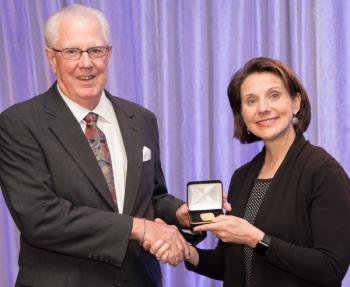 In recognition of this work as well as his service in the hearing and acoustics fields, Yost, a research professor of speech and hearing science in Arizona State University's College of Health Solutions, received the Acoustical Society of America’s (ASA) Gold Medal, the society’s highest honor.

Yost was among the first sound researchers in the late 1980s to describe the brain’s role in perceiving sound when the ear is confronted with many different sounds at the same time. Before then, sound study and hearing science focused mostly on the basic attributes of sound, such as pitch, loudness and sound quality, but Yost’s research showed that it is actually the brain and ear working together which determines how people hear in complex environments. Termed “auditory scene analysis,” this discovery has had important implications for how cochlear implant patients and hearing aid users process sound.

Since joining ASU in 2007, Yost has continued to build on this research with ongoing study of what is known as “sound source localization,” or how a person locates sound if both the sound and the listener are moving.

“Since being at ASU, I have realized that in the real world where sound sources and listeners move, the brain has even more challenges in determining sound source location,” Yost said. “How does the brain know where a sound source is if it moves as compared to when it and/or the listener moves? We can’t answer that question yet, but we’re getting close to an answer.”

Yost’s research embodies ASU’s spirit of innovation, said Michael Dorman, professor emeritus of speech and hearing science, and a colleague of Yost’s who collaborated with him on more than a dozen publications involving sound source localization and cochlear implants.

“Bill’s basic science work on spatial hearing fits perfectly with ASU’s emphasis on translational research," Dorman said. "Many companies, including those working in virtual reality, have come to him for advice on how we locate sounds both in space and moving through space.”

Google and Apple have used some of Yost’s work in developing their sound-related products, and Oculus VR, manufacturer of the virtual reality system Rift, is funding Yost’s current research on how to better process sound for use in virtual reality contexts. In addition to technology applications, his research has also informed policies on the protection of marine mammals.

While both Oculus and the National Institute of Health fund Yost’s current research, his work has received continuous funding since 1968 from many agencies including the Air Force Office of Scientific Research, the Environmental Protection Agency and several private foundations and industries.

“Most of us have gaps in our funding,” said Nancy Scherer, professor of speech and hearing science and current program chair. “The fact that Dr. Yost has had continuous funding speaks volumes about how solid his research is.”

Teaching and service are other important components of Yost’s long career. His textbook, "Fundamentals of Hearing: An Introduction," first published in 1977 and now in its fifth edition, is considered a seminal text. He has been a member of almost every professional and scientific organization associated with hearing and sound, including the American Auditory Society and the American Speech Hearing and Language Association, and he served as president of both the Acoustical Society of America and the Association for Research in Otolaryngology.

Yost received the Gold Medal at the ASA’s 175th meeting in May.