Seeking a global health perspective, a group of seven nurses enrolled in the Doctor of Nursing Practice (DNP) program at the College of Nursing and Health Innovation at Arizona State University designed their own clinical residency and language-immersion experience in Guatemala.

“I had been researching doing an immersion for several years and been in contact with Jardín de América, a total-immersion Spanish school, and it just seemed like the timing was right to be able to do this during school, before I get into my career and don’t really have the time off to do an immersion,” DNP graduate Tanya Carroccio said.

Earning credit for the trip

When they learned about the opportunity, six of her classmates wanted to participate. That’s when Carraccio brought the idea to DNP faculty at the college.

Specifically, she wanted to know if this global health experience and medical volunteer work could be applied toward some of their program’s clinical residency requirements.

The DNP program director and faculty were impressed with the research, thought and effort the students put into making this idea a reality, but there were some practical bridges to cross in order for the group to receive credit for the trip.

“The students were required to outline their objectives for the experience and how it met curriculum and professional goals,” said Diane Nuñez, DNP clinical associate professor.

Once she received the outline from the students, Nuñez said it was clear that the trip would definitely meet the core content requirements of the program.

“These students have, in a sense, designed their own learning immersion through direct engagement with a select population," Nuñez said

With that, the faculty and associate dean approved clinical residency credit for the trip.

With a green light from the college and their individual preceptors, they began tackling the logistics of the trip, which would take them to the remote city of Panajachel, Guatemala, for two weeks in early March.

Thanks to the flexibility of the faculty, they were able to complete assignments ahead of time, allowing them to focus on their clinical work and immersion classes while abroad.

Day-to-day in the clinics

Once on the ground in Guatemala they almost immediately got to work. The seven students split up into three groups in order to volunteer at different clinics.

“Basically from 8 a.m. to noon for two weeks that’s what we did: work in the clinics. The patients were all Spanish-speaking, and they were very grateful to have us there,” said Miller, a DNP graduate and trip participant.

Miller worked at a special-needs clinic seeing patients who have Down syndrome, cerebral palsy and other neurological disabilities.

Another group worked at a public clinic providing vaccinations, diabetes management and other services one might expect to find at a primary-care or urgent-care clinic. The final group volunteered at an orthopedic facility.

“These students have … designed their own learning immersion through direct engagement with a select population."

Because they were working in a high-poverty, rural community, the clinics were at times lacking in supplies. In some cases, basic medical necessities like antibiotics, gloves and even gauze were unavailable.

“Most of the stuff was donations,” Carroccio said. “It gave us a true appreciation for what we have that others may not.”

In fact, the group was so moved by the needs at these facilities they decided to donate as well, buying medical supplies with their own money in order to help out.

Treating patients in the clinical setting was just the first part of their day. After a break to have lunch with their host families, they continued with four hours of Spanish class.

The level of Spanish-speaking and comprehension skills the DNP students had before this experience varied. Some had basic abilities, and others were a bit more advanced.

“It was just amazing, and I feel like I overcame some barriers and I plan to continue learning,” said Simpson, a beginner-level Spanish speaker. Simpson said their starting skill level didn’t matter because the instructors were really good at adapting to each individual’s proficiency and working with them from there.

The language immersion aspect was a key motivator for everyone on this trip.

Because Spanish is a major language in the Southwest, knowing at least some medical terms can make a huge difference when it comes to understanding and communicating with patients they care for here at home.

“When they’re in a dire situation, they’re going to revert to their native language so it’s very, very helpful,” Simpson said. 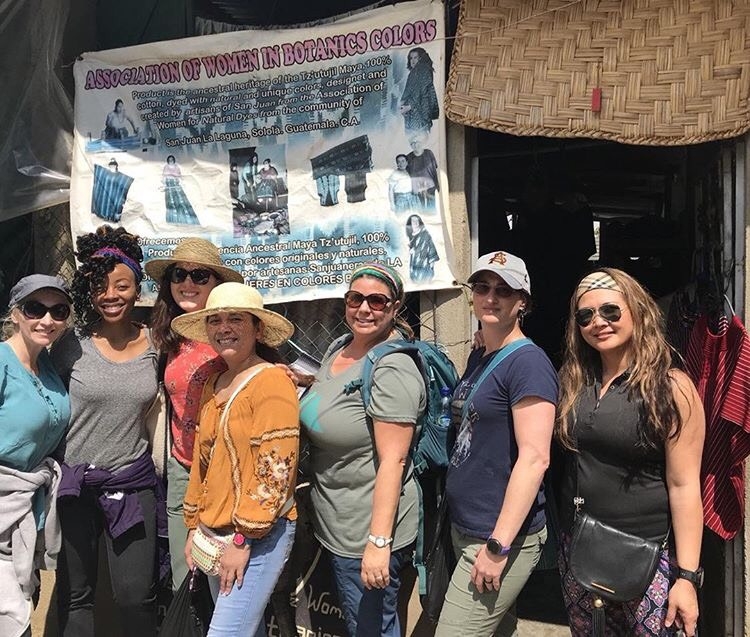 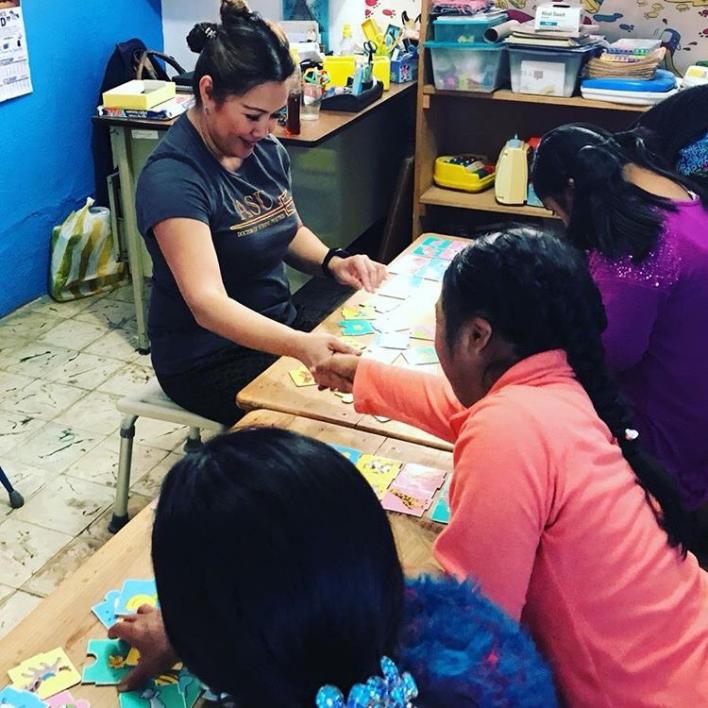 Richelle Miller works with patients in Guatemala in March. Taking in the sights

Volunteering in clinics and improving their Spanish skills was absolutely the focus of the trip, but the group was able to take some time to explore and enjoy the rich Guatemalan culture.

Panajachel is on the north shore of Lake Atitlán and is about 75 miles west of Guatemala City, the country’s capital.

The nurses visited Antigua and one of the nearby volcanoes, months ahead of the deadly eruptions that devastated the area in June.

All of them were in awe of the history and breathtaking beauty surrounding them throughout their time in and around Panajachel.

Each of the women came away from this two-week clinical and immersion program changed and inspired to incorporate the experiences and understanding they gained as a result into their own practice.

“You get to see people as they live, and there’s a lot of value in that, in terms of how you understand them, how you treat them,” Simpson said. “Showing respect for their ideas of what good medical care is and incorporating that into your practices so they feel like they’ve been listened to, respected and receive good care.”

“We fell in love with the people. … The clinic staff, patients, our host families, our instructors at Jardín de América — even the people in the streets, the vendors, we know them by name,” Miller said.

The students encourage future DNP students to think outside the box when it comes to clinical hours and take advantage of the flexibility within the program to pursue a global experience.

For those who don’t want to start from scratch by creating an experience from the ground up, you can always follow in this group’s footsteps with a trip to Guatemala, Carrocio said.

“It takes a little bit of research, but fortunately we have a great foundation because we’ve already been to the school, we know the host family, so we say, just go for it!”

Benigno Canze smiles and extends his hand as a woman approaches his table at a welcome reception held June 22 at the Maricopa County Security Building ballroom in downtown Phoenix.Dressed in a periwinkle blue suit over a vivid orange and navy blue shirt, the Mozambique medical administrator is one of 25 professionals from 17 sub-Saharan African countries attending a six-week training program hoste...

Benigno Canze smiles and extends his hand as a woman approaches his table at a welcome reception held June 22 at the Maricopa County Security Building ballroom in downtown Phoenix.

Dressed in a periwinkle blue suit over a vivid orange and navy blue shirt, the Mozambique medical administrator is one of 25 professionals from 17 sub-Saharan African countries attending a six-week training program hosted by Arizona State University’s College of Public Service and Community Solutions. They’re part of a U.S. Department of State leadership program called the Young African Leaders Initiative or YALI. It was created by former President Barack Obama to help educate the next generation of leaders in Africa. This is the fifth year ASU is hosting YALI fellows. 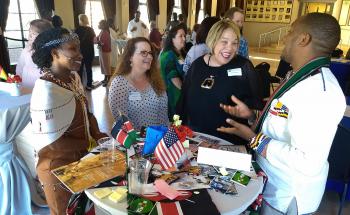 Canze started a nonprofit in Mozambique named Kumbatiro that helps pregnant women and young children receive the medical information and attention they need. He’s hoping to learn what it takes to expand his program to serve more mothers and small children.

“It's painful for me when I see that these small kids are condemned,” Canze said. “Some of them are born HIV-positive because their mothers are not receiving medical assistance. So, I would like to change this.”

“I started training the girls for careers in STEM because there's a huge gap for women in technology for sure, and where I come from girls rarely go to school,” Leparteleg said. “And if they get to school they don't get to go through the mainstream careers. The option they're given is either teaching on nursing.”

Jonathan Koppell, dean of the ASU College of Public Service and Community Solutions, formally welcomed the fellows and community members to the reception.

“Every year, we are blown away by the talent that is brought to us by the Mandela Washington Program,” he said. 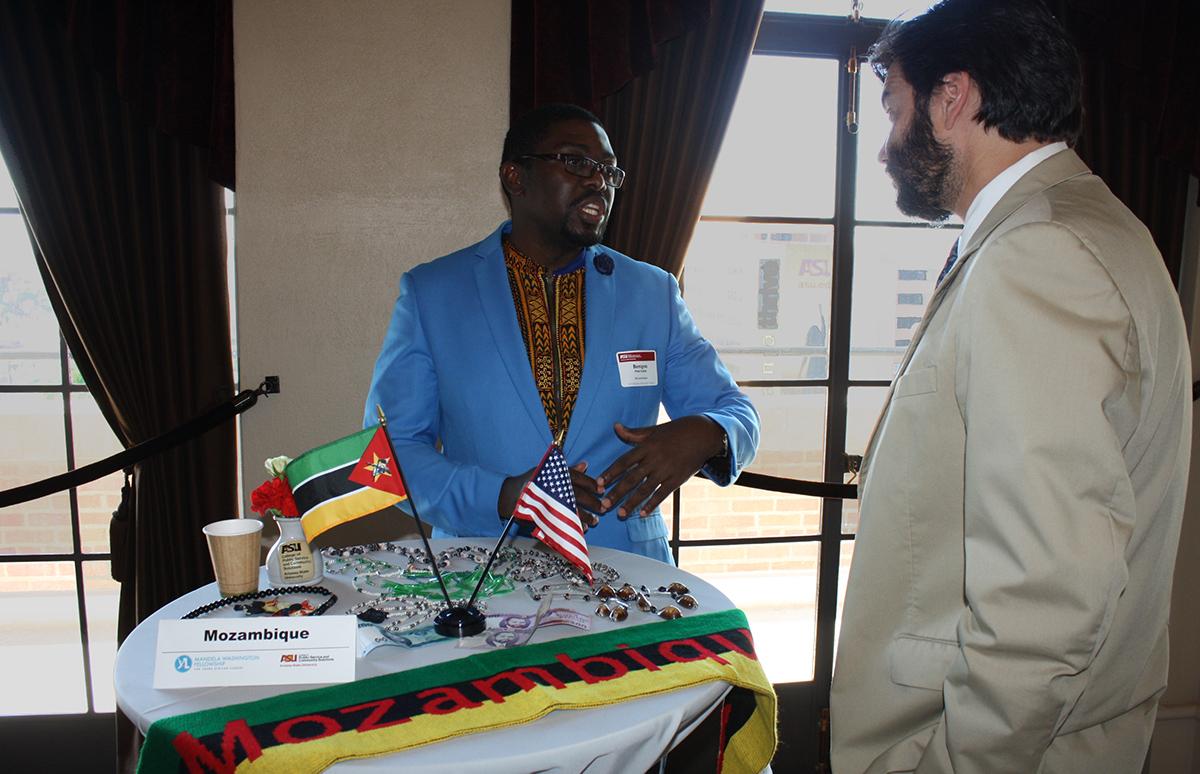 Benigno Canze of Mozambique talks to Jonathan Koppell, dean of the College of Public Service and Community Solutions, at a reception held for the 2018 Mandela Washington Fellows in downtown Phoenix.

Koppell explained that while the young African leaders travel to Arizona to learn, those who come in contact with them end up learning quite a bit from the fellows.

“When we tell people about this program, we always want to make clear that this isn't a group of visiting students,” Koppell said. “These are highly accomplished professionals who have done things in circumstances that we would view as an impossible set of challenges and need to be recognized as such.”

The event is the first opportunity for the 25 young African leaders to meet local professionals, college staff and instructors from the Bob Ramsey Executive Education program in the School of Public Affairs. Over the next six weeks, the fellows will learn how to be effective public managers and leaders through a series of lectures, workshops and visits to governmental and nonprofit organizations throughout the state. Mandela Washington Fellows are assigned community mentors to advise them and are introduced to people in their field who can help them succeed.

Martin Muganzi was in the first class of fellows to study at ASU in the summer of 2014. He had started an organization in Uganda to address his country’s alarming school dropout rate. Seven in 10 children stop going to school. Muganzi knew what he wanted to do — create vocational and career training — but didn’t know how to accomplish it.

“When I was here I met a number of young Africans very much doing the same thing in their home countries, and they shared a lot of their experiences,” Muganzi said. “And then we met a number of organizations and faculty who had the same kind of experience with the ideas we're trying to implement back in Uganda.” 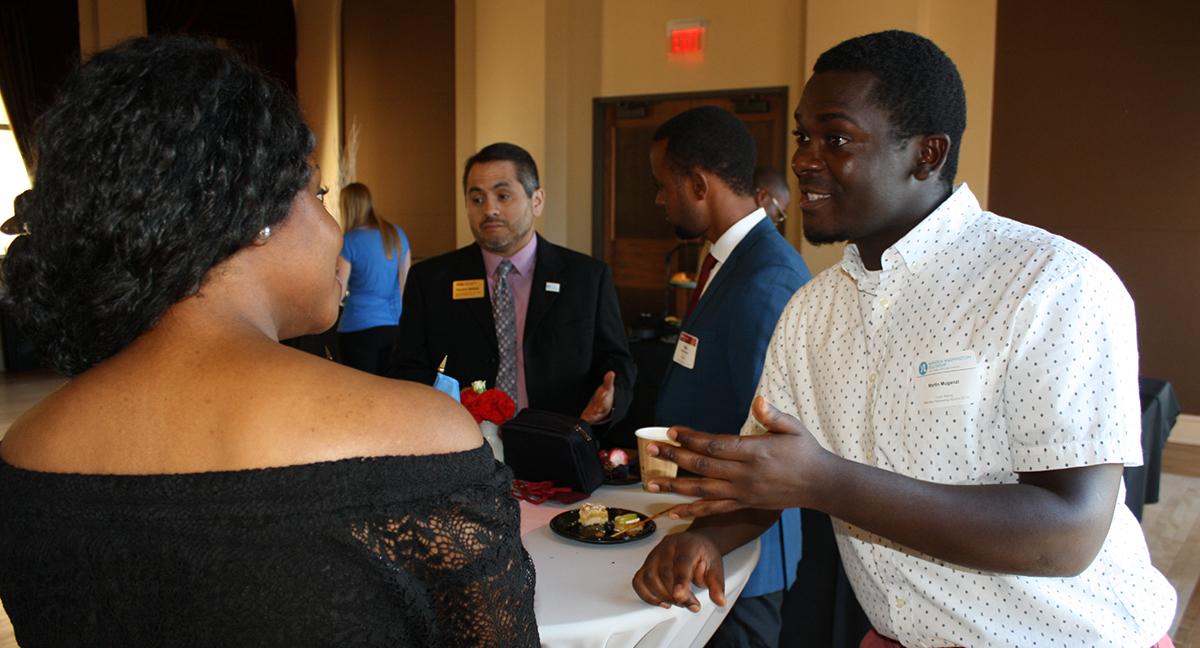 Martin Muganzi of Uganda came to Arizona State University in 2014 as a Mandela Washington Fellow.

He left Arizona confident he could get primary school dropouts to learn a vocational trade and improve their lives. What started as a two-person organization operating out of one center quickly grew after his return.

“Now we have about 30 staff in the space of four years, and we just keep growing,” Muganzi said. ”This opportunity — being a Mandela Washington Fellow — was like a confirmation that you can do this.”

Before they leave, each fellow will develop and present a plan identifying the community need they are addressing and how they plan to tackle it. Before they return home they will spend a week in Washington, D.C., with 700 other fellows who are studying at different American universities.

"Africa has a lot of potential, and I just love the fact that the U.S. is sponsoring this,” Leparteleg said. “It gives us an opportunity to come out of our shells and be the leaders that we want to see our continent get to the next level.”