Dubbed by some as "the strangest star in the universe," the star known as KIC 8462852, Boyajian's Star, or Tabby's Star, is a little hotter than the sun and a bit brighter intrinsically. The star lies almost 1,500 light-years away from Earth in the constellation of Cygnus the Swan. 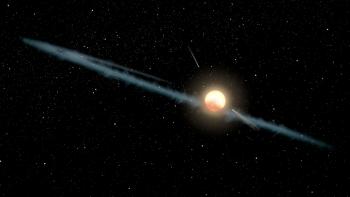 A hypothetical view of the enigma known as Tabby's Star, which dims and brightens in irregular ways that astronomers are still trying to understand. Current models envision the star surrounded by a lumpy ring of dust that lies in our line of sight to it. The star may also have several comets, which is consistent with studies finding evidence for cometary activity within the system. Credit: NASA/JPL-Caltech Download Full Image

Not at all. What makes this star so notable are large changes in its apparent brightness, by up to 20 percent. Moreover, these changes occur at irregular intervals and last days or weeks. In addition, the star also appears to be dimming and brightening steadily over a scale of years.

Citizen scientists using data from the Kepler Space Telescope first discovered brightness dips in 2015. Since then the star has been observed with ground-based telescopes around the world.

"Tabby's Star continues to pose puzzles," said Eva Bodman, a postdoctoral astronomer at Arizona State University's School of Earth and Space Exploration. She recently reported on observations of the star at the American Astronomical Society's summer meeting in Denver.

"Our observations show that the dips that come and go over a few weeks are produced by dust," Bodman said. Dust is likely also the cause of the more gradual changes in brightness, but there's an important difference between the two kinds of dust.

"These new dips were observed at multiple wavelengths and clearly showed deeper dips at blue wavelengths than in red and in the near infrared," Bodman noted. "Larger depths at shorter, bluer wavelengths indicates small-grain dust." 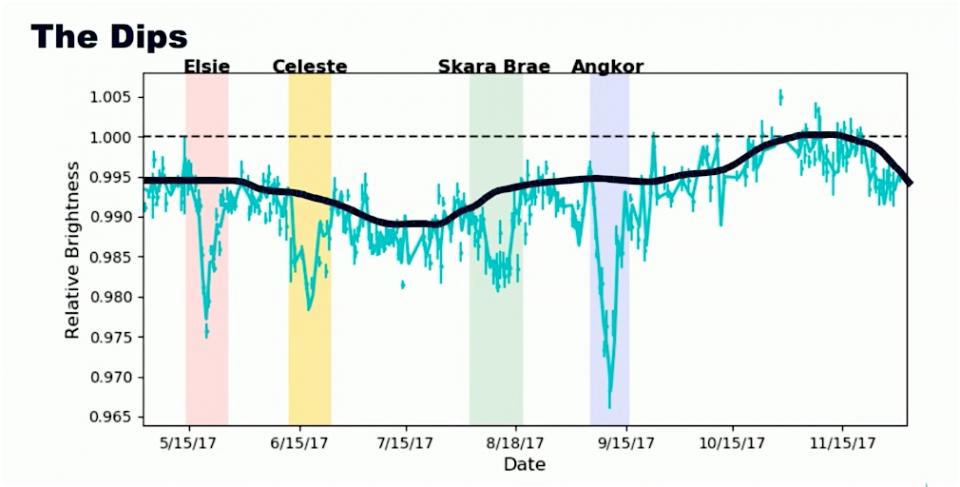 The light curve for Tabby's Star in 2017 displays two kinds of changes in apparent brightness. The highlighted and named parts show brief drops in brightness. But there is also a more gradual change (black line) where the brightness slowly decreases and then returns. Even though these both happen at the same time, the different kinds of brightness changes are caused by different kinds of dust. Credit: Eva Bodman/ASU

That suggests that whatever process is creating these dust particles is going on currently.

As Bodman explained, "The dust is very small — like smoke particles from a campfire — and that means it was created recently. Particles that small get blown out of a star's vicinity in a year or so, driven away by the pressure of starlight."

On the other hand, the dust causing the more gradual brightness changes has a different spectrum which points to larger grains and probably a different origin. However, as with the small dust grains, astronomers are not sure what is producing it.

In the same scientific session as Bodman's presentation was one by two high-school students from the Thacher School in Ojai, California. Their data were collected independently, yet were consistent with the results Bodman found.

So where do these details leave astronomers' picture of Tabby's Star?

"This all suggests that the dust cloud obscuring the star is extremely complex along our line of sight to it," Bodman said. "We're seeing different parts of the dust cloud as they drift in front of the star.

"We need more observations to explain how the dust is being produced and to develop a clear astrophysical picture of what's happening at Tabby's Star."

We all know it takes energy to run a mile, but how much? What about brushing our teeth? Or playing a board game? Or just lying on the couch watching TV? Can we easily find out exactly how much energy and how many calories we’re using for every activity, day or night?Thanks to Barbara Ainsworth, we can.Ainsworth is an Arizona State University Regents’ Professor of exercise science and health pr...

We all know it takes energy to run a mile, but how much? What about brushing our teeth? Or playing a board game? Or just lying on the couch watching TV? Can we easily find out exactly how much energy and how many calories we’re using for every activity, day or night?

Thanks to Barbara Ainsworth, we can. 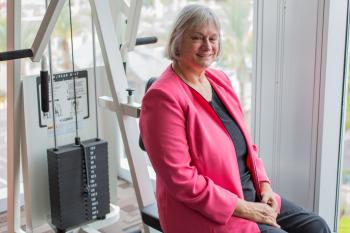 Ainsworth is an Arizona State University Regents’ Professor of exercise science and health promotion at the College of Health Solutions whose seminal work The Compendium of Physical Activities lists the metabolic energy costs, or METs, of physical activities ranging from reading a book to snow mountaineering.

Her work has been cited and consulted for hundreds of articles and research studies, but it represents only one part of Ainsworth’s 40-plus-year career in education, sports medicine and exercise science research. For her lifetime contributions to the field, the American College of Sports Medicine is awarding Ainsworth its highest accolade, the 2018 ACMS Honor Award.

The Compendium of Physical Activities

The compendium was first published in 1993 when Ainsworth was an assistant professor at the University of North Carolina-Chapel Hill. Before she joined ASU in 2006, the compendium had gone through a second edition, and she did much of the work for the third edition at the labs on ASU’s Polytechnic campus, recruiting graduate students and fellow researchers to help fill in gaps and measure energy expenditure for areas that had never been studied, such as child care.

Jesse Vezina, a graduate of the master’s program in exercise and wellness and now a lecturer in the exercise science and health promotion program at the College of Health Solutions, was one of the student researchers who helped gather data for the compendium’s latest edition, bringing volunteers to the lab, hooking them up to oxygen-measuring devices and having them perform child care activities like feeding a baby or pushing a stroller using mannequins of the correct size and weight for accuracy.

He also worked on measuring energy costs of resistance exercises like push-ups and lunges as part of his master’s thesis, and, when Procter & Gamble heard about the compendium, the company had Ainsworth and her students do the same measurements for household cleaning.

“We had subjects come in and mop a dirty floor, clean a bathtub, and do other chores while we measured their energy expenditure,” Vezina said.

With the help of her ASU students and colleagues, the latest edition of the compendium was published in 2011. While the compendium established Ainsworth’s reputation when it was first published 25 years ago, it has been her prolific research collaborations and publications since then that continue to earn her international acclaim. She has published more than 300 journal articles and has participated in numerous studies that further our knowledge about women’s and public health issues.

When she began her career in the 1970s, the profound negative effect that sedentary living and poor nutrition have on health was just beginning to be understood, and Ainsworth saw that every aspect of physical activity could affect health, especially for women.

“Women are typically classified as not active because they don’t do lots of sports and recreation-type of activity,” she said.

By emphasizing every form of physical activity, she has been able to show the important connections between physical activity, public policy and women’s health. Her research interests have fueled many projects, from collaborating on a study of postpregnancy Hispanic women in a walking support group, to her current work evaluating motor skills of women in middle age and older as an indicator of successful aging.

“Assessing physical activity is like putting a puzzle together,” she said in a 2014 ASU Now video soon after she earned her Regents’ Professor distinction. “It’s very exciting. It just never gets old.”

Her excitement about her work has elevated wellness in relevance and importance worldwide, said Pamela Swan, associate professor in nutrition and health promotion at the College of Health Solutions.

“She is the best, most incredible advocate of our program and what we aspire to do as part of the health model," Swan said. "It’s been good to have her involved with all our programs because she can see things from a national and global perspective."

The American College of Sports Medicine presented Barbara Ainsworth with its highest accolade, the 2018 ACMS Honor Award for her lifetime achievements, at its annual meeting in June 2018.