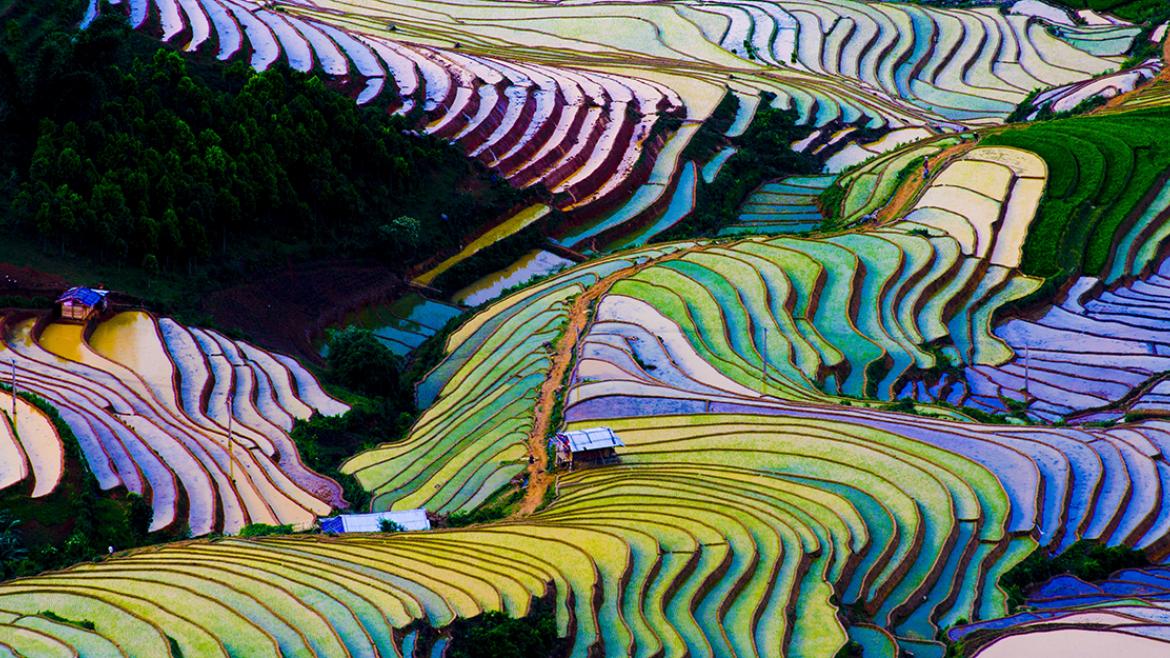 Half of the world’s stomachs, particularly in Asia, sub-Saharan Africa, Latin America and the Caribbean, depend heavily on one staple food crop: rice.

Although rice is one of the world’s most important crops, it is also one of the most water-intensive. For centuries, farmers have grown rice by flooding fields with fresh water, requiring more than two times the water needed for wheat or maize. We use a third of the world’s freshwater resources just to cultivate rice.

Climate change isn’t just threatening wildlife and melting ice caps — by threatening rice production, it may be responsible for more empty stomachs. These empty stomachs, in turn, threaten political regimes. There is growing evidence to show that several conflicts have roots in food crises.

The flooding method may also be its own worst enemy. Waterlogged soil in rice paddies creates the perfect home for microbes that release methane, a greenhouse gas more potent than carbon dioxide in trapping heat. By contributing 20 percent of the world’s manmade methane emissions, rice production helps drive climate change, which then threatens the water supply that sustains it.

“We have all these challenges associated with rice production — it’s a major water consumer, and it’s a major greenhouse-gas emitter,” Aggarwal said. “But it’s the most important staple food in the world, particularly for the poor in the developing world for whom it accounts for more than half the caloric supply. Many cultures depend totally on rice. We can’t just tell people to stop eating rice.”

The flooding technique may be centuries old, but it needs a major transformation to meet growing demand and sustain the environment. But how do you change something so deeply engrained in culture?

Rice is not only an important food source; it is also the main economic activity for millions of rural families throughout Asia and sub-Saharan Africa. In these regions, rice production is dominated by a culture of smallholder farmers. The majority of their rice farms are less than 0.5 hectares in size — less than half the size of a baseball field.

“Mechanization was not able to catch up with what these smallholders demanded. Because their plot of land is very small, you can’t rotate a tractor that plows the field. You use labor,” said Ashok MishraMishra is a senior sustainability scientist at the Julie Ann Wrigley Global Institute of Sustainability and the Kemper and Ethel Marley Foundation Chair in Food Management in the Morrison School. He conducts his research in collaboration with the International Rice Research Institute (IRRI), the International Crop Research Institute for the Semi-Arid Tropics (ICRISAT), the Institute of Economic Growth (IEG) and the National Bank for Agriculture and Rural Development (NABARD)., a professor in the Morrison School of Agribusiness at ASU’s W. P. Carey School of Business.

For centuries, the use of manual labor over mechanization has kept rice farms small in size. Now, central policies in Vietnam keep farm sizes limited, and rapid urbanization in India, Bangladesh, Sri Lanka and China is leaving less land available for agriculture. Combined, these pressures leave rice production largely in the hands of smaller family farms. For these millions of rural families, rice is their bread and butter.

Mishra studies how climate change impacts farmers’ incomes and livelihoods in various rice-growing regions of the world. In the Mekong Delta of Vietnam, for example, rising sea levels are pushing saltwater into the lowlands, where most of the rice is cultivated. The high salinity of the seawater-logged soil makes rice difficult to farm, and many farmers can no longer make enough profit.

“Your choices are either to change your production habits or change your financial portfolio, by abandoning farming and switching to an urban job,” Mishra said.

Mishra found that farm operators are more likely to adjust their production habits. Some rent land on higher grounds, but these lands are expensive and are not as suitable for rice cultivation as the lowlands once were. Often the farmers will harvest little more than enough rice to feed their families, selling whatever they have left to make a living.

Farm spouses, on the other hand, prefer the strategy of diversifying the financial portfolio. However, if farmers are abandoning their fields for urban jobs, then who will be left to produce the rice? The shift from agriculture jobs to urban professions will put an even greater pressure on food security.

In either case, both food production and farmer livelihoods are at risk.

“If you measure sustainability in terms of the incomes of farm families, then rice agriculture is not sustainable because you don’t have the land allocation you need to grow your rice. And if you don’t have the income, then as a family you do not have the purchasing power to buy your food,” said Mishra, who published his study in the International Journal of Climate Change Strategies and Management.

Transforming rice production at its roots

Researchers have proposed a number of technical solutions to produce rice more sustainably. Some have tried alternative wetting and drying, in which fields rotate between flooded and dried periods rather than flooding for the entire planting season. Others look to the System of Rice Intensification, in which young seedlings grow in moist soil rather than flooded soil.

While new rice production methods might save water, they are not truly sustainable unless they can still feed the billions of people who depend on rice. Most governments are hesitant to promote water-saving methods at the expense of lowering yields.

Aggarwal is looking to transform the rice production process through a solar-powered drip irrigation technology developed by her partner Jain Irrigation. The technology drips water slowly and directly into the rice plant’s roots, applying water in more precise amounts at strategic times rather than flooding the field entirely.

Without the flooded soil, methane-producing microbes cannot proliferate as easily, leading to reduced methane emissions. The process also reduces water consumption by 20 to 60 percent while increasing yields by 25 to 50 percent, Aggarwal said, making rice production more sustainable for both the environment and food security.

Aggarwal’s plan is to start the project in a small region, then scale it up gradually.

“From a sustainability perspective, we are realizing that we are dealing with highly complex systems, of which we know very little. In the past, we tried many technologies, such as the Green Revolution technologies, in which governments introduced a technology in a top-down solution, with several unintended consequences over the long term,” Aggarwal said.

“Now we are realizing that it is important to engage local people as co-designers of the process of change and bring their knowledge and values to the science and technology we are developing. Also, given all the uncertainties, instead of imposing one big change, you have to do many small experiments on the ground with real people, learn from it and adapt.”

Implementing change from the ground up

Cultures have spent thousands of years shaping their systems and designing their infrastructure based on the traditional flooding technique, making change difficult. Rice terraces in many Asian countries, for example, organize fields in successive platforms down a mountainside. As farmers release water from the top of the mountain, the top field will flood first, then the excess water will flow down to flood the next field, then the next, all the way down the mountain.

“The problem is that a single individual cannot do this alone. The entire system needs to be changed,” Aggarwal said.

For this change to happen, you have to begin by providing farmers the right incentives, Aggarwal said. Currently, farmers in many parts of the world receive highly subsidized water and energy, and they don’t pay for their greenhouse gas emissions. As a result, they don’t have much motivation to change.

“You have to remember that, when it comes to food, nobody wants to take any risks,” Aggarwal said. “Particularly in parts of Asia and Africa, rice is a major part of people’s everyday diet and culture. When it comes to rice, they are highly risk averse, and they would rather err on the safe side. If everybody thinks that way, then it’s hard to make change.”

Much like the drip irrigation method, Aggarwal’s plan is to change rice production at the roots, communicating with farmers and implementing technology from the ground up.

She is partnering with local agriculture universities and nongovernmental organizations that regularly interact with farmers and understand local culture. With their cooperation, she plans to set up demonstration farms and dynamic learning centers that provide safe spaces for farmers and researchers to experiment with different technologies in a local setting.

“You need to engage the community and mobilize it for change. We are looking at the human side of the technology,” Aggarwal said.

Mishra agrees that community engagement is key. When investigating farmer perceptions in eastern Uttar Pradesh, India, he found that while the farmers may be aware of long-term changes in weather patterns, they often do not associate them with climate change.

“When you ask the farmers, ‘Do you know what climate change is?’ they don’t know. But when you ask, ‘Have you seen an increase in the number of dry days?’ or ‘Is the rainfall coming later and later on in the year?’ they say yes to all of these questions,” Mishra said. “They need to be educated that what they are observing is climate change, and we need to teach them how to adapt.”

Aggarwal and Mishra are both inspired by ASU’s culture of multidisciplinary, impact-driven research.

“At ASU we work collaboratively on use-inspired projects and examine their social impacts,” Aggarwal said. “This kind of change is not just about the technology. You need to form effective teams that include people who understand culture, ecology, engineering, law, politics and communication, because you need to move beyond discipline-bound science to find solutions and communicate with farmers. I’m not an expert in all of these fields — my training was in economics. The multidisciplinary culture at ASU shaped my ideas for this work. That is what I really like — having a team of people to work with and learn from.”

Top photo: Mu Cang Chai is a rural district of Yen Bai province in northern Vietnam where there are many terraced rice fields, creating amazing landscapes that stretch down the mountainsides. Photo courtesy of Digital Office Pro

SAN FRANCISCO – The Sun Devil women's track and field program landed seven women on the Pac-12 First-Team All-Academic list to lead the conference, and Grant Sisserson earned a first-team honor on the men's side, the conference announced Thursday. ... SAN FRANCISCO – The Sun Devil women's track and field program landed seven women on the Pac-12 First-Team All-Academic list to lead the conference, and Grant Sisserson earned a first-team honor on the men's side, the conference announced Thursday.