Experts gathered May 16–17 in Baton Rouge, Louisiana to discuss sustainability issues affecting cities in the I-10 corridor

Journalists who report on major environmental issues — climate change, excess water and drought — often struggle to find effective ways to connect their stories to the public.

The challenge is to “make it seem immediate for people,” said Michael Kimmelman, architecture critic for the New York Times, who often writes about climate change from the perspective of different cities around the world. “It’s easy to describe the calamities. The harder thing is to explain to people why doing a resilient thing is going to produce better results … or the long-range issues of sea rise or drought.”

Kimmelman was speaking at the inaugural Ten Across (10X) Water Summit in Baton Rouge, Louisiana, a two-day collection of conversations to explore the impact of water on a region that stretches 2,400 miles along the Interstate 10 corridor from Los Angeles to Jacksonville, Florida. The summit was hosted by Arizona State University and The Water Institute of the Gulf in partnership with The Baton Rouge Area Foundation, the city of Baton Rouge, and the city of Phoenix. Speakers included former mayor of San Antonio and U.S. Housing and Urban Development Secretary Henry Cisneros, and chief resilience officers from Paris, Mexico City, and major metro areas along I-10.

Kimmelman was a member of a panel of journalists who tackle environmental subjects, along with National Public Radio national correspondent Debbie Elliott, ProPublica senior environmental reporter Abrahm Lustgarten, and moderator Tracy Wahl, the executive editor of Elemental: Covering Sustainability at ASU. Their topic: “Changing the Narrative.”

“If we can’t tell a story through the voices of people who’ve been impacted, then there is no story,” Elliott said. “The only way we can build trust and help understand each other is to tell stories through people.”

Describing the realities of climate change is one thing, but motivating people to make change can be much tougher. Lustgarten talked about changing comfortable patterns and habits.

“What we’re doing as members of the media or as policymakers is fighting inertia,” he said. “(We're) trying to show people and raise awareness of different choices and sacrifices essentially, whether that’s leaving your home or abandoning a community or giving up a fast car for an electric car or using less water.”

While water is the first subject for the Ten Across project, other major points of focus include energy, human migration, urban development and global commerce. By connecting cities and leaders that deal with extreme coastal and desert conditions, they can explore such common challenges as long-term resilience, multi-jurisdictional policy issues, data-rich forecasting and visualization, and navigating environmental, economic and societal adjustments.

Wellington “Duke” Reiter, executive director of ASU’s University City Exchange, is an originator of the Ten Across project.

“It’s our belief that the future is arriving early, in many senses, in the I-10 corridor," Reiter said. "With closer observation in this area, one can see the critical issues of our time registering in both the built and natural environments. We’ve developed Ten Across to assemble this evidence in a compelling and coherent format, so as to inspire the necessary responses.”

If you could start any project right now, what would it be? Would you create something functional like a piece of furniture or finally tackle that home improvement project you’ve been putting off? Would you develop a revolutionary invention to solve one of the world’s biggest problems? Or would you spring for creating something wilder, say … a 20-foot tall, fire-breathing dragon with moving ...

If you could start any project right now, what would it be? Would you create something functional like a piece of furniture or finally tackle that home improvement project you’ve been putting off? Would you develop a revolutionary invention to solve one of the world’s biggest problems? Or would you spring for creating something wilder, say … a 20-foot tall, fire-breathing dragon with moving wings?

According to Steven Weiner, a doctoral student in Arizona State University's School for the Future of Innovation in Society, all of these kinds of ideas are conducive to learning important skills that can help us thrive in the real world. 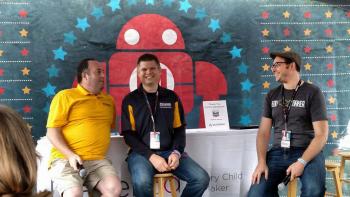 From left: Faculty members Micah Lande and Shawn Jordan join Steven Weiner in a panel discussion at at the 2016 World Maker Faire in New York.

The maker movement is a broad term that encompasses engineers, scientists, inventors, designers, artists and more, who share a passion for independent creation and development.

Weiner was working as a physics teacher when he first learned of the maker movement through a podcast he had been listening to during his commute.

“It was like a lightning bolt moment,” he said. “They were talking about encouraging students to have authentic, meaningful interactions with hands-on activities. And not just things like pushing buttons or turning levers like a lot of science centers do, but actually making things and breaking things and getting to understand how things work on a very visceral level.”

For Weiner, the news couldn’t have come at a better time. Teaching had become frustrating, as he felt he was pushing students to learn things they didn’t want to learn — or at least, that they thought they didn’t want to learn due to the rigid nature of the education model in schools. But in discovering the maker movement, he realized that his true passion lies in inspiring learning through creativity and innovation.

So when he learned that the Arizona Science Center was planning to install a makerspace in the former Phoenix Museum of History building, he jumped on the opportunity to get involved.

“When I came in, it was just an idea, but I had a very clear vision of what it could be. I wanted a community space where people young and old could come in and learn how to make things,” he said. 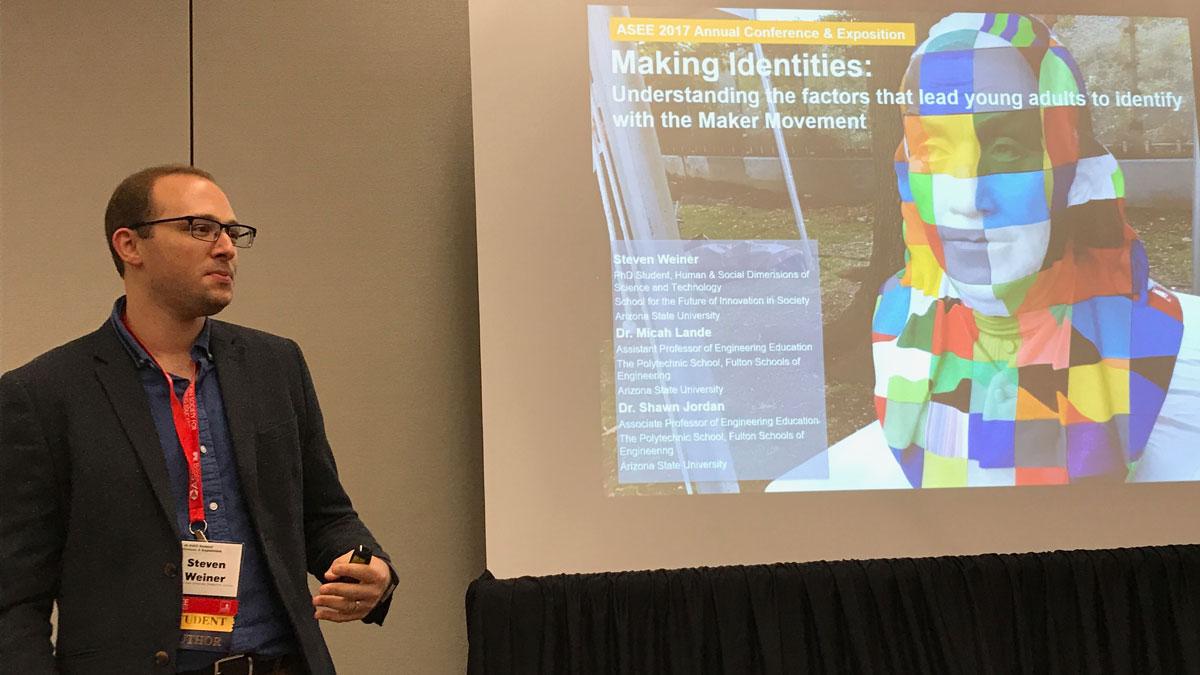 Steven Weiner left teaching science in traditional ways behind when he discovered learning through makerspaces.

The space was revolutionary in that it wasn’t an exhibit or permanent display of ideas, but a place where people could come and use machines like laser cutters, 3D printers and woodcutting tools to design and create almost anything they could imagine.

“It was overwhelming having all of this responsibility and creative freedom, but also very exciting. I went from being a high school teacher working with these young kids, which I loved, to going on to having this very high-stakes role with $1.5 million on the line and working with architects and deadlines,” Weiner said with a chuckle.

Weiner’s visions helped shape what is known today as the CREATE Makerspace at the Arizona Science Center.

His plans for expanding the maker education platform didn’t stop there. He decided he wanted to go back to school to get his PhD in Human and Social Dimensions of Science and Technology from ASU so that he could fully immerse himself in maker research. His goal: find out what makes makerspaces successful, and how that could translate to formal learning environments.

“It occurs to me more and more that the communities are the most important thing," Weiner said. "It’s not just about these technologies, its about the people who are interested in sharing their ideas, working with others, collaborating, iterating, failing together and ultimately getting each other excited about learning.”

To fuel this dream, he applied for the National Science Foundation Graduate Research Fellowship, which provides an annual stipend of $34,000 as well as $12,000 in tuition coverage. The letter of recommendation written by his mentors, Micah Lande and Shawn Jordan of the The Polytechnic School, one of the Ira A. Fulton Schools of Engineering at Arizona State University, described Steven as “a young researcher who brings intellectual excellence and curiosity, an experienced perspective grounded in student-centered learning and the practice of teaching STEM and making, and a passion for impacting the future of STEM education.”

Weiner is clearly excited to dive headfirst into this opportunity.

“My plan is to look at bringing maker education into institutions like schools and even museums and libraries and examining how these things are being affected or are affecting school or organization cultures,” he said.

However, Weiner noted that before that can happen, something needs to be changed in how institutions go about installing maker education and makerspaces.

“There’s a fear that the maker movement is just a fad, that there’s no cultural buy-in, so these makerspaces aren’t lasting long,” he said, “It’s very exciting to come in and look at the technology, but those things are not enough to sustain the culture that we see in authentic grassroots maker communities. I want to look at these successful communities and find out what makes them sustainable and bring that into schools.”

Written by Madelyn Nelson, marketing intern for the School for the Future of Innovation in Society