Arizona State University and Hiroshima University in Japan have entered into an agreement that will promote academic exchange and develop joint research and educational programs. The recently signed MOU envisages expanding university partnerships and increasing student and researcher exchanges between the two universities.

The ASU-Hiroshima focus initially has been on research collaborations on topics like smart cities, aging and governance of new technologies.

“As global universities that seek to find solutions for complex challenges and foster future generations of changemakers, ASU and Hiroshima University are ideal partners to facilitate knowledge creation and collaborations that advance these goals,” Panchanathan said. “We hope to bring together our students and researchers in an exchange of innovative ideas that have a positive impact in our respective nations as well as in communities across the world.”

With schools back in session after the #RedforEd teacher walkout, and summer vacation just a few days away in most districts, the intensity of the Arizona education movement has relaxed into a steady hum of hope for the future and a grateful sigh for the respite of summer break.On May 1, during the heat of the #RedforEd campaign, Eileen Borris of Arizona State University's Thunderbird School of Gl...

During the heat of the #RedforEd campaign, ASU's Thunderbird School of Global Management facilitated a dialogue with Arizona women’s groups

With schools back in session after the #RedforEd teacher walkout, and summer vacation just a few days away in most districts, the intensity of the Arizona education movement has relaxed into a steady hum of hope for the future and a grateful sigh for the respite of summer break.

On May 1, during the heat of the #RedforEd campaign, Eileen Borris of Arizona State University's Thunderbird School of Global Management facilitated a dialogue, sponsored by Athena Valley of the Sun, that was a collaborative effort of Arizona women’s groups concerned about the future of education in Arizona. 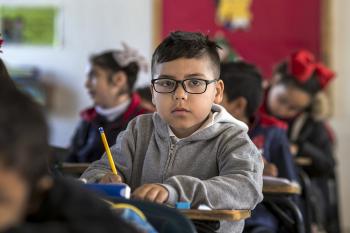 The goal of the dialogue was to discover the opportunities and apprehensions people have concerning what is happening to the education system in Arizona. Borris, a licensed psychologist and expert in peacebuilding and political forgiveness, was called on to help members of the community express their feelings on this very controversial issue and share their perceptions of the problems that affect the future of education in Arizona. The purpose was not to come to a consensus of agreement nor to determine which viewpoint was “right.” Rather, it was to discover the richness of diverse perceptions that emerge from group discussion and create a shared meaning through inquiry and reflection.

“I wanted to make sure everyone in the room felt safe, had a voice and listened deeply to one another,” Borris said. “It was important that everyone learned something new, something they never thought about before. There is a big difference between a debate and a dialogue — and with this dialogue, the participants really heard one another and were affected by one another in a very positive way.”

The dialogue was as diverse as the participants who attended. People agreed that the issue about how to restore funding and improve education in Arizona was more complex than they thought. Some felt there was a lack of inclusiveness in solving the issue, while others felt that a lack of respect for the teaching profession was why more was not being done. Concerns were also expressed about retaining and developing passionate teachers when, under the current paradigm, teachers and schools are not being supported financially and otherwise. Participants called for strong leadership who demonstrate passion and vision that can drive change.

Dialogue participants also discussed several systemic issues which impact education, such as the economic future of the state, housing, poverty and the need to look at the situation holistically. The greatest concern raised was that individuals who need education the most are being left behind.

“I was very touched by the care and commitment around the room — and that it wasn’t just teachers speaking,” Borris said. “The dialogue involved concerned citizens from all walks of life.”

The group spent a great deal of time focusing on the issues of finance, as well as the fact that there are no businesses supporting education and there is a constant fight every year for funds. Participants agreed that there was a substantial need for more transparency involving budgets, goals and funding. What people said  they were are really hoping for is a more inclusive and positive political experience between politicians and educators, particularly so that teachers wouldn’t have to work multiple jobs to stay in the classroom.

The participants also wanted to see psychologically safe environments for learning where no child is lost to violence. They hoped that businesses would step up and adopt a school or take up other kinds of partnering with public schools to make them a better place for learning. The overall hope was that the classroom would produce lifelong learners so, as they grow into adults, children’s learning would continue to grow beyond the classroom.

“The question is, do we want to pay now or later,” Borris said. “Our society is changing and the needs of our children and youth have changed. Schools are not keeping up with the social, behavioral and technological changes taking place — and this is hurting the educational system. Our youth are incredibly important; they are our future and we need to invest in them. If we don’t invest in them now, our society will have a higher price to pay later.”