Tempe campus
New study: In the sun, car interiors can reach deadly temps in about an hour.
May 24, 2018

A lot can happen at 160 degrees Fahrenheit: Eggs fry, salmonella bacteria dies, and human skin will suffer third-degree burns. If a car is parked in the sun on a hot summer day, its dashboard can hit about 160 degrees in about an hour. One hour is also about how long it can take for a young child trapped in a car to suffer heat injury or even die from hyperthermia.

Researchers from Arizona State University and the University of California at San Diego School of Medicine have completed a study to compare how different types of cars warm up on hot days when exposed to different amounts of shade and sunlight for different periods of time. The research team also took into account how these differences would affect the body temperature of a hypothetical 2-year-old child left in a vehicle on a hot day. Their study was published today in the journal Temperature.

“Our study not only quantifies temperature differences inside vehicles parked in the shade and the sun, but it also makes clear that even parking a vehicle in the shade can be lethal to a small child,” said Nancy Selover, a climatologist and research professor in ASU’s School of Geographical Sciences and Urban Planning.

From January through May 2018, six children died after being left in hot cars in the United States. That number will go up. Annually in the U.S., an average of 37 children left in hot cars die from complications of hyperthermia — when the body warms to above 104 degrees and cannot cool down. More than 50 percent of cases of a child dying in a hot car involve a parent or caregiver who forgot the child in the car.

“These tests replicated what might happen during a shopping trip,” Selover said. “We wanted to know what the interior of each vehicle would be like after one hour, about the amount of time it would take to get groceries. I knew the temperatures would be hot, but I was surprised by the surface temperatures.”

The different types of vehicles tested warmed up at different rates, with the economy car warming faster than the midsize sedan and minivan.

“We’ve all gone back to our cars on hot days and have been barely able to touch the steering wheel,” Selover said. “But imagine what that would be like to a child trapped in a car seat. And once you introduce a person into these hot cars, they are exhaling humidity into the air. When there is more humidity in the air, a person can’t cool down by sweating because sweat won’t evaporate as quickly.” 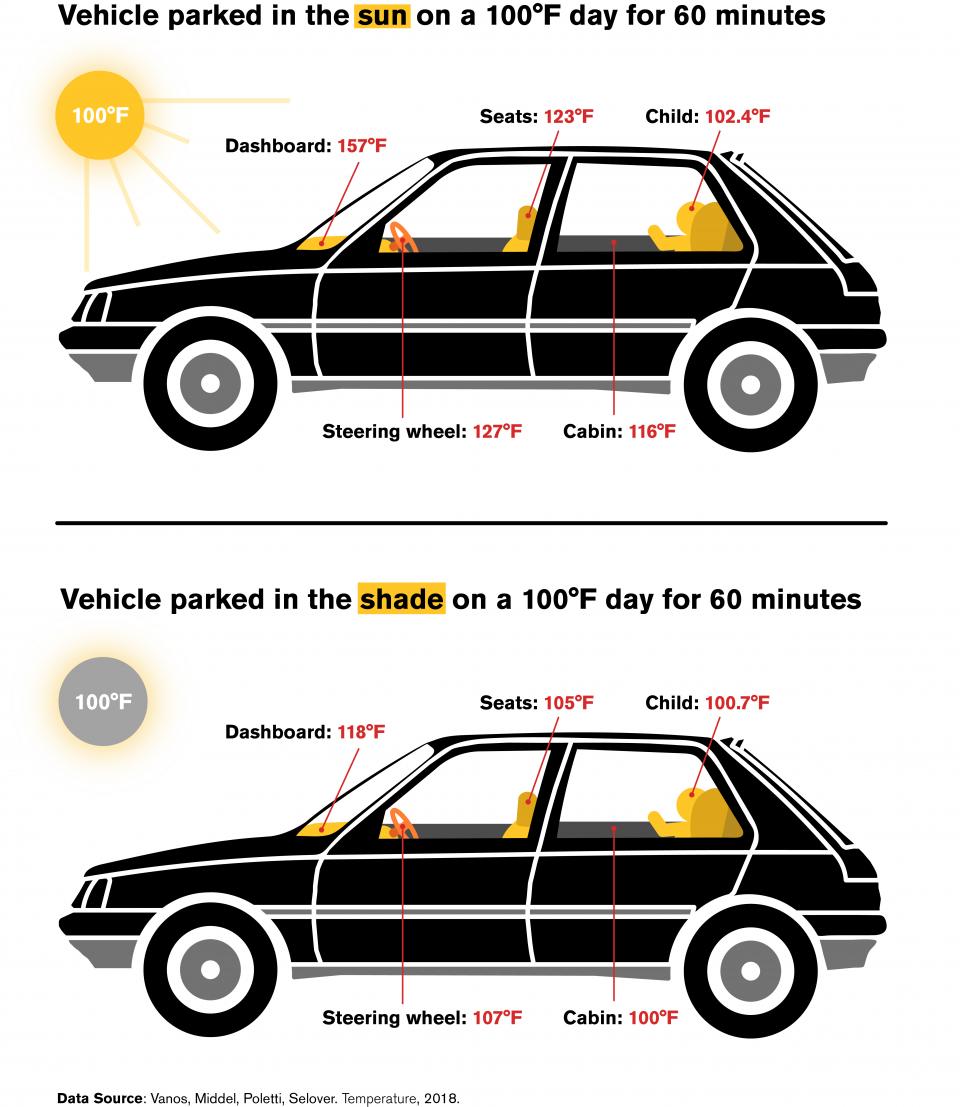 A person’s age, weight, existing health problems and other factors, including clothing, will affect how and when heat becomes deadly. Scientists can’t predict exactly when a child will suffer a heatstroke, but most cases involve a child’s core body temperature rising above 104 degrees for an extended period.

“We hope these findings can be leveraged for the awareness and prevention of pediatric vehicular heatstroke and the creation and adoption of in-vehicle technology to alert parents of forgotten children,” said Jennifer Vanos, lead study author and assistant professor of climate and human health at UC San Diego.

Hyperthermia and heatstroke effects happen along a continuum, Vanos said. Internal injuries can begin at temperatures below 104 degrees, and some heatstroke survivors live with brain and organ damage.

Forgetting a child in the car can happen to anyone, said Gene Brewer, an ASU associate professor of psychology. Brewer, who was not involved in the heat study, researches memory processes and has testified as an expert witness in a court case involving a parent whose child died in a hot car.

Most people spend a lot of time on routine behaviors, doing the same activities over and over without thinking about them. For example, driving the same route to work, taking the children to day care on Tuesdays and Thursdays, or leaving car keys in the same spot every day. When new information comes into those routines, such as a parent’s day care drop-off day suddenly changing or an emergency phone call from a boss on the way to work, that’s when memory failures can occur.

“These cognitive failures have nothing to do with the child,” Brewer said. “The cognitive failure happens because someone’s mind has gone to a new place, and their routine has been disrupted. They are suddenly thinking about new things, and that leads to forgetfulness. Nobody in this world has an infallible memory.”

The Tempe City Council announced Thursday that it will provide $35,000 from the Tempe Innovation Fund to embark on an anonymized monitoring system with Arizona State University scientists that will reveal the presence of opioids, cocaine, alcohol, marijuana and other health-threatening substances in the city’s wastewater. According to Tempe officials, the immediate goal of this new partnership i... 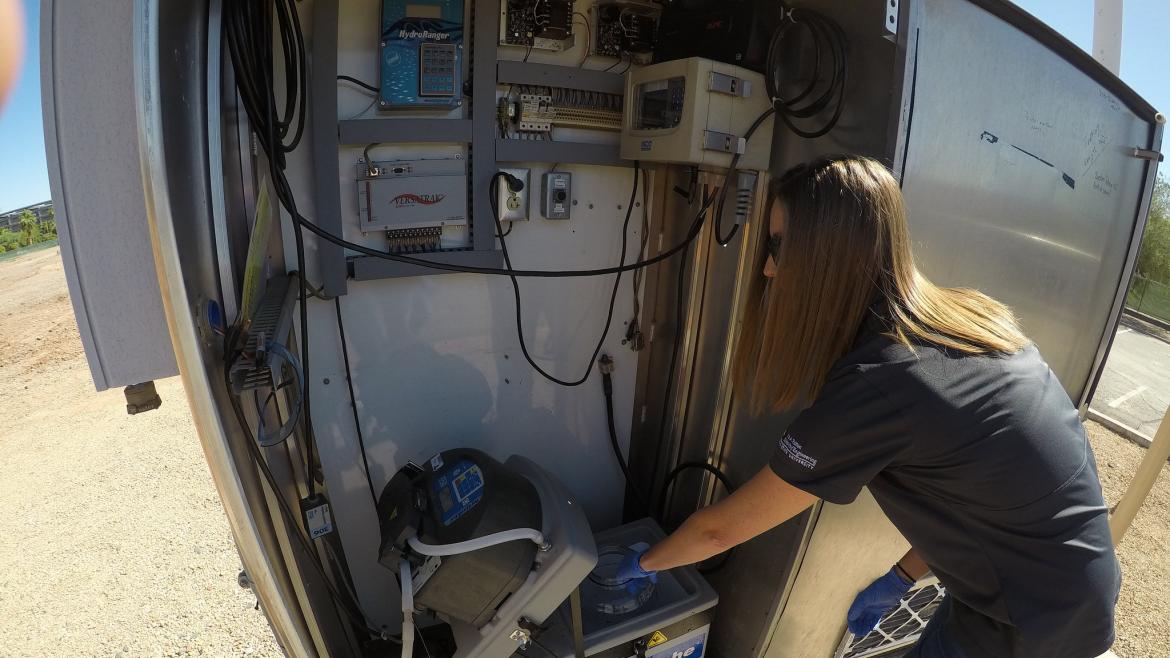 The Tempe City Council announced Thursday that it will provide $35,000 from the Tempe Innovation Fund to embark on an anonymized monitoring system with Arizona State University scientists that will reveal the presence of opioids, cocaine, alcohol, marijuana and other health-threatening substances in the city’s wastewater. According to Tempe officials, the immediate goal of this new partnership is to achieve an end to opioid-related deaths and overdoses. The university will provide matching funds of $35,000.

“Pairing the data from this wastewater program with the opioid map [a dashboard that documents public safety calls where use of opioids is likely] will help us pinpoint where to send the necessary resources to help people overcome addiction,” Tempe City Councilman Joel Navarro said. “This research could help save lives.”

Navarro is a firefighter who has seen the effects of opioid abuse firsthand. He is also chair of the Regional Opioid Action Plan Committee, a group of government representatives, nonprofit agencies, churches and health-care experts.

"With their vote, the city of Tempe has become the de facto thought leader in public health among cities across the United States,” said HaldenHalden is also director of ASU's Biodesign Center for Environmental Health Engineering , a professor in the Ira A. Fulton Schools of Engineering who will lead the effort.

Halden’s technology is being used in more than 300 cities across the world, but the Tempe project will be the first civic-university public health partnership — one in which the researchers and city officials will work together to extract data, review results and work collaboratively to refine the process, and identify and implement effective solutions.

LISTEN: Thought Huddle podcast — ‘We monitor what goes down the drain’

Because samples are taken from sewage lines carrying waste of thousands of people, the samples cannot be linked to any one individual. The anonymity of the process and detected drug types and quantities deliver results that are far more reliable than personal surveys or other methods.

“This is about the health of an entire city,” said Adam Gushgari, postdoctoral research associate in Halden’s Biodesign Center for Environmental Health Engineering. “As public health researchers and professional engineers, we study populations, not individuals. When we draw a sample of city wastewater, it always represents an anonymous composite from typically thousands to even hundreds of thousands of residents, with no way of linking obtained data to any one particular person.” 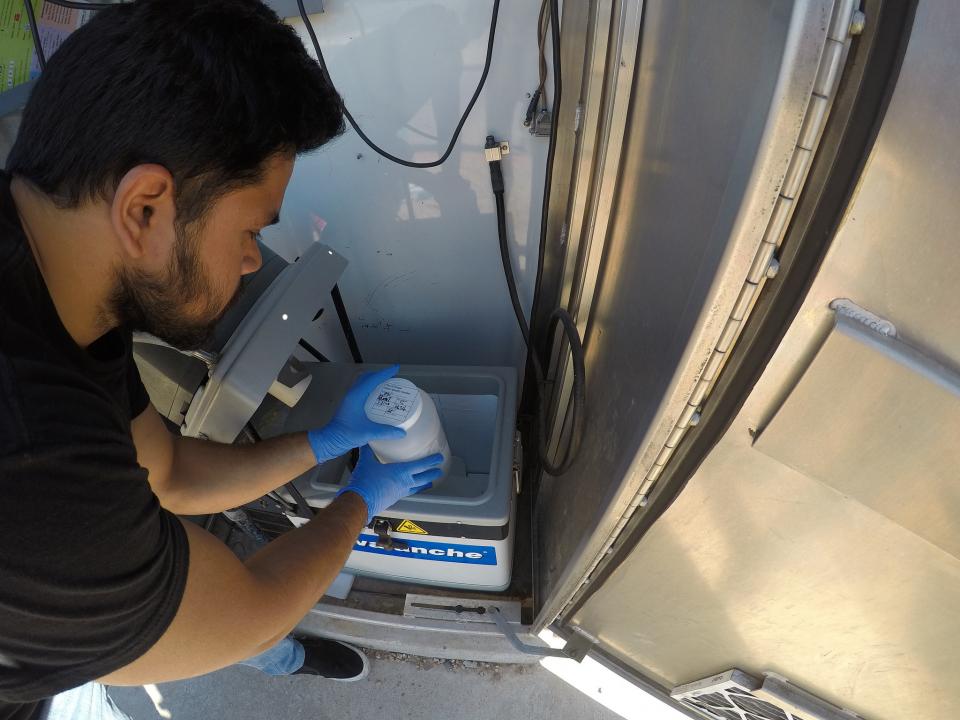 Halden’s Human Health Observatory is the largest archive of wastewater samples worldwide and has been used in the past to change U.S. policy. Halden’s team previously used wastewater and human cohort studies to bring to light the detrimental effects of harmful antimicrobials, such as triclosan and triclocarban. Following his call for national and international legal action, the Food and Drug Administration banned the use of these chemicals in personal-care products last September.

No additional sample collection is necessary for the Tempe project, as city public works staff already follow a regular schedule for compliance monitoring. With his lab on ASU’s Tempe campus, Halden’s team will receive the samples and provide results in near real time. Halden’s process uses tandem mass spectrometry, which can isolate and identify concentrations of specific opioids, including morphine, codeine, oxycodone, heroin and fentanyl. Measured concentrations of opioids are then converted to pounds per day per population to estimate the amount of drugs used in an area, the number of drug abusers and even the number of overdoses.

With the addition of this project, Tempe could emerge as a role model for other cities across Arizona and the U.S. In addition to the new project, in February of this year, the city launched an Opioid Abuse Dashboard, which documents public safety calls where use of opioids is likely.

The wastewater data will be weighed alongside the Arizona Youth Survey’s report, which asks people age 18 and younger whether they use tobacco, alcohol, marijuana or other drugs.

For the 2017–18 fiscal year budget, the city of Tempe established a one-time, non-recurring Innovation Fund of $500,000, designed to encourage and promote new and creative ideas that significantly improve the community and position Tempe as an innovator.