They interviewed an award-winning journalist who had just returned from Syria. They learned how religious conflict ushered in the modern system of states from a political scientist. And they talked with a sociologist of religion who just may have an answer to the problems of polarization in the country.

These are but a few of the experiences of the students honored at Arizona State University's Center for the Study of Religion and Conflict’s annual awards lunch. 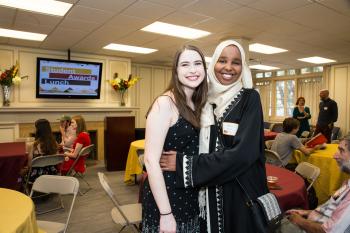 Undergraduate research fellows Maria Dooling (left) and Naruro Hassan at the 2018 Student Awards Lunch hosted by the Center for the Study of Religion and Conflict. Download Full Image

As the sun streamed through the windows of West Hall, parents, friends, faculty and academic advisors gathered May 4 to celebrate a range of student accomplishments: fellows who completed the Undergraduate Research Program; winners of “Friends of the Center” research scholarships; and undergraduates who earned a Certificate in Religion and Conflict.

”We look forward to this event every spring," said John Carlson, the center’s interim director.

"It’s the perfect way to cap off the school year because we are able to recognize and honor the incredible work our students are doing through the Center and to hear firsthand how these programs have impacted their time at ASU.

“Not all research centers at ASU have such vibrant and extensive programs for students,” said Carlson. “But we think these programs are vital to our mission to deepen understanding about religion’s role in various forms of social and political conflict.”

First to be recognized were students who completed the Undergraduate Research Fellows Program. The program is open to students from any major, and this year’s group included students in biomedical engineering, journalism, English, and political science.

Students in the program take a special class with the center’s director, meet with visiting scholars and practitioners, and assist faculty in cutting edge research on the sources and dynamics of religion and conflict.

“The [center] fellows program taught me many things that I was not exposed to in my own field,” said Parker Shea, a journalism and mass communication major who was recognized at the awards ceremony.

“I am walking away with a deeper appreciation for the work scholars do in answering those hard questions about our place in society, in this nation, and in the world as it undergoes dramatic changes in terms of global conflict, the role of religion, and movements towards equality,” Shea said.

For English major Naruro Hassan, the impact of the fellowship was also profound.

Students recognized for completing the fellows program this past year:

Friends of the Center Research Awards

The centerpiece of the awards program are the winners of the Friends of the Center research awards. This award confers students — undergraduate and graduate — scholarships of up to $2,500 to pursue independent research on religion and conflict for their theses or dissertations, or to participate in peacebuilding programs overseas.

“The most phenomenal features of all our student programs, not just the research awards, is that they are funded by the generosity of donors, including alumni, staff, and members of the local community,” Carlson said. “We are deeply grateful to these Friends of the Center who are just as committed to the work of the center as we are.”

The center awarded four scholarships this past year. Two of the projects focus on evangelical Christianity.

BrieAnna Frank, a journalism and political science major, will travel to the Middle East to study how Christians living in Israel and the Palestinian territories view support for Israel. This is part of a larger project for her honor’s thesis that will compare these attitudes to those among Christians in the U.S. She got the idea for the project while working with Jason Bruner, assistant professor of religious studies, as an undergraduate research fellow.

The second project focuses on newly emerging progressive Christian groups in the American South, part of Terry Shoemaker’s dissertation research. Shoemaker, a doctoral candidate in religious studies in the School of Historical, Philosophical and Religious Studies, focuses on religious communities and religious shifts within the U.S. for his research, with particular attention to competing forms of Protestant Christianity within the Bible Belt.

Two other projects are concerned with refugees, an issue that is expected to become increasingly important in the next decade due to climate change as well as war.

The first of these projects focuses on the lived experiences of Syrian women refugees in the U.S. Leila Asadi, a doctoral candidate in justice studies in the School of Social Transformation, is particularly interested in how the religious identity of Syrian women refugees shapes their opportunities for socialization within the U.S., as well as how their religious identity shapes the way faith-based and human-rights groups advocate on their behalf.

The final project, being carried out by Haroon Atcha, a doctoral student in political science in the School of Politics and Global Studies, looks at the impact of religious nationalism in Myanmar, an area that has produced a large number of refugees as the Rohingya community flees violence. This case is particularly significant because it involves Buddhism, a religion that is often overlooked in studies of religion, conflict and violence.

Undergraduate Certificate in Religion and Conflict

The final part of the program featured students who earned an Undergraduate Certificate in Religion and Conflict. Similar to the fellows program, students from any major can earn a certificate by completing 18 credits of coursework studying regional, political, and cultural components of religion, conflict, and peace.

“My study in religion and conflict gave me an immense appreciation for the sheer amount that I do not know,” said Joseph Bianchi, a science, technology, and society major who recently completed the certificate coursework.

“Exploring science and religion was immensely rewarding as a unique area of study," he said. "The nuanced interdependence of politics, religion, and secularity is foundational to understanding our modern world.”

“All of us at CSRC are so proud of the incredibly impressive students who were honored and recognized this year,” said Carlson. “These programs foster intellectual exchange, promote excellence in research, and strengthen civic engagement — all of which are at the heart of the center’s work.

“We not only hope to prepare students as they step out into the world, but also to prepare the world to be changed.”

Browse photos from the event in this Facebook album.

Sun Devils Fall to the Torreros, 4-2 AAF to begin play in Tempe February of 2019