Math has been John Douglas (J.D.) House’s favorite subject since he was eight years old. Math felt structured and clear cut, and it made sense to him.

He took Calculus I at age 15, as well as many other college level math classes while attending the Gary K. Herberger Young Scholars Academy for highly gifted students located on the Arizona State University West campus. He graduated from high school a year early at age 17, as part of the inaugural graduating class of Herberger Academy. 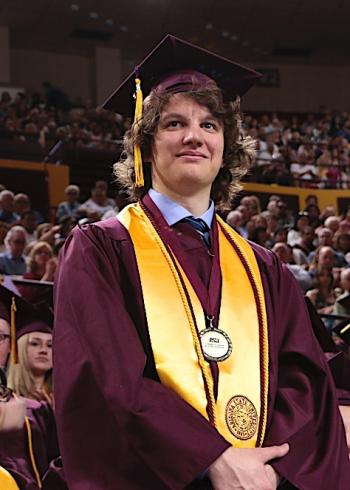 J.D. House was recognized as the Dean's Medalist for School of Mathematical and Statistical Sciences during the College of Liberal Arts and Colleges convocation. Download Full Image

House is now 20 years old and graduating with a Bachelor of Science in mathematics after only three years at Arizona State University. He plans to continue for one additional year to earn his master’s degree in mathematics, taking advantage of ASU’s 4+1 program.

House was chosen as the College of Liberal Arts and Sciences Dean’s Medalist for the School of Mathematical and Statistical Sciences.

“He has completed several of the most challenging graduate courses in theoretical mathematics and excelled in all of them,” President’s Professor Matthias Kawski said. “Faculty unanimously commented on J.D.’s academic work in the most positive terms, some tenured faculty considering J.D. the best undergraduate they ever have encountered at ASU.

House has also participated in the William Lowell Putnam Mathematical Competition in each of his three years while at ASU. The Putnam Competition is comprised of 12 challenging mathematical problems, each worth ten points, and students have six hours to solve them. The mean score is usually zero, and sometimes one.

This year, House scored 32 points, tied at 326th overall. He was also part of the three-person team representing ASU that scored the highest the university has ever achieved, placing them in the top 5 percent of 575 institutions. The other team members were Liam Lawson and Sebastian Scouras.

“It feels good to be the team that did it,” House said. “We answered the most questions than we have in a long time, and we got a pretty good score and that’s something that makes us proud to be part of ASU — and that’s cool.”

House is thinking of going into public health for his career, to work on predicting epidemics. What is his dream job? To be the director of the Centers for Disease Control and Prevention (CDC). Or maybe become a math professor, because he loves to teach and enjoys doing research.

Outside of math, one of his passions is weightlifting. He not only does weightlifting for recreation and health reasons, but he also coaches and is working to become a nationally qualified referee. He enjoys the structure and strategy behind coaching others, and likes coaching “because it is fun to watch someone apply what you taught them, and do better because of it.”

House describes weightlifting as a metaphor for life.

“After working hard for two months, you will reach your personal record (PR) and get your name and PR on the board and everyone will be super excited for you,” he explained. “You will be very excited for yourself, you will really be pumped that you got the weight that you worked so hard for.

“Then five minutes later, someone else nearby will warm up with that same weight.”

“What you learn is you don’t compare yourself to other people," he said. "You compare yourself to you in the past. And that is a life lesson you take away from weightlifting. There may be all kinds of reasons why someone else will lift more than you, but they just aren’t relevant. It’s much more important that you lift more than you did yesterday.”

House describes how beginners hit PR’s all the time because they are new, learning proper techniques, getting stronger and improving rapidly. But then things start to get harder and reaching each new PR takes longer.

“You work harder to earn each one, and it comes rarely and it feels good. You literally are getting better — you can measurably tell you are getting better. Achieving each new PR gets more and more satisfying,” he said.

He describes the supportive atmosphere in the gym, when someone is attempting a PR.

“We will all stop and watch and sometimes even record it, and part of the reason is that when they hit their PR, that is not just a success for them, that is a success for all of us," House said. “It feels good throughout the gym, we cheer and clap and high five them. It’s a success from coaching, it’s a success because they are your friend and you’ve encouraged them. It’s a very cool environment and I like our community a lot.” 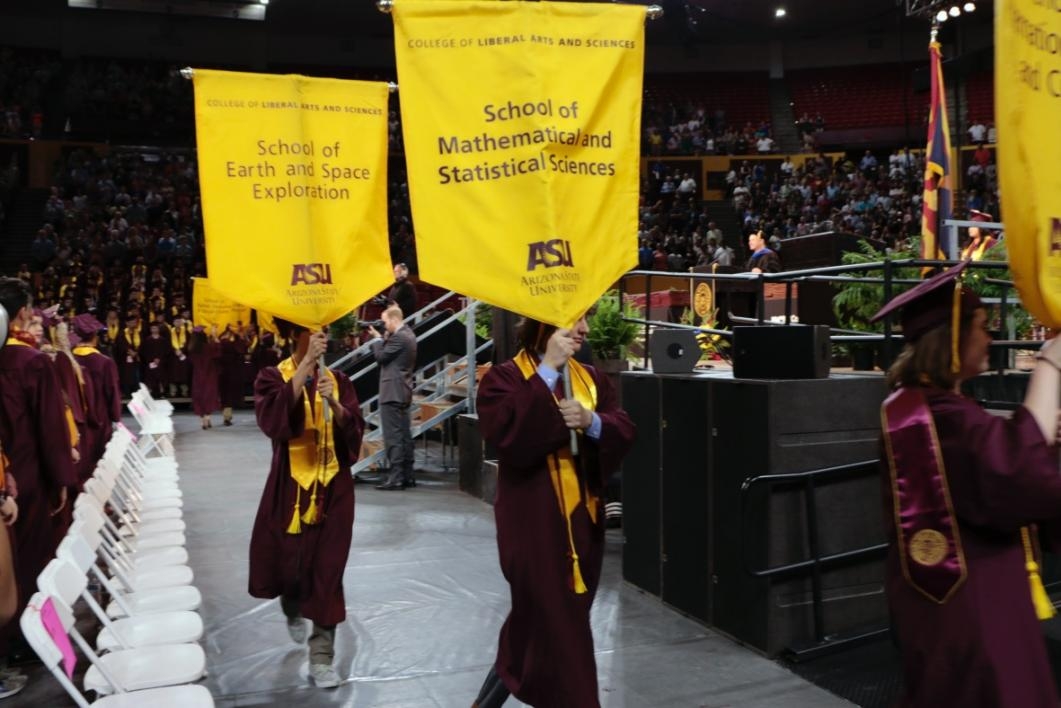 J.D. House carries the banner for the School of Mathematical and Statistical Sciences during the College of Liberal Arts and Sciences spring convocation ceremony. 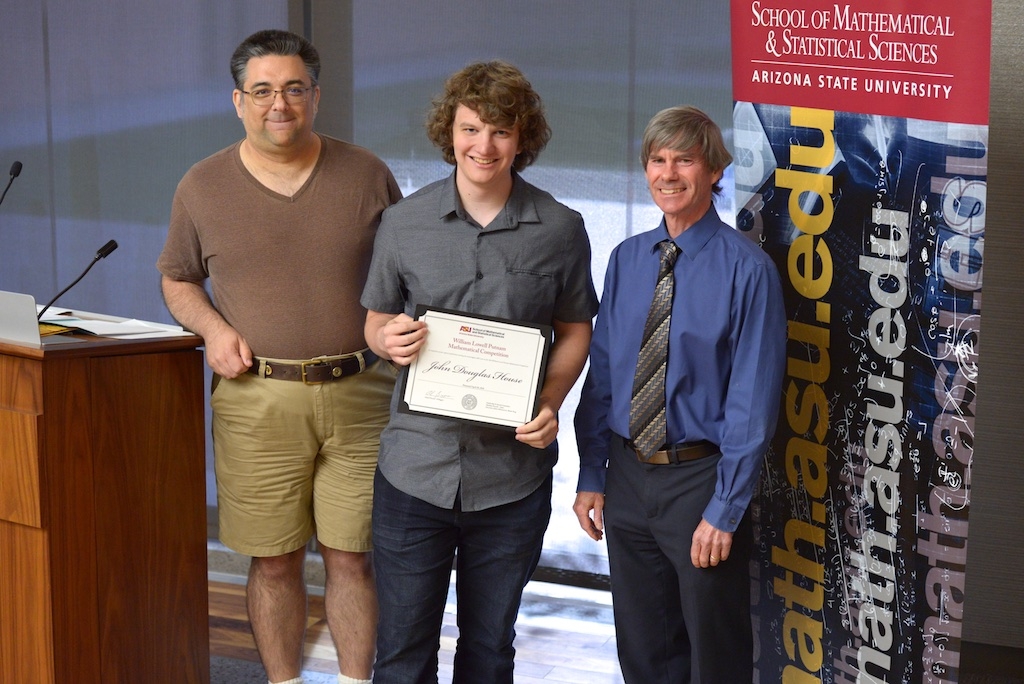 J.D. House was recognized for his outstanding Putnam Competition results at the School of Mathematical and Statistical Sciences Scholarship and Awards Ceremony. Pictured are (L-R) Honors faculty, lecturer and coach of the Putnam team, Christopher Heckman, J.D. House, and school director Al Boggess. 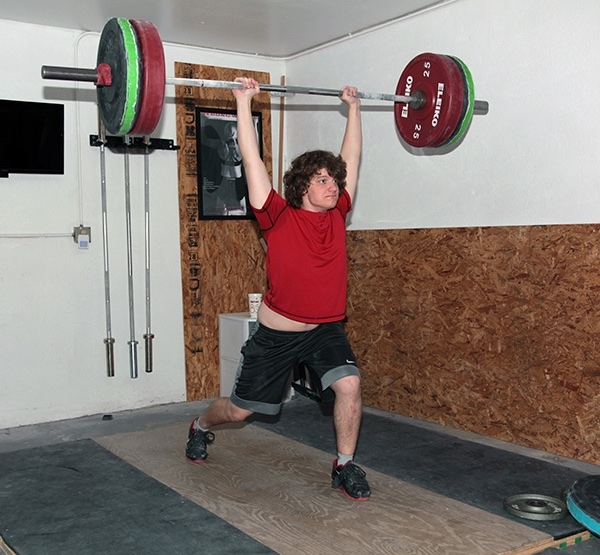 In between reaching PR goals, House sat down with us to answer a few questions about his time at ASU.

Question: What is something you learned while at ASU — in the classroom or otherwise — that surprised you, that changed your perspective?

Answer: There have been quite a few examples of this, but if I had to choose, I would probably go with my existentialism course that I took in summer 2017. That was quite an experience.

A: I could say, “take classes seriously,” and that would be about right, but I don’t think that piece of advice is particularly meaningful just because it’s so cliché and unrealistic. Instead, I’ll say take the right classes seriously. I coasted through some of my undergraduate classes — particularly my non-math classes — and there are a few where I got an A but I didn’t get as much value from it as was there. My advice: don’t do that; don’t coast through classes of value.

A: Easily "The Cube." There’s a structure in the southern half of campus, near-ish to Barrett [The Honors College] which is essentially a cube with a square cut out of the top. What’s left of the top has lights pointed at it which change its color. It’s a very nice, relaxing place that I’ve been to many times with various groups of people. It’s my go-to novel place on campus.

A: I think that most people don’t think about the fact that people came up with all the facts/theorems that you learn about in school. It’s not like everyone in history was taught the Pythagorean theorem. A long time ago, a mathematician actually sat down and discovered the fact for himself. I think that’s especially easy to forget when the math starts to become foundational to things people do. I often see that in Calculus 3 students, when talking about Green’s theorem. People think it’s a random fact that just happens to be true when an actual person discovered it themselves.

A: Underfunded education programs. The cycle of poverty is just brutal, and I wish everyone had the opportunity to succeed. I think education is a reliable avenue to success, so I would dedicate attention there.

Arizona State University announced today that it has selected Dr. Susan M. Pepin, an educator, surgeon and clinician, to lead a series of new health initiatives aimed at improving health outcomes at scale and growing clinical partnerships.Pepin will join ASU on Aug. 1 as managing director of health and clinical partnerships, senior adviser to the executive vice president, and clinical professor in...

Pepin will join ASU on Aug. 1 as managing director of health and clinical partnerships, senior adviser to the executive vice president, and clinical professor in the College of Health Solutions. 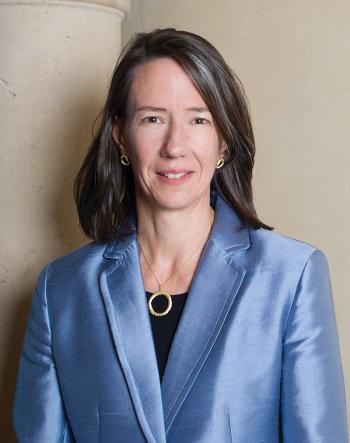 Dr. Susan M. Pepin comes to ASU from Virginia G. Piper Charitable Trust, where she has served as president and CEO since 2014. She previously served as associate dean for diversity and inclusion and associate professor of surgery and pediatrics at Geisel School of Medicine at Dartmouth, where she is known for diversifying the medical school’s student body. Download Full Image

ASU, already a leader in health and health-care initiatives by training health-care workers, cultivating life-changing research and developing new blueprints and missions for people and organizations that impact health and health care, seeks to take that work further by:

• Launching a broad-based initiative to virtually link clinical providers in the state and create a data aggregator that will allow health-care experts and providers to analyze public health issues and develop individual and collaborative solutions to affect health outcomes at scale.

• Growing graduate medical education in collaboration with health partners; strengthen the delineation of and support for multiple pathways to health-related careers; foster access to health careers while emphasizing diversity and success; and intentionally match workforce needs to student programming opportunities.

• Further integrating and leveraging the Health Futures Council into all of ASU’s health and health-care-related initiatives.

• Coordinating and expanding local and clinical partnerships to open adjacent possibilities and define a new model for other regions/areas.

“Dr. Pepin is a brilliant systems thinker who has the vision and skills to forge new territory for our health initiatives,” said Sethuraman Panchanathan, executive vice president and chief research and innovation officer at ASU. “These efforts come at a critical time when technology, partnerships and new thinking and energy can provide opportunities for health outcomes at scale.”

Pepin comes to ASU from Virginia G. Piper Charitable Trust, where she has served as president and CEO since 2014. She previously served as associate dean for diversity and inclusion and associate professor of surgery and pediatrics at Geisel School of Medicine at Dartmouth, where she is known for diversifying the medical school’s student body. With specialization in neuro-ophthalmology and pediatric ophthalmology, she provided expert care to patients. She worked as a teacher, clinician and surgeon for more than 14 years and mentored hundreds of students and residents through the admissions process and throughout their journeys in becoming physicians.

“I am thrilled to join ASU and help further its tremendous efforts in health care and medical education already underway. ASU’s emphasis on transdisciplinary, innovative approaches to addressing problems is the perfect environment to scale health care solutions at the global level,” Pepin said.