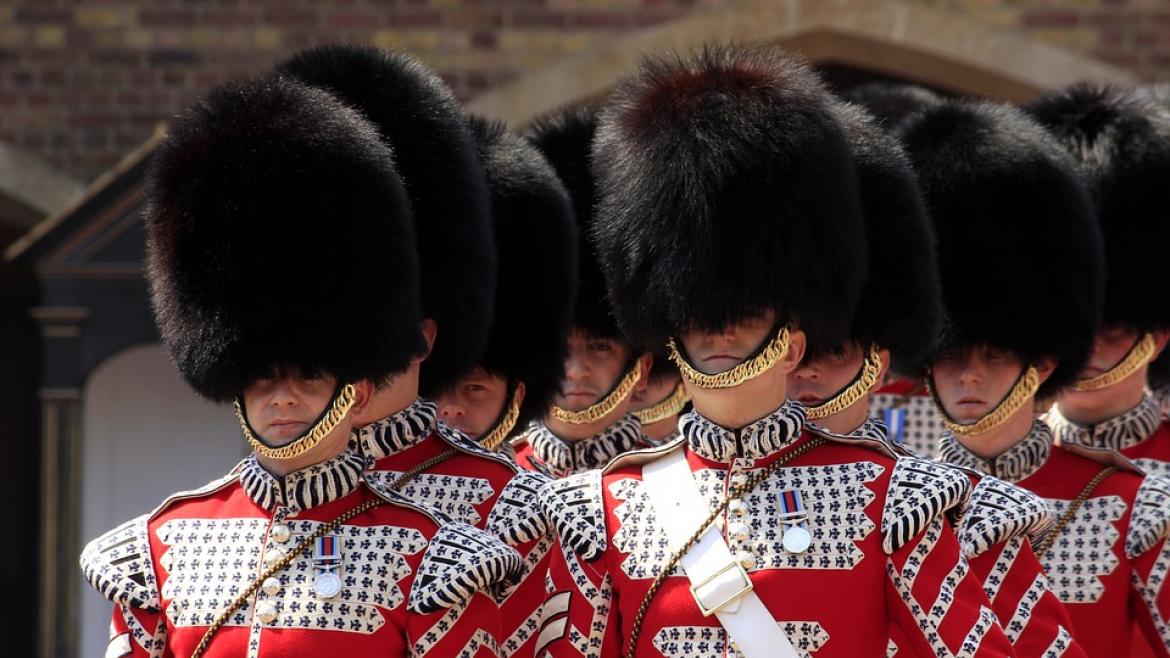 A time of transition: British royal family zips through milestones

Royal watchers have had plenty of reasons to rejoice lately: Queen Elizabeth’s 92nd birthday last month, the recent birth of Prince William and Duchess Catherine’s third child, Louis; Princess Charlotte’s third birthday; and, of course, the upcoming wedding of Prince Harry and Meghan Markle on May 19.

These are not only milestones but possible torch-passing moments as rumors of Queen Elizabeth’s retirement from public life abound. It begs several questions: what will the face of Britain’s monarchy look if that happens? Who are the players? And is everyone prepared to take on those responsibilities?

ASU Now asked Retha Warnicke, an emeritus professor in Arizona State University's School of Historical, Philosophical and Religious Studies and author of seven books, to discuss a possible royal changing of the guard. 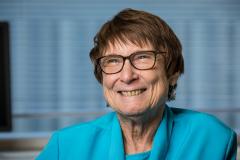 Question: What will the monarchy look like in the coming years given that transitions seem to be in play?

Answer: I think this royal family will follow the customary procedure. Charles will become Charles III in a grand coronation ceremony. As he has promised that his present wife will never become queen, probably she will remain the Duchess of Cornwall, while enjoying the trappings of royalty. After all, Charles won’t be the first English king to take a second wife. Since he is relatively old when succeeding to the throne and is not very popular (he actually seems to avoid publicity), his heir Prince William will almost certainly have a more prominent public role than would otherwise be the case. William and his family are already popular and are often seen in public gatherings. The media is enthralled, and we see much more of them than of Charles. I suspect Charles, who has always been somewhat withdrawn and reticent about publicity, will welcome his elder son’s and his family’s support and look to them as regular deputies.

I cannot really see much employment for Harry, who has never played by the royal rules. I find it interesting that the public statements about his future wife, Meghan, refer to her as an American and have seemed to ignore her African heritage. The two have also not attempted to hide the fact that they have been living together at Kensington Palace. The queen, of course, approved of the marriage. I think she worried what he would do (and rightly so) if she said no. As to the future of the monarchy, despite Harry, it is popular enough, especially in the great-grandchildren’s generation so that they will continue on as they have done — appearing publicly when required and supporting whatever government is in power.

Q: Americans love royal-watching, but how do Brits feel about their own monarchy?

A: They are absolutely split on this issue. Some of the working class, in particular, are hostile to the monarchy but they are also hostile to the nobility and rich people generally. By contrast, many in the middle class are enthralled with the monarchy. The royal family attract crowds whenever and wherever they appear in public. Many Brits cannot see enough of them. The press and TV would not spend so much time on them if they were not so popular. This queen and her grandchildren (the children of Princess Diana), as opposed to her son Charles, are extremely popular, if for no other reason than she represents the monarchy that defended Great Britain during the Great War. Many still remember her father’s commitment to his kingdom. There still is a feeling of patriotism about the queen, if not her grandchildren.

Q: It appears as if the queen did exceptionally well in her duties, but how do you think Charles will fare as king of England?

A: Charles does not get high marks. He turned his back on his first, popular wife and after she died, he married his lover. Diana is still extremely popular (as are the children who are associated with her more than with their father). I think Charles will do his duties as king but he has always been shy about public exposure and will almost certainly be less prominent socially than his mother has been. I think he will rely on William and his family to make up the difference in public appearances. He will be where he must be on special occasions but will be somewhat awkward in appearance and avoid publicity when he can. I do not foresee a possibility of a personality change.

Q: What are some of the deeper issues you think Charles and the royal family will face in the upcoming decade?

A: The lack of privacy will be a continuing, deep issue for the family. With modern technology — smartphones that take photos, for example — they will have more difficulty than ever before protecting the little privacy they have. The problem is that these instruments can be used even when the subject is unaware of them. In addition, royal family members are going to have to develop, if they have not already started doing so, guidelines for electronic usage by the members of their family. The last decade has seen a tremendous jump in this technology and it may accelerate in future years.

The future of search and rescue

The drone threads its way through the disaster area, beneath ceilings and power lines, through narrow corridors, sewer pipes and hallways. Bodies and survivors lie under rubble. When it’s not feeling its way through tight confines, there’s wind to contend with.Pilot Ryan Davis flies the drone quickly and smoothly. There are no halting or jerky movements.At each potential location of a survivor... 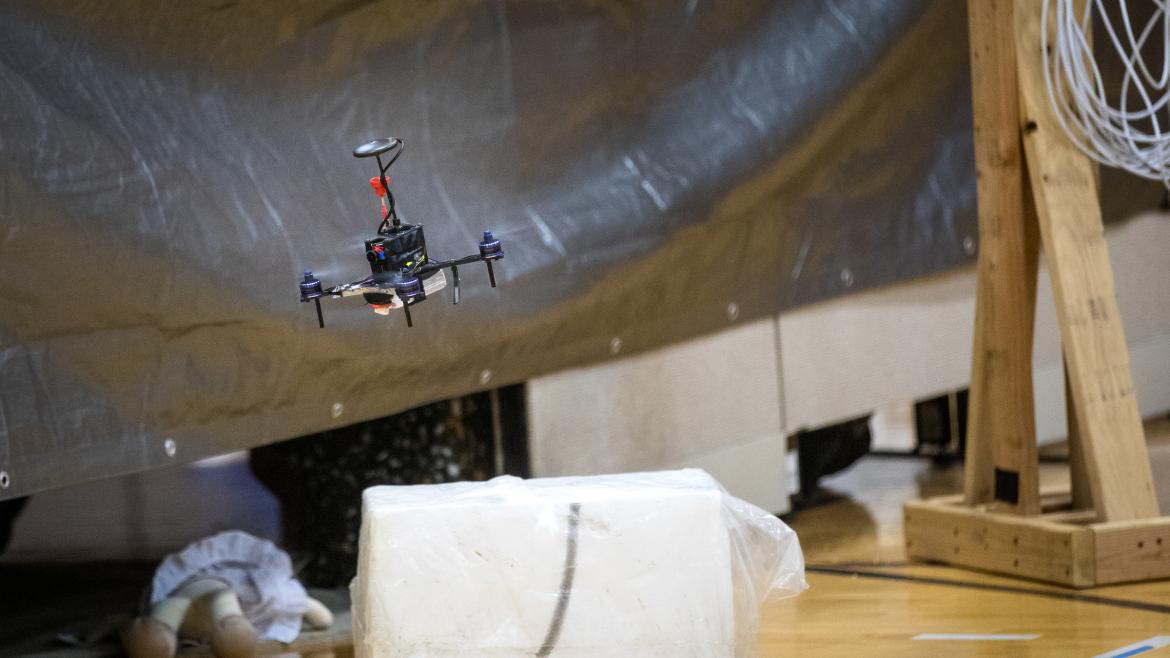 The future of search and rescue

The drone threads its way through the disaster area, beneath ceilings and power lines, through narrow corridors, sewer pipes and hallways. Bodies and survivors lie under rubble. When it’s not feeling its way through tight confines, there’s wind to contend with.

Pilot Ryan Davis flies the drone quickly and smoothly. There are no halting or jerky movements.

At each potential location of a survivor, Davis lands and switches on the infrared camera to look for a survivor’s heat signature. The drone doesn’t spend more than 20 seconds at each spot. Then he heads into the sewer pipes.

The disaster area was a gym on Arizona State University’s Tempe campus. Davis is a senior majoring in aerospace engineering. The onlooker was an industry representative, and the event was the finale of the Innovation Challenge, a competition between student teams to design and showcase a drone system to help rescuers find survivors in a disaster environment.

The competition was hosted by ASU’s Research Enterprise, a nonprofit arm of the university that connects applied research and development with the Department of Defense, federal agencies and the intelligence community. Industry representatives came from the U.S. Navy, Boeing, Raytheon, the Arizona Department of Emergency Management, and the National Counterterrorism Center, among other others.

Last fall 18 teams were awarded $3,000 each to design their systems. Two design reviews from academic, industry and government reps narrowed the list to eight.

The drone systems had to hit some marks. Real-time video was required. The system had to be a small, lightweight air vehicle so it didn’t overburden teams already humping a lot of gear. It had to be rugged enough to operate in harsh conditions. First responders won’t have time for extended training, so the system needed to be simple to learn, operate and maintain. They had to fly for at least 15 minutes at a time. There were other challenges, but ASU-educated engineers put their minds to them.

Christian Fortunato, a systems engineer at ASU Research Enterprise, was the competition’s maestro.

“This is to help create innovative solutions to problems we face today,” Fortunato said. “Ultimately we hope it’s fun.”

Industry reps were visibly impressed, commenting on the students’ poise in delivering technical discussions as well as how they solved problems.

Fortunato converted the gym into a mock scenario with three buildings, a forest, power lines, sewer pipes hiding a large rat, and bodies under piles of rubble. Flames flickered in one building, and an industrial fan provided a strong wind. Some of the mannequins were warm (heating pads, if you’re curious). Some were at room temperature. The warm bodies were the survivors.

Each team had two and a half hours to present their system and then do the search-and-rescue mission. 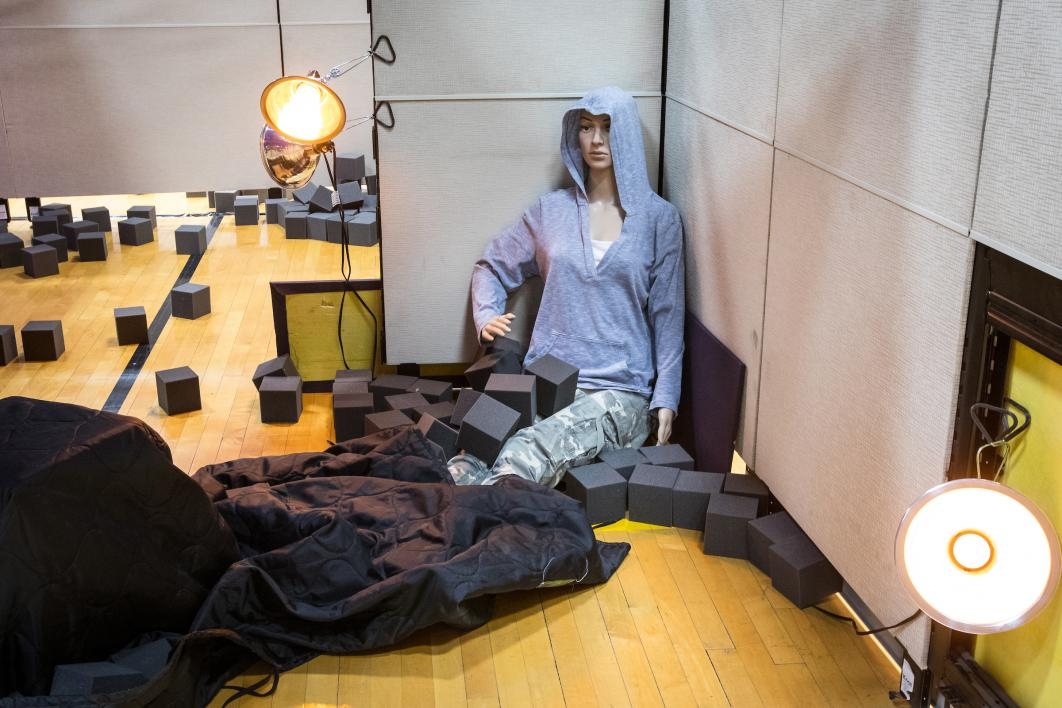 The simulated earthquake-ravaged city features some warm mannequins that give an infrared signature as survivors inside building for the Innovation Challenge fly-off in a gym on the Tempe campus Thursday. 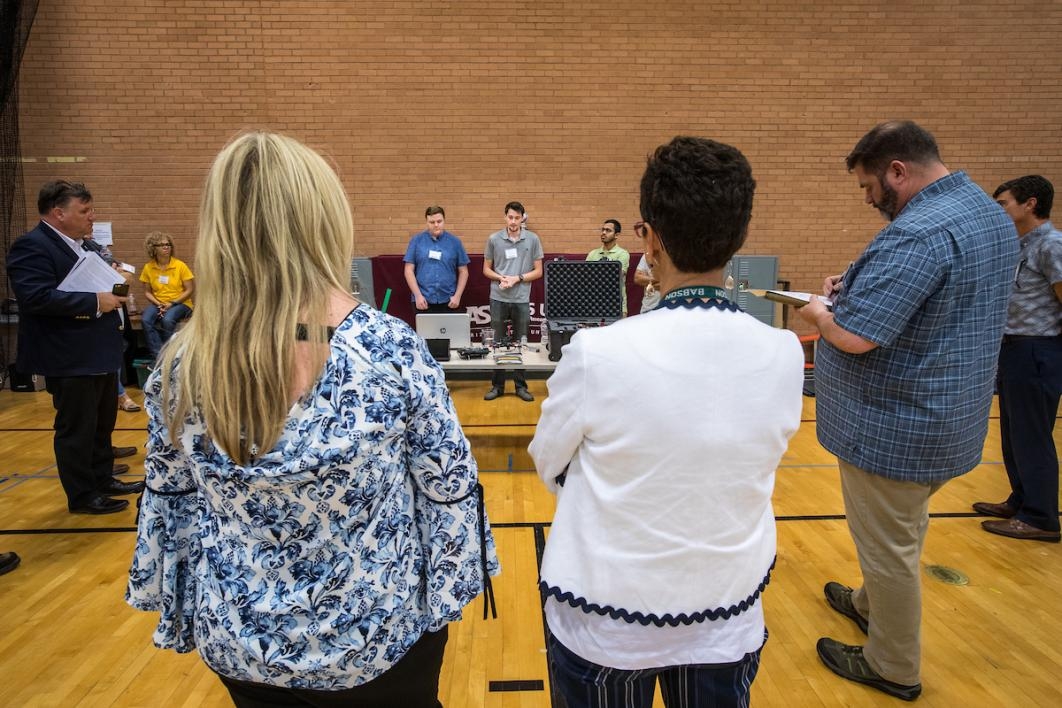 Members of Team ASU First Person Viewer give their static display to the review committee Thursday on the Tempe campus. 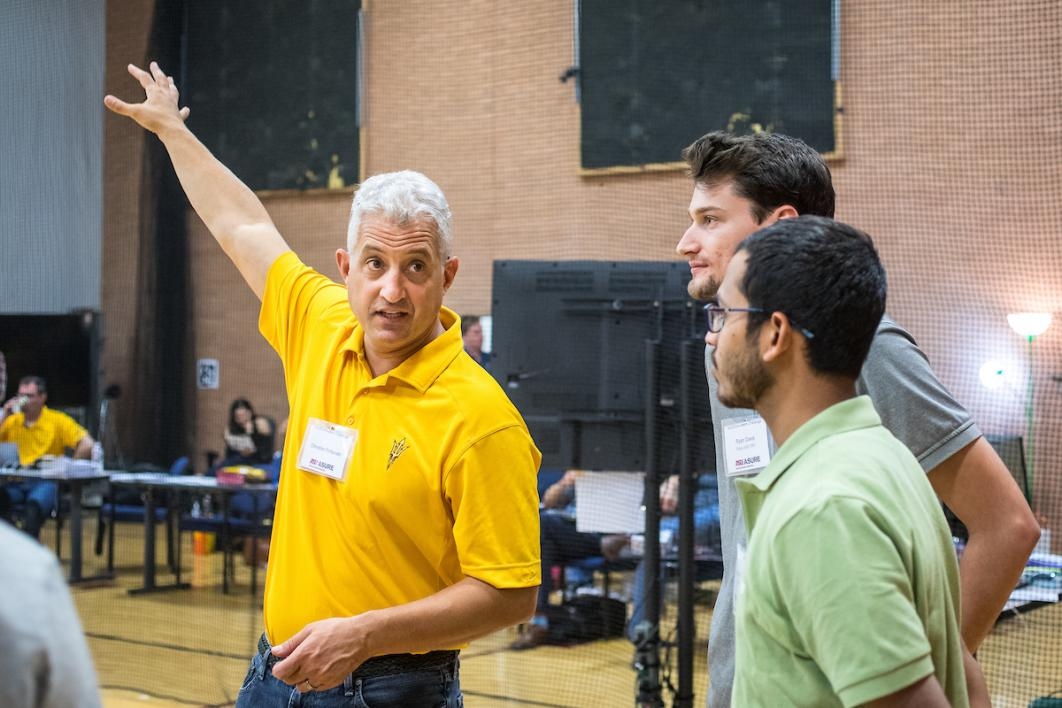 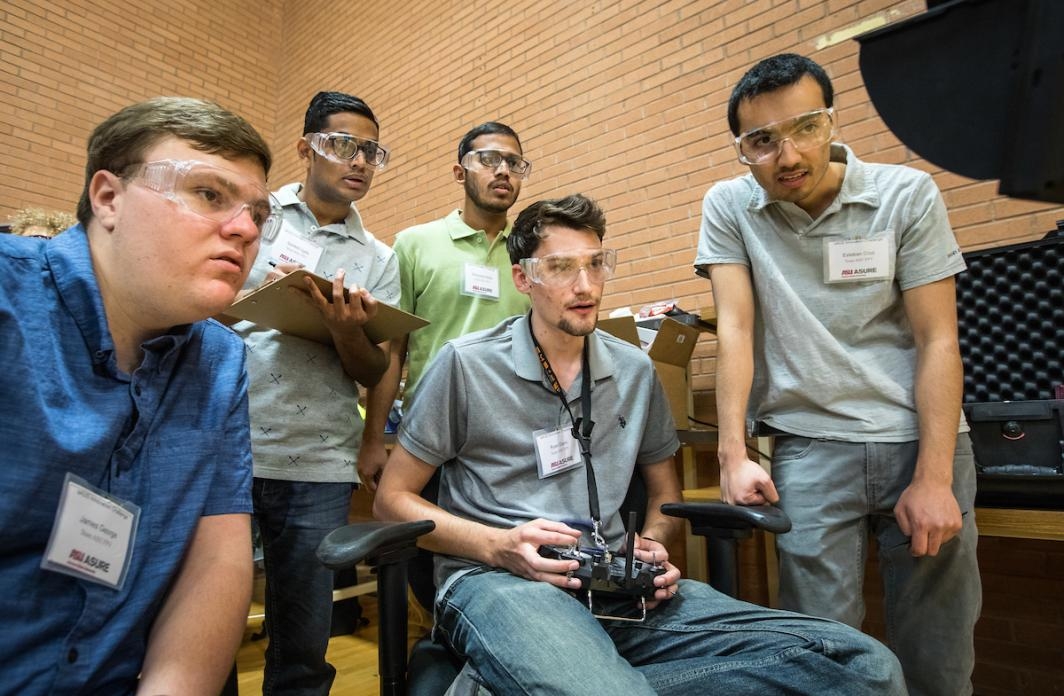 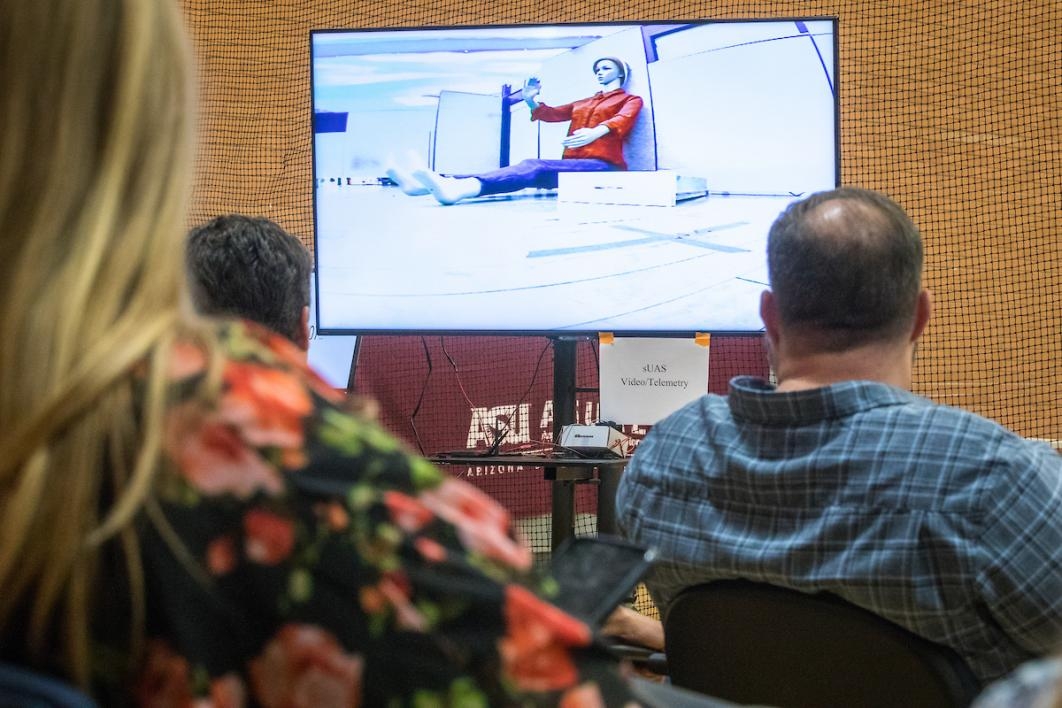 Viewers see that the drone has located a survivor as Team ASU First Person Viewer guides their drone through the obstacles. 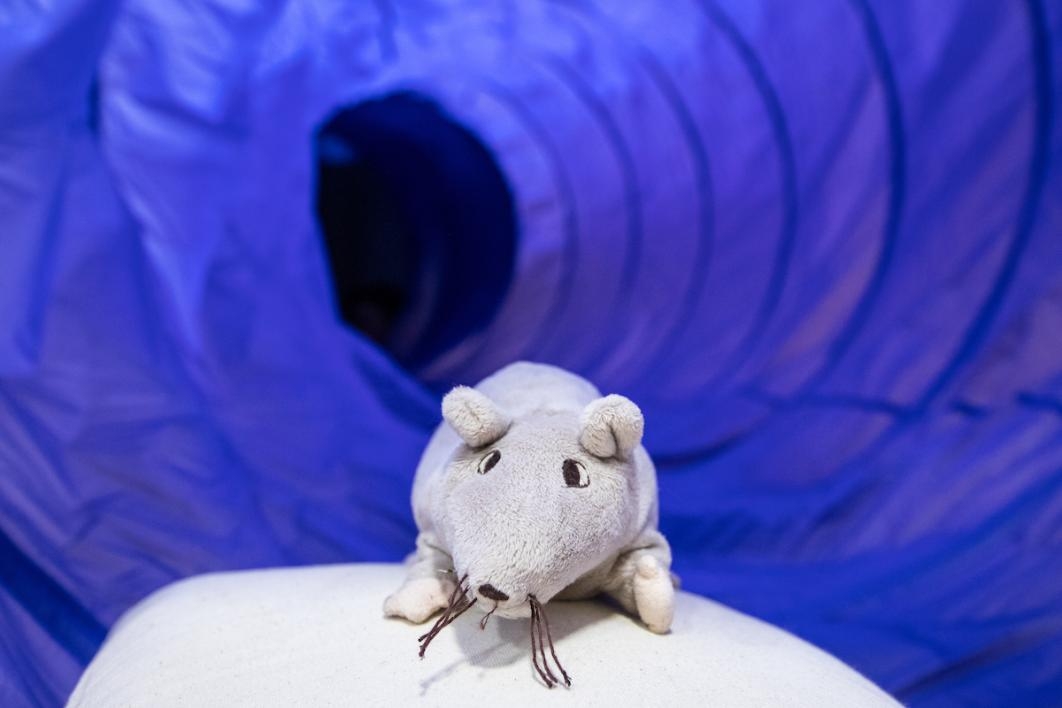 The simulated earthquake-ravaged city features power lines, flames flickering in one building and even a giant rat in sewer pipes. 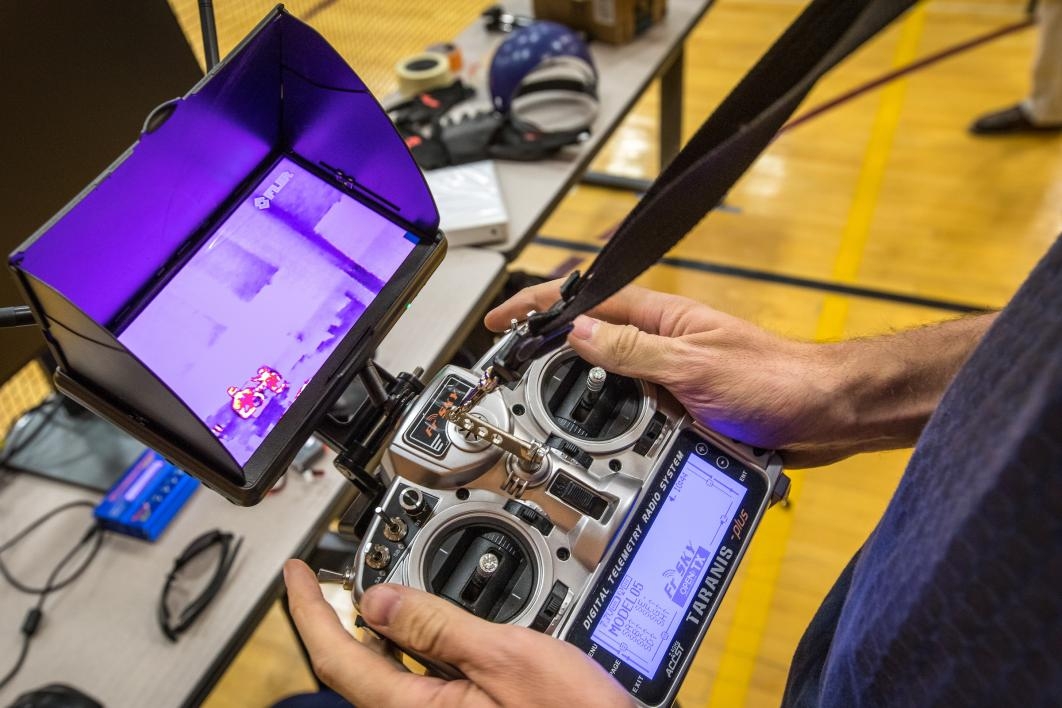 Robotics engineering senior Maxwell Lombardi flys his Team Liftoff's drone with its FLIR (forward-looking infrared) camera as he performs a practice flight in the testing gym on the Tempe campus on May 1. The monitor shows the heat pattern of two people. 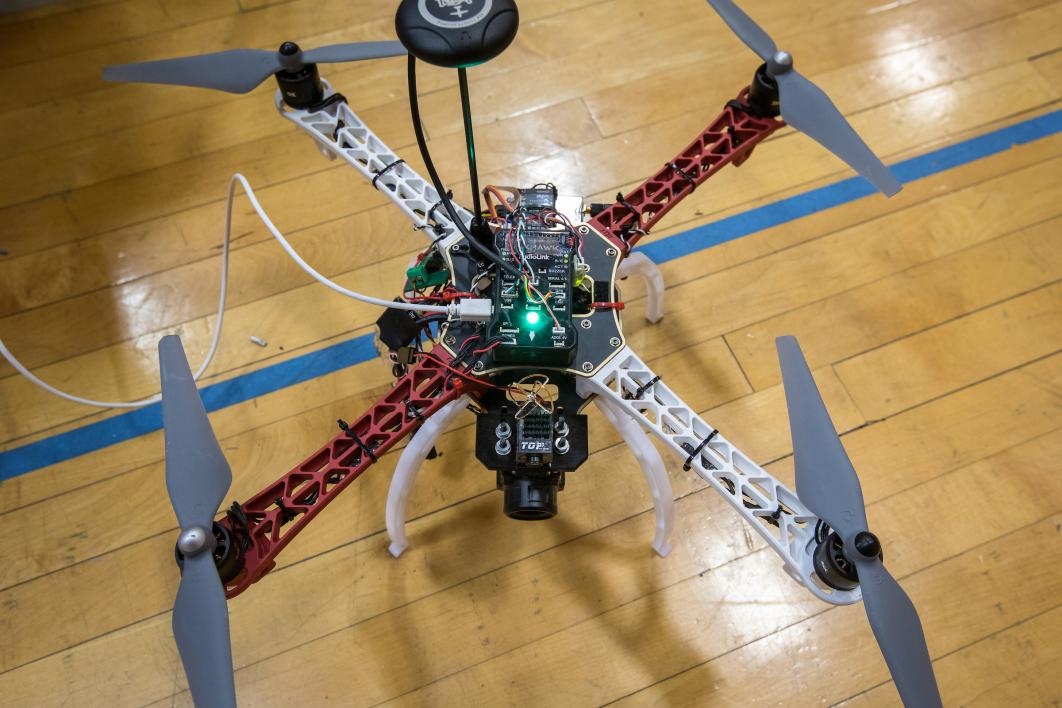 Team Liftoff's drone uses a modular design, so parts damaged in crashes can be swapped out quickly. 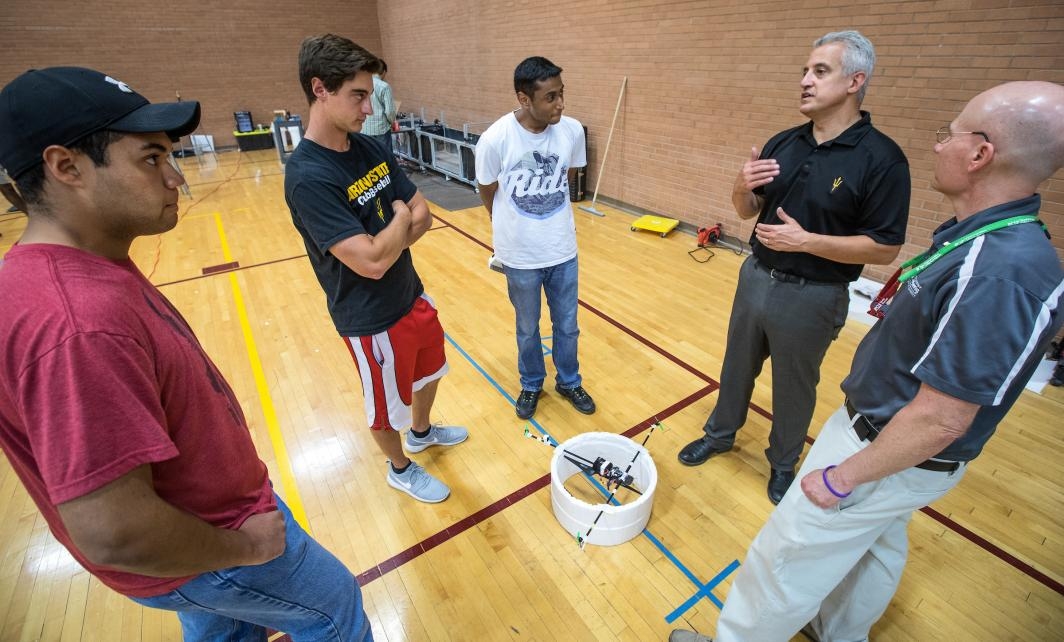 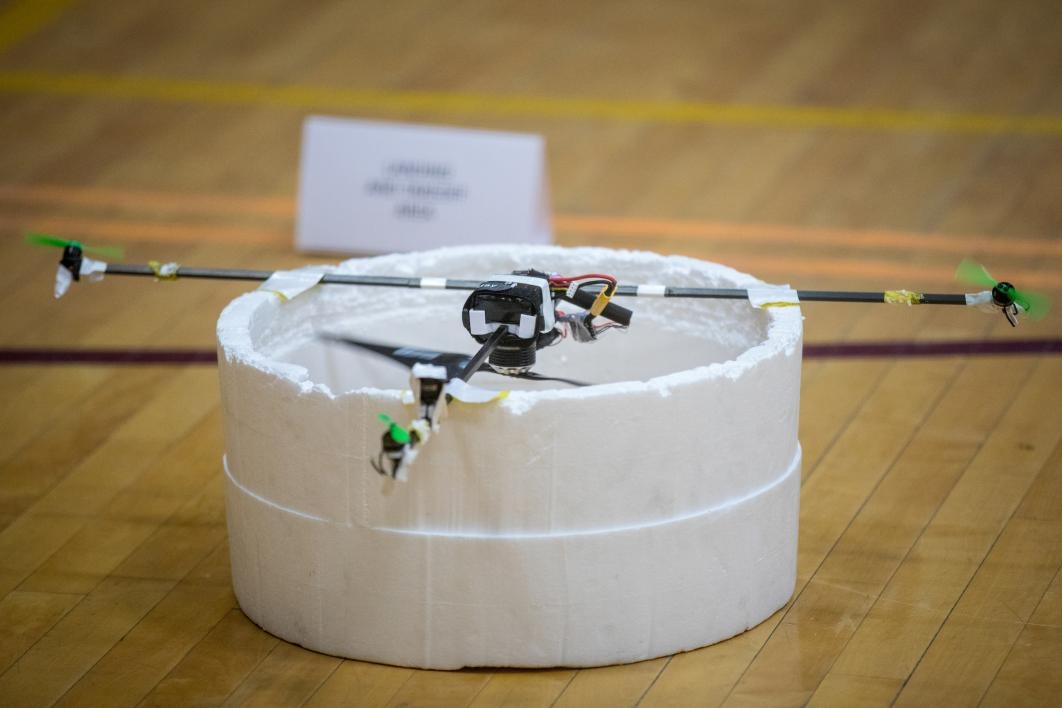 Team Hawk's drone isn't quite ready to fly at the May 1 practice, but it passes a safety control test.

Davis’ team was Team ASU First Person Viewer, which was declared the winner of the competition Friday evening.

The team’s system was weather-proofed with a lightweight coating that doesn’t overheat. (They demonstrated this by dunking a motor in a glass of water and turning it on.) This drone has no problem flying in rain or wind. (With a low profile, there’s not a lot of area for wind to grab ahold of.) It came in around $500. Davis and his team had a secret edge; they all belonged to a campus drone racing club.

Maxwell Lombardi, a senior graduating with a degree in robotic engineering, heard about the challenge a year ago in class.

“I’ve always been interested in drones and UAVsUAV stands for an unmanned aerial vehicle.,” Lombardi said. “This is my first time working with them.”

His group, Team Liftoff, built their drone for $3,000. Their infrared camera cost $2,000. Their drone was a modular design, so parts damaged in crashes can be swapped out quickly.

They switched batteries five times, returning to base with about 60 percent power. “We wanted to err on the side of caution,” Lombardi said.

Team Jackdaw had the most unusual design; it was a self-inflating parasail.

“It’s all about getting endurance in a small package,” said team member Brett Fiedler.

“We wanted to do something different,” said team member Calvin Caldwell.

“Your system is really made to soar,” Fortunato said.

And soar it did, after a tricky hand launch. It circled like a turkey vulture riding a thermal while buzzing like a bumblebee. An air-conditioning vent created a tough downdraft, which dented the parasail when it flew underneath.

“We know we saw someone in the trees, but we couldn’t tell whether they were alive or dead,” Caldwell said. “It can perform a lot better outdoors.”

Jackdaw’s camera system wasn’t optimal, they admitted. All the teams were constrained by time and money. They earned a lot of praised from the audience for going out on a limb and creating an entirely new aircraft.

“To me, that’s something gold star,” said an industry rep.

Top photo: Team ASU First Person Viewer guide their drone in the Innovation Challenge fly-off, a search-and-rescue mission for team-designed and -built small unmanned aerial system, in a gym on the Tempe campus Thursday. The team was one of eight competing in a simulated earthquake-ravaged city. The teams demonstrated their projects' utility and performance in finding survivors and victims in an urban setting. Photo by Charlie Leight/ASU Now