When it comes to matching simplicity with staggering creative potential, DNA may hold the prize. Built from an alphabet of just four nucleic acids, DNA provides the floor plan from which all earthly life is constructed.

But DNA’s remarkable versatility doesn’t end there. Researchers have managed to coax segments of DNA into performing a host of useful tricks. 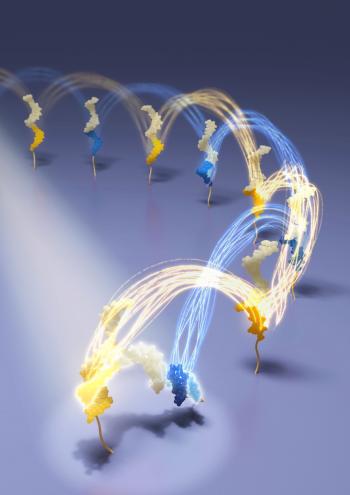 Hao Yan, director of the Biodesign Center for Molecular Design and Biomimetics, and his colleagues have developed a walking robot constructed from sequences of DNA. The robot uses a cartwheeling motion to rapidly cover distance. The new innovation opens the door to other DNA nanotechnology innovations in electronics, materials science and medicine. Graphic by Zhuoru Li Download Full Image

DNA sequences can form logical circuits for nanoelectronic applications. They have been used to perform sophisticated mathematical computations, like finding the optimal path between multiple cities. And DNA is the basis for a new breed of tiny robots and nanomachines. Measuring thousands of times smaller than a bacterium, such devices can carry out a multitude of tasks.

“It is exciting to see that DNA walkers can increase their speed significantly by optimizing DNA strand length and sequences; the collaborative effort really made this happen,” Yan said.

The study was led by Nils G. Walter — the Francis S. Collins Collegiate Professor of Chemistry, Biophysics & Biological Chemistry, founding director of the Single Molecule Analysis in Real-Time (SMART) Center and founding co-director of the Center for RNA Biomedicine at the University of Michigan — and his team, along with collaborators from the Wyss Institute, the Dana Farber Cancer Institute and the Department of Biological Chemistry at Harvard (all in Boston).

“The trick was to make the walker go head over heels, which is so much faster than the hopping used before — just as you would see in a kung fu action movie where the hero speeds up by cartwheeling to catch the villain,” Walter said.

The improvements in speed and locomotion displayed by the new walker should encourage further innovations in the field of DNA nanotechnology.

The group’s findings appear in the advanced online issue of the journal Nature Nanotechnology.

Nanoarchitects build their DNA structures, motors and circuits using the same basic principle as nature. The four nucleotides, labeled A, T, C and G, bind to each other according to a simple and predictable rule: Cs always pair with Gs, and As always pair with Ts. Thus, varying lengths of DNA may be programmed to self-assemble, snapping together to form an unlimited variety of two- and three-dimensional nanostructures. With clever refinement, researchers have been able to outfit their once-static nanocreations with dynamical properties.

One of the more innovative applications of DNA nanotechnology has been the design of robotic walking devices composed of DNA strands that successively move in a stepwise fashion across a path. The method enabling DNA segments to stroll across a defined area is known as strand displacement.

The process works like this: One leg of the robotic device is DNA strand 1, which is bound to complementary strand 2, through normal base pairing. Strand 1 contains an additional, unpaired sequence dangling from its end, which is known as the toehold.

Next, DNA strand 3 is encountered. This strand is complementary to DNA strand 1 and includes a toehold sequence complementary to DNA strand 1. Once the toehold of strand 3 binds with the toehold of strand 1, it begins sequentially displacing each strand 2 nucleotide, one by one, until strand 2 has been is completely replaced by strand 3. Strand 2 then dissociates from strand 1 and the process can begin again. (See graphic below).

Toehold-mediated strand displacement, which forms the basis of other DNA nanodevices, allows DNA structures to move from one complementary foothold on the walking surface to the next. As each DNA strand is displaced by a new strand, the nanocreature takes a step forward. 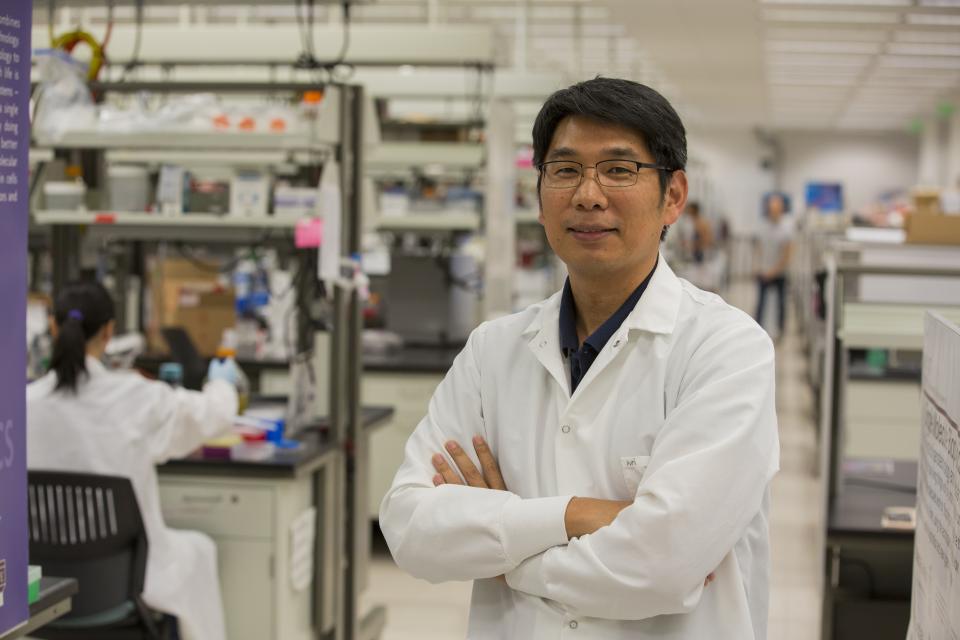 Hao Yan is the Milton D. Glick Distinguished Professor of Chemistry and Biochemistry at ASU and director of the Biodesign Center for Molecular Design and Biomimetics.

Successful DNA walkers of various kinds have been designed and have demonstrated the ability to ferry nanosized cargo from place to place. Until now, however, the strand displacement reactions they rely on have been slow, generally requiring several minutes to move a short distance. This is much slower than naturally occurring processes in living systems like protein motors, which can perform feats of dissociation similar to strand displacement in much faster time frames.

While theoretical calculations suggest that individual operations by such nanodevices should occur in seconds or less, in practice, such operations typically require minutes or even hours. (A recently designed cargo-sorting walker, for example, required five minutes for each step, with foothold spacings just 6 nm apart. This speed was on a par with similar strand-displacement walkers.)

In the new study, researchers sought to optimize this process to see how quickly a walker designed with speed in mind could move. The limiting factor in terms of speed did not appear to be the strand displacement process itself, but rather the lack of fine-tuned optimization in the overall walker design.

The team redesigned their walker for maximum speed and used a fluorescent imaging technique known as smFRET (for single-molecule fluorescence resonance energy transfer) to chart the DNA walker’s progress and evaluate its subtle kinetic properties.

By altering the lengths of toehold sequences and branching migration points, the stepping rate could be keenly optimized, making for a briskly moving nanorobot that left competitors in the dust, boasting stepping rates a full order of magnitude faster than previous DNA walkers.

Dynamic DNA nanotechnology often makes use of toehold-mediated strand displacement reactions. In this example, the red strand binds to the single-stranded toehold region on the green strand (region 1), and then in a branch migration process across region 2, the blue strand is displaced and freed from the complex. Reactions like these are used to dynamically reconfigure or assemble nucleic acid nanostructures. In addition, the red and blue strands can be used as signals in a molecular logic gate. Credit: Antony-22 (Public domain)

Part of the robot’s advantage over its competitors is due to its unusual technique of locomotion. Rather than simply stepping from one surface foothold to the next, the acrobatic walker moves head over heels in a cartwheel fashion, while remaining securely bound to at least one foothold at all times.

The stability of the double-stranded sequences anchoring the base of the robot to the track surface, while the free toehold searches out the next complementary sequence, may be one factor improving the walker’s speed. The cartwheeling design also allows strand displacement to sequentially proceed in a direction away from the foothold surface, which improves efficiency.

Once the walker was optimized, super-resolved single particle tracking was used to observe the device’s movement over a 2D surface studded with footholds for the walker, covering a range of up to 2 microns. The best walker optimized in the study was able to search ~43 foothold sites per minute with a stepping distance of ~10 nm. Strand displacement occurred at rates of about a tenth of a second. Analysis suggests the device can take hundreds of steps without dissociating.

While still lagging behind naturally occurring protein reactions, the optimized cartwheeling walker offers a marked advancement in performance, representing an order of magnitude improvement over earlier versions, while not consuming any fuel. Borrowing further insights from natural systems may allow dynamical DNA devices like the walker to accelerate even more in the future by converting chemical energy into directed speed.

The study underlines the opportunities for optimization of a range of DNA nanostructures, considerably enhancing their speed and versatility.

One Golden Grad's story: A single mom in a different era

Every year in May, the ASU Alumni Association gears up for its largest event of the year: to honor graduates from 50 years back. Though 1968 may seem like a long time ago, for a number of returning grads it feels like yesterday.The Golden Graduates have the opportunity to reconnect over a two-day special event that includes campus tours, receptions with VIPs, a dinner prior to the graduation cerem... 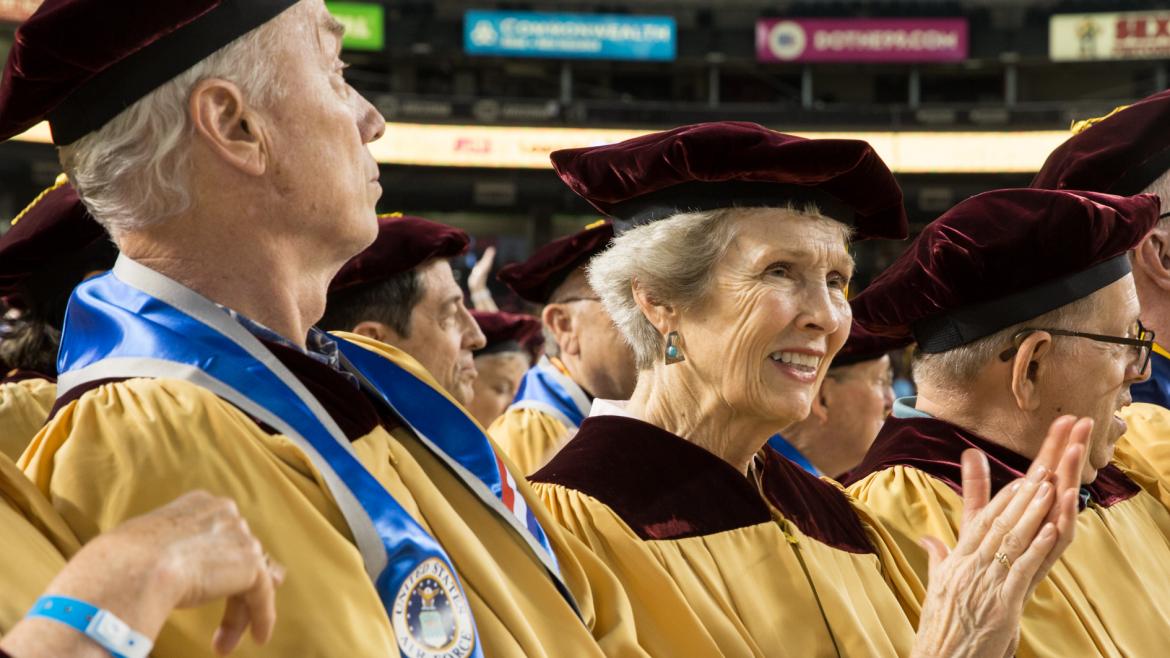 One Golden Grad's story: A single mom in a different era

Antonia Oliver earned her engineering degree from ASU in 1968, working weekends and bringing her toddler daughter to class

Every year in May, the ASU Alumni Association gears up for its largest event of the year: to honor graduates from 50 years back. Though 1968 may seem like a long time ago, for a number of returning grads it feels like yesterday.

The Golden Graduates have the opportunity to reconnect over a two-day special event that includes campus tours, receptions with VIPs, a dinner prior to the graduation ceremony, recognition by President Michael Crow during commencement, and the Golden Circle induction and candle-lighting ceremony in front of Old Main.

One of this year’s Golden Graduates, Antonia “Toni” Oliver earned her undergraduate engineering degree in 1968. Her daughter Wendy was 4 years old at the time.

It was a difficult time for Oliver, but she didn’t dwell on her struggles. She was a single mom working on an engineering degree. Oliver took her math and science courses as well as the 40 hours of liberal studies that were required at the time by the university president.

She worked weekends while taking courses. At times, she brought Wendy to class where she would draw or play on a blanket in back of the classroom.

“I didn’t even consider asking permission to bring her to class. I just did it!” Oliver said.

When Oliver wasn’t able to watch her daughter, her sister, a dormitory resident assistant and ASU marching band member, would take over.

“My aunt would take me to band practice,” said the now-54-year-old Wendy. “Also, my mom would volunteer as an usher at Gammage Auditorium, so I got to see a lot of plays.”

Wendy would hang out with her mother in the computer center where her mother’s classmates would give her paper and pencils to draw pictures for them.

Oliver, who went on to have a career as a chemical engineer in Oregon and Illinois, decided that she wanted to make the trip to Tempe for the Golden Graduation.