Arizona State University is partnering with the Los Angeles County Museum of Art on a new master’s fellowship designed to increase diversity among museum professionals.

The three-year program, called the LACMA-ASU Master’s Fellowship in Art History, will combine traditional master's-level coursework and a thesis with working 30 hours a week at LACMA or the ASU Art Museum, which is part of the Herberger Institute for Design and the Arts. The first-of-its-kind program will offer mentorship between students, curators and faculty and allow students to accelerate their careers.

The new degree, to launch in August, was announced Tuesday in Phoenix where American Alliance of Museums was also holding its annual conference.

Steven Tepper, dean of the Herberger Institute, called the lack of diversity in museums a “cultural crisis.”

“We are not filling the leadership with the incredible, creative diversity of this country,” he said, noting that most diversity programs are for undergraduates but that the fellowship will be a way to fast-track people into leadership positions in the field.

LACMA Director and CEO Michael Govan said the partnership with ASU, which is committed to widening access, was a natural.

“We saw eye to eye very much about what we could do together to address some fairly large barriers to the future success and survival of art museums,” he said.

“The arts have been around for tens of thousands of years, museums for a couple hundred. It’s just a device we use to create access. So it’s no wonder that museums might be needing to change continuously.”

The first year will be a pilot program, starting with a handful of students drawn from people already affiliated with the two museums, Tepper said. Later this year, ASU and LACMA will decide how to accept future students.

The fellows, who must apply and be accepted by ASU, will travel back and forth between Los Angeles and Tempe several times a year, attending workshops and taking classes together through technology. The coursework will explore how museums can be more equitable and include a diverse range of voices and experiences. LACMA staff and Herberger faculty will offer a new course on curatorial and museum practice in the 21st century.

ASU President Michael M. Crow said that the fellowship is one of several programs that the university will undertake with LACMA, and he praised Govan for thinking innovatively.

Miki Garcia, director of the ASU Art Museum, said that the partnership will allow ASU to have access to some of the collections from LACMA, making the art available to people in the Phoenix community who might never have the chance to travel to Los Angeles.

She said she took the job of director four months ago to be a part of reinventing the museum.

“I’m the product of a pipeline initiative and mentorship, and I wouldn’t be here without that,” she said.

“I’m keenly aware of what it’s like to walk into spaces where my stories aren’t being told and I don’t see myself on those walls, and we’ll change that at ASU.”

The Los Angeles County Museum of Art, founded in 1965, is the largest art museum in the Western United States, with a collection of more than 135,000 objects spanning 6,000 years of art history.

Taking on the world

Editor’s note: This is part of a series of profiles for spring 2018 commencement. Megan McDermott admits she is an unlikely selection as the College of Public Service and Community Solutions outstanding graduate for spring 2018. She never envisioned earning a college degree, let alone a master’s degree in social work.School was a constant struggle. McDermott was diagnosed with ADHD and dysl...

Taking on the world

Megan McDermott admits she is an unlikely selection as the College of Public Service and Community Solutions outstanding graduate for spring 2018. She never envisioned earning a college degree, let alone a master’s degree in social work. 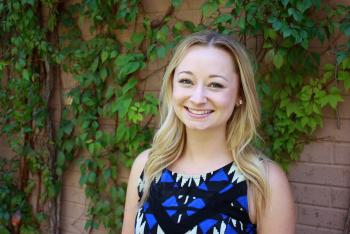 School was a constant struggle. McDermott was diagnosed with ADHD and dyslexia. Then her father passed away when she was 16 years old.

“At that point, I pretty much gave up on school,” McDermott said. “I failed, quite literally. I graduated with a 1.9 GPA.”

After high school, McDermott moved from Michigan to Arizona, where she had family.

“We used to travel to Arizona a lot when I was a kid to see relatives, and every visit we would stop by the ASU Tempe campus and I’d get an ASU sweatshirt,” McDermott remembered. “I loved ASU and always wanted to go there.”

McDermott spent her first year in the Valley working for a local pizza chain and struggling with how to make her dreams of helping people a reality. College was the last thing on her mind.

“After I’d been out here about a year, my mom begged me to just take one class at a community college, just to test it out,” said McDermott.

It wasn’t immediate, but after more badgering, she agreed to try. To her surprise, she did well.

“I signed up for one psychology class, and I got my first A,” she said. “I cried like a baby, because I had never gotten an A before.”

That success gave her the confidence to enroll in more courses. Soon she was excelling and even joined the college’s chapter of Phi Theta Kappa Honor Society, of which she later became president.

McDermott knew, however, that achieving her goals of helping people at the level she wanted meant going on to get her four-year degree. There was only one option in her mind.

“I only applied to ASU,” she said. “It was the only school I wanted to attend. For me, it was always ASU.”

ASU’s School of Social Work was the perfect fit for McDermott. Ever since high school, she had dreamed of becoming a school social worker.

“After I lost my father, I had a social worker at my school. His name is Mike Mohler, and he honestly saved my life,” said McDermott. “I saw the way he interacted with other students and how much he helped them.

“I knew if I could make an impact on one person's life the way he made on mine, then that's all I could I ask for. That’s the number one thing I wanted to achieve.”

McDermott earned her bachelor’s degree in social work. But she wasn’t done. She had bigger dreams.

“I realized I had so much energy and passion that I really wanted to tackle things on a larger policy level,” she said.

That is what led McDermott to the macro social work concentration for her graduate social work program. Someone pointed her to Barbara Klimek, an economist by training who is a clinical associate professor in ASU's School of Social Work.

“She ran the Office for Global Social Work,” said McDermott. “And where other people would look at me like I was crazy for wanting to help so many kids and at a global level, she got it.”

“Her creativity and ability to search for innovative and sustainable solutions to global problems has to be recognized,” said Klimek. “For Megan, ‘The sky is the limit,’ and she will find a way to get there.”

Under Klimek’s guidance, McDermott thrived as an intern in the Office of Global Social Work, and her dreams of making a global impact are already coming to fruition. She took a trip to Nepal to work with the Global Network for Sustainable Development. There, she connected with a local orphanage and discovered beautiful beaded necklaces the orphanage wanted to sell but did not know how to.

“I asked if they would trust me to take 200 of the necklaces back to Arizona to sell them and send back the money,” said McDermott. “They were so excited. We were able to sell many of them at the Global Market.”

McDermott and fellow MSW student and Office of Global Social Work intern Alyaa Al-Maadeed created the Global Market as a project for their degree program. What began as a one-day pop-up for local refugee women to sell their wares blossomed into a monthlong pop-up store and professional development initiative in the heart of downtown Phoenix. The School of Social Work collaborated with the City of Phoenix and local refugee organizations to make it happen.

“It was incredible,” said McDermott. “We're actually trying right now to do another one.”

McDermott also kept her word to the orphanage in Nepal. So far, she has sent back $1,600 in profits from the necklaces. And she recruited sponsors to pay the costs of providing education to each of the 16 orphans for an entire year.

McDermott says she would love nothing better than to see kids around the world have a home, food to eat and access to education.

“We would see these kids living on the streets with no shelter, no food,” McDermott said about her experiences in Nepal. “I saw kids as young as 6 smoking cigarettes — someone said they do it to curb their hunger. So, the first thing I would do is make sure every child in the world had a safe home and get them fed.”

While McDermott is unsure what is next in life, she knows what she would tell herself as a teenager who thought college wasn’t an option.

“I’d say don't be scared to take advantage of any opportunity that comes your way,” McDermott said. “I think a lot of times my nerves or doubts I had in my abilities hindered me.”

Once McDermott was able to put those insecurities aside, she was able to excel and embrace her journey. 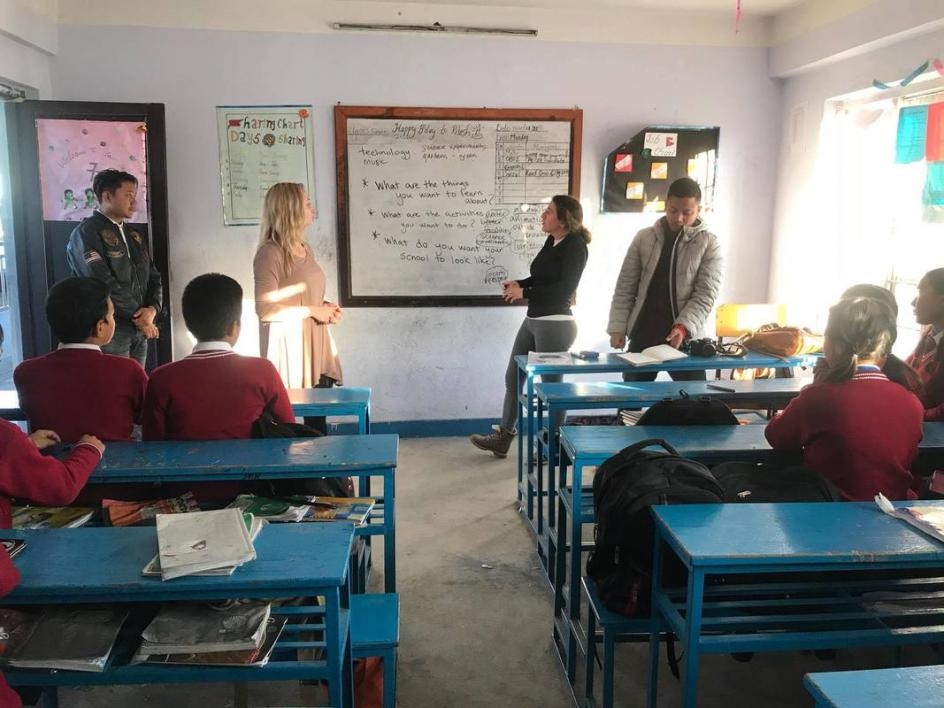 Megan McDermott traveled to Nepal with the Global Network for Sustainable Development to help establish a sustainability for peace club. McDermott worked with Nepalese students on a cleanup campaign and collected trash throughout the town. 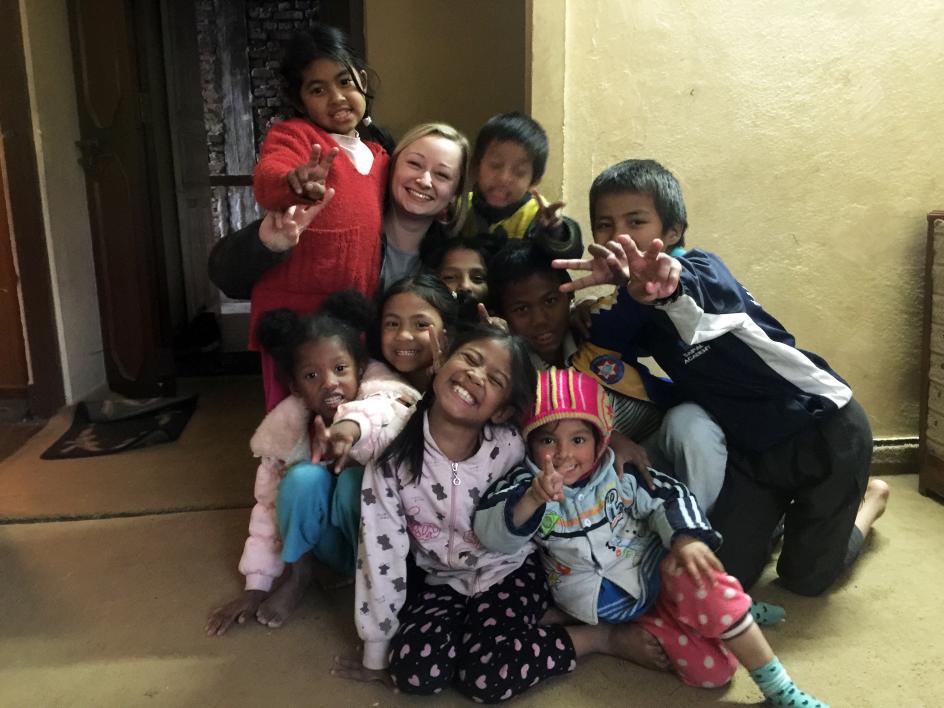 McDermott with children from the Nepalese orphanage she connected with on her trip. 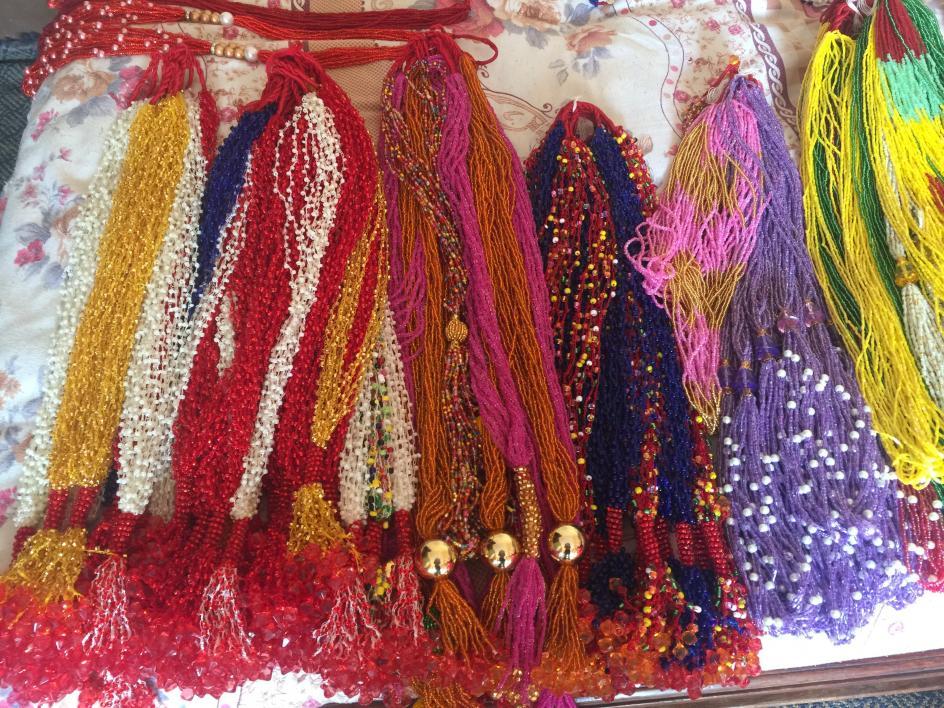 Some of the 200 colorful, beaded necklaces made at the orphanage in Nepal. 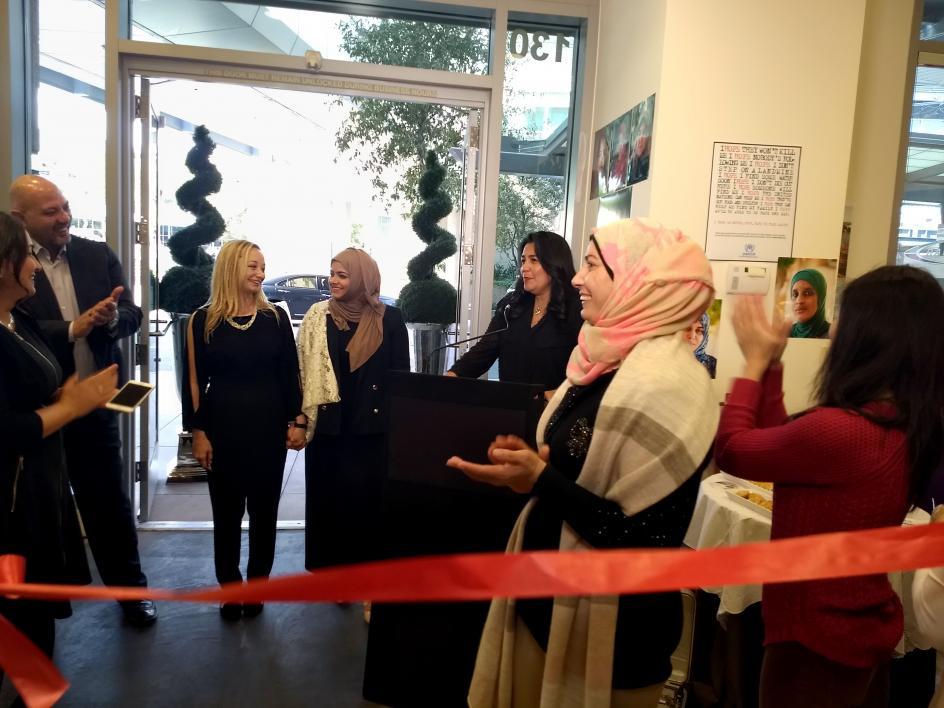 McDermott and fellow MSW student Alyaa Al-Maadeed stand hand in hand at the grand opening of the Global Market pop-up store, as they are recognized by Phoenix City Councilwoman Laura Pastor. 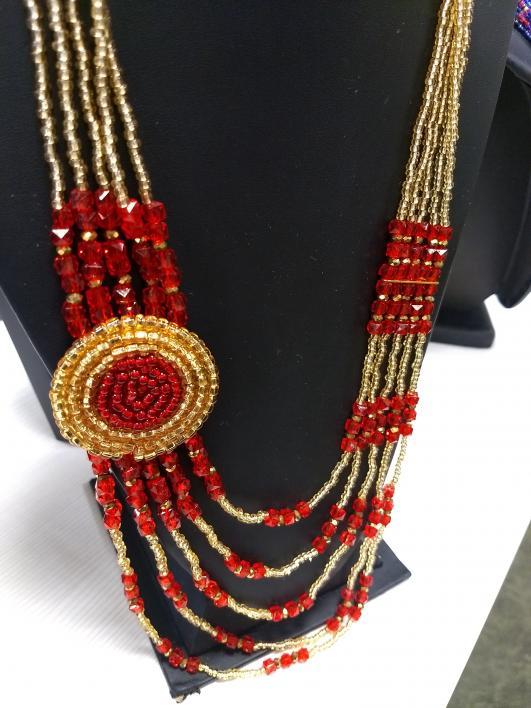 A red and gold beaded necklace from Nepal is displayed at the refugee pop-up Global Market.

“Each person goes through hard times, and how we handle them shapes our lives and our future,” said McDermott. “Every bump in the road has gotten me to where I am today.” 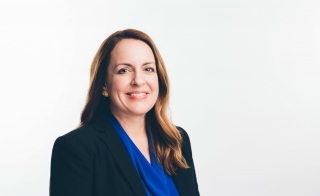