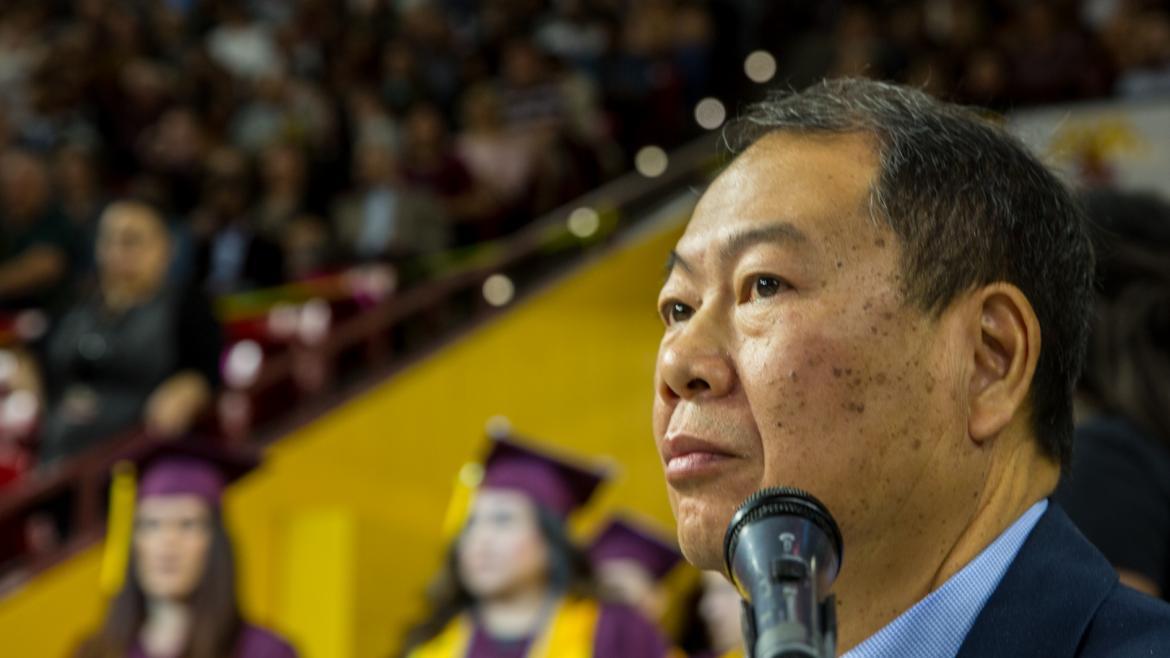 The voice of ASU graduation

Mike Wong, director of career services at the Cronkite School, helps students launch into post-college life in more ways than one

Mike Wong is always there for Cronkite school students, and he has been for over 30 years.

After several years’ experience in radio and television news as a producer, he took the opportunity to teach some courses at the then-named Walter Cronkite School of Journalism and Telecommunication. Wong continued to progress with the school and most recently has guided students to exciting post-graduation paths in journalism as the director of career services at the Walter Cronkite School of Journalism and Mass Communication.

But Wong is also there for all Arizona State University students — at least during graduation. For over a decade, Wong has been the voice of university commencement ceremonies.

He started his career working as a radio announcer at KTKT top 40 in Tucson while studying one year at the University of Arizona. (Ignore that tidbit, Wong said: “Yes, I am a Sun Devil and I bleed maroon and gold.")

“Did I want to be an announcer? Kind of. You know, I grew up with Casey Kasem and the American top 40," Wong said. "I was in a few church plays as the narrator; after the performances parents would come up to me and say, ‘You should do that, you sounded pretty good,’ and that kind of inspired me to pursue it.”

His part-time ASU voice career started with auditioning for Sun Devil Athletics to announce a variety of different sporting events.

“I had an audition at Wells Fargo Arena, because I was interested in sports and wanted to be a public-address guy. They asked me if I could do this sport or that sport, so that was the start of my announcing career,” he said.

About 15 years ago, Christopher Callahan dean of the Cronkite School wanted to do something special for the school’s spring graduation ceremony and asked Wong to announce. Commencement producer Melissa WernerWerner is director of university ceremonies and protocol officer at ASU in the Office of University Events and Protocol. heard him at that event and asked him to repeat the gig for the university the following fall. He has been doing it ever since.

It's always a special day for Wong.

“I am flattered to be able to help out the university in this unique way. It’s so special to see the students walk across the stage," he said. “I always get a little butterfly in my stomach before announcing, but I have a very capable producer, Melissa Werner. She coaches me; as long as I have a road map, I am fine.”

Wong has had many Cronkite School students come up to him after the ceremony to thank him for being a part of their academic career and for helping them get a job. Most don’t realize he was part of their graduation day as well.

For the 18th year in a row, students at Arizona State University’s Walter Cronkite School of Journalism and Mass Communication dominated the regional Society of Professional Journalists’ Mark of Excellence Awards competition.Cronkite students won 41 awards, one more than the combined total of the second-place, third-place and fourth-place schools in the SPJ Region 11 Contest. They took home 13...

For the 18th consecutive year, Cronkite School students have prevailed at the regional Society of Professional Journalists’ Mark of Excellence Awards competition

For the 18th year in a row, students at Arizona State University’s Walter Cronkite School of Journalism and Mass Communication dominated the regional Society of Professional Journalists’ Mark of Excellence Awards competition.

Cronkite students won 41 awards, one more than the combined total of the second-place, third-place and fourth-place schools in the SPJ Region 11 Contest. They took home 13 first-place awards and 28 finalist honors. 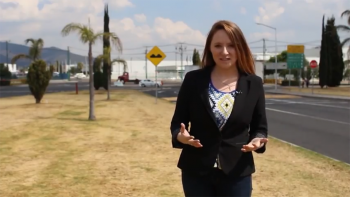 Cronkite student Lillian Donahue was among the winners in the Society of Professional Journalists’ Mark of Excellence Awards competition for Region 11. Download Full Image

Over the past decade, Cronkite students have tallied 458 awards in the contest, the most of any journalism program in the region, which includes Arizona, California, Guam, Hawaii, Northern Mariana Islands and Nevada.

“We’re very proud of our students and the faculty who guide them,” said Kristin Gilger, senior associate dean of the Cronkite School. “They consistently produce work that not only wins contests but informs and educates readers and viewers all over the state and region.”

Students also were recognized for “Querétaro: Promise of Prosperity for Mexico,” a multimedia reporting project that examined the complicated relationship between the U.S. and its southern neighbor. The project, which sent 20 students to one of the smallest states in Mexico, won in the broadcast news videography category and was a finalist in two other categories.

“Hooked Rx: From Prescription to Addiction” took two awards — in online news reporting and online in-depth reporting — for an examination of the growing opioid epidemic in Arizona. The project included a dozen digital stories as well as a documentary that aired on all major broadcast TV stations in the state and reached 900,000 people.

ASU’s student-run media organizations also performed well in the contest. The Downtown Devil, an online publication focused on Phoenix and the ASU Downtown Phoenix campus, was named the best independent online student publication and had two finalist honors in online opinion and commentary. The State Press, ASU’s student news outlet, took first place in online opinion and commentary and was a finalist in online/digital sports videography and sports column writing.

The Society of Professional Journalists is the nation’s most broad-based journalism organization, dedicated to encouraging the free practice of journalism and stimulating high standards of ethical behavior. Founded in 1909 as Sigma Delta Chi, SPJ has nearly 10,000 members.

Finalist: Megan Janetsky and Johanna Huckeba, “Mexicans work to reclaim corn as their own,” Querétaro: Promise of Prosperity for Mexico

Finalist: Cassie Ronda, “Opioids and the body: the science of an overdose,” Cronkite News

Finalist: Sophia Kunthara, “NAFTA changes would affect both sides of the border,” Querétaro: Promise of Prosperity for Mexico

Finalist: Paul Slobodzian, “ASU football should be able to attract top recruits; Phoenix is not the place to be for seasoned sports fans; CTE will be the end of football,” The State Press