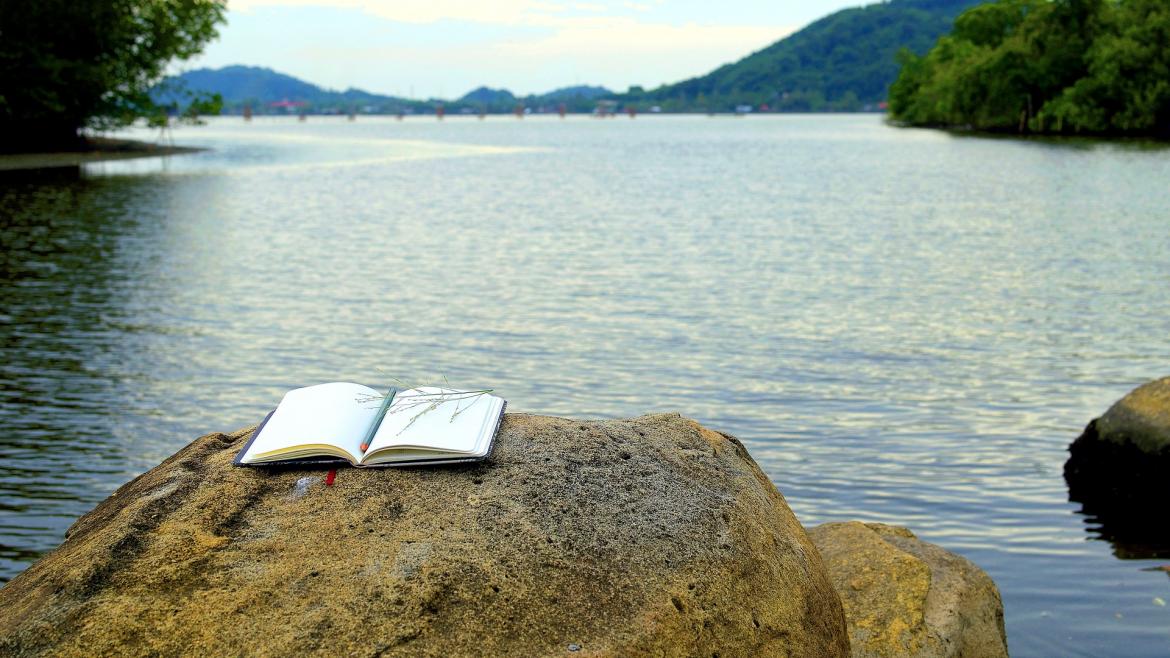 To have Joni Adamson tell it, these are exciting times for the environmental humanities. And she should know: Adamson, a professor in the Department of English and senior scholar at the Julie Ann Wrigley Global Institute of Sustainability at Arizona State University, was recently awarded a highly sought-after fellowship from the National Humanities Center and is now looking forward to advancing her work in this realm.

Adamson, whose work explores the intersections between literature and the environment from the perspective of environmental justice, has been tapped to receive the Benjamin N. Duke Fellowship of the Research Triangle Foundation. She is working on a new book that aims to trace the origins of human thinking on climate.

An integral contributor to the Humanities for the Environment (HfE) project based at ASU, Adamson has been invited to a two-day summit in June at the Rachel Carson Center in Munich with colleagues from 20 countries who will discuss the future of the environmental humanities.

Adamson recently spoke about her fellowship, her work and research plans with ASU Now.

Question: Congratulations on receiving the National Humanities Center Fellowship. Tell us a little bit about the work that got you to this place. What does this mean for you as an academic?

Answer: In 1993, I was one of a group of graduate students who gathered to form an organization focused on environmental issues. None of us could predict then that 20 years later, the Association for the Study of Literature and Environment (ASLE) would become what it is today — the largest alliance of scholars working in nature-focused humanities in the world and a catalyst to the formation of what is now known as the environmental humanities. I was honored to be elected as president of this organization in 2012. My recent publications have explored global indigenous literatures and scientific literacies, the intellectual genealogy of the environmental humanities, and American Southwest cultures, foods and ethnobotany.

I believe this award from the National Humanities Center recognizes not only my work but the increasing significance of the environmental humanities and I’m very honored and grateful. This fellowship will provide me with the time to finish a new monograph I am writing about the origins of human thinking about climate, which I trace back to ancient Greek, Roman and American almanacs and indigenous cosmologies and then forward to the latest addition to this canon, the recently popular genre of climate fiction, or “cli-fi” for short. 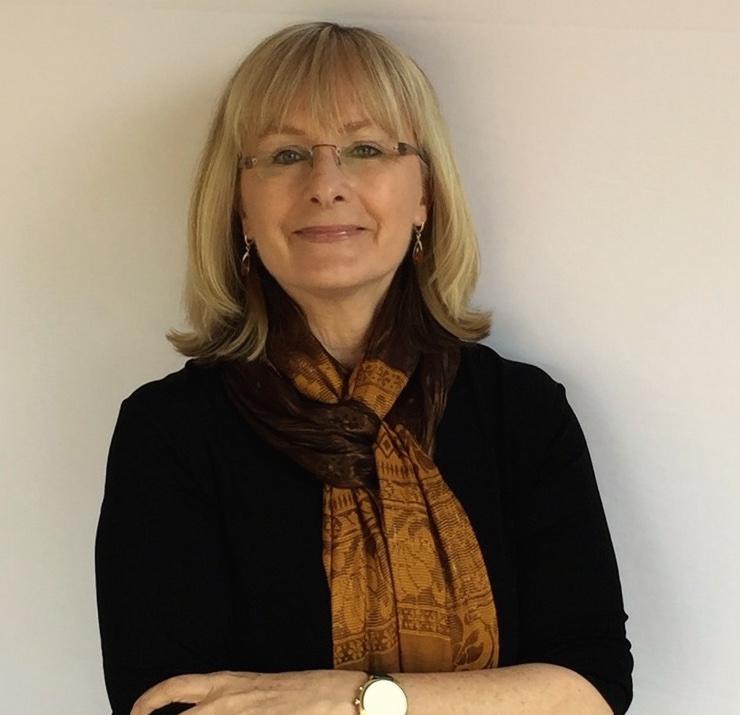 Q: How would you describe the book you are working on for your fellowship? What do you hope the takeaways will be once it is complete?

A: My book, tentatively titled “Desirable Futures: Cosmos, Canon, and New Constellations of Practice in the Environmental Humanities,” traces the cosmological roots of the environmental humanities to the journey of celebrated Prussian artist, geologist and surveyor Alexander von Humboldt who spent four years in the Amazon in the early 19th century. He came to reconsider everything he thought he knew about “nature” after studying indigenous Amazonian cosmographies that narrate the relationship of humans to their “kin,” the animals, plants, landforms, winds and waters. This is where we find the cosmological roots of a new research direction in the environmental humanities called “multispecies ethnography” that is exploring human-nonhuman relationships.

Humboldt wrote the best-selling five-volume work “Kosmos” (1845-62), which made him something of a “rock star” in his day and attracted an intellectual network that included Charles Darwin and later Henry David Thoreau and Zora Neale Hurston, among many others. I am exploring how these writers began deploying Humboldt’s ideas about nature in ways that not only became foundational to the environmental humanities but began contributing to what I am calling a “climate canon.”

Q: Climate change and the environment have increasingly become “hot topics,” so to speak, in popular culture over the years. Why do you think this is so? And how has work in the humanities helped to bring these topics to the fore?

A: Ever since Hurricane Katrina made landfall in 2005, leading newspapers and magazines, including The New York Times and Slate have been asking if cli-fi might play a role in shaking the public out of what has recently been called “climate silence” or climate denial. In my book, I will examine cli-fi as the latest addition to the “climate canon.” Some well-known examples of this emerging genre include Roland Emmerich’s film “The Day After Tomorrow” (2004), Nathaniel Rich’s “Odds Against Tomorrow” (2013) and Paolo Bacigalupi’s “ The Water Knife” (2015).

In the classes I teach, I have found there are ways to read dystopian cli-fi novels in ways that can inspire and motivate students to get involved in actively designing their own futures. I ask them to read novels that narrow the focus on climate change to one issue, the future of food. We read “Make Room! Make Room!” (1966) and watch its film adaptation, “Soylent Green” (1973). We also read Paolo Bacigalupi’s novel, “The Windup Girl” (2009), which he describes as “deliberately dystopian.” He wants readers to ask, “Do we want the future to be dystopian?” “How can we take action now to avert apocalypse?”

To learn about what we can and are doing now, I ask my students to think of the ASU campus as an “urban laboratory” where we will research the design of desirable futures. We explore ASU’s sustainability “points of pride,” including underground cooling systems, shade structures and solar arrays. We learn ASU is an “edible campus” where harvestable foods are collected for campus dining.

On ASU’s Palm Walk, for example, we gain a much better understanding of Bacigalupi’s fictional seed searchers, as we learn about the critical place of ASU’s date palm collection (located at the Polytechnic campus) in the history of seed saving and conserving and preserving the world’s most nutritionally dense and culturally important foods. The date becomes an inspiring example of what humans are doing now to design desirable food futures.

Q: What would you say is a humanist’s most important role in the discourse about the environment?

A: The most important role that humanists play is raising awareness of the stake that everyone has in searching for answers to the central environmental questions of our time. Environmental humanists cultivate thoughtfulness about what it means to take our obligations to future generations — human and nonhuman — seriously. They argue that solving or mitigating the most serious problems associated with environmental change will require collective, creative effort that engages political and economic elites and understands humans as diverse individuals and groups who frequently disagree about values, means, and ends. Building a desirable future will require shifts in the routine behavior of general populations, especially in carbon-rich countries. For this reason, environmental humanists are fostering conversations and collaborations that advance understanding of earth systems, new technologies, economics and policy while exploring insights from the humanities about the cultural components that led us to this moment in time.

Editor’s note: This is part of a series of profiles for spring 2018 commencement. Melody Pierce knows the power of storytelling.When she graduates May 7 with her bachelor’s in journalism and mass communication with a public relations emphasis from the Walter Cronkite School of Journalism and Mass Communication, she will make a career of giving others a voice through their stories.But along ... 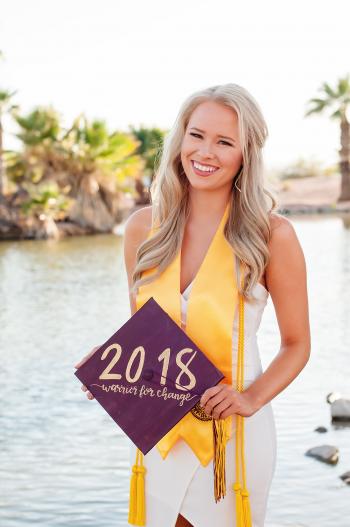 Melody Pierce is a 2018 ASU graduate and advocate for those with eating disorders and mental illnesses. Photo courtesy of Melody Pierce Download Full Image

When she graduates May 7 with her bachelor’s in journalism and mass communication with a public relations emphasis from the Walter Cronkite School of Journalism and Mass Communication, she will make a career of giving others a voice through their stories.

But along the way, she has shared her own story in hopes that her voice will help others.

At age 10, Pierce began having eating disorder thoughts and was diagnosed at age 16. She began treatment soon after and has been in recovery since.

“I went through the journey and came out on the other side,” Pierce said. “It’s a choice in recovery to wake up and fight.”

Now, she is recognized locally and nationally as an eating disorder advocate — sharing the good and bad days, helping others realize they’re not alone and inspiring them to keep fighting.

At ASU, Pierce served as president of the ASU Eating Disorder Recovery and Awareness club and was an active board member for Recovery Rising, an organization that supports students in recovery.

Outside of ASU, she is on the planning committee for the annual National Eating Disorder Association Walk and a board member for the Andy Hull Sunshine Foundation for suicide prevention and awareness.

She is also involved with the Miss America Organization, where she is currently Miss Arcadia and will compete for Miss Arizona in June. She used her Miss Arcadia platform, S.T.E.P.S.S.T.E.P.S. stands for Support, Talk, Educate, Prepare and Strengthen. Toward Eating Disorder Recovery and Awareness, to develop a curriculum to educate fourth- through sixth-graders about eating disorders and body positivity.

With her passion and talent, Pierce will continue to make an impact through the power of storytelling through sharing her own story or giving voice to others who have their own experiences to share.

Answer: I have always been interested in storytelling, but it wasn't until I realized that there are so many voices who are not being represented that I knew I wanted to major in journalism. I went the public relations route with my degree with the hope to give a voice to nonprofits and all of the dreamers and doers of Arizona by getting them the earned media they deserve.

A: Everyone has a story.

A: The Walter Cronkite School is one of a kind. I realized very quickly into my college career that this program (produces) some of the most outstanding professionals in the journalism industry, so I knew that was something I had to be a part of.

A: Find your community. Getting involved with Recovery Rising, the Miss America Organization and ASU Eating Disorder Recovery and Awareness were the best decisions I've ever made. Having that support system behind you on the good and bad days is what will truly push you through getting this degree and being successful in the long run.

A: Any Starbucks. I am a major coffee addict — I blame my degree — and if I'm not in class, you can probably find me in or around a Starbucks.

A: I have accepted a position as an account coordinator at The Knight Agency in Scottsdale. I will also be competing for Miss Arizona in June.

A: Eating disorders! I'm sure that goes without saying now that you've read all of this, but eating disorders are the deadliest mental illness and continue to receive little to no funding. I would use that $40 million to join with one of my favorite nonprofits, Circles of Change, here in Arizona to help fund community members’ recovery. The average treatment stay can cost a family more than $50,000, so I would like to provide a treatment sponsorship program to individuals because everyone deserves recovery and to be free of this disease.