First-gen ASU grad has the world on a string

Hailing from Kirksville, Missouri — a small, tornado-prone city on the Midwestern plains — Trevor Harcrow graduates this semester from Arizona State University with a bachelor’s degree in English (linguistics) and a certificate in teaching English to speakers of other languages (TESOL). 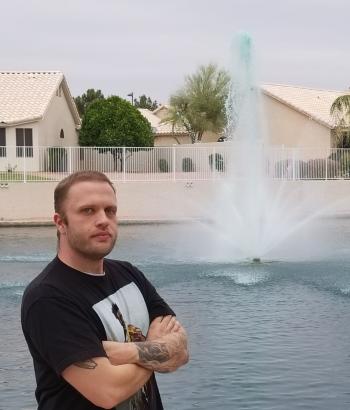 "One thing that I learned, rather really confirmed, was that no matter what the task is in front of me, I can achieve success so long as I put my mind to it," said ASU student Trevor Harcrow, who is the first in his family to graduate from university. Download Full Image

You can’t trace a direct line from his beginnings in that green, humid environment to this brown, dry one, however; Harcrow also spent several years in the U.S. Navy, where he traveled extensively.

He will become the first in his family to graduate from university. This doesn’t mean Harcrow hasn’t done a lot of learning elsewhere, though: His experience in the Navy also opened his eyes to the wider world. Having lived and/or worked in more than 30 countries, he hopes to continue learning and teaching overseas after graduating.

Harcrow interned this semester as a second-language tutor for the Department of English’s writing programs, helping non-native speakers through required English courses. His military-honed work ethic has made him a standout in his classes and internships alike.

“He shines as a student in my courses,” said Ruby Macksoud, an instructional professional who directs the Department of English’s internship program, “and his life experiences have helped other students to think outside of the box.”

Harcrow answered a few questions about his inspirations and plans for post-graduation.

Answer: My "aha" moment was on April 5, 2012. I had just gotten out of the Navy and was traveling in Europe with some friends who also recently gotten out. I was driving our red Mini Cooper D rental down the highway on the outskirts of Stockholm, Sweden, contemplating my life. I was looking at the clouds in the sky asking myself what I wanted to do with my life, and all of a sudden it hit me. From that day forward, I have dedicated myself to teaching English abroad, whether that is just helping friends improve their conversational English, writing letters to pen pals for practice, or in a formal academic role (which is why I chose to study at ASU).

A: One thing that I learned, rather really confirmed, was that no matter what the task is in front of me, I can achieve success so long as I put my mind to it. Being the first of my family to graduate from university, it was a daunting task in and of itself, but while taking 18-plus credits a semester, working full-time and taking care of home responsibilities, I really tested myself, but I rose to the challenge and here I am crossing the finish line.

A: I chose ASU because I recently moved to Arizona (for work) and heard nothing but great things about the veteran center. Pat Tillman had a profound impact on the lives of Arizonans, and being prior military I wanted to be a part of that.

A: Stick with it no matter what! While it may seem impossible to you at the time, it will be even harder if you stop. Just like life, there will never be an opportune time to do something, so when things get rough just dig your heels in and always keep moving forward. Life won’t stop for you, so why should you stop for life?

A: Most of my time was spent either in the G. Homer Durham Language and Literature building or in Hayden Library. I didn't have a dedicated spot that I would hang out at, but rather on nice days I would just walk around and sit on the benches enjoying the weather (when it wasn't 110). ASU's campus is really pretty, and there are a ton of little hidden gems to see, but you will only find them if you explore.

A: My immediate plans after graduation include volunteer teaching here in the Valley. My long-term goal is to teach abroad, but being a fresh graduate I want to gain in-field experience first. Also, I have not explored nearly enough of Arizona, so I would like to take a year seeing the sights that the state has to offer before moving on to the next chapter of my life.

A: I would use this money to help fight against the growing problem of plastic in our oceans, as well as just the general pollution of our planet. We only have the one planet.

Editor’s note: This is part of a series of profiles for spring 2018 commencement. Finding ways to integrate and apply new knowledge is something ASU Polytechnic campus senior Paul Horton has always found exciting.Horton, who is graduating in May 2018 with an applied physics major from the College of Integrative Sciences and Arts and a software engineering major from the Ira A. Fulton Schools ... 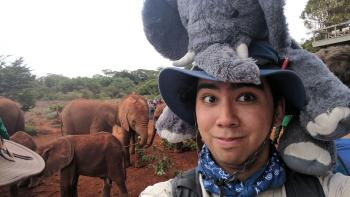 Paul Horton taught in the village of Talek, Kenya, in summer 2017. Above, Horton visited the elephant orphanage in Nairobi. Download Full Image

Horton, who is graduating in May 2018 with an applied physics major from the College of Integrative Sciences and Arts and a software engineering major from the Ira A. Fulton Schools of Engineering, was first drawn to the fields of computer science and physics his senior year at Salpointe Catholic High School in Tucson, Arizona.

“The teacher who taught physics also taught the engineering class where I learned to program,” said Horton. “When I began using my programming skills to set up scripts to calculate my physics homework, my teacher was both annoyed and amused with my approach to assignments, but encouraged me to keep practicing both fields.”

He has done just that at ASU’s Polytechnic campus, where Horton has also been a student in Barrett, the Honors College.

“I initially started out thinking I’d do physics as a minor to my software engineering major. But having quickly finished my minor, I realized I wanted more science in my education and applied for dual degrees shortly after the new applied physics option was added at Poly,” explained Horton, who is the first student to graduate with the applied physics degree in the College of Integrative Sciences and Arts.

That decision and the additional coursework he took have set the course for his career.

“Once I began combining my two passions, I realized that data science in physics is where I belong,” said Horton, who will be working this summer as an intern at NASA’s Jet Propulsion Lab in Pasadena, California.

“At JPL I’ll be creating a machine-learning, image-recognition system to classify changes on the surface of Mars,” he said. “This system will run on satellites around Mars and optimize which images we choose to send from the red planet.”

In the fall he’ll return to ASU’s Polytechnic campus to complete a master’s degree in software engineering.

“During my master’s year, I’ll work in ASU’s astronomical instrumentation lab to optimize algorithms used in conducting all sky surveys,” he said. “After finishing my master’s, I hope to pursue a doctorate in astrophysics with a focus in data science.”

Question:  What’s something you learned while at ASU — in the classroom or otherwise — that surprised you, that changed your perspective?

Answer: Through my software engineering major and my involvement in Barrett, the Honors College, I got to travel around the world to work on education projects. In particular, I visited Tonga and Samoa to implement Solar Powered Educational Learning Libraries (SolarSPELLs) in local schools with the help of Peace Corps volunteers. Last summer, I also taught at a primary school in a small village in Kenya.

Visiting classrooms in the South Pacific and Kenya made me aware of the lack of information access in the developing world. Being able to look up an answer in a textbook or on the internet is a luxury that not all students have. On these trips, students bombarded me with questions about science and astronomy, hungry for answers. It was humbling to experience this disparity in information access, and it changed my perspective.

A: I chose ASU and the Polytechnic campus because of the hands-on education that Poly’s degrees offer. Software engineering at ASU is very different than computer science anywhere else, due to the project-based learning courses. This aspect of the degree allowed me to guide my own education and incorporate physics into my software classes.

A: ASU has incredible opportunities for students to work on projects both on campus and around the world. I’ve noticed that many students don’t take advantage of these opportunities, perhaps due to worries about funding or not having enough knowledge. Professors at ASU love to help students get involved on the projects they’re working on. They will work with you to ensure that you have the funding and the knowledge you need to succeed on your project. I would highly recommend finding projects at ASU that interest you and seeking out the professors in charge, to learn more about how to get involved.

A: My favorite spot on campus is the couch on the third floor of Santan Hall. It’s not the best couch in the world, but it’s the location that counts! I would often go up there in the middle of the night to work on assignments or just relax and look at the stars — which are more visible in the night skies at Poly, being on the edge of metro Phoenix. It’s also an incredible spot to watch the monsoons in the fall semester.

A: While I doubt $40 million would completely fix the problem, I would tackle the information-access gap in the world. Having knowledge readily available around the world would give global educators the resources they desperately need to teach and give learners a reliable means to answer their own questions.