Global studies majors focus on the globalized world and traveling to learn about the problems we face. Emily Gough is a senior at ASU studying global studies and women and gender studies; thanks to the Barrett Global Explorers Grant, Gough was recently able to conduct research across three different countries.

After completing a capstone project in high school on postcolonial literature, Gough gained an interest in indigenous theory. Wanting to continue her research on indigenous rights, Gough focused on Australia and its indigenous population for study abroad.

“I found and applied to this club called Walama Muru that centered on promoting reconciliation between nonindigenous and indigenous people in Australia,” said Gough when recalling making the most of her time studying abroad.

This experience cemented Gough’s desire to continue working with indigenous rights, leading her to apply to the Barrett Global Explorers Grant.

The application process for this grant is, as Gough called it, “arduous.” It includes writing a five-page proposal explaining the topic; if the applicant makes it to the final round of five applicants, they must submit a 10-page proposal and interview with a panel of ASU faculty.

“This is an issue I feel extremely passionate about and hope to continue working on after I graduate, so to be able to get this award really meant the world to me,” said Gough.

After receiving her grant, Gough traveled to Canada, Norway and New Zealand. As this trip meant traveling around the world alone, Gough had to manage travel, lodging, and meetings with experts on her topic.

“I also had to overcome some of my own fears and stresses regarding reaching out to people and asking for help,” explained Gough. “For me, just calling and emailing people that I had never met before to explain what I was doing and ask if they would mind me interviewing them was definitely quite stressful.”

Gough has some advice for those who are planning to apply for this grant: plan ahead: “Planning is key. The more research you have done and the more contacts you have in these places, the easier your life will be both in competing for the award and when you actually get abroad.”

After graduation, Gough plans on attending law school. She hopes to earn her JD with a concentration in indigenous rights. As she studies for the Law School Admissions Test, she’ll also be working as an au pair in Italy.

Reflecting on her journey, Gough had one last thing to say: “It was stunning and something that I do not think I will ever get to experience again, so to have that opportunity is unforgettable.”

Twins match each other with outstanding grad awards

Editor’s note: This is part of a series of profiles for spring 2018 commencement. Meet Austin and Daniel Cotter, possibly better known as the Wonder Twins. The graduates from Arizona State University’s School of Life Sciences each received Outstanding Student of the Year awards in their respective concentrations.Austin won the award in neurobiology, physiology, and behavior while Daniel won... 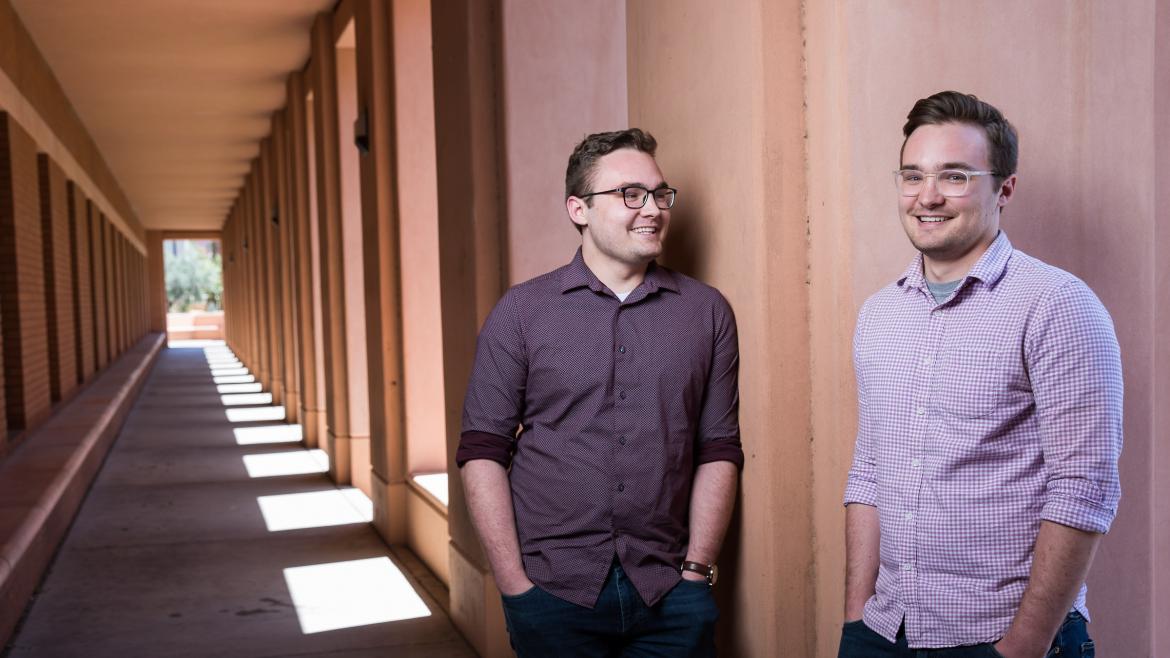 Twins match each other with outstanding grad awards

Meet Austin and Daniel Cotter, possibly better known as the Wonder Twins. The graduates from Arizona State University’s School of Life Sciences each received Outstanding Student of the Year awards in their respective concentrations.

Austin won the award in neurobiology, physiology, and behavior while Daniel won in genetic cell development.

The 22-year-old Phoenix natives both are headed for careers in medicine.

After graduation, Austin will be spending a year abroad in Spain on a Fulbright scholarship teaching English, then returning for medical school at the University of Arizona’s Phoenix campus. Daniel plans to pursue a PhD in genetics at Stanford.

They credit Barrett, The Honors College, as the draw to attend ASU.

“We toured Barrett and really enjoyed it,” Daniel said. “And in-state (tuition) is nice because the cost is lower. I still really liked the program, so it worked out for me.”

Daniel: I joined a lab freshman year, just to get some experience. I didn’t really know what I wanted to do with it, but I knew I wanted some research experience because I was in biology. … About two years in I was working on publishing a paper with another undergrad and my (principal investigator). I did this — I created something novel for the field. That’s when I switched my major from just biology to biology with an emphasis on genetics. That’s when I decided to pursue that path of genetics.

Austin: Coming into ASU I chose biology because I like science but I wouldn’t say it was an aha moment. … I had the opportunity to donate bone marrow my sophomore year. After that, I changed my stance from "I like science and researching" to "I can use science and knowledge of medicine to actually help people." I got to see the doctors interacting when they did my bone marrow surgery. That was really meaningful to me, how easy they made my surgery. I also want to have meaningful relationships with people in my career, and that was my aha moment when I realized I want to study medicine.

Austin: Living in Barrett with a variety of different people and different majors, I got to learn about the really diverse group of people here at ASU. The diversity of people, why they are here, whether they’re pursuing business, whether they’re pursuing engineering, and why … it was eye-opening to me the variety of reasons people are here at college in the first place.

Daniel: There have been little moments but one that immediately comes to mind is I’m in a positive psychology class right now. It’s not necessarily exactly for my major but I grabbed it to do my psychology minor. This whole class is about being the best you can be in life. I’m trying to take away being competitive getting into grad school and getting the best job isn’t going to be as important to me. What I’ve really understood is that being happy in the moment and having meaningful relationships with people and trying to optimize myself in whatever situation I’m in is more important that getting accepted to Harvard or getting a 4.0 GPA.

Austin: Look for research opportunities, any opportunity outside of the classroom. That’s one of the best things you can find at ASU. There are professors you can do research with, there are internships. I think I learned a lot outside the classroom: I learned a lot through mentorship and the activities I did hands-on in a lab. Obviously you can learn, but take what you learn and apply it something, because that’s when you’re going to learn the most.

Daniel: What I found was you shouldn’t do what you think your future career wants you to do. You should do what you find enjoyment in. I work in Gammage, for instance. It’s just a job to make money, but I enjoy theater, and I don’t really have an outlet for that as a biology major. … That’s brought me more enjoyment than joining a club tailored to pre-med students because I think that would help my application to med school. Tailoring yourself to what you enjoy rather than an application has made me a thousand times happier than joining every club I think I should join.

Daniel: I really liked the bottom floor of Hayden (Library). I know it’s not pretty, but that’s where I could go to study and it was open and available. I had a lot of friends on campus and we’d just meet there to study. I could go and focus and still have friendships.

Austin: I really do like Gammage, the lawn outside — I’ve sat there just reading. When there’s not a bunch of buses going by it’s really quiet and nice to sit there.

Daniel: At TGen, the lab downtown, they study childhood diseases and stuff like that. They rely mostly on private donations. I feel research like that is the way to realistically solve problems in the future. That’s one of the reasons I chose science in the first place. I’d probably throw that money at various diseases that could feasibly be solved by $40 million.

Above photo: Twin brothers Daniel (left) and Austin Cotter pose for a portrait on the Tempe campus on April 17, 2018. Both brothers are biological sciences majors with Daniel specializing in genetics, cell and developmental biology and Austin in neurobiology, physiology and behavior. Photo by Deanna Dent/ASUNow