Arizona State University student Ryan Lee graduates this spring with a bachelor’s degree in English (linguistics); in some ways, this has always been his path. He has had a love of words his whole life — his friends used to call him a “walking dictionary” — and he thrilled to rigorous language research once introduced to it. 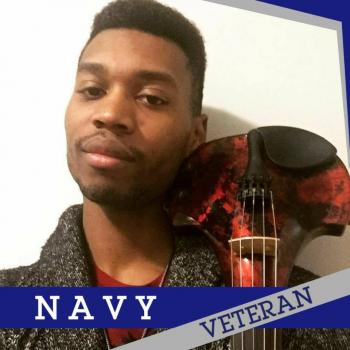 Graduating ASU student Ryan Lee, a U.S. Navy veteran, poses with his violin, which he says he used as a "coping mechanism" when feeling lost after leaving the service. Download Full Image

A U.S. Navy veteran, Lee’s interest in linguistics was further piqued during international deployments to Greece, Turkey, Dubai, Bahrain, Oman and France. At ASU, he studied Japanese and had the opportunity to survey languages like Kabardian and Old Egyptian in his upper-division course work.

French author Marcel Proust said: "The real voyage of discovery consists, not in seeking new landscapes, but in having new eyes.” Lee’s experience certainly bears this out: combine military travel with ASU language training and an appreciation for diverse cultures and voila! A linguist is born.

Hoping to become an international liaison, Lee won’t return to his hometown of Rialto, California, after graduation but instead will remain in the Valley of the Sun to attend the Thunderbird School of Global Management at ASU.

We asked Lee a few more questions about his time at ASU and plans for the future.

Answer: Once I had traveled abroad, I knew that I wanted to be in a field that would allow me to expound my word knowledge, learn languages and travel frequently. When I began to show affinity for learning languages in college, I was introduced to linguistics as a field of study. It encompassed everything that I was looking for, and that's when I had my "aha" moment.

A:  When I took “English in its Social Setting” with Patricia Friedrich at ASU’s West campus, it completely changed my mind about the English language. It demonstrated the importance of why it is better to describe and observe language than to correct the way that a person speaks. I learned about the dialectical variations of the English language and how language works in modern society. A few classmates and I were led to research in political discourse and applied linguistics in the following semester, and analyzed the impact of technology and language in modern political discourse. [This] led me to study even more words, which I thoroughly enjoyed.

A: I chose ASU to further my academic endeavors because of the number of programs and the number of foreign languages that I could study. I had been out of the U.S. Navy for about a year and was finishing my associate's degree at a community college in Virginia. I wanted to escape the cold and my family was back West and was looking to move again. I had a friend who was a student and needed a new roommate around the same time, so I drove from Virginia to ASU after I got accepted and could not have made a better decision.

A: My favorite spot on campus is definitely the [Durham] Language and Literature building (LL) because that's where most of my classes were, and it's the one place on campus where many different languages are spoken from learners to native speakers.

A: I am proud to say that I have been accepted into Thunderbird School of Global Management's Master of Global Management program for fall 2018. I am looking forward to the "global mindset" education and the networking possibilities. After I went to Thunderbird's preview day and met so many people from all over the world, I knew that Thunderbird was the place that I wanted to complete my graduate degree. It has been a long journey from active duty to veteran, community college to university, and now going off to graduate school. I couldn't be happier with this decision, and look forward to making an impact as an international liaison and consultant and can increase my chances at becoming a polyglot.

A: With $40 million to solve one problem, I would want to assist the veteran community and tackle homelessness and mental health issues. These are some of the main issues plaguing the veteran community. I remember when I first got out of the service, it was difficult to reinvent myself and switch careers. I believed in my education and used my violin as a coping mechanism so that I could focus on making my educational aspirations come true. I want veterans out there to know that they are not alone and that there are positive outlets available to help with the transition from service to society.

Editor’s note: This is part of a series of profiles for spring 2018 commencement. Shawn Courson stands out among his fellow history majors due to his commitment to others and his education. Because of his accomplishments and engagement to ASU, he was chosen as the Dean’s Medalist for the School of Historical, Philosophical and Religious Studies.“He has worked tirelessly at ASU in the serv...

Shawn Courson stands out among his fellow history majors due to his commitment to others and his education. Because of his accomplishments and engagement to ASU, he was chosen as the Dean’s Medalist for the School of Historical, Philosophical and Religious Studies. 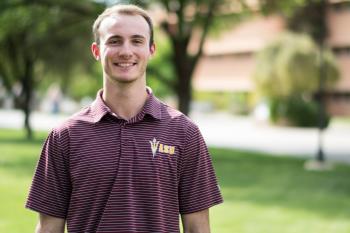 Shawn Courson will continue his commitment to serving others after graduation and move to Seattle as a member of Teach for America. Download Full Image

“He has worked tirelessly at ASU in the service of others,” said history Professor Calvin Schermerhorn, who nominated Courson for the medal. “I have taught many students with his potential but never one with that talent and determination focused on giving so much to others and to seek out those who might need his gifts and dedication the most."

Courson impressed his faculty and peers as he balanced teaching full-time at Tempe High School, earning top marks in his courses and working on his honors thesis that details the struggles of African-American political leaders in Texas after the Civil War.

He will continue his commitment to serving others after graduation and move to Seattle as a member of Teach for America.

Courson answered a few questions about his time at ASU, tips for current students and future plans.

Answer: I came into ASU as a math major, but I never felt a real passion for my studies during my freshman year. I began studying history and discovered a passion for learning about marginalized groups and cultures throughout U.S. history. I knew I’d be making a far more significant impact teaching the subject where my heart was truly at.

A: I learned how important it is to be an active participant in your environment. You will meet so many incredible people at ASU—the faculty, students and more. Open yourself up to others around you and form meaningful connections. You never know who might end up helping you land your next job or join you on your next adventure!

A: Coming from a small town in New York, I had been looking at several out-of-state universities from all different parts of the country. I was immediately drawn to ASU because of its beautiful campus, sports history and its unparalleled value for out-of-state students. I was also impressed by the incredible facilities and top-tier professors teaching at ASU.

A: College is so much more than lectures and assignments. Make the most of your ASU experience by getting involved — in classes and in extracurricular activities. The most rewarding and life-changing experiences I’ve had at ASU have stemmed from developing close relations with my favorite professors and from staying involved with ASU club sports for four years.

A: My favorite study spot on campus is in Hayden Library, on the second floor, tucked away behind the bookshelves at a row of individual desks positioned next to windows facing out towards campus. I read dozens of books and spent several months working on my thesis at this very spot.

A: After graduation, I will be moving to Seattle to combat educational inequity as a member of Teach for America, teaching high school history. I will also be pursuing a master’s degree in education at the University of Washington.

A: I wouldn’t be able to solve the problem, but if I had $40 million, I would invest it into struggling school districts with high percentages of students from low-income backgrounds. An investment into education practically pays for itself. Such an investment would update facilities, help secure necessary materials and technological tools, retain quality teachers and provide students with more out-of-school educational trips. All these additions would help retain students and better engage them with a more modernized learning environment. Investments into education pay great dividends as the students you invest in are put in a far better position to become high-achieving and successful outside of academics.