The Arizona State University-led NASA Psyche Mission is a journey to explore a unique metal world, and it is inspiring scores of artists along the way.

Earlier this month, a space mission-inspired art showcase was hosted at the ASU School of Earth and Space Exploration. Titled “Psyche Inspired,” the show featured original art from ASU students who have become an essential part of the Psyche Mission’s outreach goals. 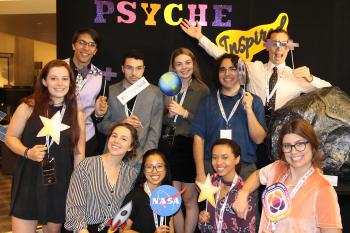 The student artists represent the inaugural class of “Psyche Inspired" interns, a pilot program developed at ASU to involve students from all disciplines in the Psyche space mission.

The ultimate goal of the outreach program is to share the excitement, innovation, and scientific and engineering content of NASA’s Psyche MissionPsyche, an asteroid orbiting the sun between Mars and Jupiter, is made almost entirely of nickel-iron metal. As such, it offers a unique look into the violent collisions that created Earth and the terrestrial planets. The Psyche spacecraft is targeted to launch in August 2022 and travel to the asteroid using solar-electric (low thrust) propulsion, arriving in 2026, following a Mars flyby and gravity-assist in 2023. After arrival, the mission plan calls for 21 months orbiting the asteroid, mapping it and studying its properties. The mission is led by Arizona State University. NASA’s Jet Propulsion Laboratory is responsible for mission management and navigation. The spacecraft’s solar-electric propulsion chassis will be built by SSL. through artistic and creative works.

“The whole afternoon was such a thrill — I loved the energy of the students, the engagement of the public, and most of all, the sheer talent and the excellence of the art,” said Lindy Elkins-Tanton, principal investigator of the Psyche mission and director of the ASU School of Earth and Space Exploration.

Each Psyche Inspired intern was expected to produce one work each month, inspired by an aspect of the space mission. They also had the freedom to collaborate and explore different genres and mediums, as long as it adhered to scientific accuracy.

Caralie Cedarleaf, a Psyche Inspired intern and ASU senior majoring in sculpture, said of her participation in the program, “I've noticed a change in how I relate to projects that are bigger than just one person. Before, I was hesitant to get involved in things, fearful that I didn't have enough to offer. Now, I engage with new opportunities with my assets and skills in mind, not worried about what I'm lacking. I've become bold.” 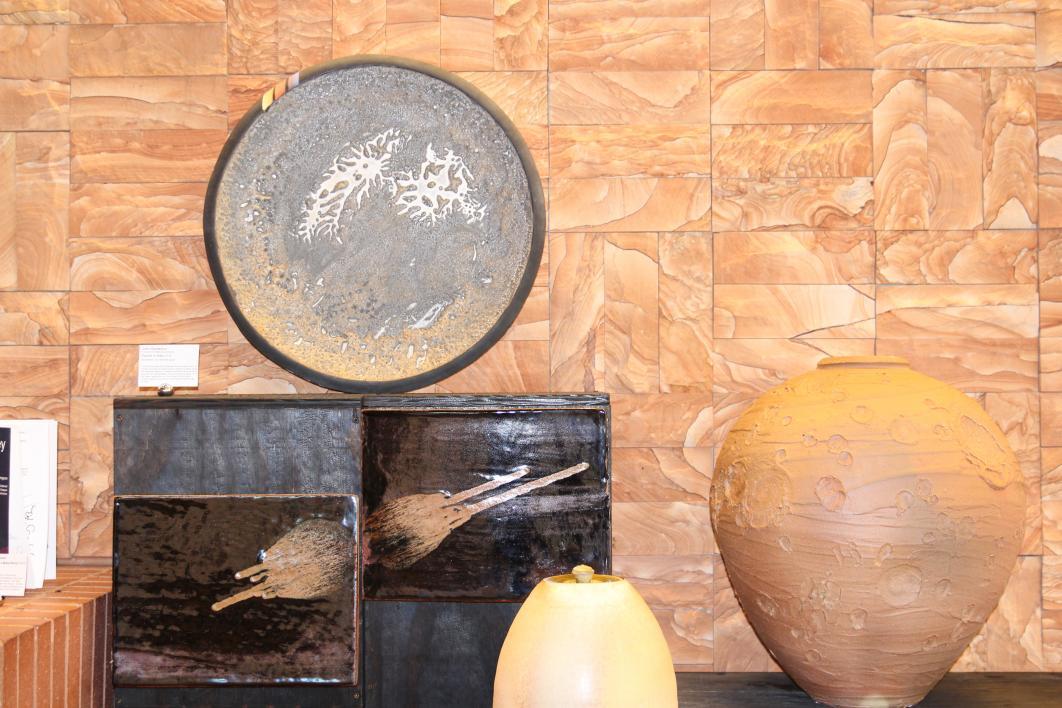 Throughout the internship, students learned about the Psyche mission by talking to NASA and ASU scientists and staff. The interns met weekly to talk about their projects, ask questions, receive feedback and collaborate.

“I’ve been amazed by the Psyche Inspired interns' curiosity in all arenas — from the science and engineering of the mission to the artistic techniques and genres they have explored,” says Psyche Mission co-investigator Cassie Bowman. “They have really pushed themselves to learn and develop.”

Students who completed the internship participated in the April showcase, which was open to the public. Interns talked about their experiences and creations, and a few even worked on projects to demonstrate their processes.

“People had multiple kinds of interactions with the pieces,” said Psyche Inspired intern and engineering management senior Kari Sanford, who wrote space-themed poetry during the showcase. “Everyone was challenged to find their own connection to the mission.”

In addition to being featured at the show, the original works are displayed throughout the year on social media, in an exhibit in ASU’s Noble Library, and featured on the Psyche Mission website. A coffee table book containing this year’s creations will be available this summer.

For the fall of 2018, the Psyche Inspired team will open the next round of applications nationally to any undergraduate student in the United States. A link to the application will be available on the Psyche website later this summer.

Someday, the team may even take the program to the international stage, allowing undergraduate students across the globe to be bolder in their own lives and share in the inspiration of scientific exploration.

Blake Elliott, a graduate student in the Department of Psychology at Arizona State University, has received a Graduate Research Fellowship from the National Science Foundation (NSF). The prestigious fellowship funds Elliott’s tuition and stipend for three years and provides research funds. Elliott uses magnetic resonance imaging (MRI) to study how connections within the brain contribute to what ...

Blake Elliott, a graduate student in the Department of Psychology at Arizona State University, has received a Graduate Research Fellowship from the National Science Foundation (NSF). The prestigious fellowship funds Elliott’s tuition and stipend for three years and provides research funds. Elliott uses magnetic resonance imaging (MRI) to study how connections within the brain contribute to what we remember.

It was a breakfast burrito that started Elliott on the path to wanting to know about connections between neurons, which are the cells that make up the brain, and human behavior. A track-and-field coach at his high school bought Elliott the burrito while talking about running competitively. 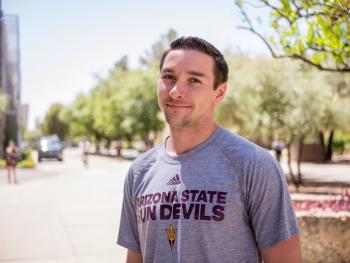 Blake Elliott, a graduate student in the Department of Psychology at ASU, will use his NSF Fellowship to study how memory works. Photo by Robert Ewing Download Full Image

“Success on the track changed my life. It motivated me to keep improving, which caused me to train harder and smarter,” Elliott said. “I began reading everything I could on kinesiology, exercise physiology, nutrition and sports psychology.”

Elliott’s love of running fast introduced him to science and eventually landed him at ASU as a star member of the track team and an undergraduate psychology student. Elliott finished his collegiate running career last year when he began working toward his doctorate in psychology.

“When I was an undergraduate student at ASU, I became interested in how we can remember things that are valuable to us,” he said. “As a graduate student, I decided to use MRI methods that measure brain activity and map brain pathways to look at how the brain tracks value and uses it when we remember.”

Brewer’s lab studies memory, and one area of focus is how the brain uses its limited resources to remember what is most relevant, important or useful.

“We cannot remember all the events and details of our lives,” Brewer said, “and we need signals that let us know something is important or relevant and is a priority to remember.”

Scientists think the dopamine system broadcasts signals in the brain that indicate an event or detail is valuable enough to remember. McClure’s lab studies the role of the dopamine system in decision-making by using mathematical models and by developing new human neuroimaging methods.

“Dopamine monitors how valuable something is to us. It tracks the value of everything, from cheeseburgers to abstract goals, and sends those value signals throughout the brain,” McClure said. “The goal of my work with Blake and Gene is to link the value signal to memory formation in the brain.”

“It is rare that you can find a link between a complex behavior, such as memory, and individual connections in the brain,” McClure said. “Pursuing this link is what makes Blake’s research innovative.”