Sports and college athletics experts gather for 'Field(s) of Dreams, If We Build It, Will They Come' panel

Sports and learning go hand in hand — or at least they should, according to several experts who spoke on a panel about athletics at the ASU + GSV Summit in San Diego on Wednesday.

Engaging in sports can teach a person about themselves and many lessons that last a lifetime, according to Michael Crow, president of Arizona State University, who was a wrestler and javelin thrower while a student at Iowa State.

“I learned the principle of working in an environment that was fair,” he said. “I was a guy who could win a couple of points for the team. You learn all of that was worth it even if you weren’t an NCAA champion or go to the Olympic trials.

“You were learning from people who were outperforming you. You could understand how to blend your life with all these other things, master the relationship between your body and your mind.”

“As a high school wrestler, in my senior year I weighed 220 pounds and wrestled people who weighed 350 pounds and were 6 foot 8. You have to figure out how to overcome the urge to flee,” Crow said.

Karen Crouse, a sportswriter for the New York Times, worries that overeager parents are trying too hard to specialize their children rather than letting them have fun. She is the author of the new book, “Norwich: One Tiny Vermont Town’s Secrets to Happiness and Excellence.”

“I was drawn to this town because here is a town of 3,000 people that has put 11 of its own on Olympic teams — but not in a sports-factory type of way,” she said.

“They look at sports as a way of instilling in their children life lessons and intrinsic benefits that will carry over into their adult lives — resilience, persistence, delayed gratification, teamwork, being coachable.”

Crow said that ASU tries to provide as many athletic opportunities as possible for its students — at every level.

“We have 24 varsity sports competing at the highest level, many at the Olympic level.”

Crow said that sports is an important part of American culture, but pressure from professional leagues is causing problems.

“This corruption going on around sports has been pro sports seeking athletes at the earliest possible age and funneling them through college — this ‘one-and-done' scam,” he said.

“College athletes should be college athletes. We should have agreements like we have with professional baseball that you can’t recruit athletes before their third year of college, and even then they should be allowed to finish,” he said.

Mark King, the president of adidas for North America, said he’s not sure he would have gone to college if he hadn’t gotten a golf scholarship.

“I think athletics gives people a chance to have a better life,” he said.

“We found out that 90 percent of the world’s professional athletes come from poverty. Sport has given them a chance to break out of poverty and do something meaningful for their communities.”

ASU and adidas have formed a partnership that has led to the Global Sport Institute and other initiatives.

“We have projects going on with ASU and other partners where we’re in search of the ‘perfect athlete,’” he said.

“We’re looking at an athlete’s mind, their capacity for oxygen, all the things that go into making an athlete.

"The outcome isn’t a new pair of shoes — it’s, 'How do you make the world a better place?'”

Top photo: Mark King, president of adidas North America, speaks during a panel discussion on "Field(s) of Dreams, If We Build It, Will They Come? Using Athletics as a Research Lab Featuring adidas," at the ASU + GSV Summit 2018 in San Diego on April 18, 2018. King was joined by ASU President Michael Crow; sportswriter Karen Crouse with the New York Times; and moderator Andrés Martinez, a Cronkite professor of practice.

In a famous social experiment a decade ago, a world-renowned violinist stood against a wall in a Washington, D.C., subway station and expertly played one of the most difficult pieces of music in history on a violin worth more than $3 million. Of the more than 1,000 people who walked by violinist Joshua Bell as he played that morning, only seven stopped to listen.Why were people unable to recognize...

In a famous social experiment a decade ago, a world-renowned violinist stood against a wall in a Washington, D.C., subway station and expertly played one of the most difficult pieces of music in history on a violin worth more than $3 million. Of the more than 1,000 people who walked by violinist Joshua Bell as he played that morning, only seven stopped to listen.

Why were people unable to recognize they were hearing world-famous music? 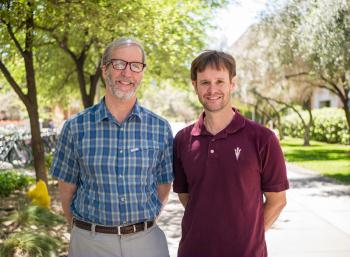 One answer is: context matters. A few days before he stood in the subway station, Bell played to a full theater in Boston, where the cheapest tickets were $100.

In a theater, people expect to see a world-famous violinist and hear excellent music. In a subway station, they do not expect Joshua Bell to be playing Johann Sebastian Bach’s “Chaconne” on his one-of-a-kind Stradivari violin.

Researchers in the Arizona State University Department of Psychology, along with collaborators from the University of Connecticut and the University of Arkansas, measured what was happening in the brain during a version of the Joshua Bell experiment. The findings from their study were published in the April 18 issue of Scientific Reports.

“We wanted to test whether having contextual information about a musical performance affected what people thought about the music,” said Göekhan Aydogan, a postdoctoral researcher in ASU’s Decision Neuroscience Lab, “And we wanted to see how the brain handled this information which was not directly related to the quality of the musical performance.”

In the experiment, participants listened to pieces of music that were just over a minute long while the researchers used functional magnetic resonance imaging (MRI) to measure brain activity. Before the music sounded, the researchers either told participants it was played by a student or a professional musician. This information gave the participants context about the music they were about to hear.

“Standard economic theory assumes that people are rational, and the contextual information need not be considered when deciding on the quality of the music,” Aydogan said.

“We found an attentional bias effect,” Aydogan said. “Measures of neural activity were higher in the auditory cortex for the entire time people were listening to music reportedly played by a professional.”

Half of the time, when the participants thought they were listening to music played by a professional, it was actually a student. This mismatch allowed the researchers to study how people were able to change their opinions about the music.

They found that an important part of the executive control network, the dorsolateral prefrontal cortex, played a central role in overcoming the initial bias people had from the information about who was playing the music.

“We found that people were biased based on the sensory input they received — the music they heard — and based on the activity we measured in the prefrontal regions, it appears that this bias was reduced when participants engaged in deliberative thinking,” said Srekar Nagishetty Ravi, a senior in the School of Biological and Health Systems Engineering who worked as a research assistant in the Decision Neuroscience Lab.

The researchers found that the strength of the connections between the prefrontal regions and other brain regions indicated how biased people were. Participants with weaker connections to the executive control network were more susceptible to context, or the information about whether a student or professional played the music, when assessing the quality of the music.

“There is very little research on what makes art or music beautiful,” said Samuel McClure, associate professor of psychology and head of the Decision Neuroscience Lab. “There are theories that suggest what artists do is discover by chance the principles of how our brains represent visual scenes or sound, and science has yet to define these principles.”

ASU researchers are now working to test such theories.

McClure recently joined an interdisciplinary group of ASU professors, lecturers and students who are all interested in the science of music perception. The researchers named themselves “The Science of Art, Music and Brain Activity” or SAMBA for short. They meet once a week at 3:14, in honor of pi, and are planning a series of neuroimaging experiments to map how people perceive music.

The idea for the SAMBA group came from Jeffrey Atchison, a post-baccalaureate student working toward a degree in psychology. Atchison’s first degree, also from ASU, is in music. He worked as a music educator in the Phoenix area before deciding to return to ASU.

“The more I taught, the more I had questions about how students processed music and interacted with musical concepts,” Atchison said. “I decided I had to try and understand the biological and neural mechanisms underlying how we perceive music.”

Atchison recruited his former mentor Joshua Gardner, clinical associate professor of music, to join him in the study of music perception.

“Music has been around for a very long time — some flutes date to 40,000 years ago — and is everywhere,” Gardner said. “The experiments we are planning will help us understand the cognitive processes that occur when we experience music as listeners or performers, which is interesting from a curiosity and pedagogical standpoint.”

Atchison also met with Michael McBeath, professor of psychology, and McBeath publicized and promoted the group. Additional members of the interdisciplinary SAMBA group include Xin Luo, assistant professor of speech and hearing development; Vaughn Becker, associate professor in the School for the Future of Innovation in Society; Jakob Patten, lecturer in psychology, and Seth Gory, an ASU music student. 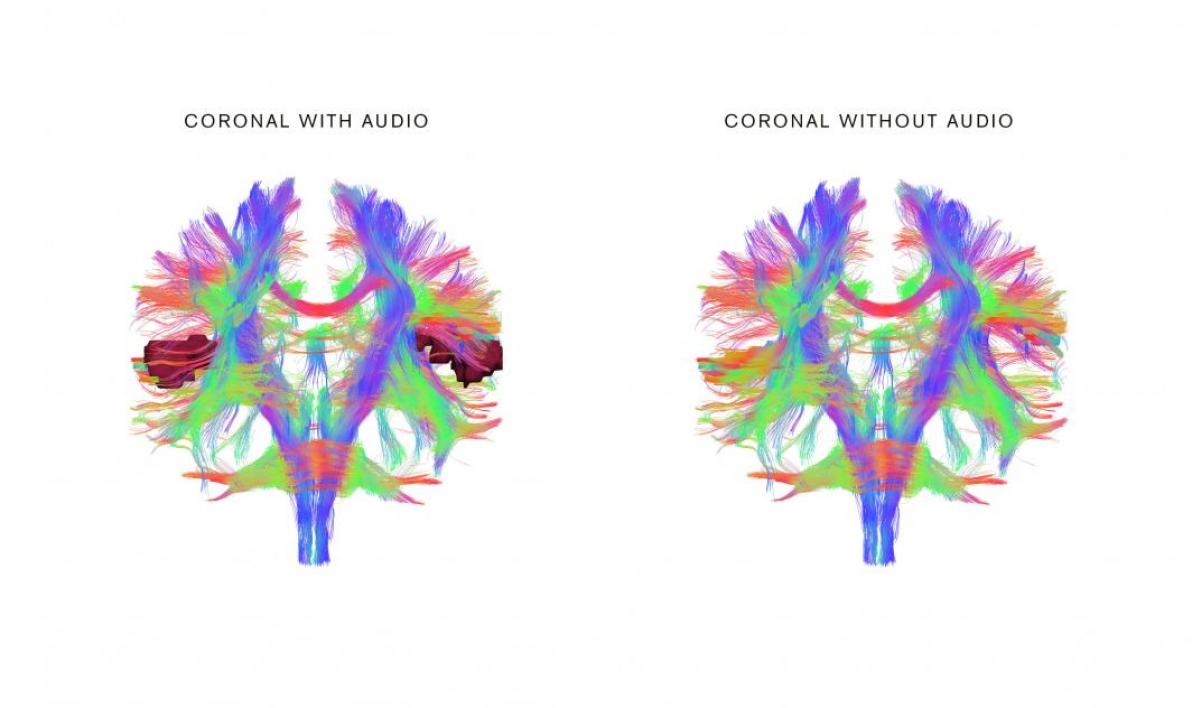 Connections among brain areas while listening to music. The auditory cortex is shown in ASU maroon. 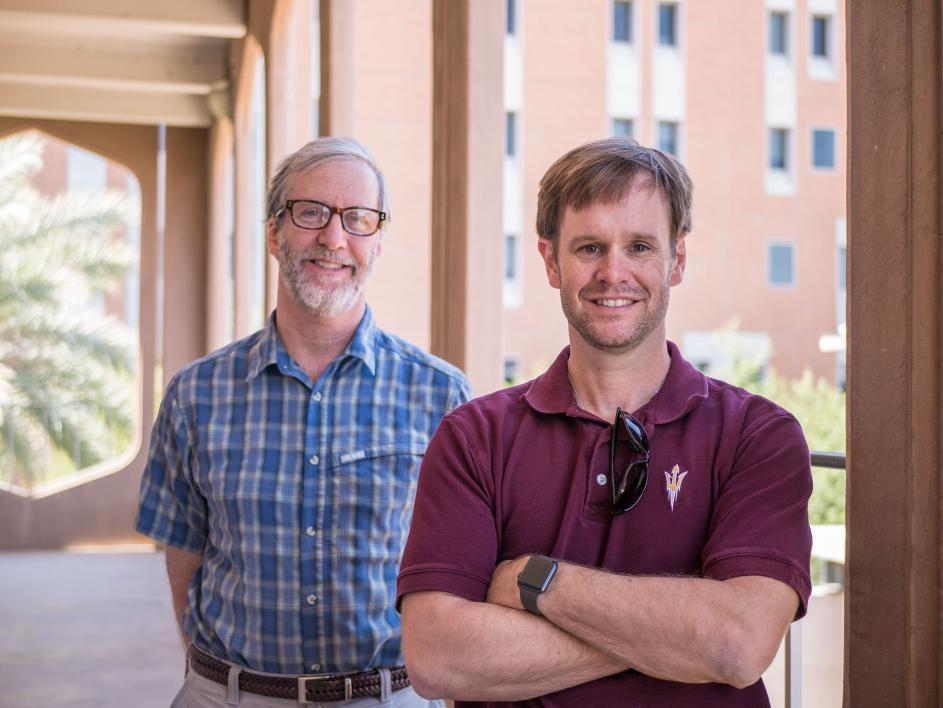 Sam McClure (right) and Mike McBeath head up the SAMBA project from the ASU Department of Psychology. 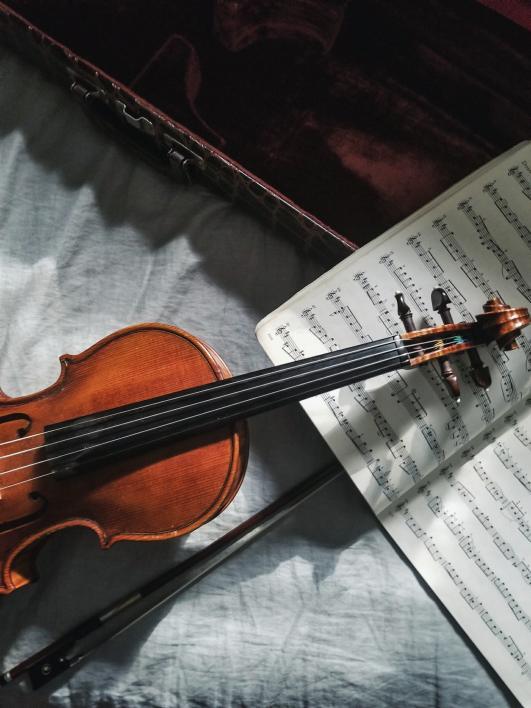 The famous social experiment of Joshua Bell playing a Stradivarius violin sparked the question: why were people unable to recognize world-famous music? Sam McClure and Michael McBeath have created an interdisciplinary superteam to find out: SAMBA.