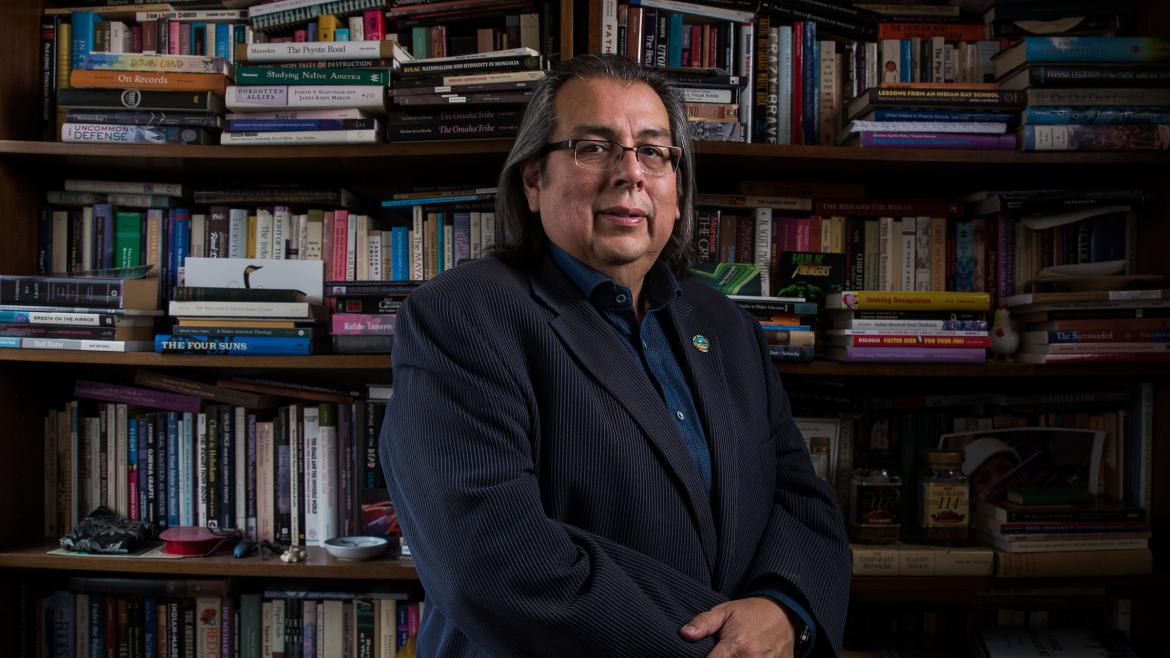 If you want to know something about scholarly activism and indigenous communities, the office of David Martinez would be a good place to start.

It’s the collective home of every book ever nominated for the Labriola Center American Indian National Book Award, now in its 10th year. (Check out a full list of Labriola book award winners.)

As chair of the selection committee, MartinezAkimel O’odham, Hia Ced O’odham, Mexican. has literally surrounded himself with a decade’s worth of research — as many as 200 books — by indigenous scholars, Native and non-Native, around issues of environmental justice, sexual violence, historical representation and tribal sovereignty.

“We get anywhere from 12 to 20 nominees each year,” said Martinez, an Arizona State University associate professor of American Indian studies, who was recruited in 2008 by ASU Foundation Professor Donald FixicoShawnee, Sac & Fox, Muscogee Creek and Seminole. and Regents’ Professor Peter Iverson to create a distinguished book award that honored scholarship in American Indian history and related fields.

At the time, there were few book awards within American Indian studies, but this has changed. From year to year, Martinez has seen a notable increase in opportunities for indigenous people-focused projects.

“Now more than ever, American Indian studies is relevant to the national discussion on democracy, which has come under assault. Nobody knows that better than tribal communities who have not always had their voices heard or counted toward policy decisions made on their behalf,” he said. “This is a time to pay attention to those voices.”

On the importance of visiting

Criteria for the Labriola book award emphasizes that the research be developed out of a meaningful relationship with the community on which it’s focused.

“The research must serve some need the community has, as opposed to research for the sake of research,” said Martinez, explaining that the idea stems from “our own intellectual history” — a standard set by Vine Deloria Jr., in his “Indian Manifesto” ("Custer Died For Your Sins," 1969), in which he criticized the social sciences for generating research that didn’t do the communities any good. “His belief was that work on Native communities must also work for Native communities.”

Deloria’s philosophy of socially embedded, use-inspired research — certainly a driving force at ASU — guided the work of Elizabeth Hoover in her 2017 book, "The River is in Us: Fighting Toxics in a Mohawk Community," this year’s winner of the Labriola award. 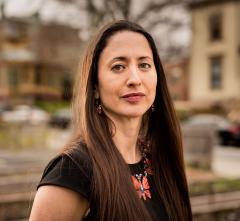 Hoover said the book came out of “kitchen-table conversations” with friends, workers, leaders and scientists in the remarkable upstate New York Mohawk community of Akwesasne, along the St. Lawrence River, who partnered up to develop grass-roots programs aimed at fighting environmental contamination and the threats it posed to their land, health and culture.

“There is something to be said for the importance of visiting and how it can impact a project,” said Hoover, the Manning Assistant Professor of American Studies at Brown University. “These slow-simmering conversations gave me the impetus for wanting to look at these health studies and how people were responding to them. I had friends working in a gardening group who made me want to think more about the impact of food and the way that contamination has these collateral impacts as well, such as concerns over exposure that cause people to avoid food.”

Hoover, the fourth consecutive Native American woman to receive the Labriola book award, says she wants people to find her work useful and for other Native communities to see what Akwesasne has accomplished.

“I want people to have this information and for other people to be inspired by this work, including scientists,” she added. “Some have written me to say they’re thinking about their work in a different way now.”

Martinez said Hoover’s book is an elegant example of a project that brings together the best in indigenous scholarship with the real-world needs of the community.

“Hoover is becoming one of the leading figures on the issues of food sovereignty and environmental justice for American Indians,” he said. “In the next five to 10 years, her work will be as important as Winona LaDuke’s.”

For most people, environmental crises emerged in the 1960s — but from an American Indian perspective, tribes have been deeply concerned about the impact of development on the environment since the first settlers appeared.

“The diverting of rivers and streams, the changing of non-farm land into farm land, the impact of mining and the railroads — Native people have always been alarmed by what’s going on,” Martinez said. “Hoover’s book represents an ongoing awareness among American Indians that the development that has been occurring in their lands since the time of colonialism has been creating this ever-going environmental crisis.”

In the face of such crises, the books that practically spill over the shelves of Martinez’s office are proof of indigenous resilience and, more importantly, resistance.

“It’s one thing to overcome the hardships that come with living in a colonial system,” Martinez said. “It’s another thing for those tribes to enact a political agenda that rebels against power and brings about real change.”

You can learn more about Hoover and her book at a special reception and Q&A session, hosted by ASU Library’s Labriola Center, from 3 to 4:30 p.m. Tuesday, April 24, in C2 of Hayden Library.

Top photo: David Martinez poses for a portrait in his office at Discovery Hall on the Tempe campus. Photo by Deanna Dent/ASU Now

Year in review: ASU + GSV Summit wraps up with focus on transformative powers of education

Editor's note: This story is being highlighted in ASU Now's year in review. Read more top stories from 2018 here.Mexico has progressed rapidly over the past generation thanks to better education, according to Vicente Fox, a businessman and the former president of Mexico.Fox, who served from 2000 to 2006, delivered the final keynote address Wednesday at the ASU + GSV Summit in San Diego, an even... 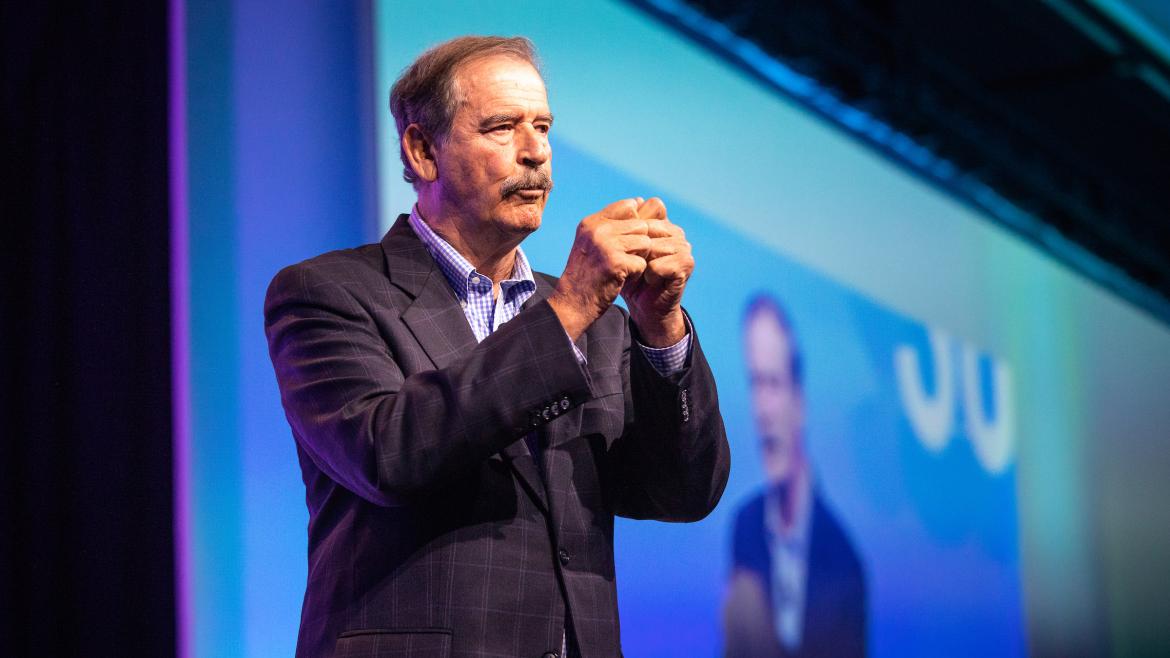 Mexico has progressed rapidly over the past generation thanks to better education, according to Vicente Fox, a businessman and the former president of Mexico.

Fox, who served from 2000 to 2006, delivered the final keynote address Wednesday at the ASU + GSV Summit in San Diego, an evening that focused on education’s power to transform and featured Hollywood star power in the form of Matthew McConaughey speaking about his student-focused foundation.

READ: More of the highlights from the ASU + GSV Summit on our blog.

But before the Oscar winner took the stage, Fox spoke of his admiration for teachers.

“The great thing about teachers is that they’re molding the people around them,” he said.

“To me, the best aspirations of a human being is doing for others, so teachers are transmitting your personality, your capacity, your skills, your heart and your soul to other human beings.”

Fox also spoke in support of the NAFTA trade agreement.

“When NAFTA started, the gap in income between Mexico and the U.S. was tenfold. You’d make one dollar on the Mexico side and if you crossed over, you’d make 10 dollars.

“Who of you would not go for that powerful incentive?” he asked.

The speaker before Fox was Andrea Mondragón-Rodriguez, who was brought from Mexico to Chicago as a toddler by a mother who believed that education was the key to a good life.

Andrea Mondragón-Rodríguez, a junior at Ohio's Denison University and a DACA "Dreamer," delivers the opening remarks Wednesday evening, speaking of the support she has received from the public, university and politicians to allow her to finish her schooling and make her school a sanctuary location. Photo by Charlie Leight/ASU Now

“As a DACADeferred Action for Childhood Arrivals (DACA) is a program implemented during former President Barack Obama's administration that allows young immigrants living in the country illegally who were brought here as children to remain in the U.S. Those young immigrants are often referred to as "Dreamers," based on congressional proposals called the DREAM Act that would have provided similar protections had they passed. 'Dreamer,' mapping my future has not been an easy task,” she said.

Fox said that much has changed in Mondragón-Rodriguez’s lifetime.

“What happened 25 years after, the lifespan of Andrea, is that income gap reduced to five to one. That’s why you see the reverse trend of Mexicans going back to Mexico and reducing those coming to the U.S.

“There is only one way you can change a nation in one generation, and it’s through education. This is what happened to Andrea,” he said.

Mondragón-Rodriguez believed college would be out of reach despite her 4.0 grade-point average in high school.

“My dream was to attend Denison University, and I had all but written off the possibility of going there due to cost,” she said.

Then she won a four-year full scholarship.

“I keep rising to the occasion. One of my first projects was to have Denison declared a sanctuary school. During the meeting I found out I was the first and only DACA student enrolled at Denison,” she said.

She also organized a peaceful demonstration of unity for DACA students and worked with Amnesty International.

“I have found my voice, and it continues to get louder every day,” she said.

“I am a dreamer that still believes in the dream.” 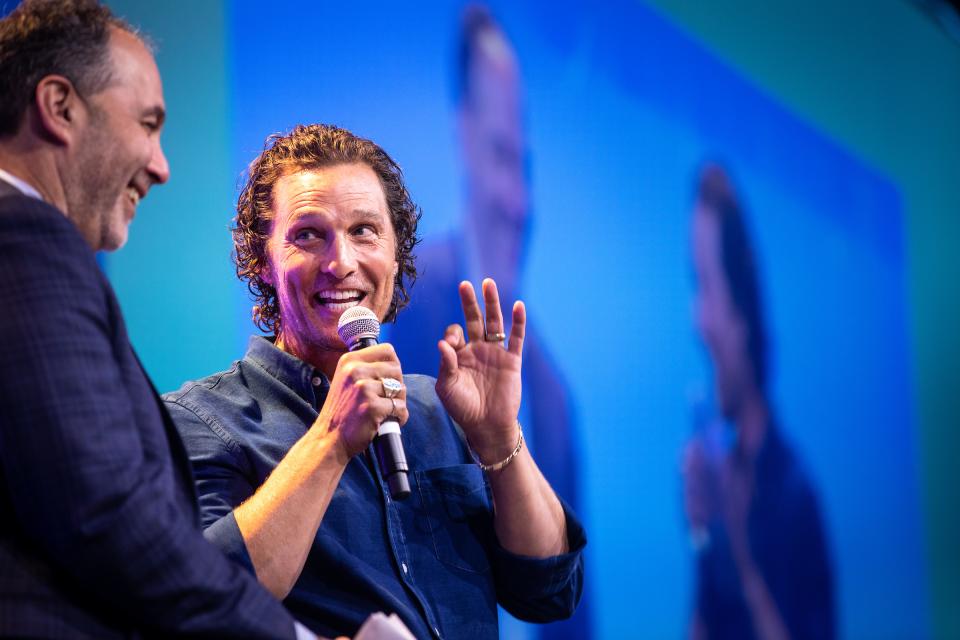 Academy Award winner Matthew McConaughey has a fireside chat with Dan Rosensweig, CEO of Chegg, Wednesday evening at the ASU + GSV Summit 2018 in San Diego. The actor spoke of the Just Keep Livin' foundation that he and his wife created, dedicated to empowering high school students by providing them with the tools to lead active lives and make healthy choices for a better future. Photo by Charlie Leight/ASU Now

Also at Wednesday’s keynote, Dan Rosensweig, CEO of Chegg, sat down with Academy Award winner Matthew McConaughey to discuss the mission of his foundation, Just Keep Livin’. The organization was founded by McConaughey and his wife, Camila Alves, 10 years ago to empower high school students by providing them with the tools to lead active lives and make healthy choices.

To date, 2,500 students have gone through the program, which is currently in 31 Title I schools in five states. Throughout the program, students are encouraged to make positive life choices to improve their physical and mental health through exercise, teamwork, expressing gratitude, nutrition and community service.

On the program’s community service component: “They find ownership in the program. They like the accountability and having responsibility that they have to give back as well.”

On resilience: “We’re sitting in a privileged position up here right now. I know in my own life, getting up and proverbially dusting yourself off, to say no, it’s not the end, it’s not over, this game of life is not over, is a very important trait. Essential trait, to have you succeed in whatever you do.”

Written by Mary Beth Faller and Katherine Reedy. Top photo: Former Mexico President Vicente Fox delivers the keynote address Wednesday evening at the ASU + GSV Summit 2018 in San Diego. He spoke about his country's embracing education as a way to advance its people and broaden the middle class. Photo by Charlie Leight/ASU Now